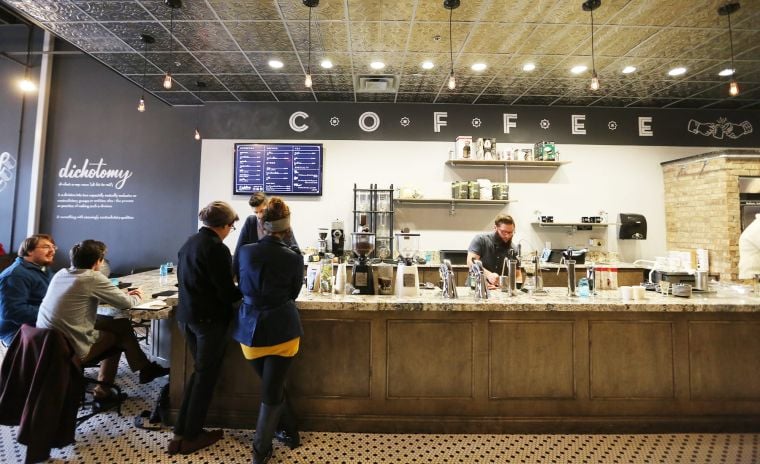 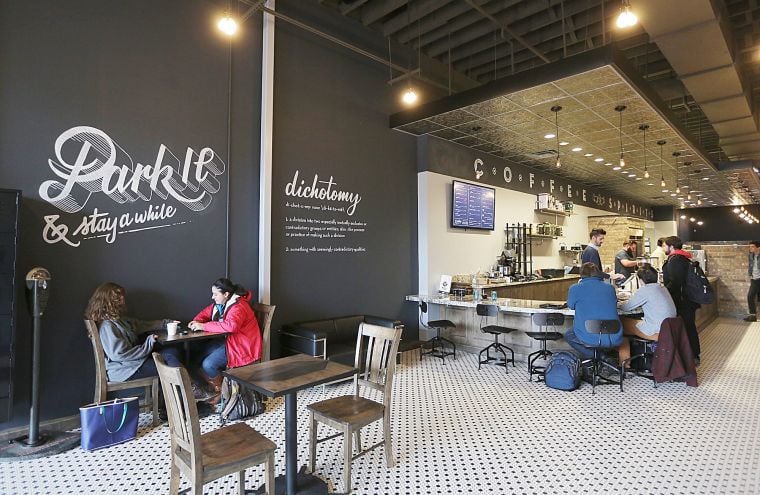 With its combination of fresh joe and relaxing atmosphere, Dichotomy Coffee & Spirits opened Monday at 508 Austin Ave., a hideaway between Bank of America and the former Hub Clothiers building that stands vacant but is attracting lookers.

“We’ve had a better turnout than I expected,” Dichotomy proprietor Brett Jameson said during a late-afternoon interview.

He had planned his unveiling the week of Thanksgiving, knowing a considerable number of Baylor University students would have gone home for the holidays.

“We wanted a little time to work out the kinks,” said Jameson, who, with business partner Alina Mikos, has created a devoted following for Dichotomy.

They made a splash at the Waco Downtown Farmers Market, where they continue to sell coffee on Saturday mornings.

They moved into Croft Art Gallery, 712 Austin Ave., prospering there until relocating this week to 3,500 square feet a couple of blocks away.

Dichotomy now has room for 100 patrons inside and 40 more on its rooftop deck, which provides a chilly, coffee-friendly atmosphere this time of year, Jameson said.

“We will serve coffee until closing time, unlike some places that sell both coffee and alcohol,” Jameson said.

The spirit line will include craft cocktails, wine, beer on tap and bottled, and 1-ounce servings of Baby Blue, Single Malt and Brimstone whiskey from Waco-based Balcones Distilling. Jameson said he hopes to broaden his whiskey offerings if and when he can secure more product from the award-winning distillery.

“We also would like to have tastings, as we have developed a good relationship with them,” he said.

While Dichotomy opened Monday, Croft Art Gallery shut its doors on Austin Avenue. Owner Katie Croft said she will relocate to the historic Percy Medicine building at South Eighth Street and Webster Avenue, where she will have 12,000 square feet for artists to create and display their artwork beginning in January.

Jameson wants to continue his relationship with Croft Art Gallery, saying, “I would like to put a cart in there.”

You could be getting an IRS letter about child tax credit payments too.

Crypto Is Crashing: Should You Invest Now?

Right now could be a smart time to buy the dip, but crypto isn't right for everyone.

The 10 Hottest Housing Markets for 2022, According to Zillow

Three cities in sunny Florida made the list, and there are two apiece in Texas and North Carolina.

Microsoft is buying the gaming company Activision Blizzard for $68.7 billion, gaining access to blockbuster games like "Call of Duty" and "Candy Crush."

3 Reasons It Pays to File Your Taxes Early in 2022

This isn't the year to procrastinate.

Why Hasn’t Joe Biden Forgiven All Your Student Loan Debt? Short Answer: He Never Promised To

Here’s what Joe Biden actually promised to do for student loan borrowers.

Making Money With NFTs Without Owning One

The NFT market can provide an extra form of income in 2022.

Social Security Benefits Get a 5.9% Raise This Year -- Here's When You Should See That Extra Money

Many seniors are eager to see their incomes rise. Here's when this year's cost-of-living adjustment takes effect.