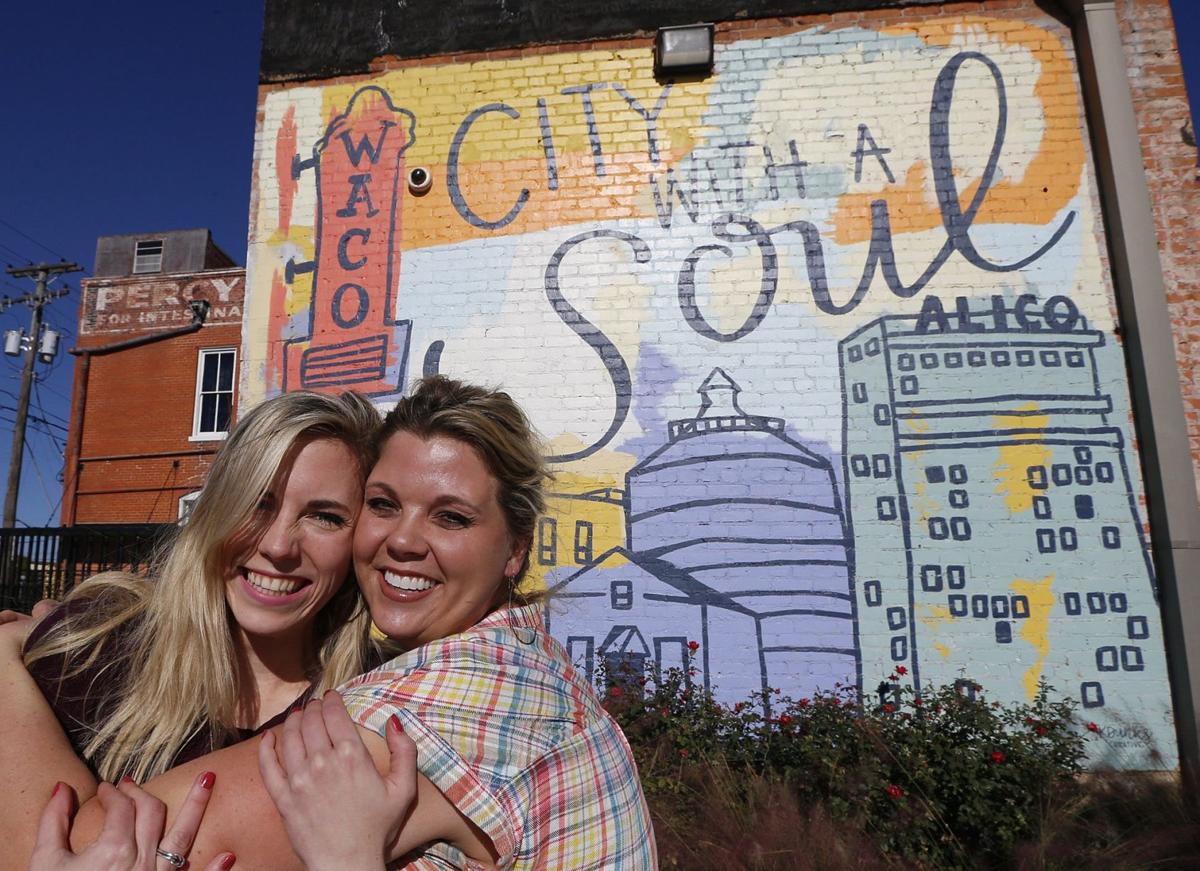 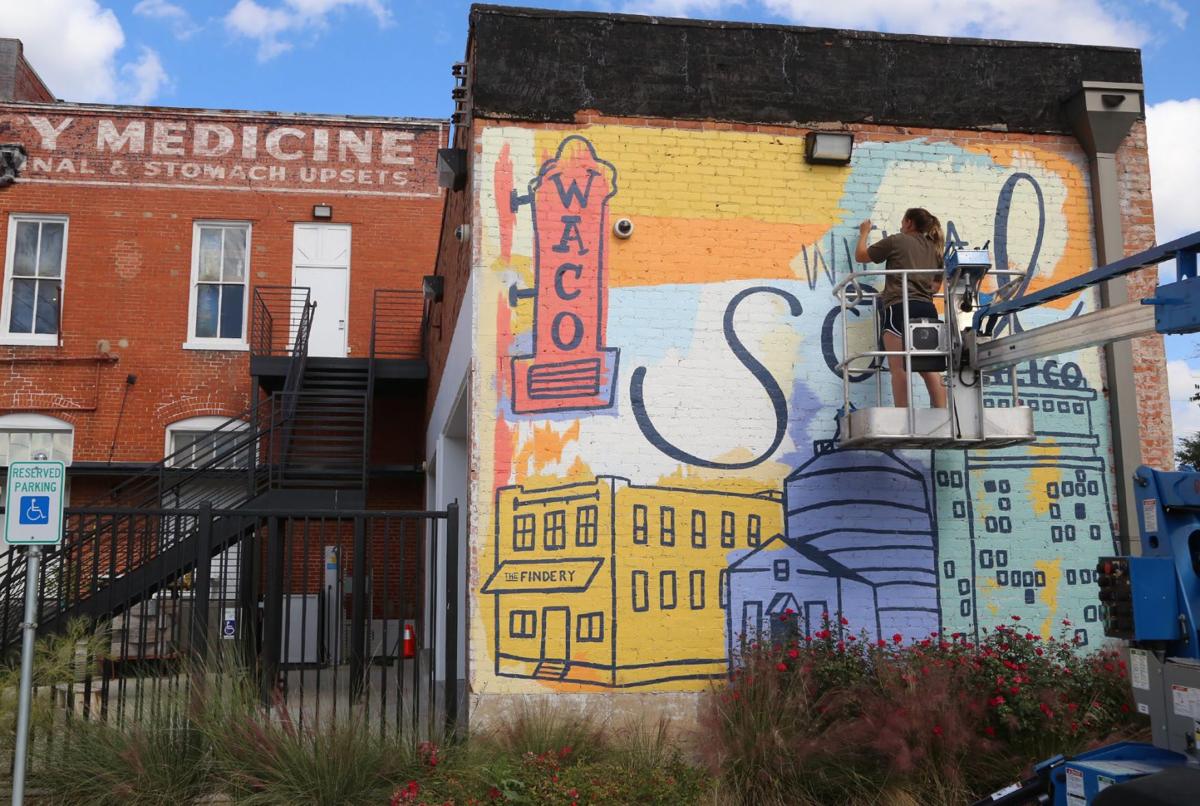 Kalyn Dunks, a Baylor University and Midway High School graduate, works on the mural behind The Findery on Nov. 1. 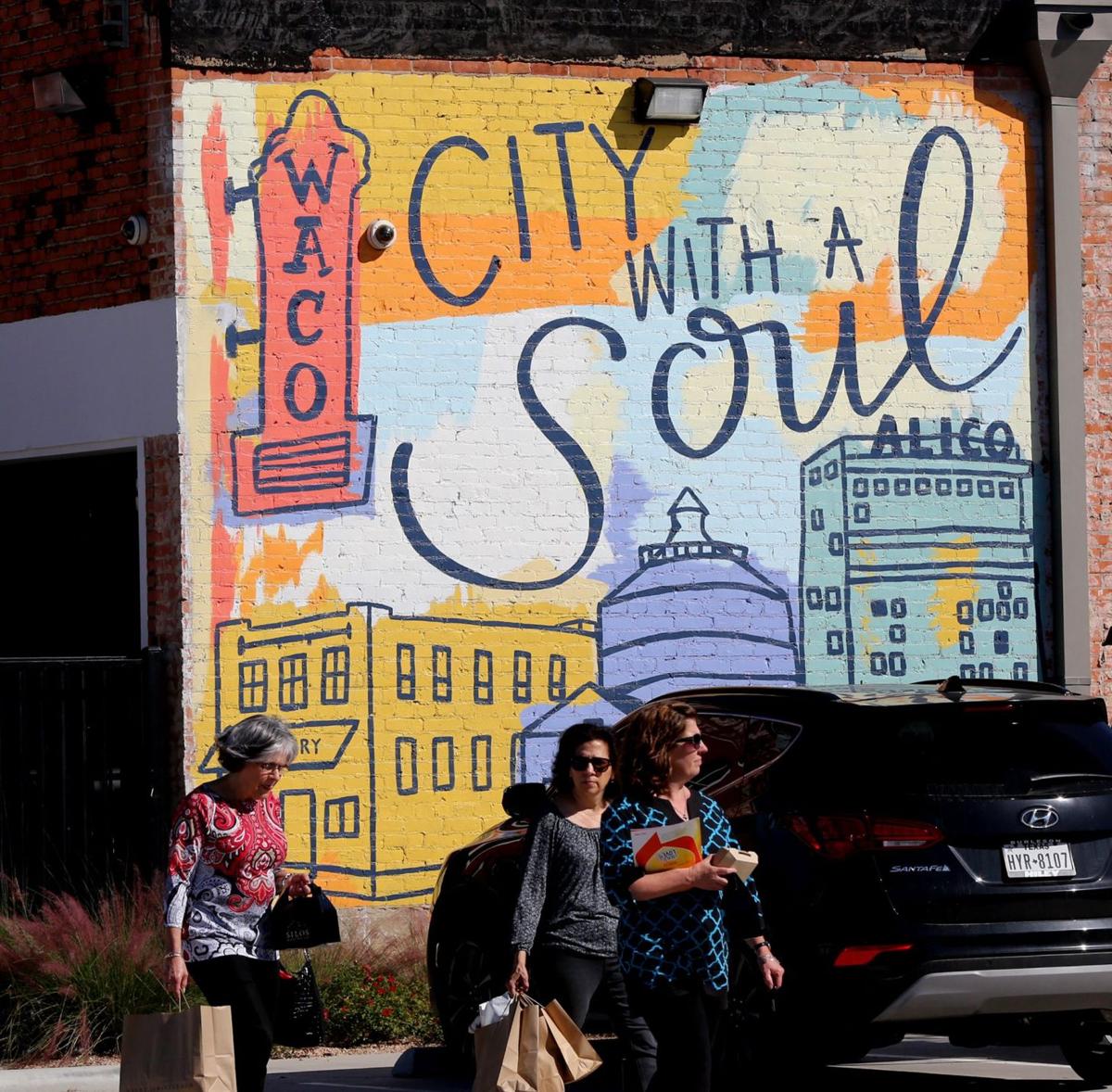 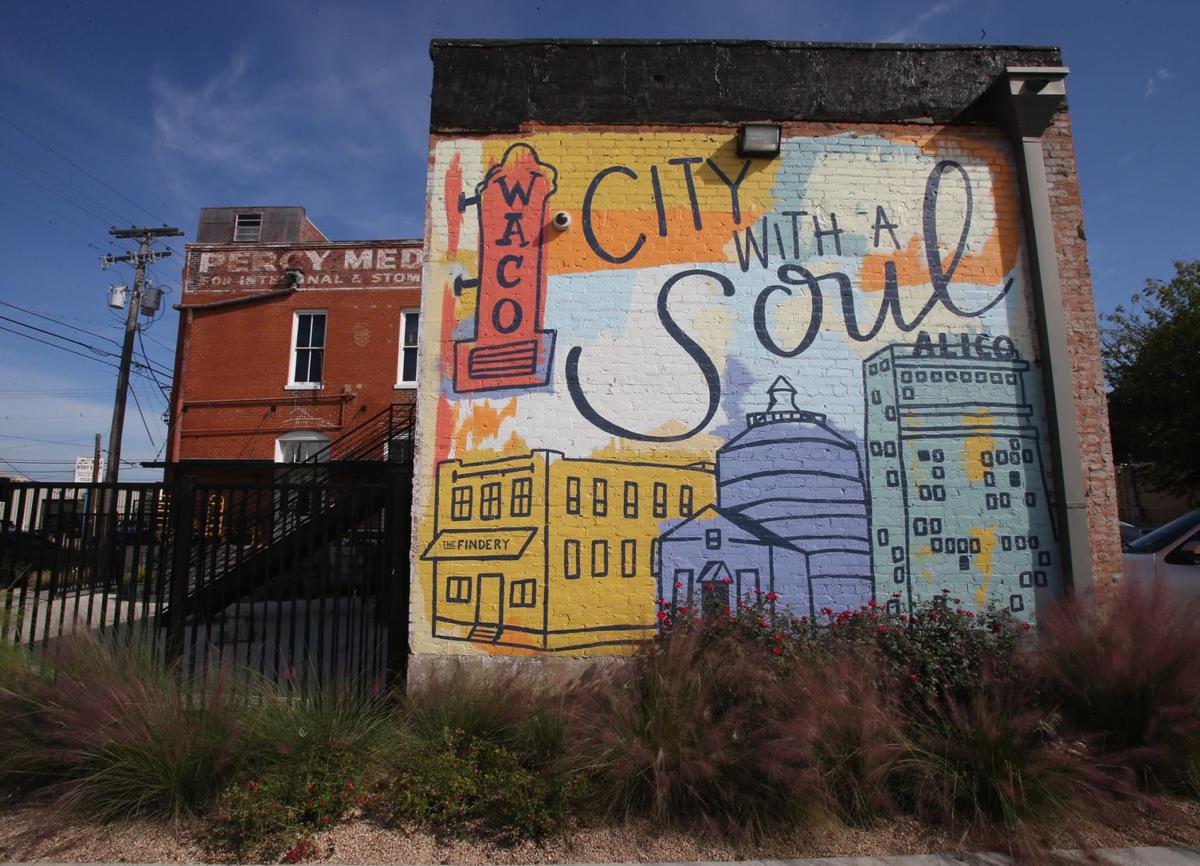 The Findery changed the phrase on its mural after a graphic designer claimed he has the trademark rights to the original phrase, “Waco Feels Like Home.” 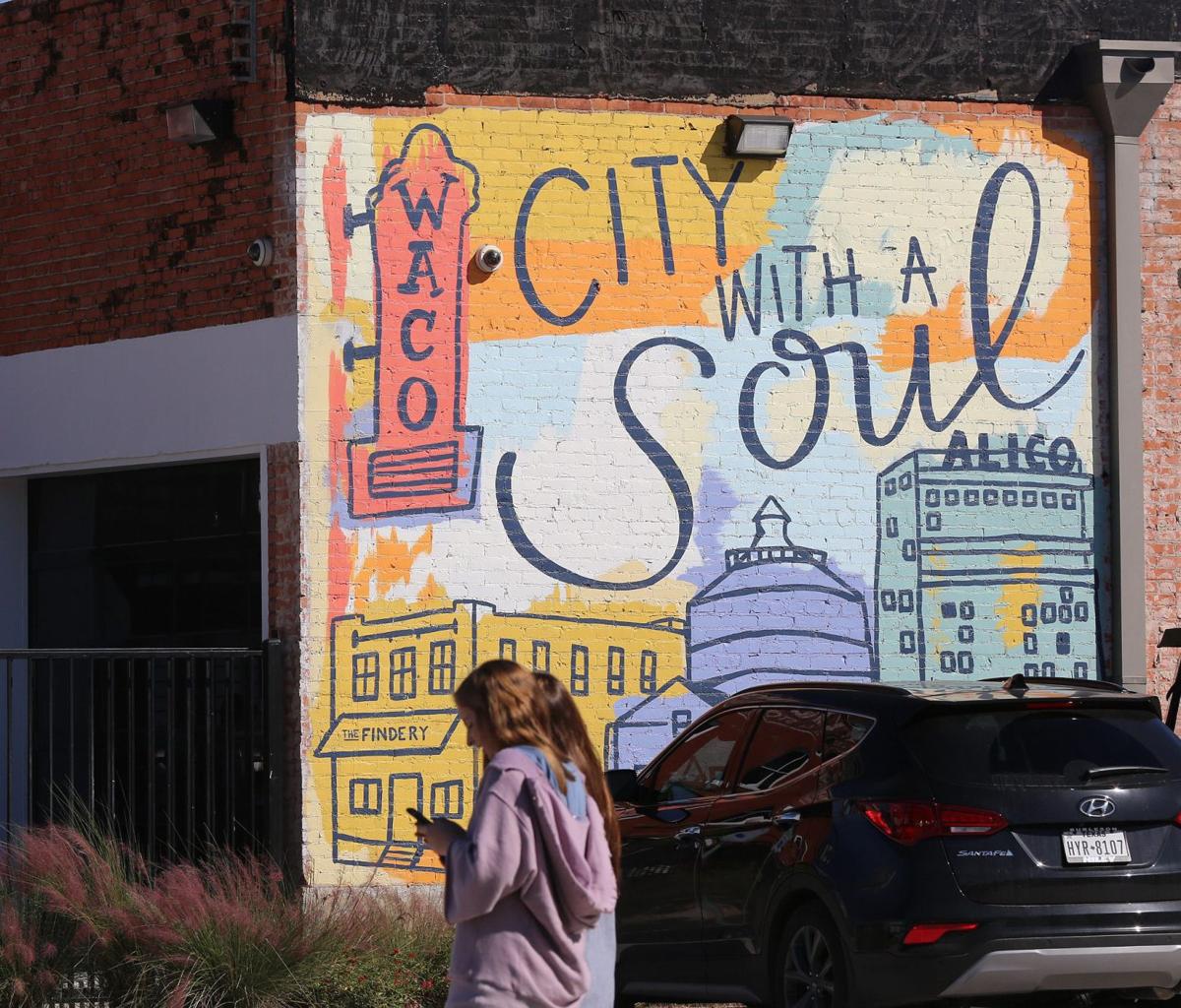 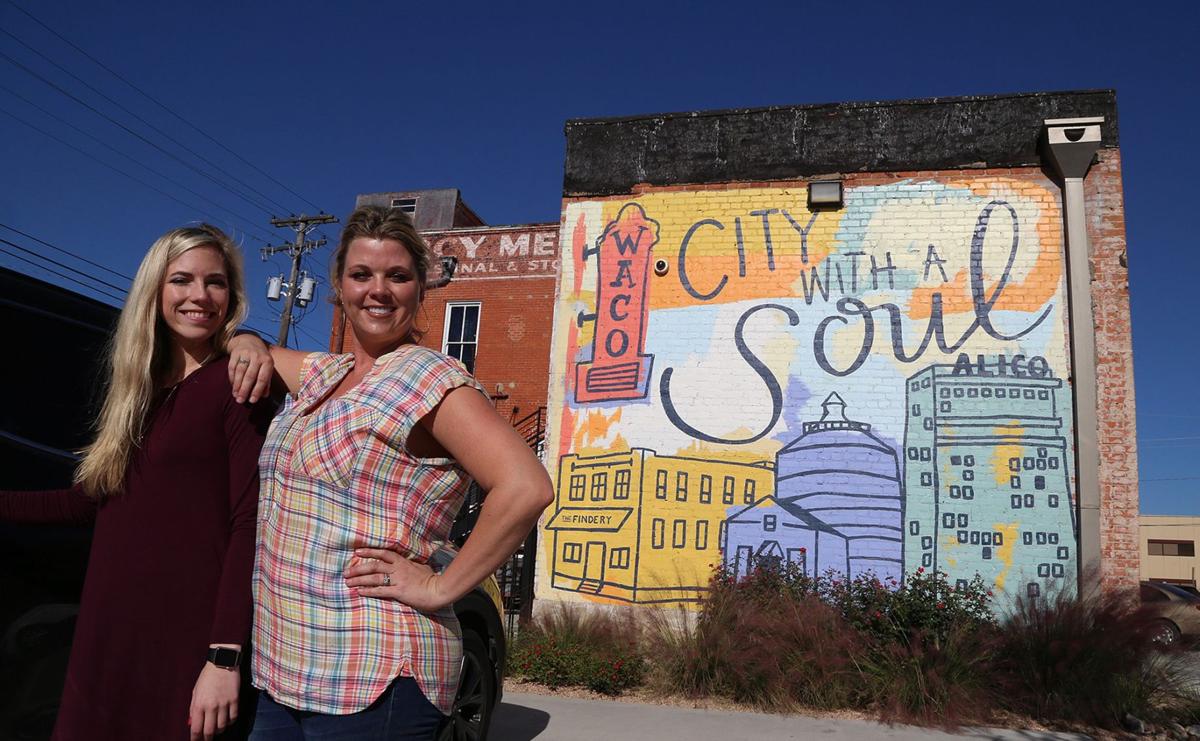 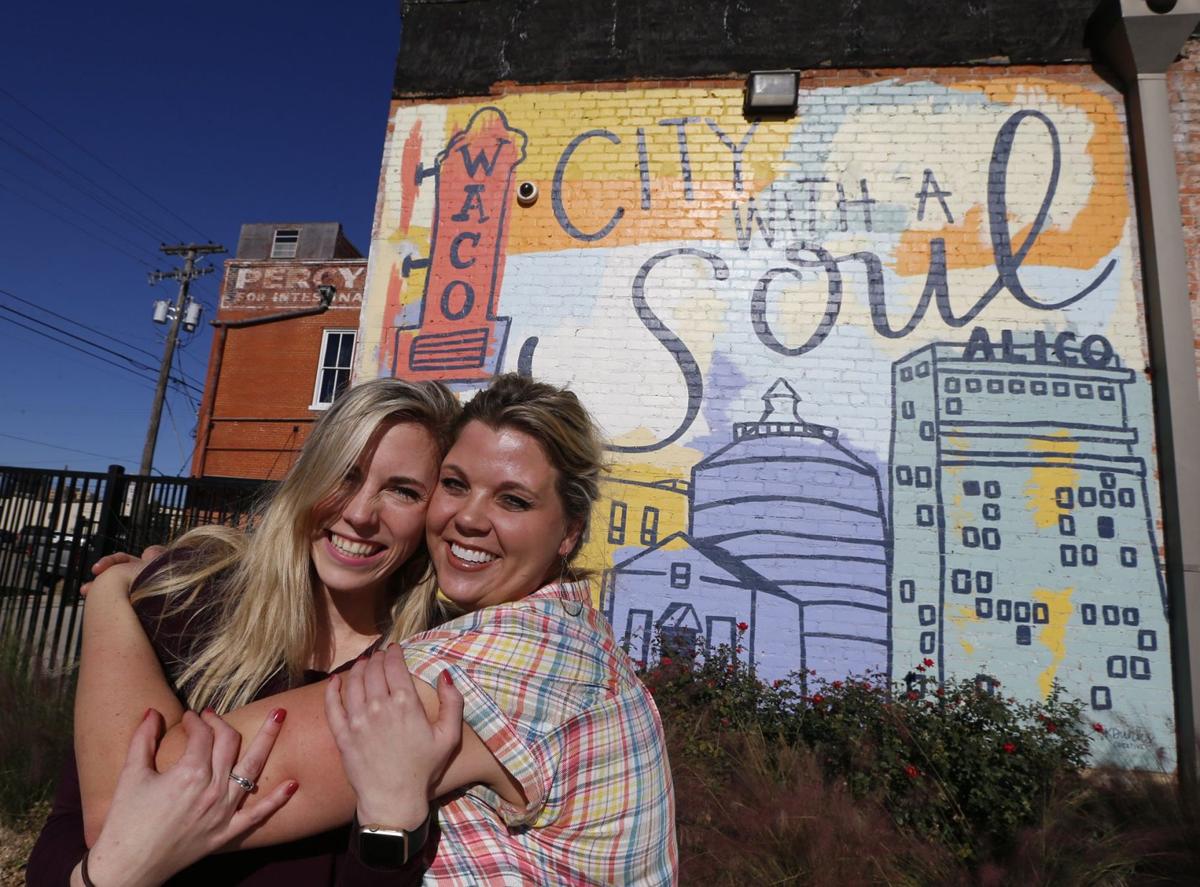 The shelves at The Findery in downtown Waco will soon display merchandise mirroring a revised mural outside, after a trademark dispute prompted the company to add a little soul.

The colorful mural on the back side of the former Percy Medicine building at South Eighth Street and Webster Avenue that once read “Waco Feels Like Home” now reads “City With A Soul.”

Co-owner Tiffany Fatheree said she wanted a message with feeling to put on the building.

“Everything else was just kind of ‘blah’ that we came up with. It didn’t have any soul behind it,” Fatheree said. “I think it’s been fun to hear other people’s perspectives on what that saying means to them.”

Fatheree said she was sad to see the original wording replaced. She said operators of the downtown antiques and home decor store were not interested in being in a cat fight with anyone, and they never set out to steal or hurt anyone.

“I wish the whole thing was handled differently,” she said.

Kalyn Dunks, a Baylor University and Midway High School graduate, recently completed a revision of the mural depicting the Waco Hippodrome, the Magnolia Silos and the ALICO building.

Former Waco resident Mark Rockwell and The Findery each had filed trademark documents for the phrase “Waco Feels Like Home.”

Rockwell started selling shirts with the phrase in Waco in 2012, which can still be purchased at wacofeelslikehome.com. When he caught wind of the new Waco mural, conversations started between him and the company.

It wasn’t until the mural was complete that the company learned anyone had laid claim to the phrase, Findery spokeswoman Shelby Pipken said.

The dispute spilled over into social media, and the Findery opted to end the fight by changing its mural.

After the Tribune-Herald published a story on the decision to change the mural, the company immediately started receiving calls from people offering suggestions for a replacement phrase, Pipken said.

She said they were forwarded eight news articles from the early 1900s describing the city of Waco as a city with a soul.

“I read all of these articles and immediately just fell in love with that phrase,” Pipken said.

She said one of the articles published in the Waco Morning News Jan. 2, 1915, included a poem by former resident Herman E. Morris.

“I love a virgin city ‘with a soul;’ Responsive to an altruistic call; Among her fond admires I’d enroll; And urge a ‘Greater’ Waco to her goal,” the poem reads.

“We were kind of like, ‘Oh, that totally speaks to right now, to how the community is being brought together,’ ” Pipken said.

She said another article that spoke to her discussed how there were no rent homes in Waco in the early 1900s because people wanted to buy a home and plant their roots in the area.

A similar resurgence is occurring in Waco today, she said.

In a March 27, 1981, story in The Waco Citizen about a prayer breakfast, Lyndon Olson Sr., then president of the Greater Waco Chamber of Commerce, recalled Waco’s establishment in 1856 and its four nicknames since: Six Shooter Depot, Athens of Texas, Geyser City, and then, City With a Soul.

The phrase “Home away from home” was considered, but the group determined that was aimed too much at visitors and they wanted something inclusive, Pipken said.

Pipken said the owners of the Findery want anyone who enters the store to feel appreciated and cared for and to walk out of the building feeling peaceful and loved.

“We’ve seen a lot greater feedback from the new mural just in terms of people being really supportive,” she said. “It’s been good.”

Pipken said since the initial trademark filing, the company has refiled for a trademark on its new mural. She said the mural’s design and new phrase will be included on merchandise set to hit the shelves in two weeks.

Fatheree said she also appreciates the new wording because it speaks to the area’s history.

”It’s about Waco and the people we want to serve,” she said.

Kalyn Dunks, a Baylor University and Midway High School graduate, works on the mural behind The Findery on Nov. 1.

The Findery changed the phrase on its mural after a graphic designer claimed he has the trademark rights to the original phrase, “Waco Feels Like Home.”