Three arguably wise families from Bryan-College Station are bringing Christmas cheer and more than 1 million lights to the community of West, establishing a drive-thru wonderland just off Wiggins Road that will open Friday.

Visitors from all over Texas may follow the glow to the 50-acre site 9 miles from Waco. The West Chamber of Commerce hopes the Lights of West attraction brings good tidings and attention to a community, like others around the country, needing something to enjoy as a family amid COVID-19 concerns.

Families are invited to pose for pictures with the 20-foot Big Santa figure that greets visitors, and kids may complete their Christmas wish on a provided template, then mail the list to the North Pole using an on-site mailbox.

The proprietors discovered Big Santa on Facebook, having been put out to pasture by a Christmas tree farm in Fort Worth. Research revealed this particular Santa probably was crafted by a Michigan firm, Bronner’s, probably in the 1950s. New ones are available today for about $17,000, according to the Lights of West website.

“The Lights of West families had a restoration party, and all 13 family members repaired and painted the old giant,” the website states.

Admission is $35 for vehicles with up to eight passengers and $55 for vehicles carrying nine to 15 passengers. Hours are 6 to 10 p.m. Sunday through Thursday and 6 to 11 p.m. Friday and Saturday. The park is visible from Interstate 35.

Visitors driving through the park will “experience a winter wonderland, Santa Claus and his elves, a Texas experience and a truly meaningful faith journey as you travel around two lakes and back to a 100-foot-long antique Christmas train,” according to the website.

The process of setting up the attraction lasted more than a year and involved several members of three families, including Brad Luedke, a College Station resident originally from Axtell who found the property, said Courtney Dodd, one of the family members behind the project.

The team ordered merchandise “from Walmart, from China, from the UK, all kinds of different places and suppliers,” Dodd said. “Some things ordered in January didn’t get here until after summer.”

Restrictions associated with the pandemic have hindered progress on several fronts, but they have been able to stick to their timeline, and all systems are go for the season, she said.

“When COVID hit, our lives slowed down,” she said. “It gave us an opportunity, more time to build the park. We had plans to debut this year, so the timing has not changed, but we know people are wanting to get out of the house. The park should be entertaining, but in a safe way.”

Much of how the park will perform remains a mystery.

“This being the first year, we really don’t know what to expect in terms of numbers,” Courtney Dodd said of projected traffic counts. “We do expect to have people from all over checking us out, but we want people from the local communities definitely to take advantage of this opportunity.”

She said the Bryan-College Station area has a large lighted Christmas venue, Santa’s Wonderland, that proved instructive as the team formulated strategies for its attraction in West, including setting prices. The families even took fact-finding excursions to holiday displays statewide.

Fortunately, she said, her husband’s day job is in construction. He’s employed by a Houston-based company specializing in water treatment plants.

“He pretty much can build, create or fix anything,” she said.

Creating a drive-thru lighted park “was right up his alley.”

Fred Dodd, speaking by phone from the light site, said he would rather not say how much he and other team members have invested monetarily.

“The most difficult part probably was putting in a mile of underground electrical and plugs every hundred feet,” he said. “We were able to do 75% of it ourselves, under the guidance of an electrician.”

The light display should prove beneficial to businesses away from I-35, West Chamber of Commerce President John Kocian said.

“Maybe visitors will decide to stop in town, check out the downtown area,” Kocian said. “Because of COVID, we’re pretty limited on celebrations this year. About 30 homeowners have decided they want to go through with our traditional ‘deck the lawns’ contest, and some downtown merchants will bring Santa to town, though we can’t sponsor that as an organization.”

But the drive-thru lighted park is the cherry on the sundae.

“The timing is right for it,” Kocian said. “Get out with the family, load up in the car and experience a little Christmas cheer when we’re going through so much.” 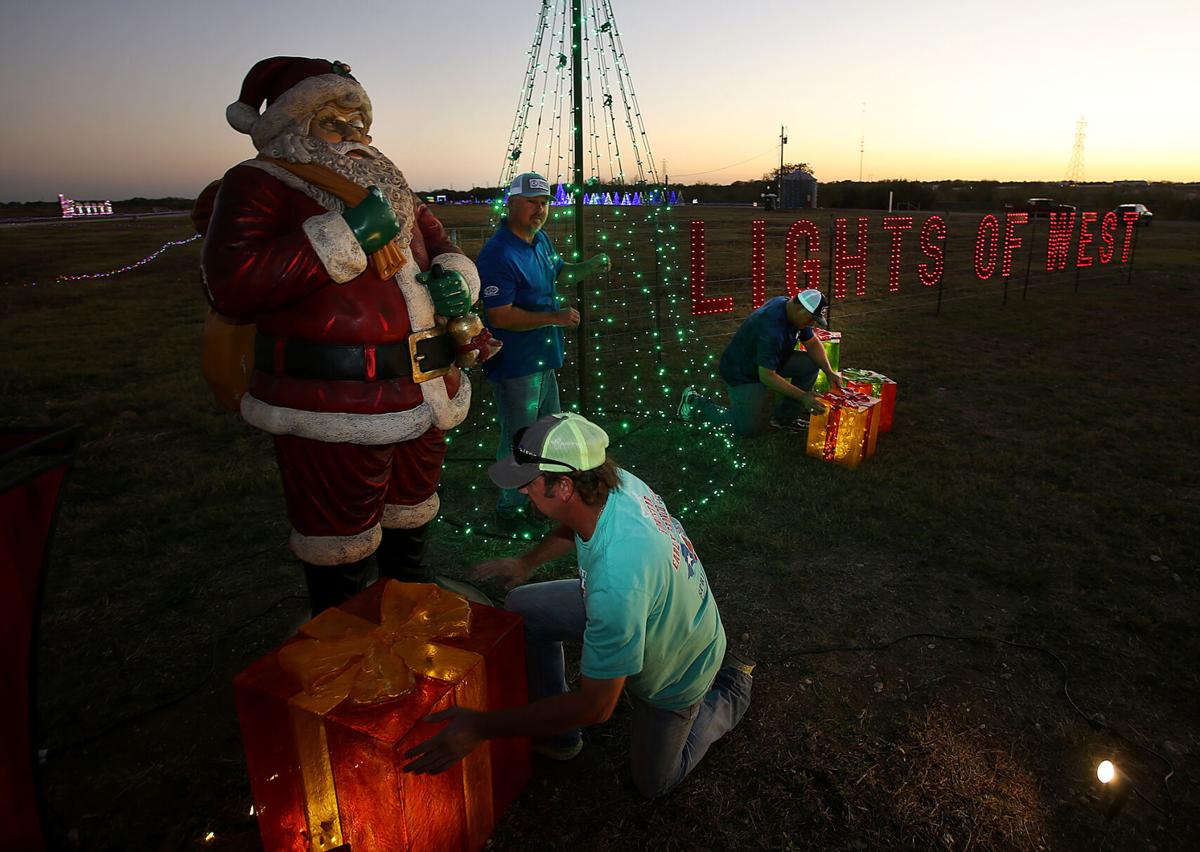 Co-owners Fred Dodd, (from left) Tom Patterson and Brad Luedke fine tune a display at the Lights of West drive-thru that will open Friday off Wiggins Road. A larger, 20-foot figure dubbed Big Santa also is on the premises to greet visitors. 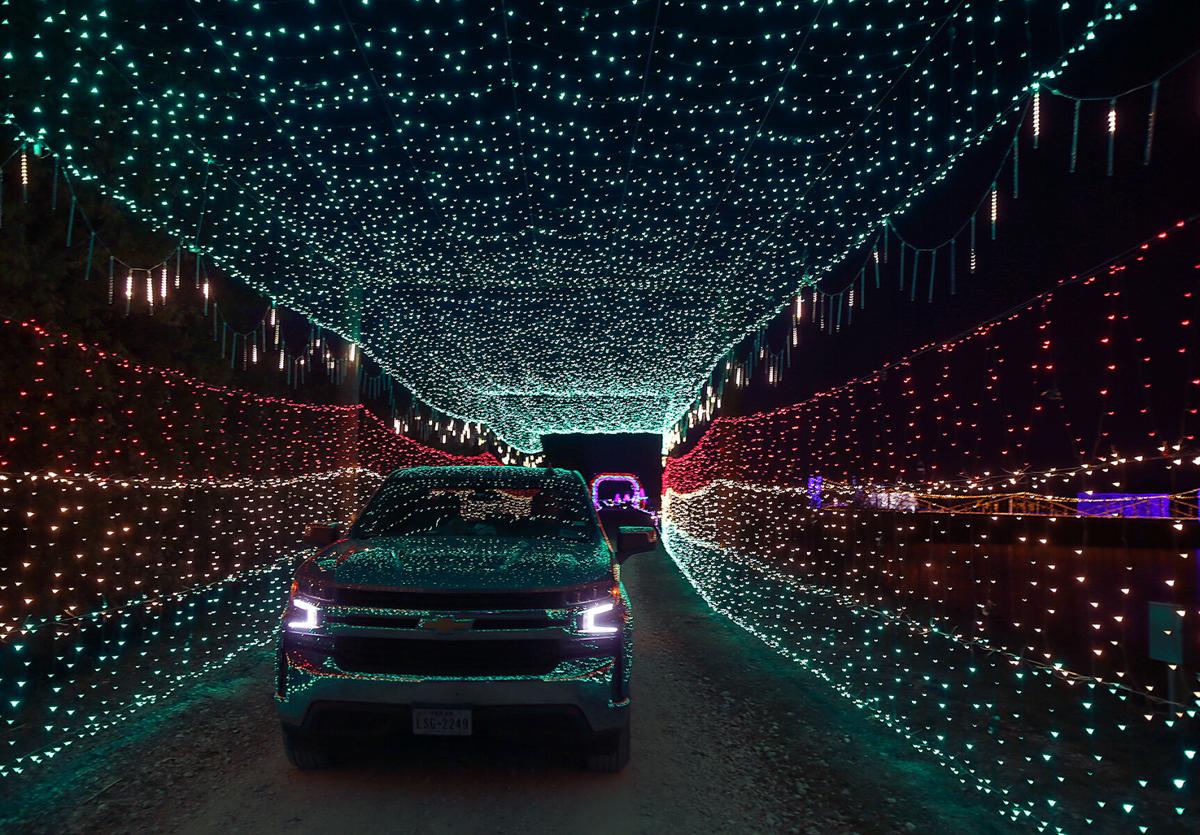 The owners drive their vehicle through one of several displays on the mile-long trail at Lights of West. Three families involved in the project spent more than a year putting it together. 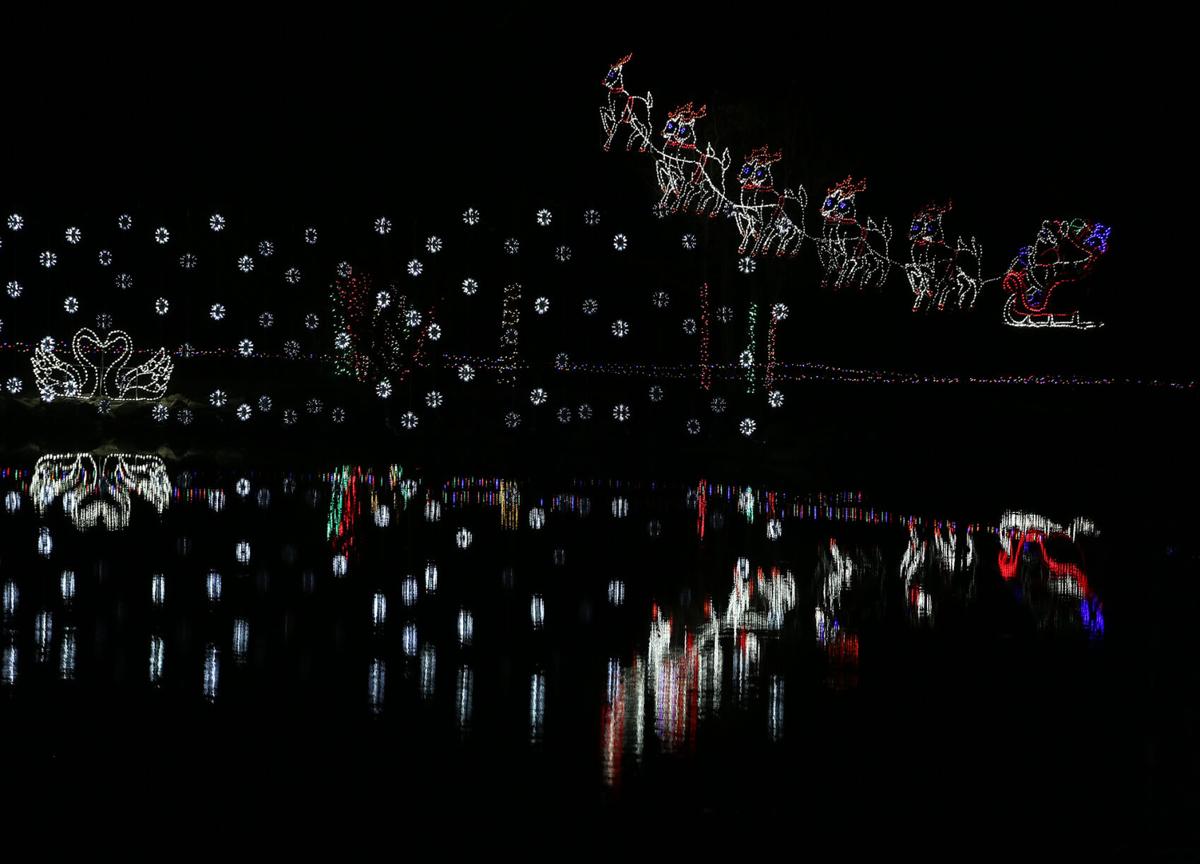 Lights from one of about 100 scenes at Lights of West reflect off a pond along the mile-long trail. 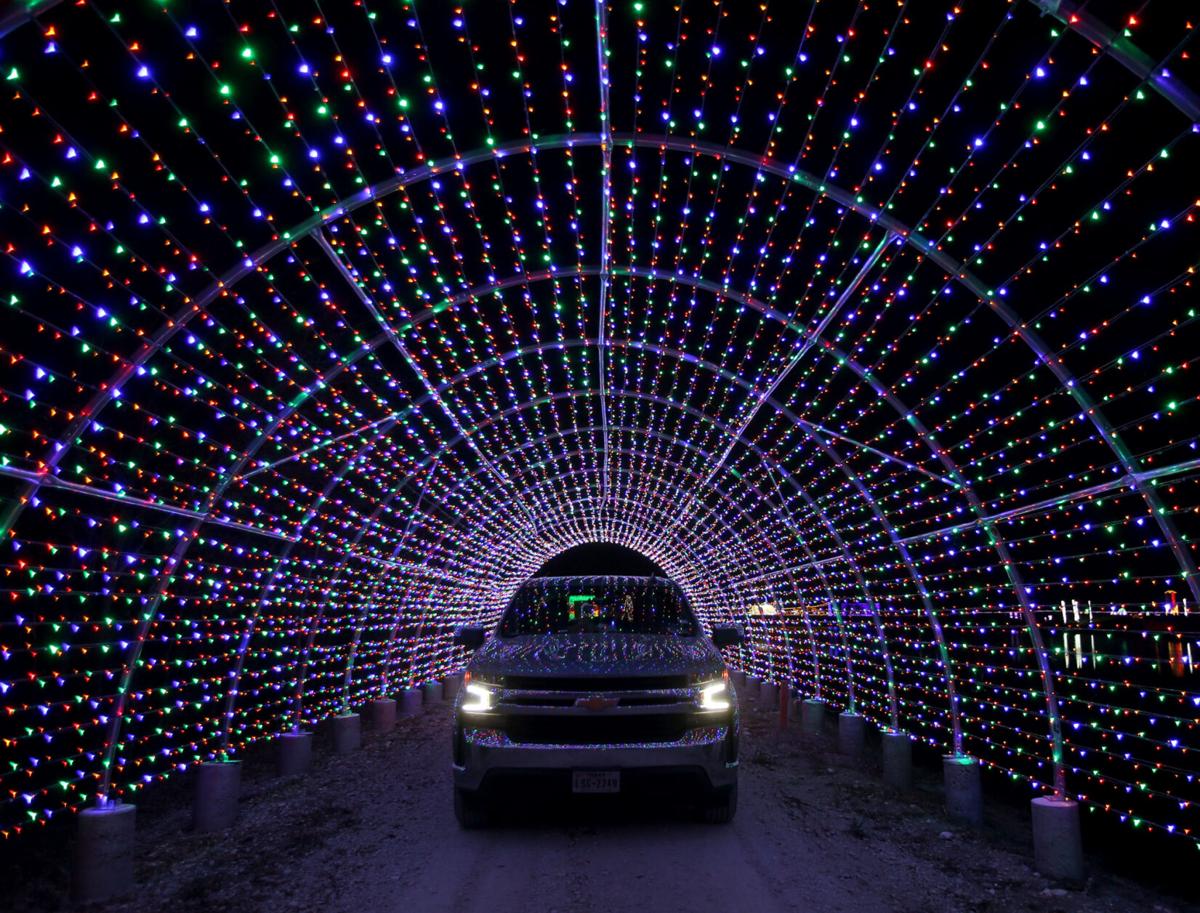 The owners drive their vehicle through one of several displays on the mile-long trail at Lights of West. The attraction includes more than a million lights, according to its website. 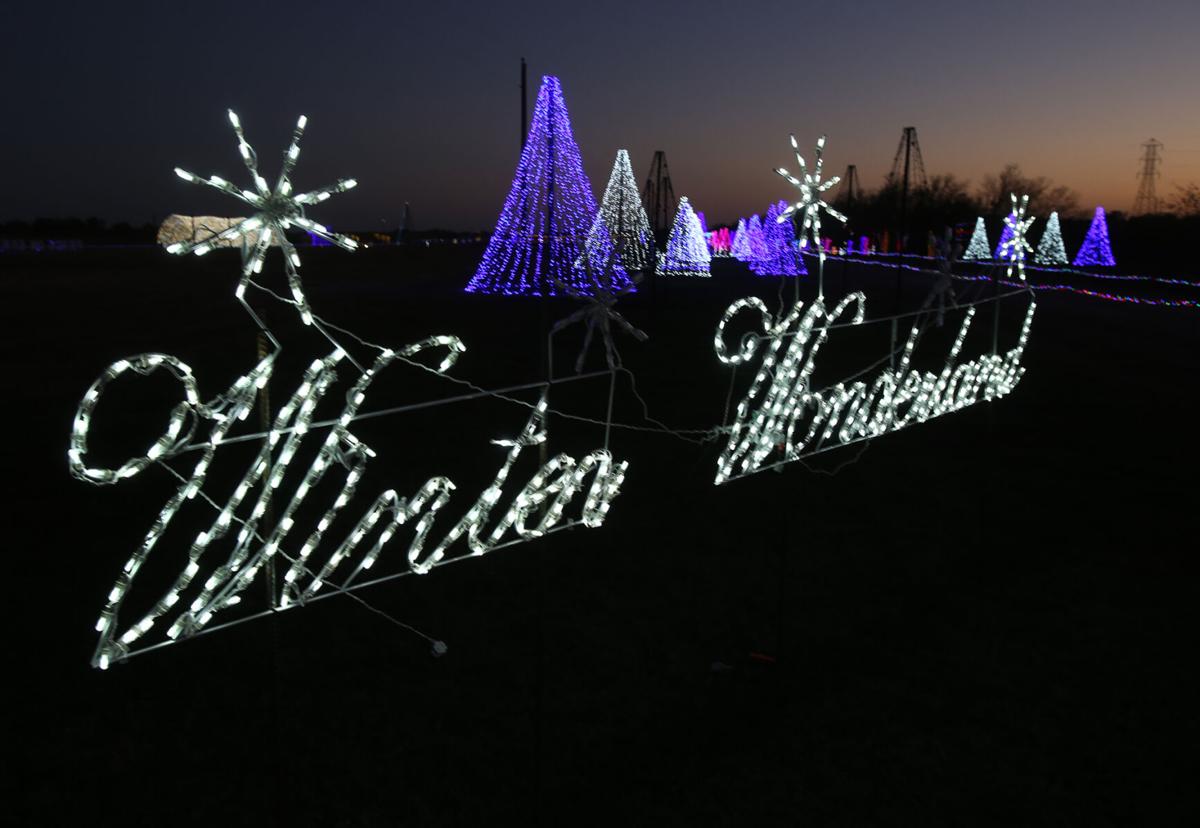 The Lights of West display features 70 Christmas trees, according to the attraction’s website. 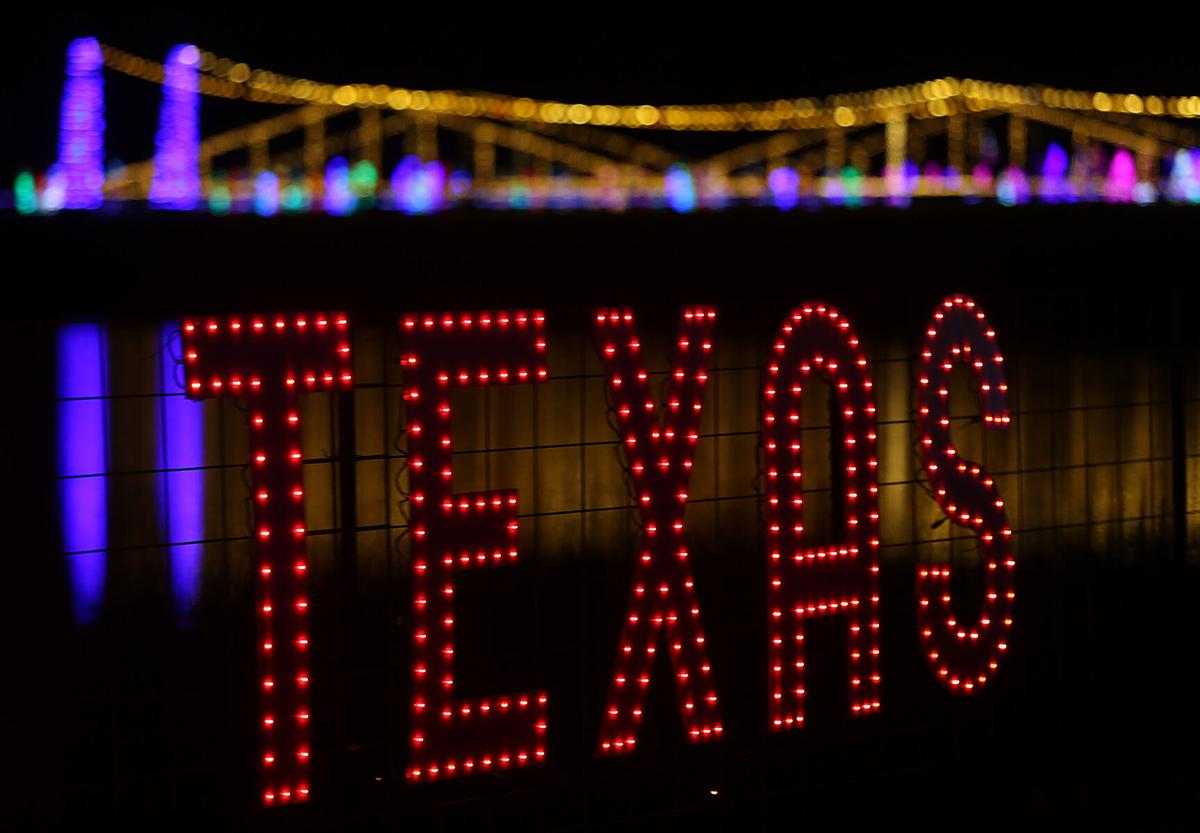 The trail at Lights of West, which is opening Friday, covers about a mile and features more than a million lights. 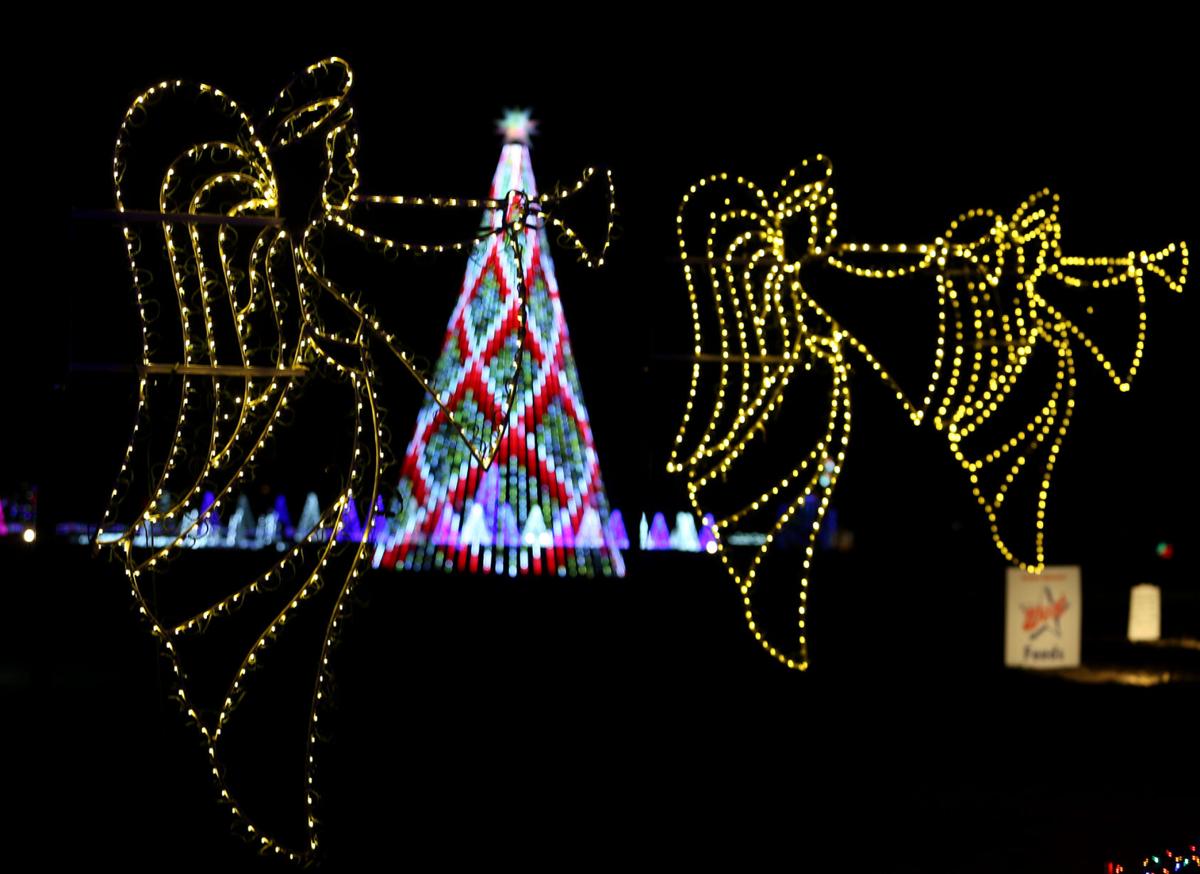 There are about 100 scenes and 70 Christmas trees in the Lights of West display, according to its website.