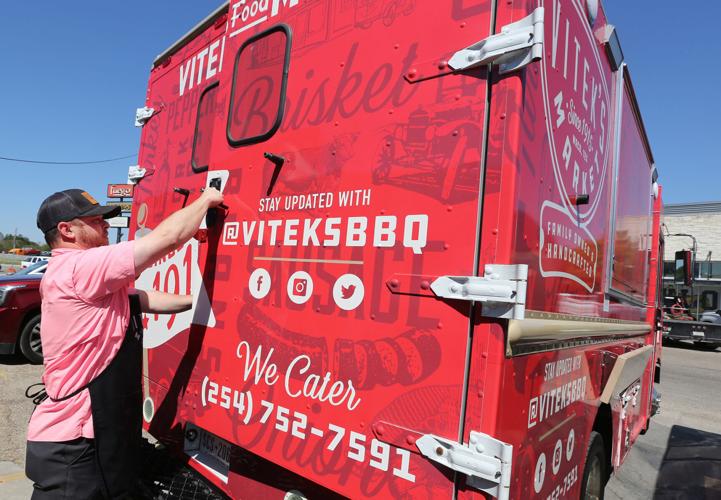 Vitek’s general manager T.C. Brown talks Friday about the upcoming football matchup between Baylor and Oklahoma State. Vitek’s presold 500 Gut Paks that will be handed out from its new trailer at McLane Stadium. 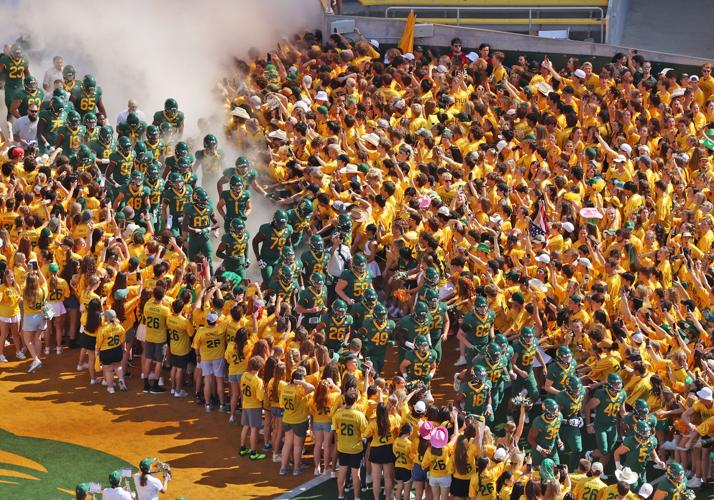 Baylor will take on OSU at McLane Stadium on Saturday. 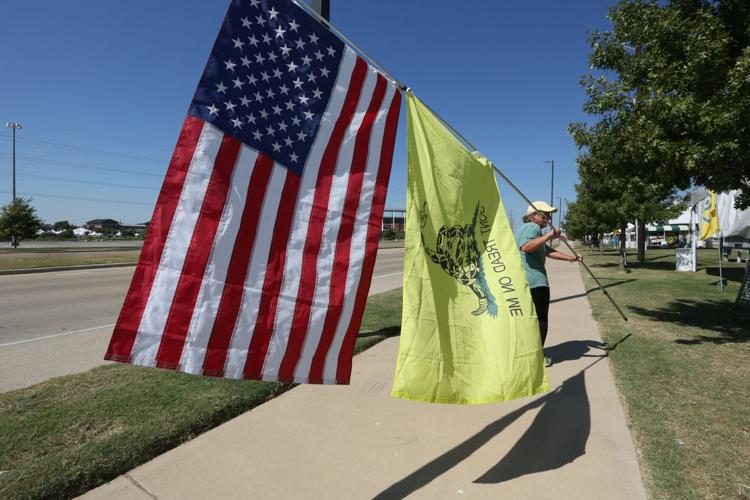 Dorothy Smith sets up gameday flags Friday at her Under the Bear Top Tent at Brazos Parking.

Quite a battle is unfolding this weekend in Waco. And, by the way, the Baylor University and Oklahoma State University plan a gridiron slugfest at 2:30 Saturday afternoon at McLane Stadium.

At least some degree of fracas preceded kickoff. Hotel rooms began disappearing. An APB went out for tickets. Friday began with fewer than 200 seats available in the 45,000-seat stadium. Baylor officials expected a run on those. Angela Plafcan, sales director at the Waco Hilton, said midmorning Friday only two rooms were available. She quickly amended her statement, saying both were taken by guests paying $563 and $488, respectively, for overnight stays.

“This is Baylor’s Big 12 home opener, and it’s our ‘Go Gold’ game, where fans make their presence known at McLane Stadium with optical impact by wearing gold,” Baylor spokesperson Lori Fogleman said. “The game is nationally televised on Fox, so Go Gold brings great energy to our team and visually rallies Baylor fans in support of the Bears.”

The day promises something special to even casual observers, to locals and visitors alike, highlighted by a game between two ranked teams that faced each other in the Big 12 championship game in December, a 21-16 Baylor win.

Kickoff will arrive under sunny skies and temperatures in the mid-80s, according to the National Weather Service.

T.C. Brown, who manages Vitek’s BBQ on Speight Avenue, a tight spiral from the Baylor campus, psyched himself up to meet the challenge.

He predicted 450 transactions on game day, not counting the road trip to McLane Stadium to prepare and serve 500 Gut Pak meals from his food truck.

“We have a lot of people to feed. They’re trickling in already,” said Sammy Citrano, whose George’s Restaurant Bar & Catering in South Waco has become a tradition among Baylor fans and foes alike. Expect to see Baylor-themed memorabilia, photographs and conversation there.

Citrano is known to gush over Baylor athletics and what the school means to his bottom line, but he raised his game to another level Friday. He said many factors are converging to make Saturday something special, starting with the game itself and events surrounding it.

He will serve catfish, chicken-fried steak and crazy wings to the Fox production and broadcast teams Saturday morning. George’s also will cater an event for hundreds at the Baylor Letterwinners Lounge at McLane Stadium. Citrano also said he will feed several baseball prospects Baylor is hosting this weekend.

At home base, 1925 Speight Ave., Citrano will erect “event tents” in the George’s parking lot to accommodate dining, drinking and TV watching.

Fogleman said Baylor will give away gold pom-poms to the first 20,000 fans entering McLane Stadium from gates A, C and D. She said Touchdown Alley, which opens at 11:30 a.m., also will offer freebies while supplies last. The Bear Walk that showcases players and coaches entering the stadium will start at 12:40 p.m. at the South Plaza. Gates open at 1 p.m.

“We have staff at the game working hard to encourage people to stay and enjoy activities in Waco such as our live music, theater, and the Waco Cultural Arts Fest,” said Carla Pendergraft, assistant director of tourism at the Waco Convention and Visitors Bureau. “Restaurants and shops should do a brisk business with so many visitors in town.”

By email, Pendergraft said scattered hotel rooms are available, “but a check of booking.com shows most of them will set you back $200 to $300 a night.”

Plafcan, at the Waco Hilton, also serves as sales director of the nearby Courtyard by Marriott. They have nearly 350 rooms between them, and all were full or filling throughout Friday. She said visitors arriving for a Baylor football game Saturday typically do not leave until Sunday.

She said the Waco Hilton’s room rates began surging toward $400 a night earlier in the week, since rates rise as availability falls.

Waco fastener firm to invest $9.1M, expand to staff to 504 under city-county deal

Howmet Fastening Systems is pursuing a grant from Waco and McLennan County as it pledges to expand its plant, install $9.1M in new equipment and create 17 new full-time positions.

Vitek’s general manager T.C. Brown talks Friday about the upcoming football matchup between Baylor and Oklahoma State. Vitek’s presold 500 Gut Paks that will be handed out from its new trailer at McLane Stadium.

Baylor will take on OSU at McLane Stadium on Saturday. 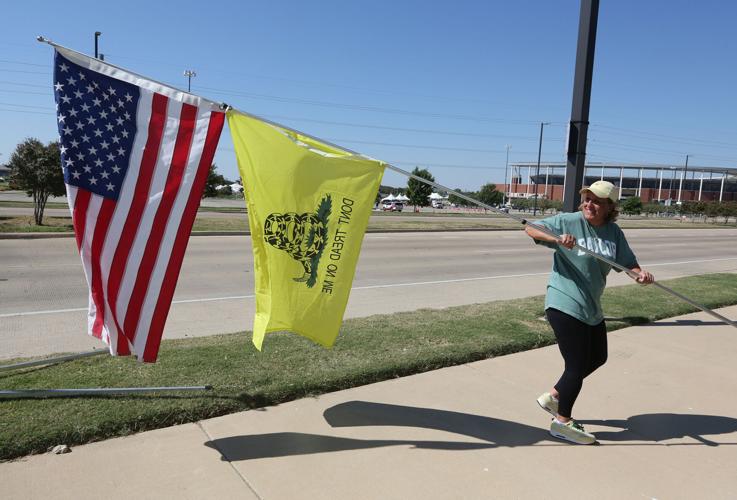 Dorothy Smith sets up game day flags Friday at her Under the Bear Top Tent at Brazos Parking. 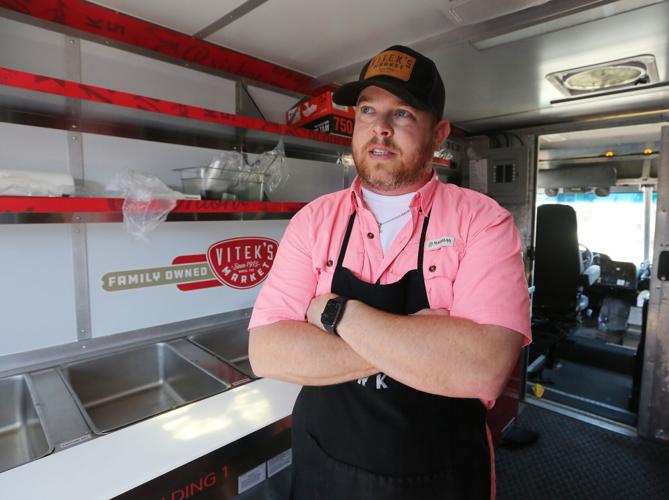 Vitek's general manager T.C. Brown talks Friday about the upcoming football matchup between Baylor and Oklahoma State. Vitek's presold 500 Gut Paks that will be handed out from its new trailer at McLane Stadium.

Dorothy Smith sets up gameday flags Friday at her Under the Bear Top Tent at Brazos Parking.