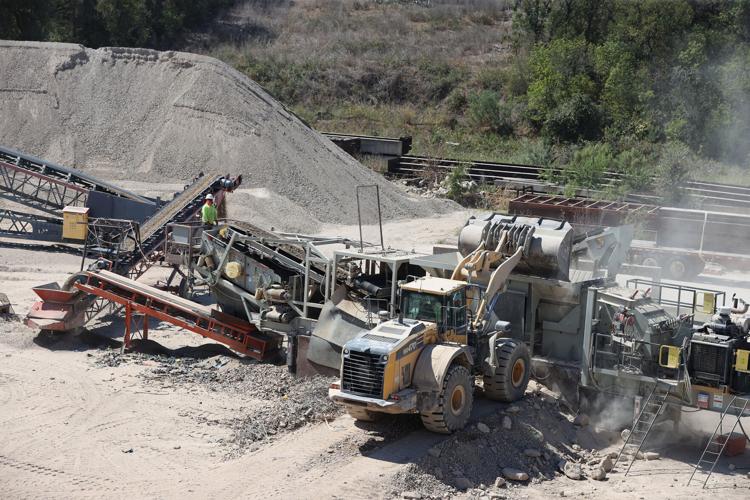 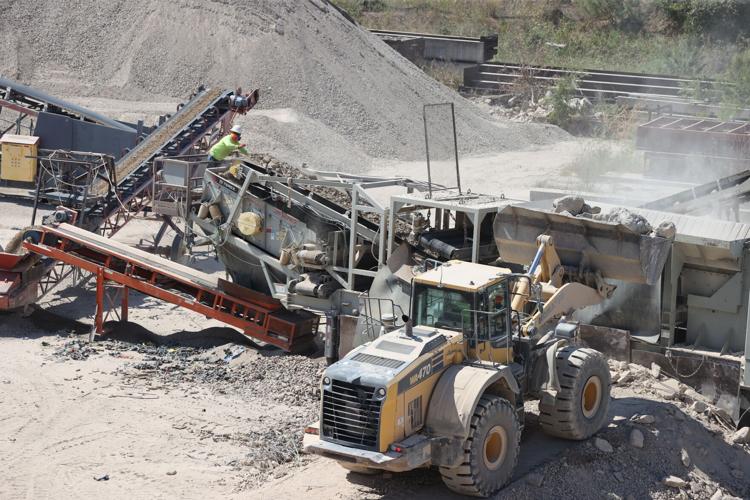 Thomas Arnold is making rubble haulers quite an offer. They can carry scrap concrete to his processing sites at no charge, or they can roll up to the city of Waco’s landfill on U.S. Highway 84 and pay $100 a ton.

The roughly 6-year-old company crushes this material into “big rocks and small rocks,” said Arnold, scooping a handful from a mountainous pile at his South Third Street location. The Texas Department of Transportation loves the stuff as base material for highways.

TxDOT has become his biggest customer, generating half his revenue. He said Precinct 2 McLennan County Commissioner Patricia Miller has become a good customer, and he hopes to make inroads with other county precincts and the city of Waco.

Now, Arnold is applying what he knows to a hot market, one that may get hotter due to Waco’s new policy effective Oct. 1.

Big haulers now must pay $60 a ton to dump at the landfill, up from $55, while a new fee levies $100 a ton on loads that include concrete.

“Concrete eats up so much space in the landfill, and it does not compact very well. It is a very dense material,” said Kody Petillo, Waco’s solid waste director. “We’re doing the best we can to ensure the life of our landfill. We estimate it should reach capacity in January 2025.”

The city continues pursuing a permit to place a new landfill in Axtell, near State Highway 31 and TK Parkway. When Waco closes its landfill off Highway 84, Arnold said he probably will shutter his site near there.

Arnold has paved his own road to the niche business of concrete recycling.

He majored in economics at Washington & Lee University in Virginia. His father, Dr. Watson Arnold, is a pediatric nephrologist in Fort Worth. Physicians practically run in Arnold’s family, he said with a smile, and it was at their urging he took a career path less traveled.

He lived three years in South America, becoming fluent in Spanish, before signing on with Kiewit Corp., one of the largest and most respected engineering and construction firms in North America.

Later, he joined Webber LLC, the Houston-based road contractor, which is now completing the $341 million Interstate 35 widening through Waco and tackling the “mall to mall” improvements to Loop 340 between Richland Mall and Central Texas Marketplace.

Arnold made it clear he left Webber LLC to start his own company before Webber landed its Waco-area deals with TxDOT.

His Central Crushed Concrete gladly accepts Webber’s rubble free of charge, as it does for others. Scrap material created by the old Hillcrest Baptist Medical Center’s demolition also landed at his front door.

That experience convinced Arnold that Waco needs a policy requiring demolition companies to identify “waste streams” before receiving permits. He said he landed the Hillcrest leavings, possibly preventing their arrival at the landfill, because he knows the parties involved.

Arnold said his work at Webber and Kiewit prepared him for what he does now. He negotiated deals for aggregate they use to build things.

“We bought from everybody, had jobs all over the state,” said Arnold. “Trey Brown with Big City Crushed Concrete in Dallas was a big help to me. He taught me everything, from equipment to production and sales.”

Arnold soft-pedals the growing success of Central Crushed Concrete. He grudgingly agreed it has become a multimillion-dollar company, but said such revenue totals are a must considering equipment costs. Arnold runs a lean operation, employing only 12 companywide, including himself.

Arnold said he stresses safety, material quality and machine maintenance. He said crews will bar entrance to trucks hauling material that would take too long to clean.

Pointing toward a wayward brush pile that included rocking-horse remains, Arnold said its contents must have slipped through the cracks. He said he and his team must remain on watch for “trash bandits.”

Haulers from outside Waco and McLennan County sometimes create a nuisance, said Arnold. They are not aware with landfill rules and fees, and do not realize his door is not open to anything and everything. The result is illegal dumping sites that Arnold would not pinpoint for the record.

Visits Friday and Monday to Arnold’s 50-acre site near South Third Street and Loop 340 and another operation near Highway 84 revealed constant traffic, pyramid-like mounds, and much dirt and dust.

Some concrete arrives riddled with rebar. Arnold and his staff wave it through. Machinery can separate wheat from chaff, so to speak, and rebar shredders slice it into manageable pieces sold as a revenue source, though not a big one, Arnold said.

A burly man leaning against a Webber LLC truck said crews likely would deliver Monday and Tuesday more than 40 concrete dividers used during highway work. Nearby, dividers already delivered were being stacked.

Arnold said he’s pursuing customers for pulverized brick. Another process can produce riprap, which he donates to the U.S. Corps of Engineers for erosion control. A sign posted off South Third Street declares “broken concrete wanted,” and big rigs respond.

Sitting in his pickup truck, Arnold seemingly can name the source of every delivery, with or without company markings.

“Coming into the market, trying to get established, I studied who buys from whom and why. In time, we will open more locations, but we will grow appropriately. We’re working to get really good at what we do.”

Parking spaces and hotel rooms will become scarce as hen's teeth next weekend, when 1,000 farmers and ranchers gather in Waco for the Texas Farm Bureau's 89th annual meeting.

It looks like live Texas Christmas tree sales will be getting a boost this year, said a Texas A&M AgriLife expert and others associated with the industry. 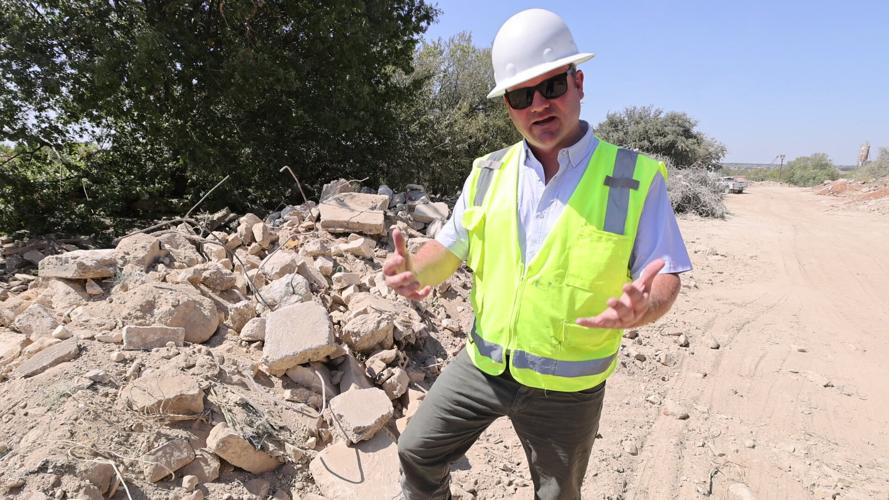 Thomas Arnold expects the growing cost of disposing of concrete in landfills will drive more supply to his gate at Central Crushed Concrete. 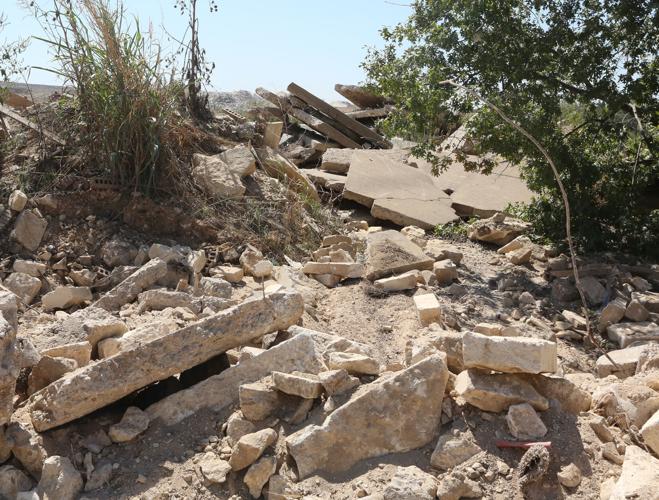 Chunks of rubble at Central Crushed Concrete await their transformation into road base. 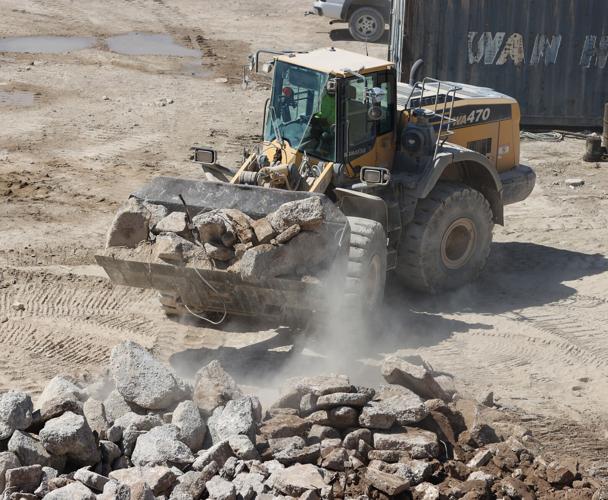 A loader moves chunks of concrete that are waiting to be recycled at Central Crushed Concrete.