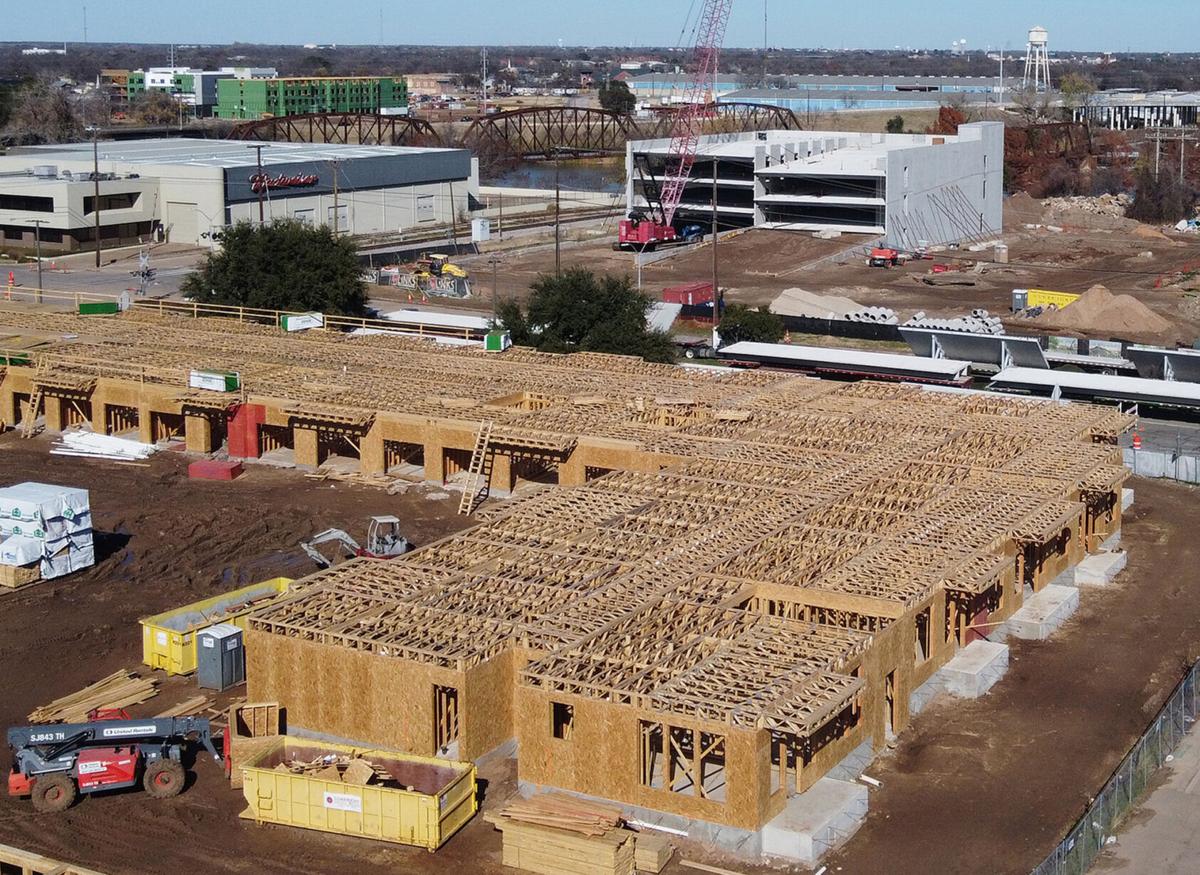 This December file photo shows progress on apartments and a parking garage at the Riverfront development near University Parks Drive and Jackson Avenue. 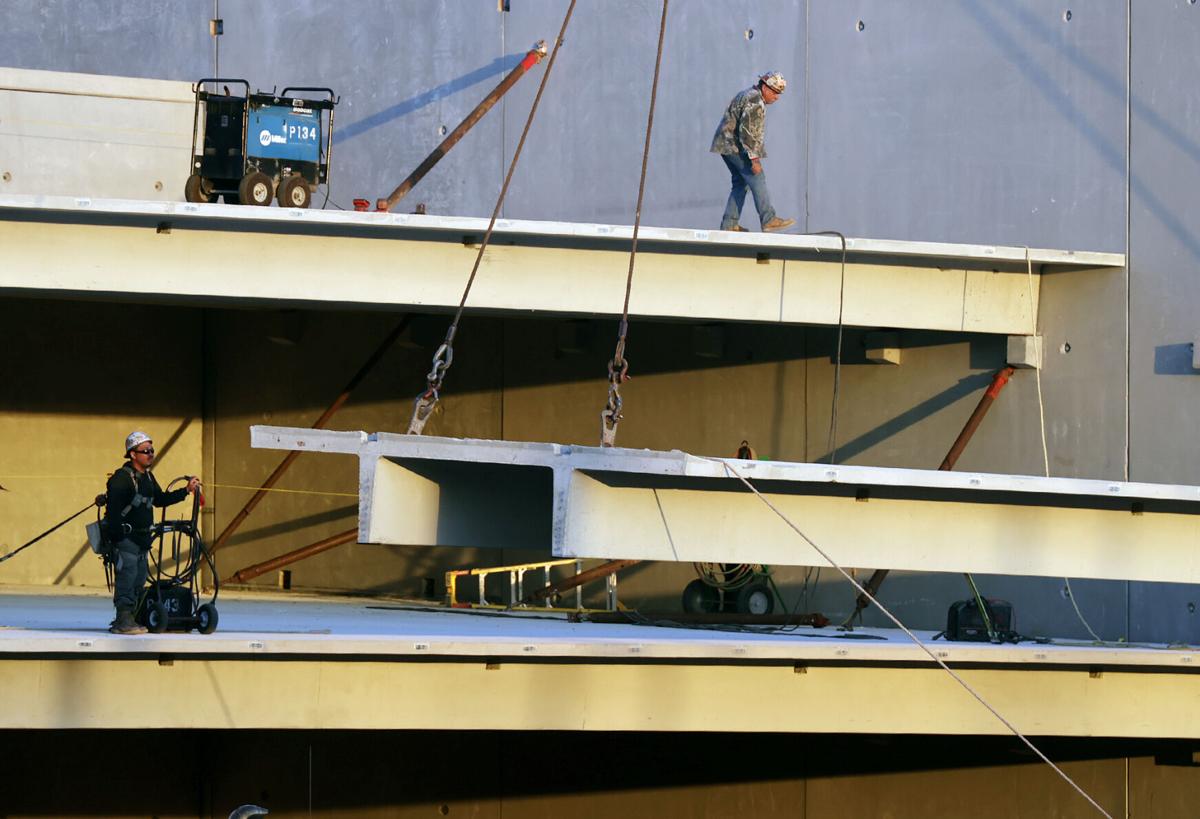 Workers guide a concrete section into place for a parking garage at the Riverfront development near University Parks Drive and Jackson Avenue in this December file photo.

The $100 million Riverfront development unfolding near downtown along Lake Brazos will be featured in an online program at 11 a.m. Feb. 25 sponsored by the Greater Waco Chamber of Commerce. Developers pitched the project as the Brazos Promenade but adopted the Riverfront name by the time construction started last spring.

Paris Rutherford, principal of Catalyst Urban Development, “will share the latest news on the Brazos Promenade and how this development will continue to influence the Greater Downtown renaissance,” a press release states.

To register, go to WacoChamber.com. Questions should be addressed to the Greater Waco Chamber’s Debbie McCutchen at 757-5636.

Wes Bailey, with Bailey Insurance and Risk Management, a locally owned agency dating to 1956, has been recognized by the Society of Certified Insurance Counselors for his 40 years in the business.

Bailey is former chair of the Greater Waco Chamber of Commerce, past president of the Waco Business League and served on the Baylor University Board of Regents. A certified insurance counselor, Bailey for 30 years has served on the society’s national faculty, traveling to lead classes for his peers.

Bailey Insurance and Risk Management was founded by Wes’ father, Bill Bailey, and is ranked in the top 5% of all independent insurance agencies, based on premium volume.

Sales tax rebates serve as a barometer of spending, as the Texas Comptroller’s Office monthly or quarterly returns to cities a percentage of what is spent on goods and services in their boundaries.

February rebates are a big deal because the reflect sales during December’s holiday rush reported to the Comptroller’s Office in January.

Waco received a February rebate totaling $4.65 million, about 1.1% less than the $4.7 million refund it received in February last year.

Not bad, one might say, considering COVID-19’s economic impact.

Waco’s budget manager, Paul Diaz, said the February check did not sour his mood. For the fiscal year, which started Oct. 1, revenue from rebates is running 2% ahead of the previous fiscal year and 27% ahead of budget projections. Diaz said with COVID-19 wreaking havoc, the city budgeted conservatively, setting $36 million as its target, below the $40 million in actual rebates it received the previous year despite the pandemic.

“We didn’t know where this was going, so going conservative was the right thing to do,” Diaz said.

He said he expects rebates to blow past estimates, and the vaccine rollout has produced a dose of confidence.

Small businesses facing financial struggles have another ally, with Startup Waco partnering with Kiva to provide loans from $1,000 to $15,000 requiring no interest and no fees, according to a Startup Waco press release.

Borrowers are asked to obtain community support for their enterprises “by raising microloan commitments from friends, family and neighbors.” These commitments from others can start as low as $25, according to the press release.

“When we speak to entrepreneurs about their needs and pain points, access to capital always comes up as the number one or number two barrier to business growth. That’s all about to change,” said Startup Waco CEO Jon Passavant.

Kiva is the first rung on the ladder to accessibility, Passavant said.

Startup Waco will host a webinar on the program from noon to 1 p.m. Wednesday. To register, go to www.startupwaco.com.

Driving conditions may prove challenging over the weekend and early into this week. Running out of gas would pour salt in the wound.

Unfortunately, gas prices are continuing to rise, reaching a statewide average of $2.20 for a gallon of regular unleaded, according to a AAA Texas report released Thursday. That price is 4 cents more than a week earlier and 12 cents more than on the same day last year. Drivers in El Paso are paying the most at $2.47 a gallon, while Sherman-Denison is a bargain at $2.12.

“Gas prices keep increasing as the price for a barrel of crude keeps rising,” the report states. “Market analysts say this reflects optimism about COVID-19 vaccines renewing demand later this year and oil production cuts by members of the Organization for the Petroleum Exporting Countries.”

Prices in Texas are the second-lowest in the country, according to AAA Texas.

The national average for regular unleaded is $2.49 a gallon.

PHOTOS: A LOOK AT DOWNTOWN WACO DEVELOPMENTS AT THE END OF 2020

Spring break arrives for Waco, ready or not

Spring break arrives for most Waco-area schools this week, and uncertainty abounds.

Buyers, especially from the West Coast, continue to scout Waco neighborhoods for available homes, but lookers so outnumber inventory that some prospects are bidding more than the asking price, a local real estate agent said Thursday during a discussion of the Greater Waco economy.

High electric bills on horizon for Wacoans, Texans a week after thaw

The sun came out, ice began to thaw, and thoughts turned to utility bills. No sooner had the subzero temperatures subsided and the house felt …

Twisted Root Burger Co., at northbound Interstate 35 and South Second Street, will reopen Wednesday after closing for a year because of COVID-19.

Poultry giant Sanderson Farms euthanized 545,000 chicks at Texas hatcheries, including 100,000 in Waco, during the recent ice storm that force…

A Baylor University regent and the owner of a local construction company have joined to buy The Phoenix Ballroom, a hulking structure on South…

Perhaps it took a major winter storm to awaken a struggling hotel industry in Waco and beyond, and that it did, at least briefly.

This December file photo shows progress on apartments and a parking garage at the Riverfront development near University Parks Drive and Jackson Avenue.

Workers guide a concrete section into place for a parking garage at the Riverfront development near University Parks Drive and Jackson Avenue in this December file photo.