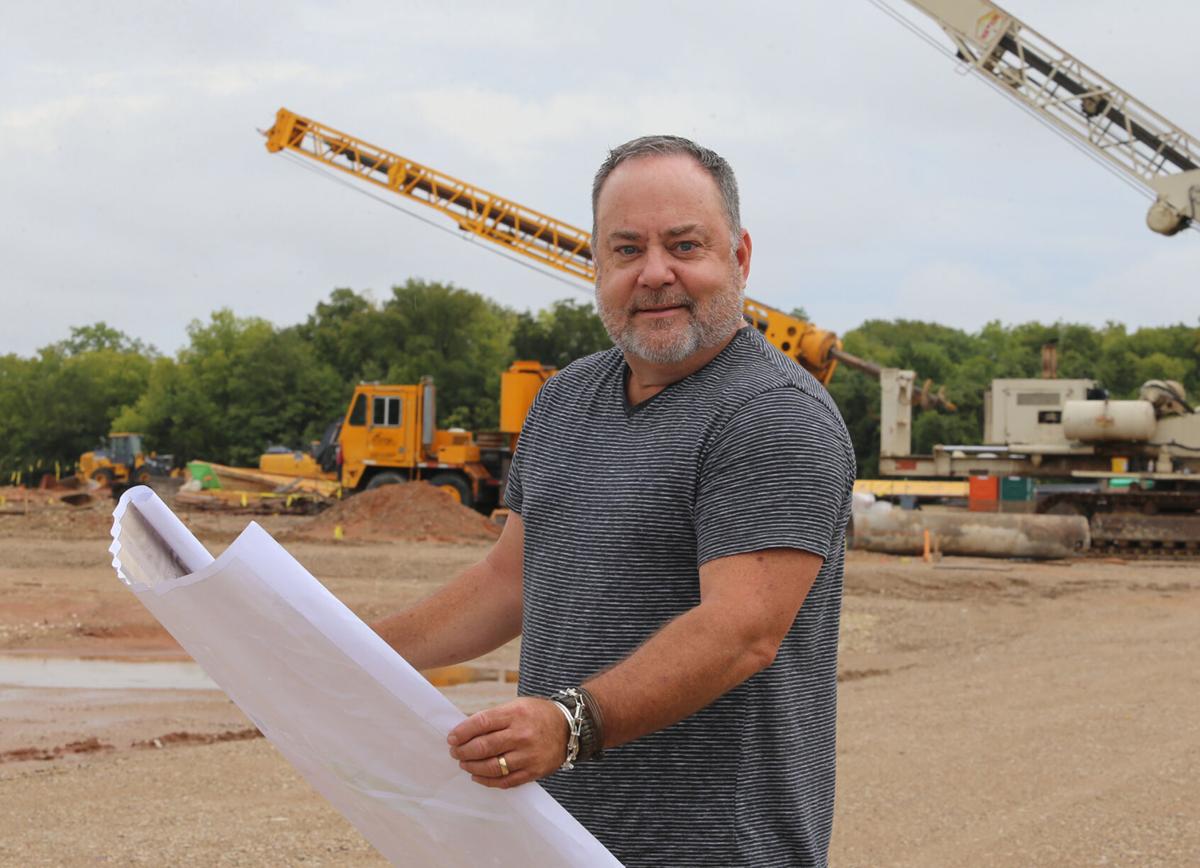 Developer Jimmy Banks visits the site of The Heights, a mixed-use development near Loop 340 and Interstate 35. 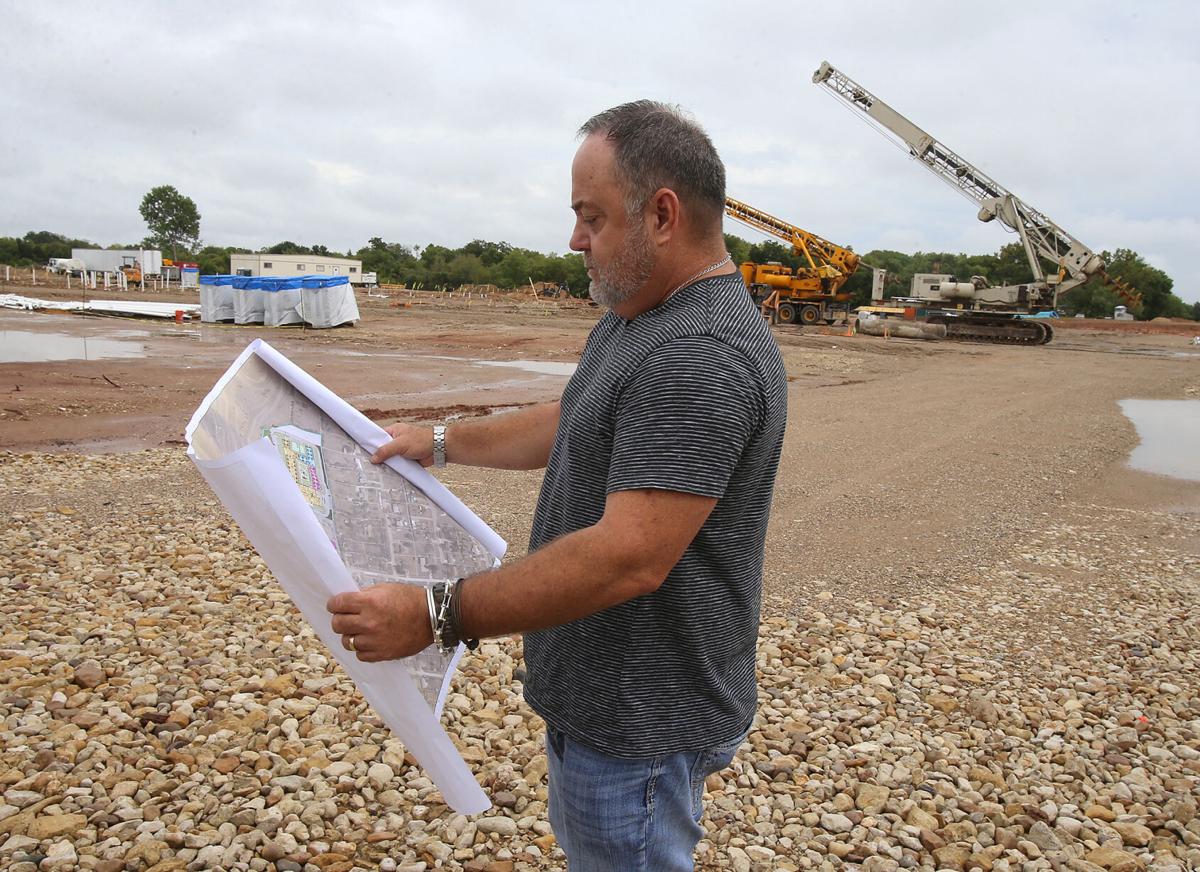 Developer Jimmy Banks looks over plans at the site of The Heights, a mixed-use development near Old Robinson Road and Loop 340.

A 40-bed physical rehab center employing 90 near Interstate 35 will break the ice on a newly minted Tax Increment Reinvestment Zone meant to kickstart commercial and industrial development in Robinson.

The Encompass Health center will help anchor a planned 27-acre mixed-use development on Loop 340 between Old Robinson Road and Highway 77, called The Heights. Developers Jimmy Banks and Lisa Monroe of the Triliji Group real estate firm are also hoping to attract restaurants and a hotel on the site they bought in December.

Under the new reinvestment zone that McLennan County commissioners finalized this week, 75% of tax revenue from The Heights and other new development within a 4,300-acre chunk of Robinson will be plowed back into the reinvestment zone for public improvements or business incentives.

The zone, called a TIRZ, takes in property along portions of Interstate 35, Loop 340 and U.S. Highway 77 and is intended as a carrot to business and industry considering Greater Waco.

A public board will oversee the fund, Robinson City Manager Craig Lemin said.

“The way it works is we place a cap on existing values, and that money continues going into the general fund,” Lemin told commissioners. “But as the area develops, creating new value, new dollars, we put 75 cents of every dollar into the TIRZ fund, 25 cents into the general fund.

“We can borrow against that TIRZ money, or we can pay as we go,” he added. “Continued development feeds on itself and benefits each taxing entity.”

It is the first reinvestment zone for Robinson, though Waco has had similar Tax Increment Financing zones in place since 1982. The Robinson zone includes the 640-acre Robinson Industrial Park at the southeast corner of I-35 and Loop 340 that the Greater Waco Chamber of Commerce’s Kris Collins is marketing.

The TIRZ captures Robinson city taxes and county taxes, not those of the Robinson Independent School District or McLennan Community College.

Banks and Monroe have experience in assembling land-use packages near health-care centers. They shepherded progress at Legends Crossing near Baylor Scott & White Hillcrest Waco, bringing along Saltgrass Steak House, P.F. Chang’s, Chuy’s and Walk-On’s Bistreaux and Bar, among other users.

Now construction is underway on an 11,000-square-foot center at Legends Crossing that will serve as Triliji Group headquarters and speculative space.

“We are looking for tenants as we speak,” Banks said in a phone interview.

Encompass Health, based in Birmingham, Alabama, approached Triliji Group about assisting in securing a development site in Greater Waco, said Banks. He and Monroe launched a search, striking a deal on acreage near I-35 and Loop 340, which he described as a “crucial intersection.”

Encompass Health signed off on the site, said Banks, and work has begun.

“We are excited to bring our rehabilitation services in the Greater Waco area through this new, state-of-the-art hospital,” said Frank Brown, president of Encompass Health’s southwest region, in a news release.

Brown said the facility should open in summer 2021 to complement local acute care services. It will care for patients recovering from a variety of illnesses and injuries, including strokes and other neurological disorders, brain injuries, spinal cord injuries, amputations and orthopedic conditions.

It will employ 90 people with an average salary of $66,000, according to Encompass Health’s request for tax breaks. The city of Robinson and McLennan County each approved seven-year property tax abatements that start at 70% and fall to 55%, said Robinson City Manager Craig Lemin.

During that seven years, Encompass Health will pay $293,000 in taxes to the city of Robinson, while enjoying $511,000 in city tax relief.

Lemin said the city is spending $138,189 on waterline improvements and roughly $565,000 on its sewer system, projects that will benefit the 27-acre site under development as well as surrounding areas.

McLennan County Administrator Dustin Chapman did not provide exact figures Friday on how much the county would realize in additional taxes due to Encompass Health’s arrival, but did say in an email response the healthcare giant has pledged an investment totaling at least $19.9 million.

And Encompass Health is just a starting point, said Banks, who adds it will occupy only a fourth of the 27-acre site when work is done.

“We’re extending utilities throughout The Heights, and we hope soon to have pad-ready sites. I think we’ll probably have 10 to 12 users eventually, probably national and regional names,” said Banks. “I believe we can attract restaurants, builders of healthcare office space, maybe a hotel.”

The McLennan County Commissioners Court and Waco City Council each approved a package deal for Holt Cat on Tuesday, signing off on $900,000 in…

Robinson, a 62-year-old bedroom community of almost 10,500 people, has relied on Waco for a close-to-home downtown experience, but some city l…

Developer Jimmy Banks visits the site of The Heights, a mixed-use development near Loop 340 and Interstate 35.

Developer Jimmy Banks looks over plans at the site of The Heights, a mixed-use development near Old Robinson Road and Loop 340.