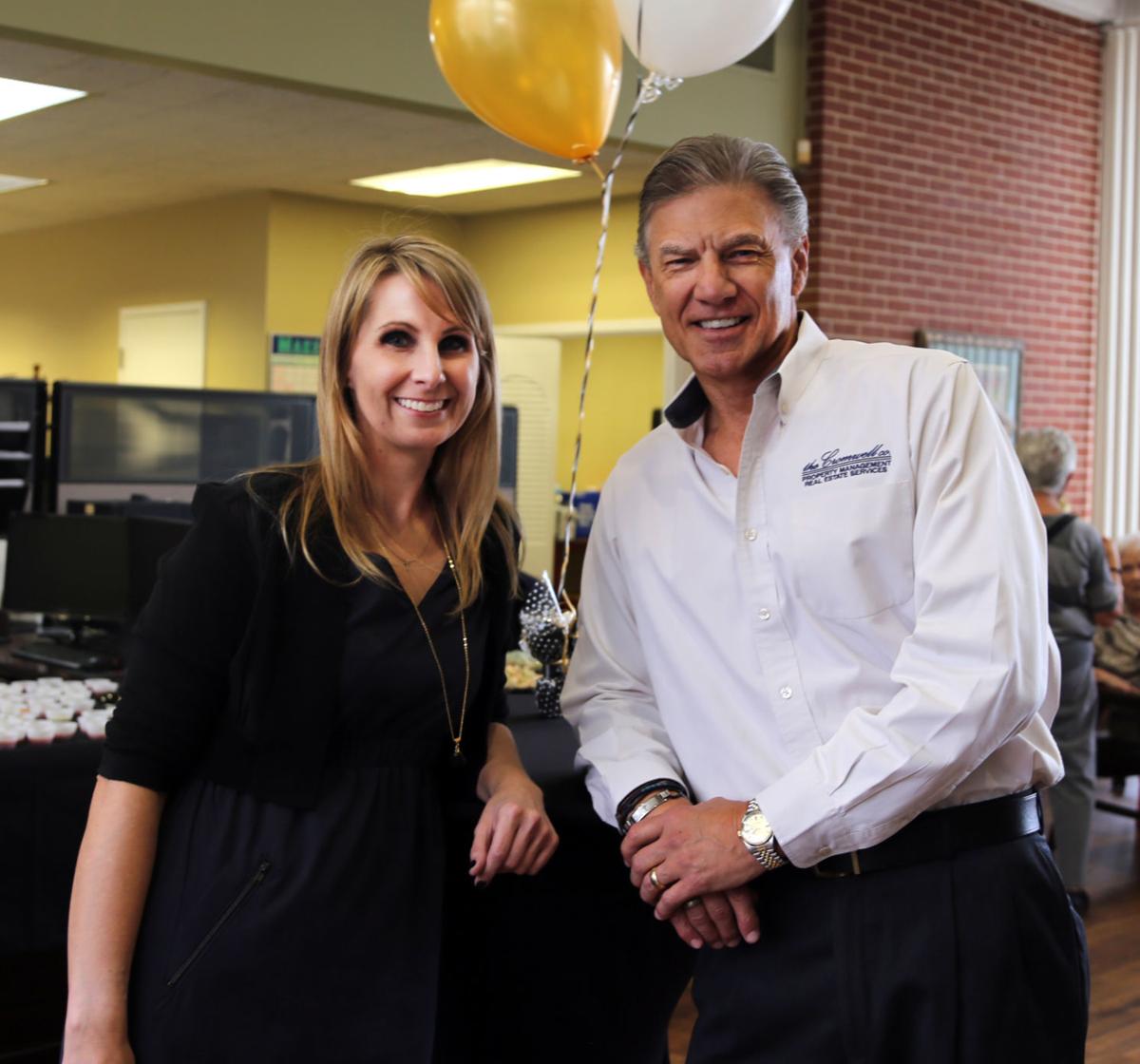 Frank Cromwell (right) and daughter Leighton Cromwell King celebrated the 50th anniversary of the Cromwell Company, which was founded by his father, F. Rhea Cromwell. The party on Oct. 24 also would have been the late founder's 91st birthday. 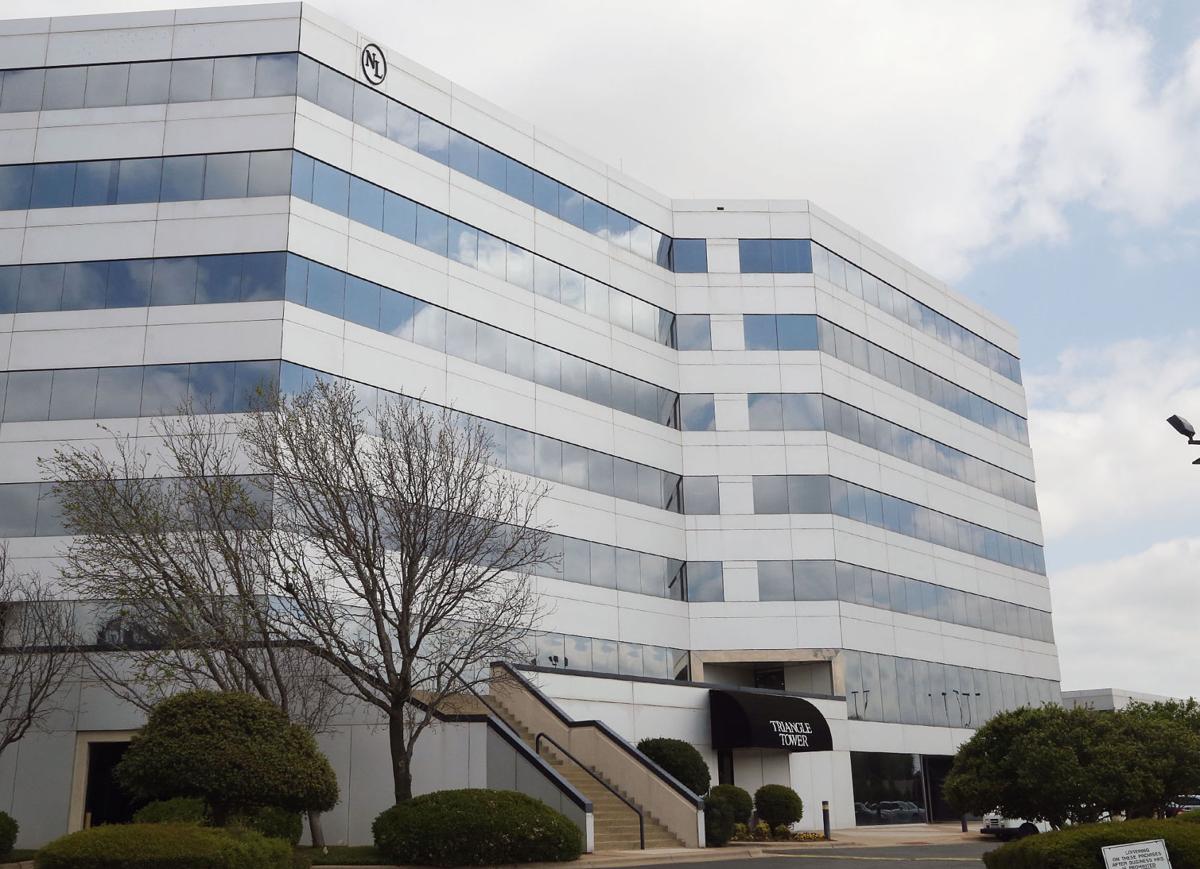 The Cromwell Company took time this week to celebrate a half-century of managing properties in Waco.

The firm at 1725 Columbus Ave. threw a party to celebrate on Thursday, which would have been the 91st birthday of the late founder F. Rhea Cromwell.

His son Frank and granddaughter Leighton Cromwell King now own and operate the business founded in 1969.

Frank Cromwell, 61, a Baylor University graduate, oversees the commercial division while King, a Texas Christian University alum, handles residential duties. Cromwell said though he is approaching retirement, business is brisk and has grown more in recent years than ever. He said investors attracted to Waco by what they have seen on Chip and Joanna Gaines’ “Fixer Upper” endeavors are interested in securing local properties to restore and flip.

Californians, he said, have been sold on the Waco market for years, knowing residential properties will begin generating positive cash flow almost immediately, while those in their home state may prove stagnant.

“The ‘Fixer Upper’ movement has brought a lot of long-vacant properties off the sideline and placed them on the tax rolls,” Cromwell said.

King said the company manages more than 1,000 commercial, residential and industrial properties locally, including Triangle Tower at Valley Mills and Waco drives, the Wells Fargo Tower at 1105 Wooded Acres Drive, Westrock Centre on Hewitt Drive, Roosevelt Tower on Austin Avenue and some of Central Texas Marketplace at I-35 and State Highway 6.

She said their management inventory includes “one-bedroom apartments to executive homes” on the residential side, and includes carrying out the mandates of homeowners’ associations. The business, she said, not only oversees all the details of the rental and leasing process but provides reports that allow clients to easily track the performance of their investments.

Cromwell said his office must keep pace with trends, including the increasing number of young people and millennials interested in investing, people who turn to their computers or iPhones to scour social media for information.

Subscribing to services that allow the mass “blasting” of information across the technological spectrum has become a necessity, Cromwell said.

“We are living in an age of instant gratification. People want data and they want it now. We have to adjust accordingly,” Cromwell said.

He described Waco as a tight community, adding he works almost daily with his brother, Bland Cromwell, a commercial and industrial real estate specialist in Waco, but also conducts business with a host of other agents locally.

Cromwell said he’s well aware of “horror stories” about landlords who refuse to do right by their tenants. He said he will not tolerate such behavior.

“We follow the nuts and bolts of the Texas Property Code right down the line,” he said. “There is never any doubt about where we stand.”

Houston-based Luby’s Inc., which has a location in Bellmead, announced it will offer deliveries seven days a week via a partnership with Favor Delivery, a service now owned by H-E-B, the San Antonio grocery giant.

“We are delighted to partner with Favor to deliver fresh meals from Luby’s and Fuddruckers restaurants to customers across our home state of Texas,” Todd Coutee, Luby’s Inc. chief operating officer, said in a news release. “It’s a natural extension of our relationship with H-E-B, our exclusive retail partner offering Luby’s frozen entrees and side dishes at their store.”

Luby’s has included Waco in its delivery area.

Burger King reportedly has signed a long-term lease on the former Taco Bueno building at 1601 Hewitt Drive. Renovations continue there.

Adam Voight, with H&A Commercial, confirmed the deal has shown up on his database. A sign out front says the project involves Ampler Development, a company heavily involved with the Burger King brand.

It serves beer produced at the onsite microbrewery, as well as pizza and snacks such as pretzels and garlic knots, according to its Facebook page. Owner Dustin Evans, a longtime home brewer, opened for business on Oct. 11.

The brewery is hosting quite a few World Series watching parties.

Balcones, Waco’s award-winning whiskey distiller, continues to reap rewards and recognition. It is mentioned extensively in the November edition of Texas Monthly magazine, whose cover story is titled “The Great Whiskey Boom!” The story places Balcones on the cutting edge of the burgeoning whiskey industry in the Lone Star State, and includes many quotes and perspective from Balcones’ head distiller Jared Himstedt.

By the way, Balcones is celebrating its 10th anniversary this year.

Meanwhile, the Balcones headquarters at 225 S. 11th Street will host the Scotch Malt Whisky Society the evening of Nov. 11.

“They have been at the forefront of single barrel cask strength single malt offerings for decades, and we are thrilled to partner with them for this fantastic event and spread the word about the whisky and membership to the society,” said Balcones in a news release. It goes on to say Balcones will introduce its latest cask to society members and friends during the tasting.

Balcones does business out of the renovated former Texas Fireproof Storage Company building that spreads over 65,000 square feet.

Is Your 401(k) Enough for Retirement?

Your employer's plan is a great place to start on -- and potentially achieve -- your financial goals.

What financial pros have to say about inflation fears

What factors are driving these inflation fears? Plenty. Also, check out more of the week's best finance reads from experts at NerdWallet, The Motley Fool and Forbes.

2 Changes to Social Security You Probably Didn't Know About

They might have impacted your pocketbook, but did you notice?

If you want to retire early without paying penalties, you need to read this.

Frank Cromwell (right) and daughter Leighton Cromwell King celebrated the 50th anniversary of the Cromwell Company, which was founded by his father, F. Rhea Cromwell. The party on Oct. 24 also would have been the late founder's 91st birthday.