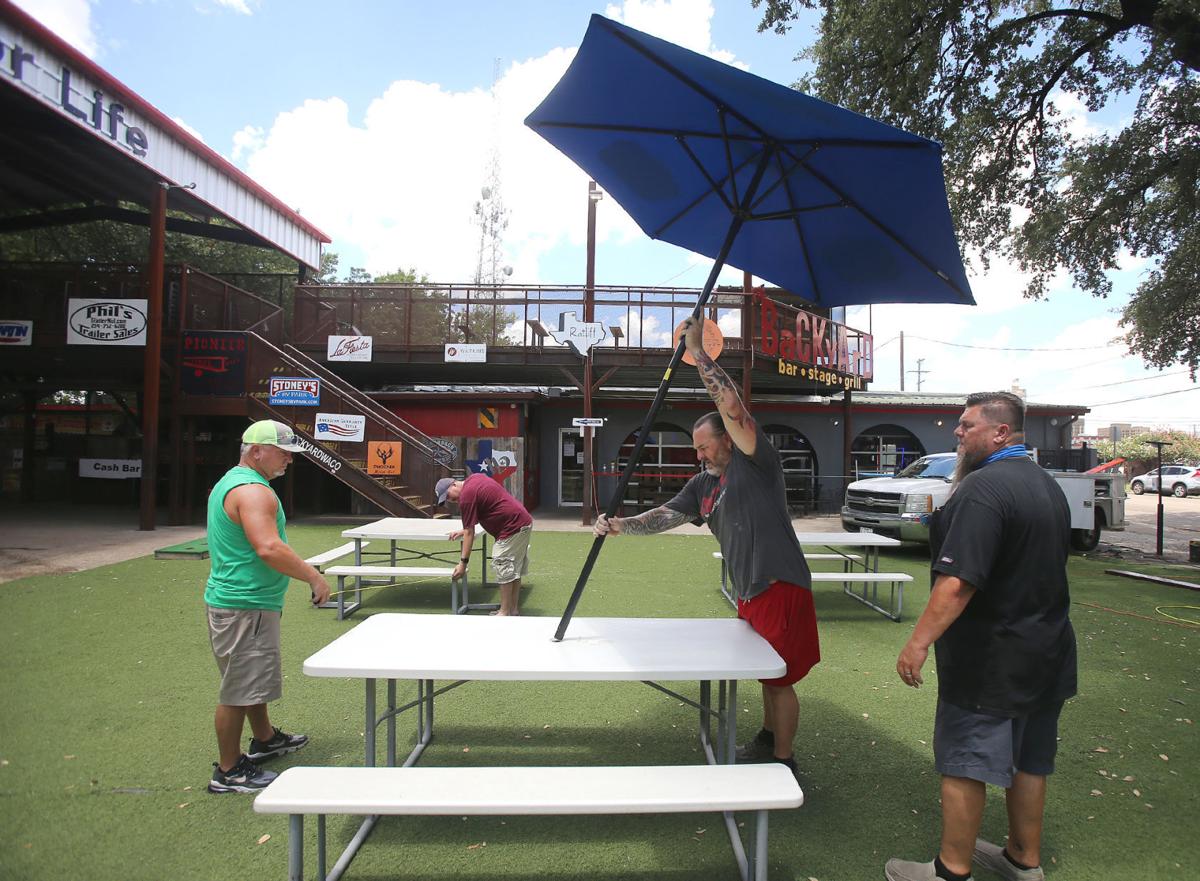 The Backyard owners Chris Cox (from left), Brian Brown and Russell Clay set up tables as they prepare to reopen with a new food and beverage certificate from the Texas Alcoholic Beverage Commission allowing them to qualify as a restaurant. 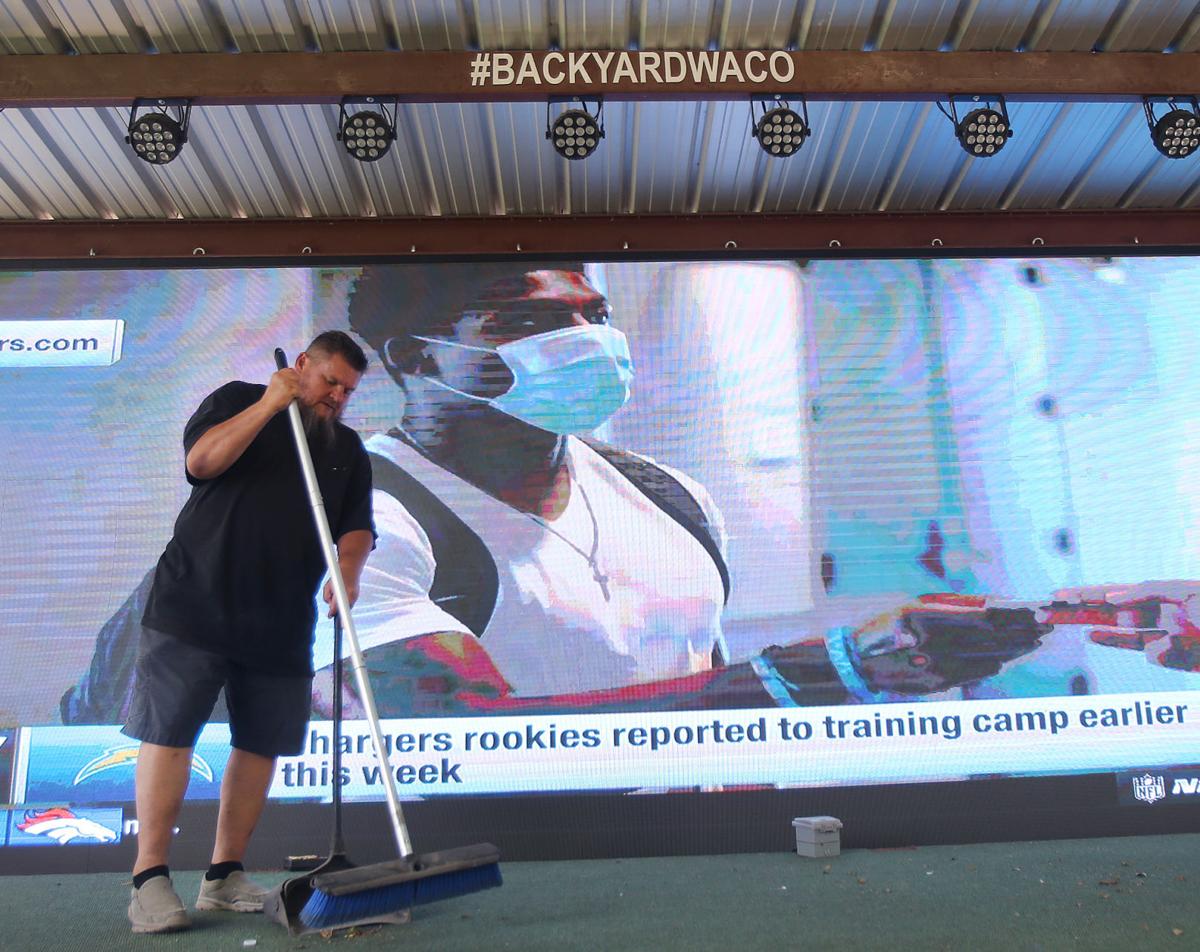 Backyard co-owner Russell Clay sweeps the stage in front of a large screen. 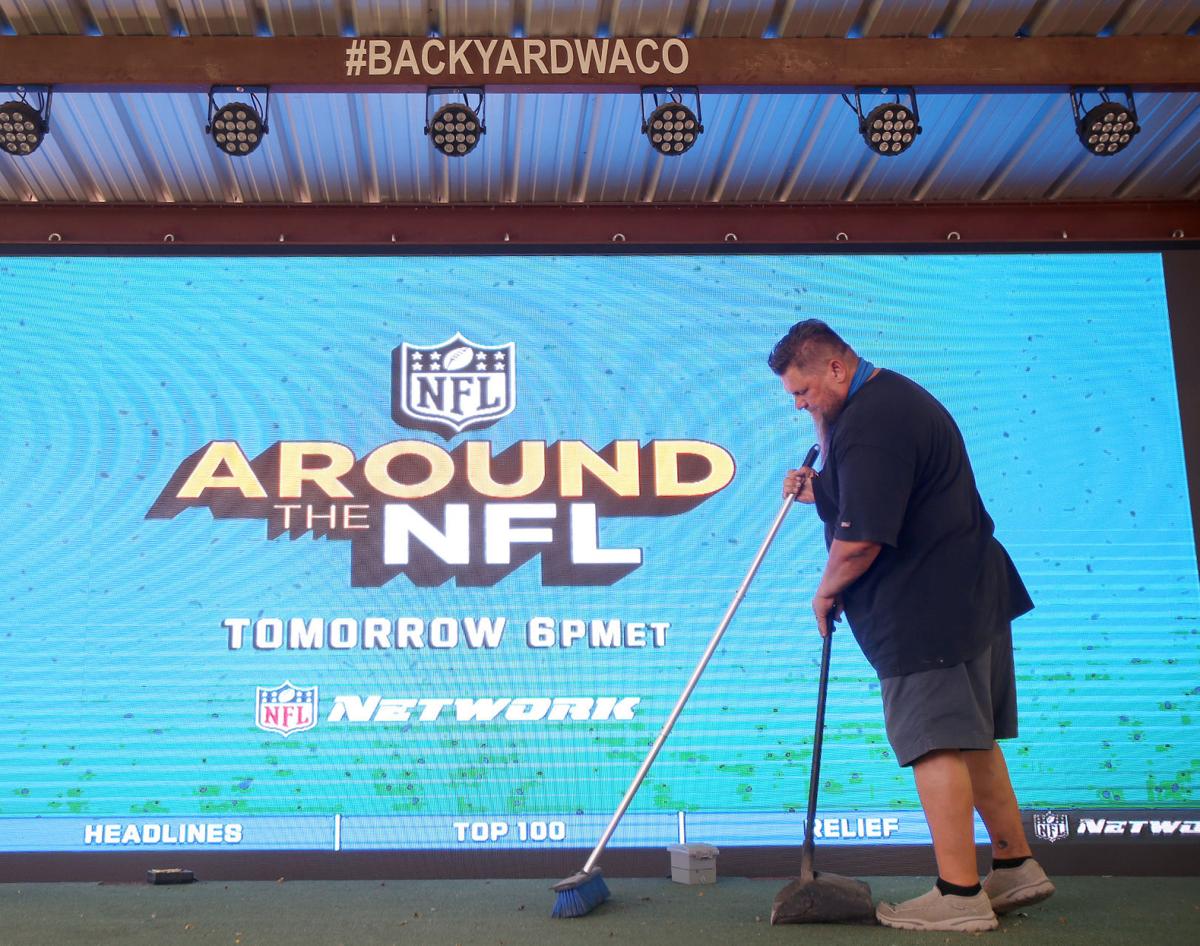 The Backyard co-owner Russell Clay sweeps the stage in front of a large screen.

The Backyard Bar Stage and Grill, a popular destination on Waco’s nightlife scene, will reopen Friday with a food and beverage certificate that sidesteps Gov. Greg Abbott’s decision to close bars statewide to combat COVID-19.

It is not alone in taking this approach, Texas Alcoholic Beverage Commission spokesperson Chris Porter said. Establishments around the state are “looking for ways to expand their ability to operate,” as they continue to struggle with closing orders and limits on occupancy.

“I can tell you, this is financially killing these people and their employees,” said Waco attorney Cody Cleveland, whose clients include The Backyard. “I’ve had bar owners tell me that if something isn’t done by the end of the week, they’re done.”

Chris Cox, an ownership partner in The Backyard, said he secured a food and beverage certificate Tuesday following lengthy talks with the Texas Alcoholic Beverage Commission. He formally submitted a request July 12.

“This is not a loophole by any means,” Cox said. “We have the same license, just added a food and beverage certificate. Our food sales must remain above 40%, and we will be audited. We will be asking people to order food. You can’t just sit and drink all night. You have to order food.”

He said The Backyard maintains an extensive menu, but alcohol sales comprise more than 51% of gross sales, making it a bar in the eyes of the TABC. The Backyard joined bars statewide in closing June 26 to comply with Gov. Abbott’s directive aimed at curbing the surging number of COVID-19 diagnoses, hospitalizations and deaths. It was the second such order aimed at bars. Abbott has since said publicly that he regrets reopening bars as quickly as he did after the initial shutdown. Local health officials said Wednesday that the rate of spread in McLennan County remains high but is showing signs of leveling off or even decreasing.

The Texas Bar and Nightclub Alliance has filed a $10 million federal lawsuit against the State of Texas seeking to overturn Abbott’s executive order.

Andrew Steakley, who owns Barnett’s Pub at 420 Franklin Ave., said he has joined in the lawsuit. Steakley said he has decided against pursuing a food and beverage certificate.

Brown also is a business partner in The Backyard Bar Stage and Grill.

Cox said he likely will limit occupancy to 20% during the performances.

“That’s the top number I feel comfortable with bringing in here,” Cox said. “The last thing we want to do is get shut down. There will be masking requirements. Unless you’re sitting at a table, you must wear a mask. If you get up to go to the restroom, you have to wear a mask.”

Cox said he does not believe reopening The Backyard will frustrate efforts to stop the spread of COVID-19 by eliminating gatherings.

“I really don’t think so, simply because we will be seating people outside at a 6-foot distance. We’re not cramming people into a shotgun bar, shoulder to shoulder,” Cox said. “This is going on three weeks of bars being shut down, and there has not been a drop in cases. That is being recognized too.”

Porter, the TABC spokesman, said establishments applying for a food and beverage permit must have a permitted kitchen where food is prepared, not just a microwave or a toaster oven.”

“In some instances we have received requests from businesses that have a food truck parked outside, and plan to have it there permanently. That would not qualify,” Porter said.

Granting food and beverage certificates is nothing new or uncommon for the commission, which historically has issued them in geographic areas where the serving of alcohol is restricted, he said.

“They didn’t want a full bar, but they did want to accommodate a Chili’s, for example, which would be allowed to operate in those areas,” Porter said.

He said the TABC has issued more than 200 such certificates since March 1 “out of approximately 25,000 restaurants and bars across the state.” He said about 50 businesses in Central Texas are among those. He said he had no exact figures for Greater Waco, but estimated about a dozen.

He declined to identify the venues receiving the certificates. He added misinformation is floating around about the process. Simply put, he said, an establishment may secure a food and beverage certificate if alcohol sales remain below 51% of gross sales. The TABC and the Texas Comptroller’s Office continuously monitor for compliance.

Mark Hall, who owns Oakley’s Texas Bar & Grill, with locations on North Valley Mills Drive and in Riesel, said he likely will pursue a certificate.

“It has to do with food sales,” Hall said. “I will need to sign an affidavit verifying my food sales the past six months, show the figures and show how they’ve changed, which ours have because I put in a full kitchen a couple of years ago. Obviously I’m not doing anything but delivering food now.”

He said TABC also has asked him to project sales for the next 12 months, provide photos of the kitchen and diagrams of his bars.

Hall said his main bank account has shrunk $28,000 in fewer than 30 days. He has laid off half his staff, retaining two cooks to prepare food orders, and negotiated a sales tax payment plan with the Texas Comptroller’s Office.

“I made every payment on time until we shut down,” said Hall.

Before COVID-19, nightly crowds of 200 were commonplace, he said.

“Even at 25% occupancy, we were doing pretty well. We could pay our bills,” Hall said. “We’re just hoping to come back alive.”

Cleveland, the local attorney, said bars believe they are being singled out for enforcement.

“People who normally go to bars … they’re going to go somewhere, so they’re shifting to traditional restaurants that serve alcohol, which is why George’s, Applebee’s and On The Border are getting flooded,” he said.

The Backyard owners Chris Cox (from left), Brian Brown and Russell Clay set up tables as they prepare to reopen with a new food and beverage certificate from the Texas Alcoholic Beverage Commission allowing them to qualify as a restaurant.

Backyard co-owner Russell Clay sweeps the stage in front of a large screen.

The Backyard co-owner Russell Clay sweeps the stage in front of a large screen.