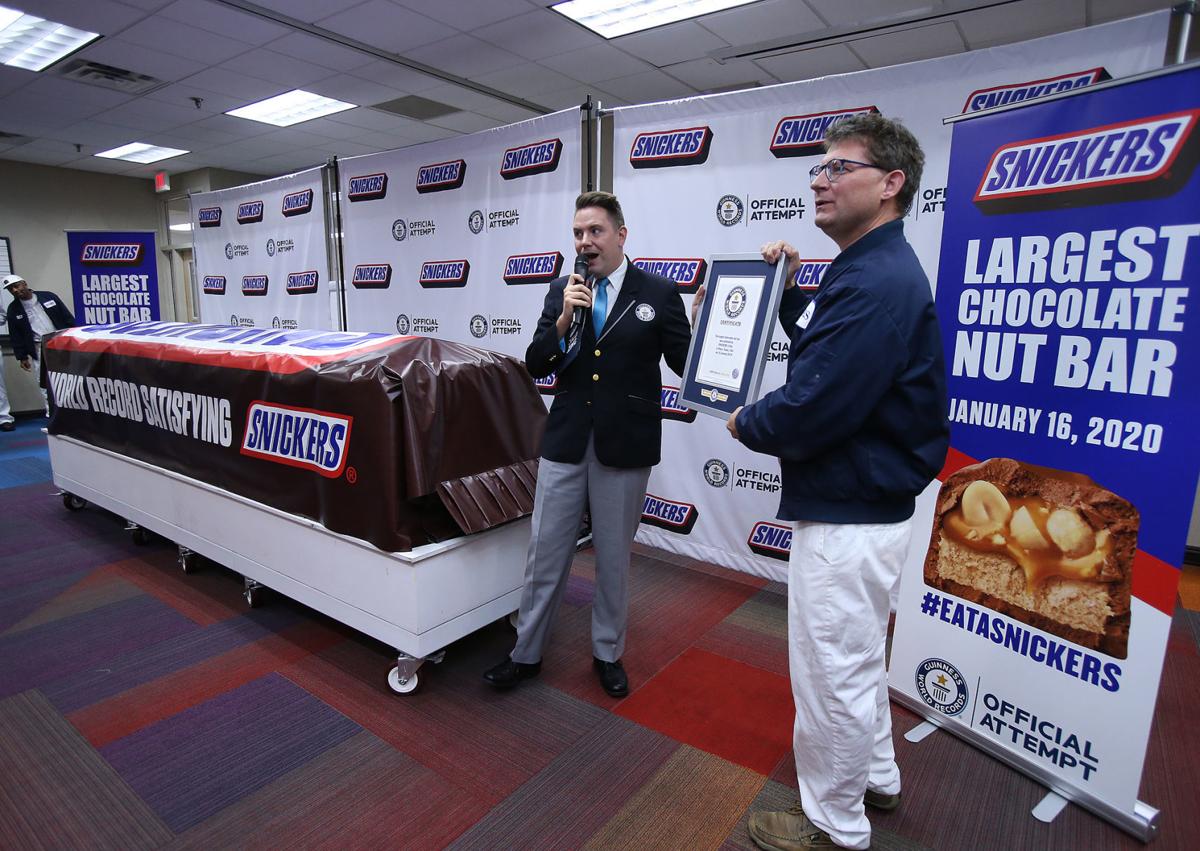 Guinness World Records adjudicator Michael Empric presents Snickers value stream manager Ruud Engbers with a certificate Thursday designating a 4,728-pound Snickers bar produced in Waco as the world’s largest chocolate nut bar. It is part of Mars’ preparation for a Super Bowl ad, and the bar will be cut up and sent to Mars plants around the country for consumption by employees. 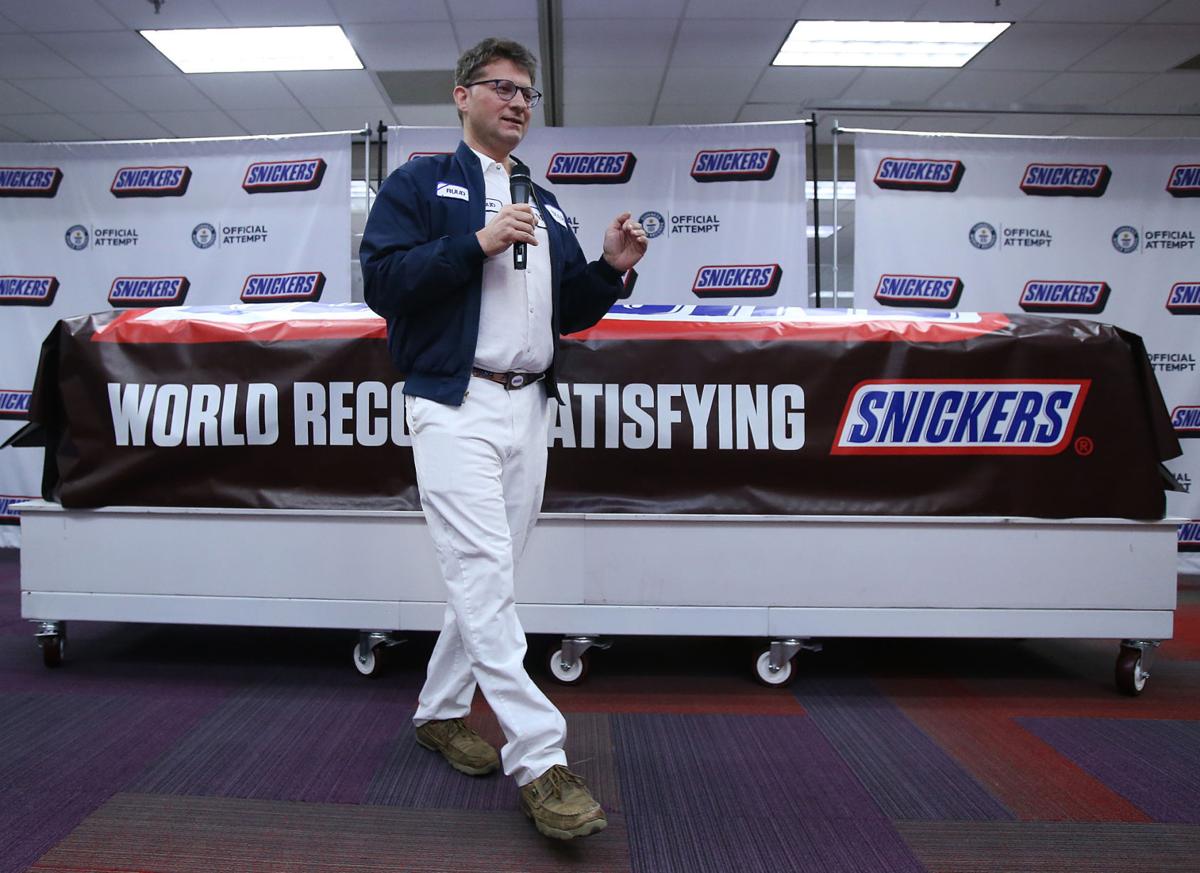 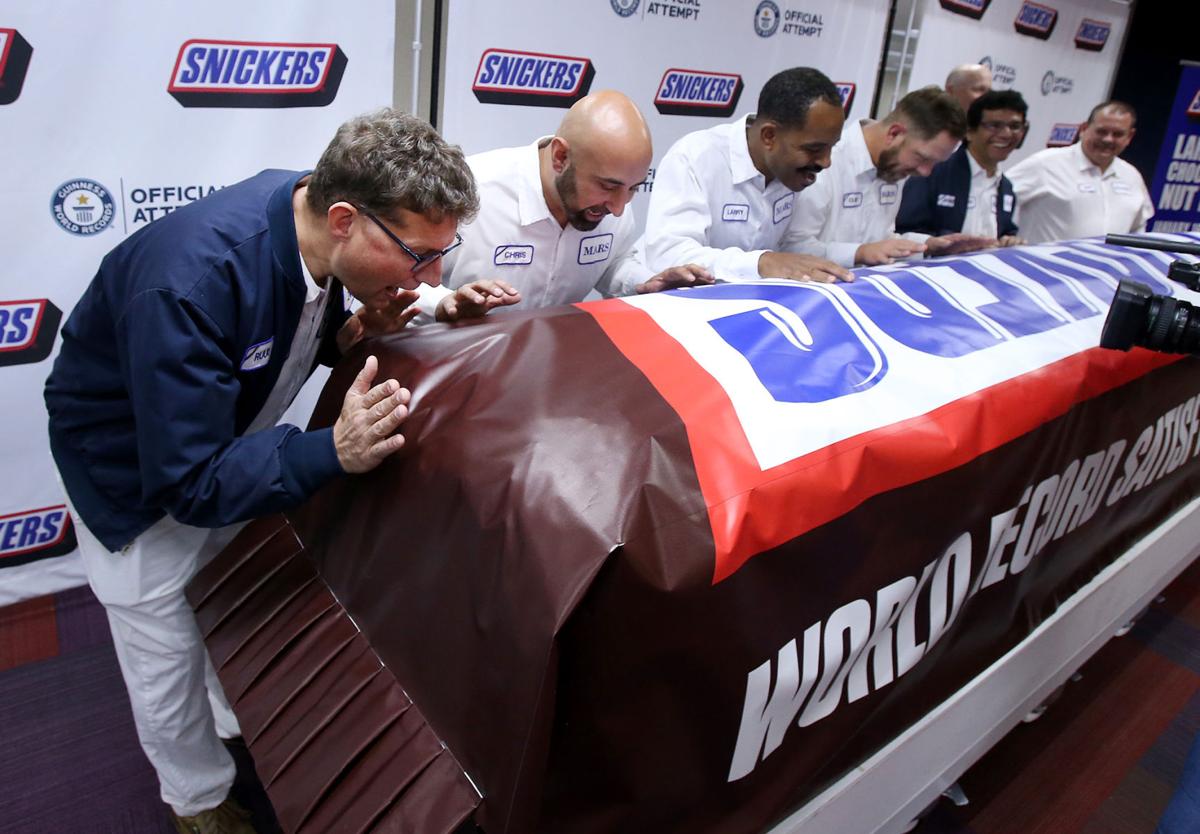 Snickers value stream manager Ruud Engbers and other Mars Wrigley employees jokingly prepare to take a bite out of a 12-foot Snickers bar produced in Waco. 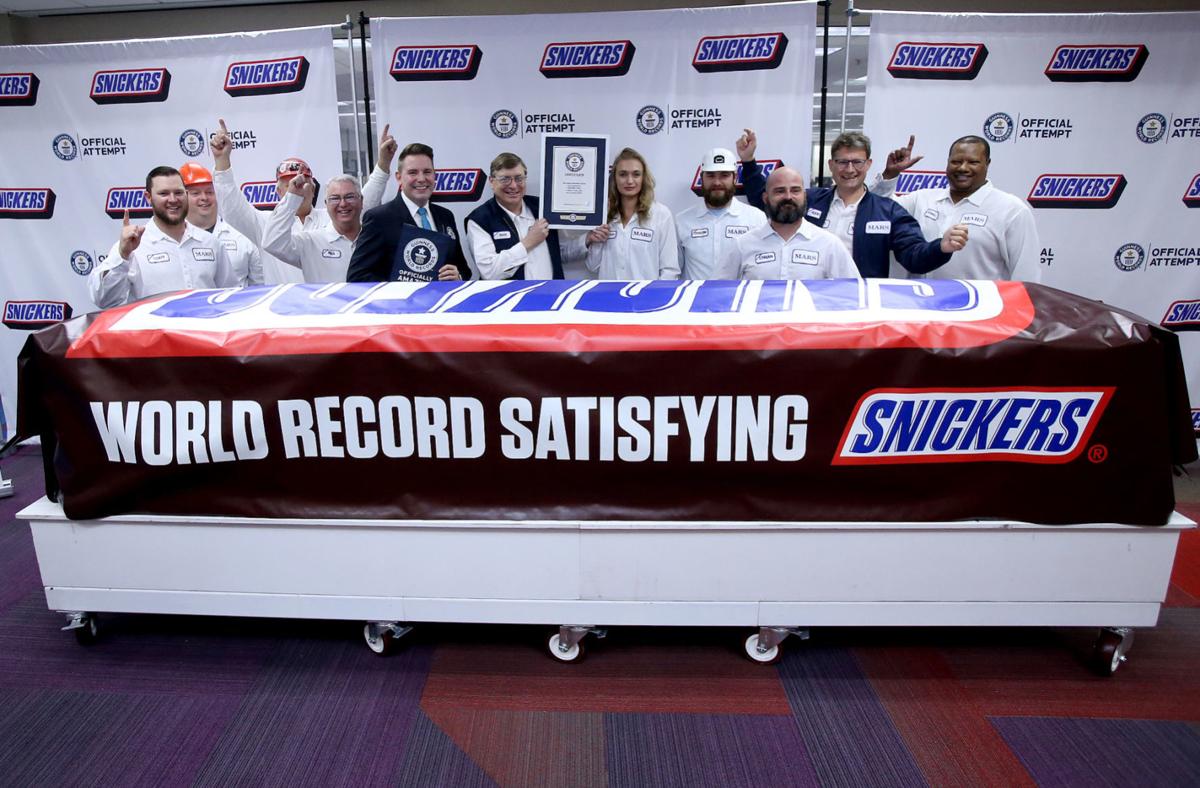 Mars locally makes more Snickers products than any other plant in the United States, and now has made the biggest. Packed with chocolate, caramel, nougat and peanuts, the 12-feet long, 4,728-pound creation no doubt would give King Kong a sugar high. The effort is part of Mars’ preparation for a new Super Bowl ad scheduled to air Feb. 2.

The treat was encased in traditional Snickers packaging for Thursday’s ceremony, which was held in a meeting room and attended by an estimated 75 Mars employees wearing their sanitary white uniforms. They chatted, cracked wise about the pending ceremony, whipped out their phones to take photos and congratulated the crew who produced the Texas-sized slab of chocolate.

Facing a time crunch, and a corporate mandate, the Waco plant assigned a 10-person team to the task of making Mars proud, crafting a replica using the same classic ingredients found in every Snickers bar, plant manager Dan Braswell said after the ceremony. The finished product measured 12 feet in length, 24 inches in height and 26 inches in width, equal to 43,000 single-size Snickers, according to a press release.

Peanuts are the nut of choice in the super-sized Snickers, though the Waco plant also makes bars with almonds and hazelnuts, Braswell said. It even produced a limited run of Snickers Pecan bars last year.

Braswell said the mother of all chocolate nut bars, the category assigned it by Guinness, would be whisked away for slicing into pieces and special delivery to Mars plants around the county and consumption by employees. Unfortunately, the bar remained packaged throughout Thursday’s formal ceremony to the disappointment of some wanting a taste or a peek.

The schedule for the ceremony called for the bar to be cut and shared with associates at its conclusion, but sources who could not be quoted by name said there apparently was a change in plans. There were assurances, however, that the packaging contained a genuine Snickers bar.

Empric, with Guinness and based in New York, said he arrived a day earlier to visit the plant. He was impressed by what he saw and by the “delicious” smell of chocolate that greeted his visit to the production floor. He said he could not remember experiencing a more pleasing aroma. But he also reminded that he was there on assignment. He is Guinness’ “eyes and ears on the ground,” and had stringent guidelines to apply in his judging.

The Buffalo, New York, native was making his first trip to Waco, though he had visited other Texas cities in his capacity as adjudicator for Guinness World Records. He said his employer created a new category in responding to Mars’ request for judging and inclusion in the publication: chocolate nut bar.

In establishing criteria to judge the entry, Guinness set the bar for the bar at 220 pounds, Empric said. The Snickers candy had to weigh at least that much to receive consideration. Mars Wrigley Confectionery obliviously obliterated that threshold with its 2-ton concoction. Asked if he was shocked by what Mars unleashed, he said nothing surprises him anymore.

Ruud Engbers, a native of Holland who serves as Snickers’ value stream manager, introduced team members involved in producing the record-setting Snickers bar. He said the plant first considered building a candy bar 4 feet in length but scrapped that notion as an underwhelming goal, considering the plant’s presence in Texas, “where everything is bigger, as I was always told.”

The goal, and the bar, steadily grew over the past week or so.

“Within the bar is more than 1,200 pounds of caramel, nougat and peanuts combined with 3,500 pounds of chocolate,” according to a Mars press release.

The unveiling of the record-setting Snickers bar coincides with the 90th anniversary of the brand, according to the press release. The Waco plant, which also produces Skittles and Starburst products, recently underwent a $30 million expansion that pushed its footprint to 750,000 square feet.

The pleasures of candy are good news in Waco, home to a 750,000-square-foot Mars Wrigley Confectionery plant that produces Snickers, Skittles and Starburst products.

Guinness World Records adjudicator Michael Empric presents Snickers value stream manager Ruud Engbers with a certificate Thursday designating a 4,728-pound Snickers bar produced in Waco as the world’s largest chocolate nut bar. It is part of Mars’ preparation for a Super Bowl ad, and the bar will be cut up and sent to Mars plants around the country for consumption by employees.

Snickers value stream manager Ruud Engbers and other Mars Wrigley employees jokingly prepare to take a bite out of a 12-foot Snickers bar produced in Waco.