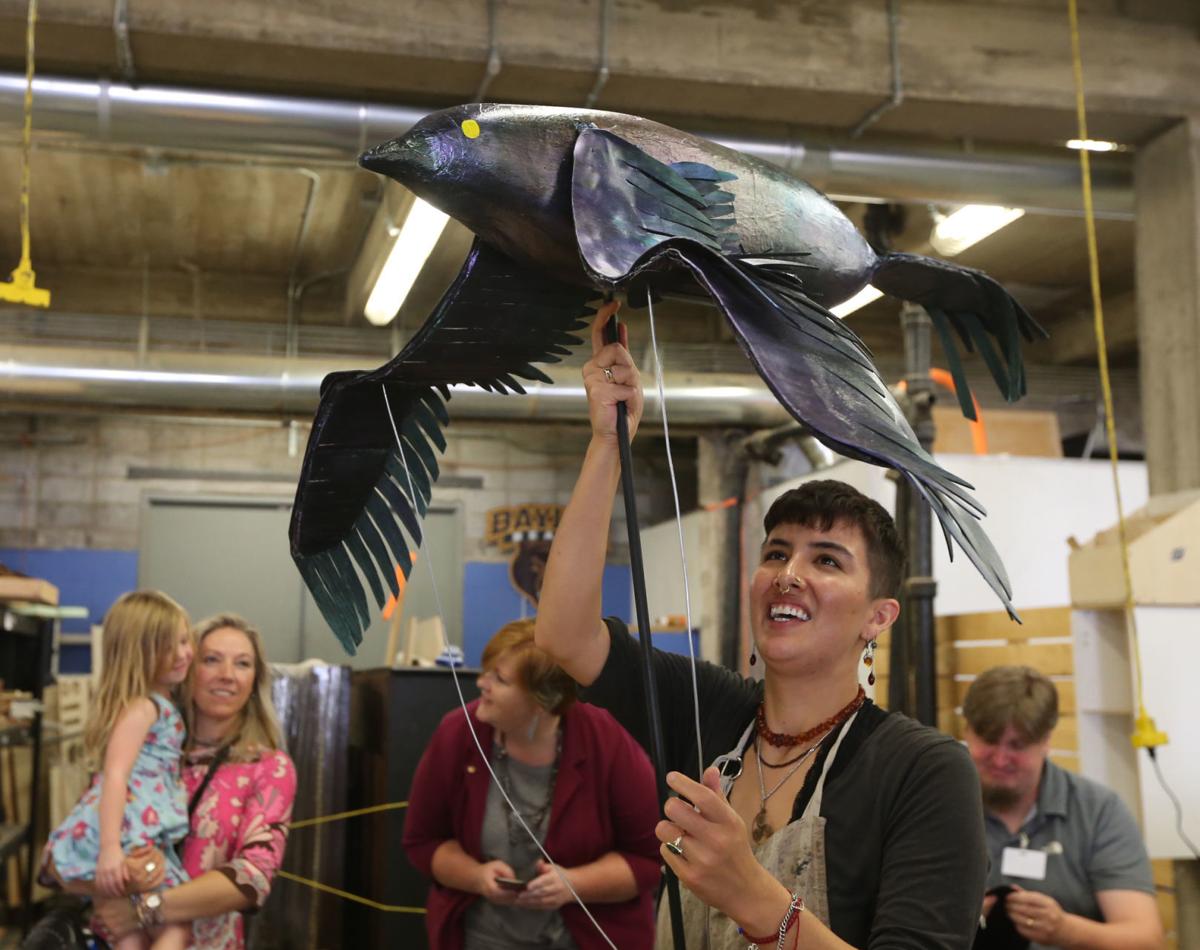 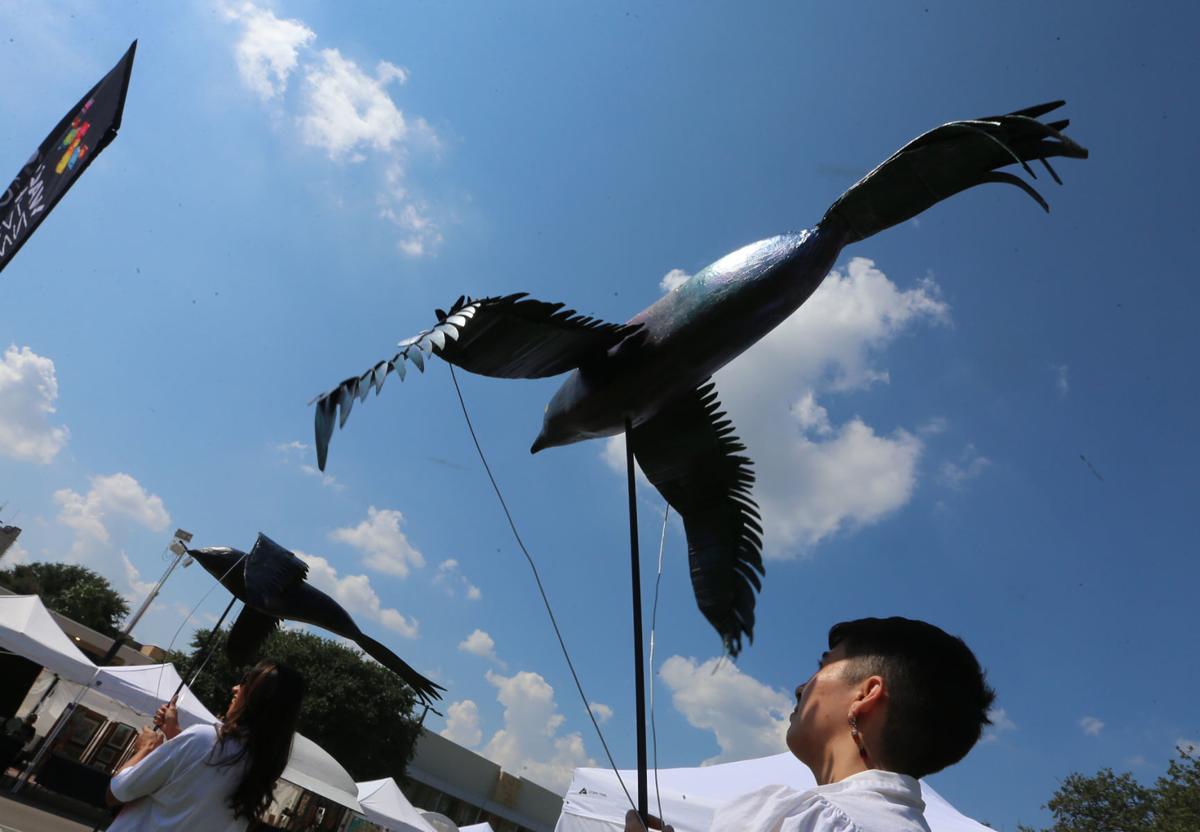 PJ Kelly flies one of the grackle puppets during their debut at the Waco Cultural Arts Fest on Saturday. 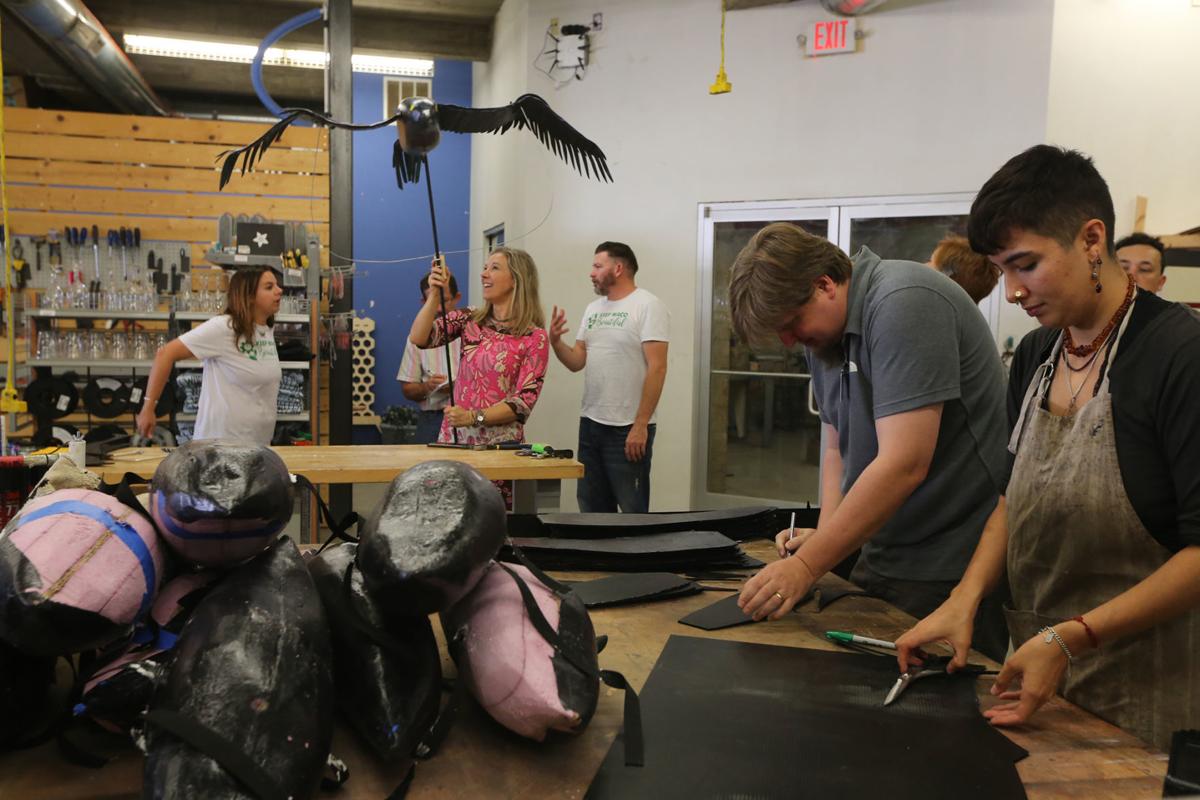 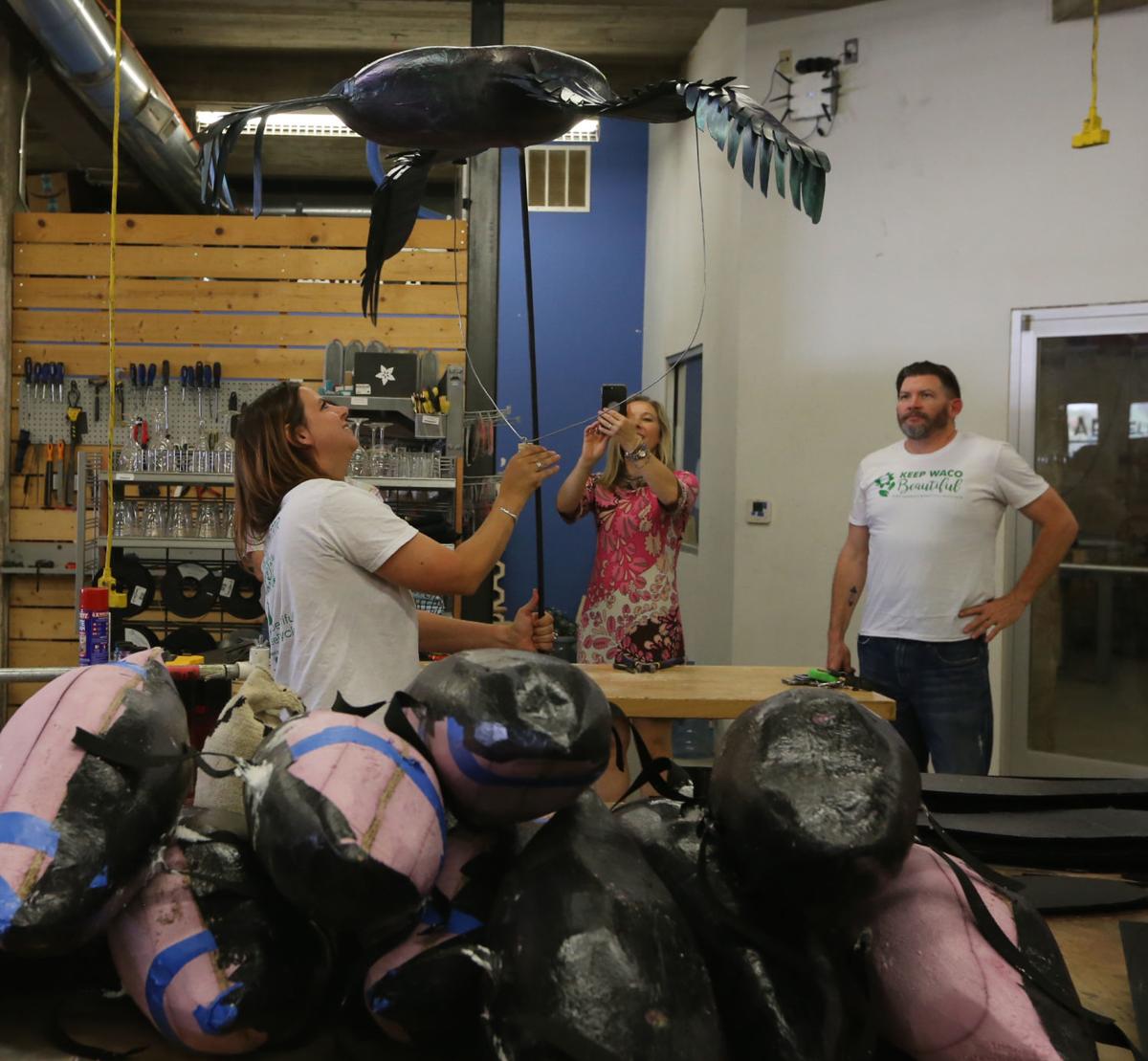 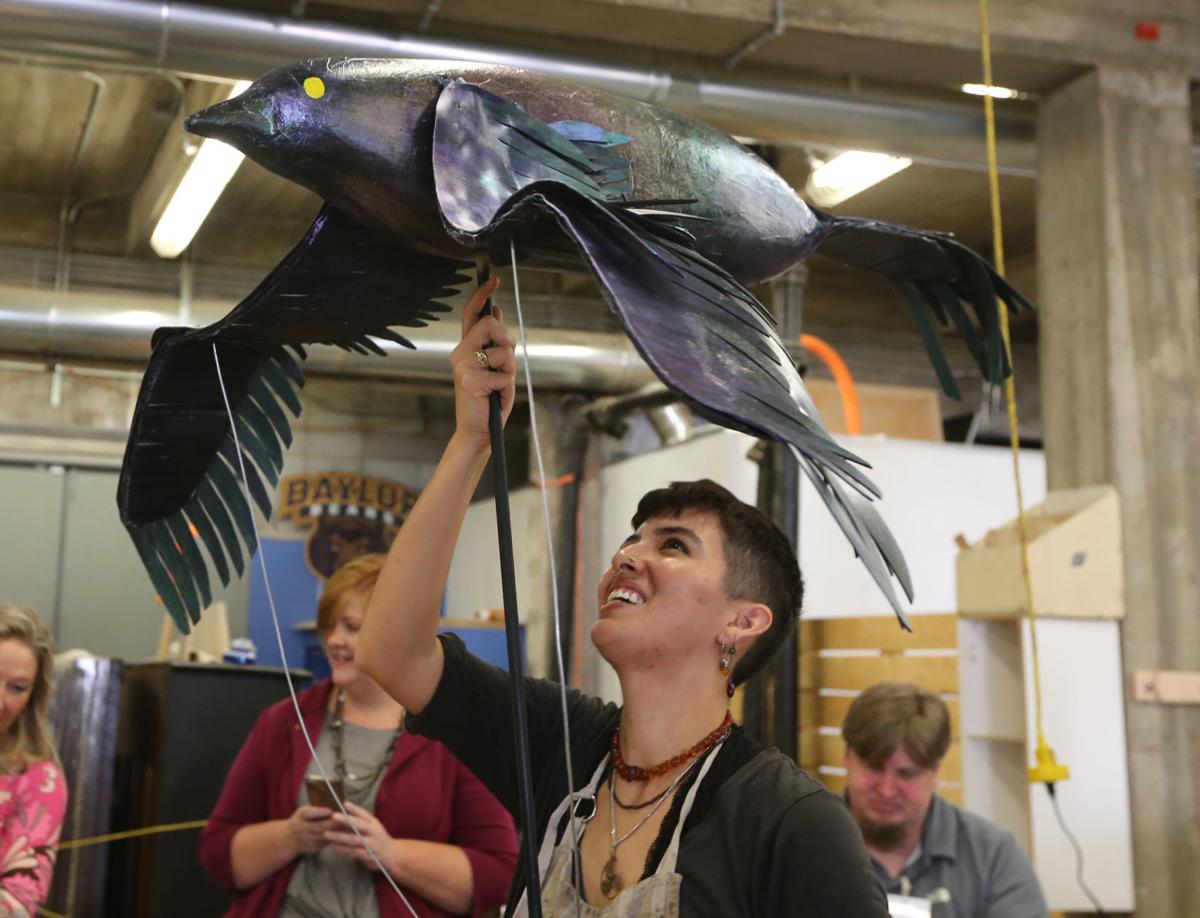 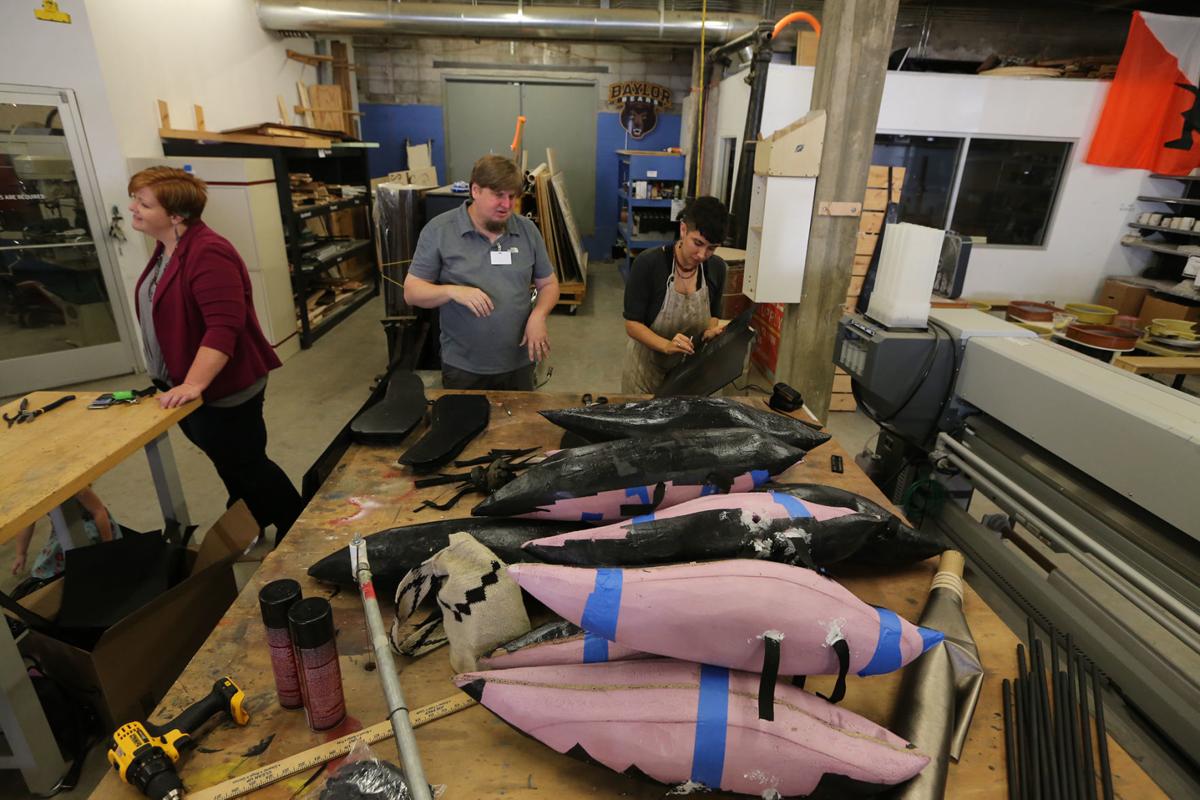 A stack of shaped bird bodies await a coat of black and iridescent paint. 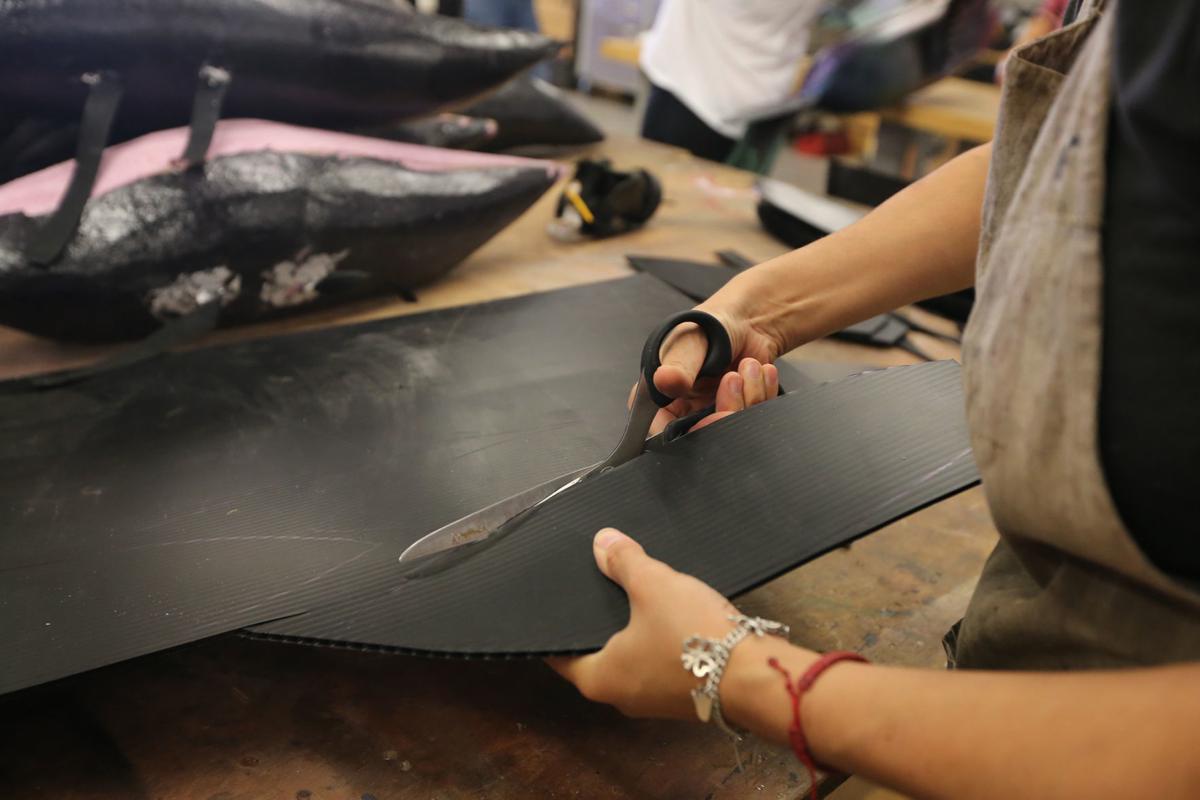 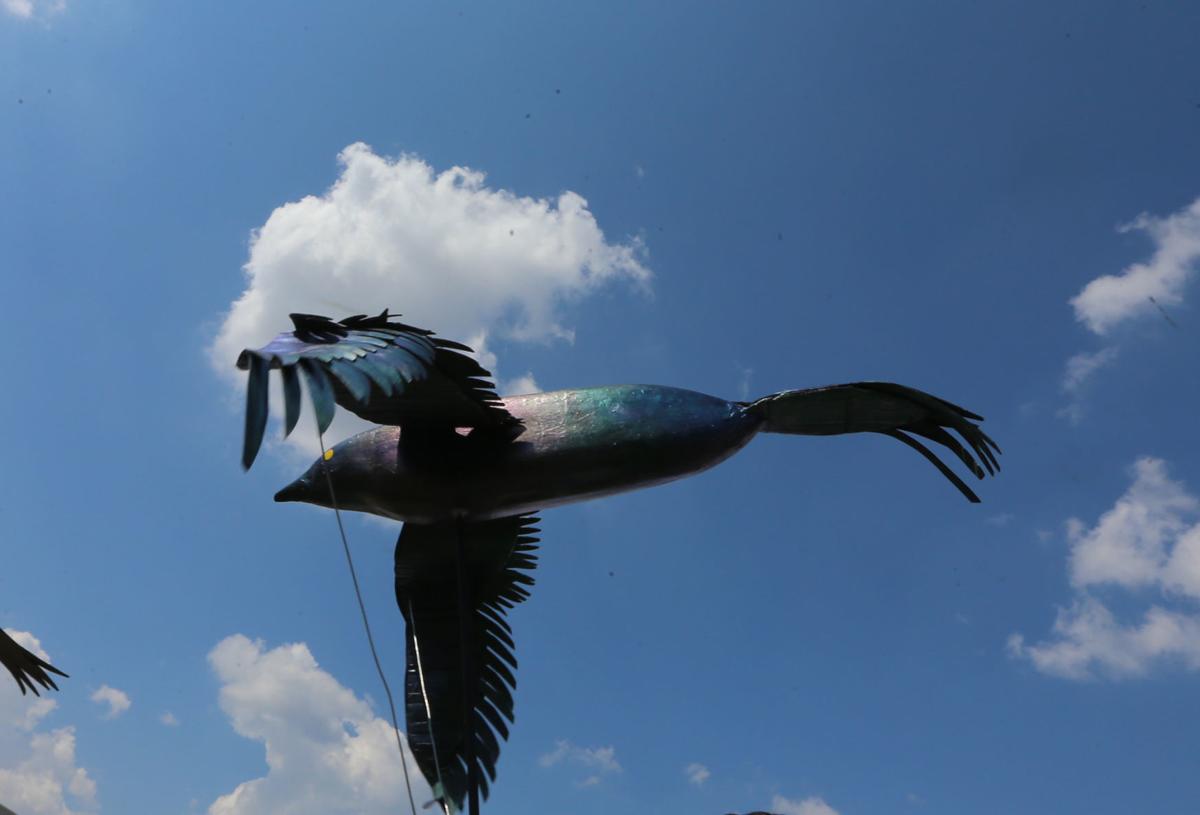 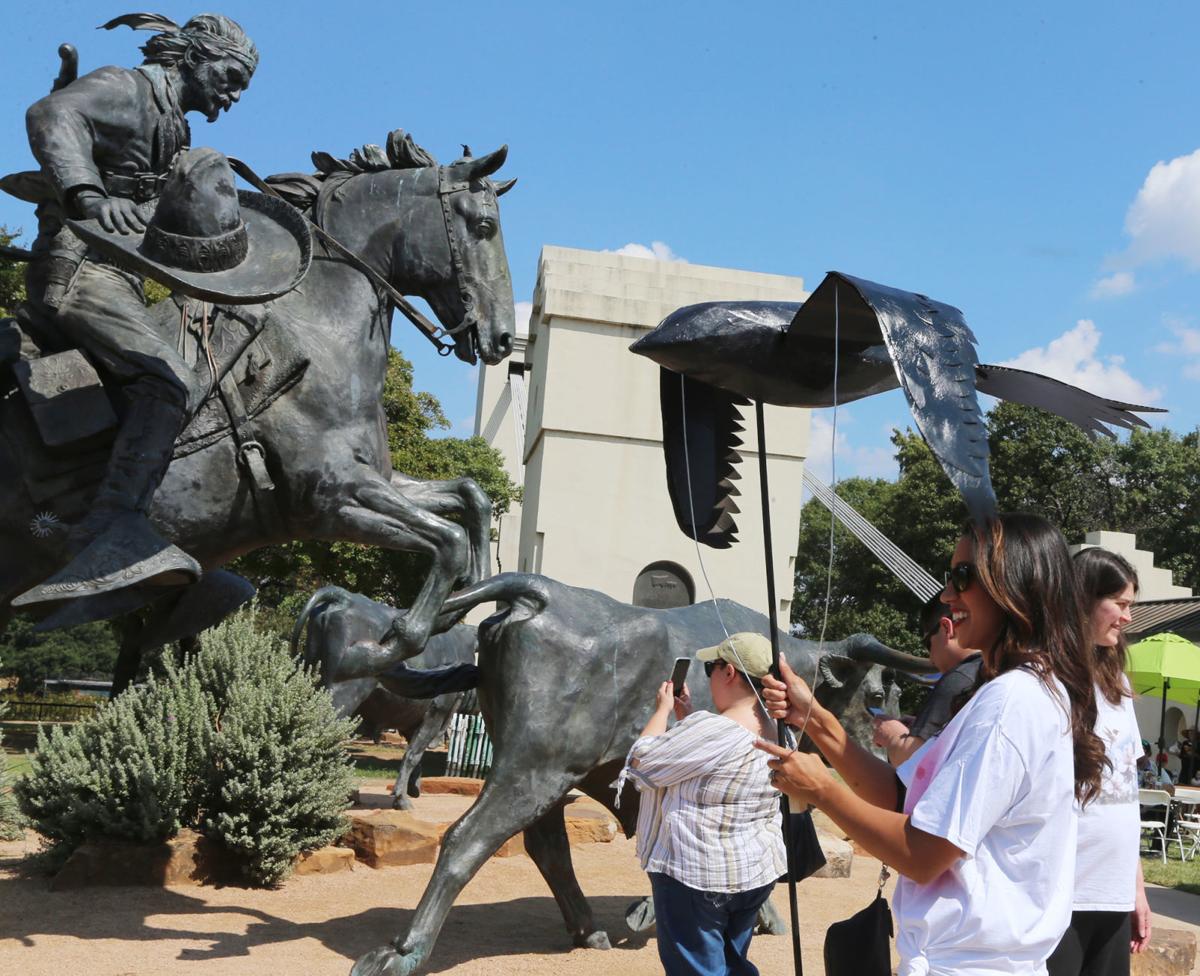 Volunteer Taina Maya parades with one of the grackle puppets during the Waco Cultural Arts Fest.

It may sound like the latest sign of the apocalypse, but the big birds are puppets and the harbinger of more Waco-connected wildlife in city parades.

The grackle puppets, supported by a central rod and with a wing-flapping mechanism, are the first products of a $10,000 Mid-America Arts Alliance grant to build oversized, Waco-themed puppets for use at public events such as festivals and parades.

Puppet designers and makers James White and PJ Kelly were working hard late this week to finish six puppets for the weekend’s Cultural Arts Festival, with another four to six on the way for Baylor homecoming.

“Whether you love them or hate them, they are a Waco thing,” White said of the choice to make grackles. “So let’s own ‘em with gusto.”

A 2018 Juneteenth festival with a 14-foot “Fairy Art Mother” puppet planted the seed with White for some Waco parade puppets as a way to add some imagination and interest to city parades that often devolved into little more than decorated cars and trucks carrying waving people.

“It would be great to have more engaging things in our parades,” White said.

Conversations in the weeks that followed sprouted wings, and in January, Waco nonprofit Creative Waco submitted the Mid-America Arts Alliance grant proposal to introduce more giant puppets. In addition to adding interest to public events and serving to promote local arts nonprofits, the grant proposal also added an environmental component in that puppets would be made from recycled materials, and an educational dimension provided in puppet-making workshops.

Creative Waco won the grant, and work started last month with White, 46, and Kelly, 27, leading design and building at Maker’s Edge Makerspace. White, a Department of Veterans Affairs ratings specialist, trained in puppetry under The Jim Henson Co. puppeteers and has worked with puppets for years. Kelly’s creative design work, on the other hand, lies more in film and stage costuming. She has designed dance costumes in productions by Waco dancer L. Brooke Schlecte and has worked several seasons as costume ager and dyer for the television series “Fear of the Walking Dead.”

Tackling the challenges of a movable bird puppet has been part of the fun, she said.

“Very seldom do I work on something that’s all figured out from the get-go,” she said.

Working from a model crafted by White, the two puppet fabricators developed a large, relatively lightweight bird puppet with wings a puppeteer can flap. Layers of insulation foam glued together then shaped form the bird’s body. Wings were cut from recycled corrugated plastic, slit at intervals to improve flexibility, with individual feathers from craft foam laid on top.

The birds are painted black, but with a faint iridescent sheen that was Kelly’s idea.

“As a kid, I was obsessed with picking up grackle feathers because of their iridescence,” she said.

Stiff wire attached to the wings and a slide on the supporting rod allows a puppeteer to put the grackle’s wings in motion. About 16 hours of work went into the first few birds, but that time has shrunk as bird builders become familiar with the technique, Kelly said.

Keep Waco Beautiful will provide the volunteer bird flyers and will retain the puppets after their debut this month. Executive Director Ashley Millerd said her weekend workers were pleased to hear about their assignment.

“They’re super excited: ‘We’re not picking up trash!’ they said,” according to Millerd.

Volunteers will work their grackle puppets for about a half hour during their Cultural Arts Festival shifts, and a relay of volunteers is being considered for the two hours of Saturday’s homecoming parade, Keep Waco Beautiful President Randy Truett said.

Will there be any grackle choreography?

“The plan is to minimize eye-poking and concussions,” Truett said. “If there’s no blood lost or scraped knees, it’ll be a success.”

The oversized grackles will belong to Keep Waco Beautiful for use in future events, and Millerd sees possibilities for family-oriented activities and the organization’s ongoing education efforts about sustainability.

Creative Waco Executive Director Fiona Bond said ideas for the next giant parade puppets include a mammoth and Waco founder Jacob de Cordova. The nonprofit also is looking for more community sponsors and volunteers to work the puppets, with the idea that giant puppets will become a fixture in Waco parades.

“We’d like to see all the puppets in all the parades,” Bond said.

The grackles will flutter and fly at 2:30 p.m. Sunday at their final appearance at the Waco Cultural Arts Festival at Indian Spring Park. They will return in greater numbers Saturday for the Baylor homecoming parade.

PJ Kelly flies one of the grackle puppets during their debut at the Waco Cultural Arts Fest on Saturday.

A stack of shaped bird bodies await a coat of black and iridescent paint.

Volunteer Taina Maya parades with one of the grackle puppets during the Waco Cultural Arts Fest.