What’s 12 feet when compared to a Mamenchisaurus that stood 11 feet at the shoulder, topped by a 30-foot neck that could stretch into a tree’s top branches? Or a Supersaurus, whose leg bones stand more than 13 feet? How about the head and neck of an Argentinosaurus — whose body, if attached, would extend another 100 feet — peering from an exhibit wall to greet incoming visitors?

The Mayborn exhibit “The World’s Largest Dinosaurs,” created by the American Museum of Natural History, takes viewers into the super-sized world of sauropods, giant plant-eating dinosaurs that lived more than 100 million years ago.

The exhibit’s centerpiece is a life-size replica of a 60-foot-long Mamenchisaurus, whose bones were unearthed in China, where the touring exhibit last stopped before its Waco destination. The dinosaur’s neck stretches for half its length and its smooth left side doubles as a screen on which visual projections of its internal organs show where they fit and operated.

The sauropods were the largest land creatures for 140 million years, overlapping the Jurassic and Cretaceous periods — the latter the period during which the Mayborn’s T. rex lived — before they died out.

So how did such huge animals survive?

Curated by the AMNH’s Mark Norell and Martin Sander from the University of Bonn in Germany, the exhibit breaks down what the fossil record and comparative anatomy of today’s birds and reptiles suggests.

To fuel bodies so large required constant eating of nearly a half-ton of vegetation a day, or enough ferns, reeds, leaves and tree branches to fill a 5.5-foot cube. A five-foot cylinder filled with foliage shows one hour’s worth of eating, although the absence of molars and presence of incisors in sauropods make paleontologists think that the animals chomped and swallowed more than chewed, leaving digestion to their gut.

Supplying enough oxygen for giant bodies required a different mechanism than that found in mammals. Scientists found answers in birds, whose bones and muscles must be light enough for flight, and crocodiles, who stay underwater for long periods of time. Those animals have lungs that can simultaneously take in air while internally supplying oxygen to the bloodstream.

As for the type of heart needed to pump blood through yards of veins, paleontologists believe today’s giraffes offer clues, with a large heart and venous system designed to slow the rush of blood whenever a giraffe lowers its head to eat or drink.

Despite their size, sauropods hatched from eggs no larger than a volleyball and while they grew phenomenally fast after hatching, their brains remained tiny — approximately one-tenth the weight of a human brain.

The giant dinosaurs likely had smooth skin, without a suggestion of feathers or fins found on other dinosaurs, which was possibly slightly colored, either for camouflage or mating. David Levy, overseeing the exhibit installation, noted that as large as the sauropods were, they still had some enemies. “They were prey to certain vicious raptors,” he said.

Interactives throughout the exhibit illustrate the biomechanics of the large creatures and although it’s designed more for students and adults, preschoolers will still be impressed with the scale of the animals studied, said Rebecca Nall, the museum’s assistant director for exhibits.

The exhibit runs through September and the museum’s Tinker Tuesdays educational programs, 10 a.m.-noon Tuesdays in June, and Mini-Mondays, 10-11:30 a.m. on the last Monday of the month, will be dinosaur-related, Nall said. 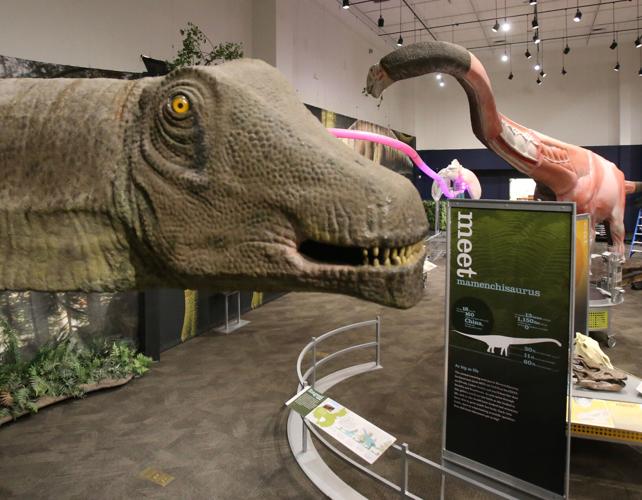 The head and neck of an Argentinosaurus greet visitors to a world of oversized dinosaurs in the Mayborn Museum touring exhibit “The World’s Largest Dinosaurs,” which opens Saturday. 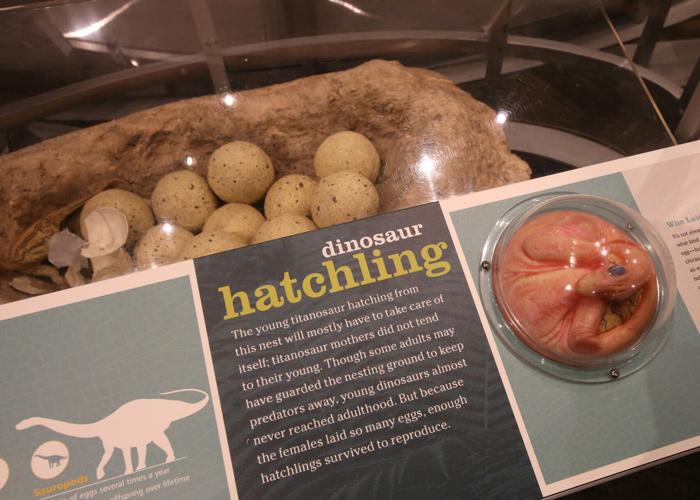 Despite their great size as adults, most sauropods hatched from small eggs. 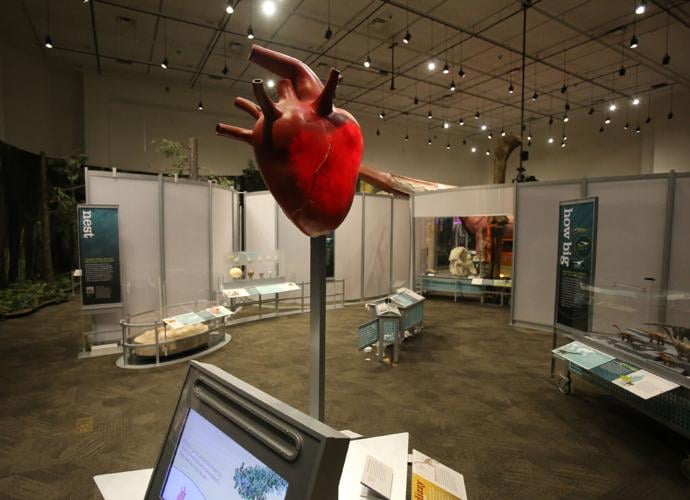 A model suggests how large a sauropod's heart had to be to keep blood circulating in its giant body. 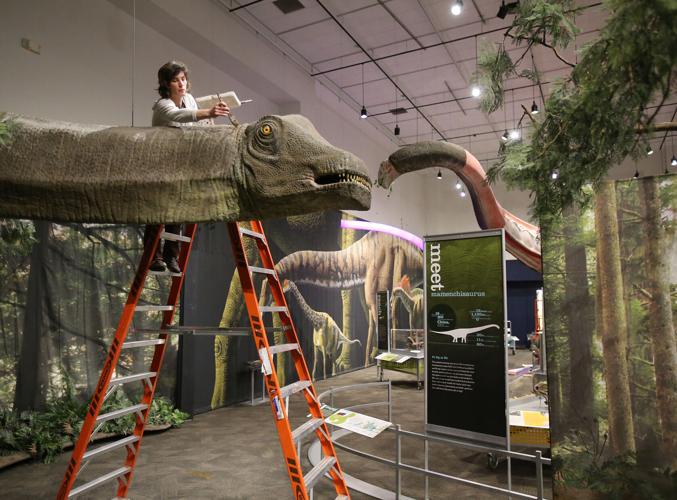 An Argentinosaurus (front) and a Mamenchisaurus (right) greet visitors to a world of oversized dinosaurs in the Mayborn Museum touring exhibit “The World’s Largest Dinosaurs,” which opens Saturday.