Ask Doreen Ravenscroft on whether this year’s Waco Cultural Arts Fest will return as planned in October and she laughs. “It’s hanging on the calendar — it’s there hanging with its fingertips,” she said.

In a cruel twist, the shared experiences and attendance that help the arts thrive in a community are also the conditions most likely to spread the novel coronavirus that causes COVID-19. And communities that need encouragement and hope to pull through a crisis find the arts that have supplied that in the past unable to respond as they have in the past.

The last four months have found Waco artists and musicians scrambling to improvise new ways to bring in revenue while others are thinking of ways to assist.

Waco arts nonprofit Creative Waco has worked to expand artist access to potential customers by establishing an online marketplace, Make it in Waco, and a $25,000 Make it Through Corona fund for grants for local artists.

Both have worked to some extent, says Creative Waco executive director Fiona Bond. The online marketplace continues to expand, both in participating artists and shoppers, while 19 artists and musicians have received Make it Through Corona grants.

With businesses, restaurants and bars starting to reopen gradually beginning in May and continuing into June, many in Waco’s arts community were cautiously optimistic that a path to full reopening was at hand.

Then McLennan County was hit with an explosion in new COVID-19 cases starting in late June that unravelled much of that progress, causing performance and camp cancellations and a re-closing of bars. The latter was a gut punch for local musicians, who’ve seen their evening venues of clubs and nightspots shuttered by state order, then reopened with limits, then shut down again. “The closing of the bars was really a major blow to them,” Bond said.

The loss of customers due to state and local capacity limits and a general reluctance for many to venture indoors, even with masks, has affected shops where artists have sold their creations. Downtown Waco’s White Elephant, where several Waco artists and artisans had their wares, recently closed while others like Cultivate 7twelve and the Kieran-Sistrunk Fine Art Gallery have reduced hours or limited access to appointment-only.

Major summer events such as the Margarita & Salsa Festival and Labor Day Weekend’s Westfest were recently cancelled as were such statewide attractions as the State Fair of Texas in Dallas and the Austin City Limits Festival in Austin.

“There’s a lot of discouragement right now. There’s a realization normality is not around the corner,” Bond observed.

For the Waco Symphony Orchestra, which saw its final two spring concerts cancelled by COVID-19 concerns, it means no in-person fall concerts, but those spring 2020 concerts moved to 2021 instead.

The 2,200-seat Waco Hall would go to 400 seats while onstage spacing required for orchestra players — one string player per stand, additional shields around flute players — would limit ensembles to 30 to 40 musicians. That’s about half to one-third the size of the orchestra needed for a typical concert.

“You get it on both ends. There’s not enough seats to support a concert and not enough people onstage to perform one,” Heyde said. “There’s no chance this will be resolved by fall.”

Though some orchestras are turning to livestreamed performances, the Waco conductor doesn’t see it as a viable alternative in the long run. “I don’t think that will be the future of arts presentation . . . There’s something about being in the room in a communal setting and experiencing it with your neighbors,” he said.

Outdoor concerts are another option, but social distancing for players means a considerable extra expense in miking individual players to create sufficient volume in an outdoor setting, he observed.

Still, the WSO and the city of Waco are discussing a possible free and streamed concert, carried over the city’s cable channel, sometime in early fall as a community morale-booster. There’s also the possibility of smaller classical concerts, regular releases of short music videos by local and area players and new ways of presentation not yet determined.

“I’m not pessimistic. We’re going to figure this out,” Heyde said.

For the Waco Cultural Arts Fest and its founder Ravenscroft, the event is still on the calendar for Oct. 2-4. The multifacted arts event, whose umbrella covers four subfestivals, generally draws several thousand attendees to Indian Spring Park in early October.

This year’s version won’t have the {254} Dance Festival, which was canceled due to the difficulty of dancers getting together to rehearse, and the Film Festival and WordFest may be virtual ones, streamed online for fans. Tents for the remaining music and visual arts festivals may need to accommodate fewer activities to allow greater spacing, but that’s doable, Ravenscroft said.

State and local COVID guidelines on gatherings of more than 100, masking and sanitation requirements, availability of performers and the possibility of another local COVID case surge are all variables that could affect whether organizers will give it a green light in upcoming weeks.

As Ravenscroft noted, “it changes every week — every day sometimes.”

COVID exposure among the cast caused the Waco Civic Theatre to stop its summer plans for performances of “You’re A Good Man, Charlie Brown” and “Emma,” but the theater is contemplating an outdoor stage behind the theater that could be used for performances, even projection of movies.

The Art Center of Waco shifted its children’s arts camp from in-person to online and has put out bids to start work on renovation and construction for its downtown facility on South Eighth Street.

Creative Waco’s Bond said a second appeal for contributions to the Make it Through Corona fund is on its way to provide more help for artists. “We’re almost through with the first round of funding and we’re going to launch again. We don’t want to backslide.”

More art and music projects are on the way. Some musicians have taken to playing private patio parties in lieu of regular bar or restaurant gigs, she noted.

Several projects are in the works as well, including one commissioned by Park Lake Baptist Church in memory of two-year-old Frankie Gonzalez and a possible project with The Cove inspired by the ArtPrenticeship program of the last two summers.

Until a new equilibrium is reached in this COVID age, the small things can add up. “Sometimes in the arts a little bit goes a long way,” said Bond.

Waco artist Will Suarez and Joe Rooster recently completed a “Keep Going” mural for Apex Roasters at Sixth Street and Jackson Avenue. That theme initially was intended for tourists visiting the Magnolia Market at the Silos to continue their exploring into more of Waco, he said, but the phrase has taken on an additional meaning as Waco — and its artists — plow ahead.

Will Suarez and Joe Rooster recently completed a “Keep Going” mural at Sixth Street and Jackson Avenue near the Magnolia Silos. 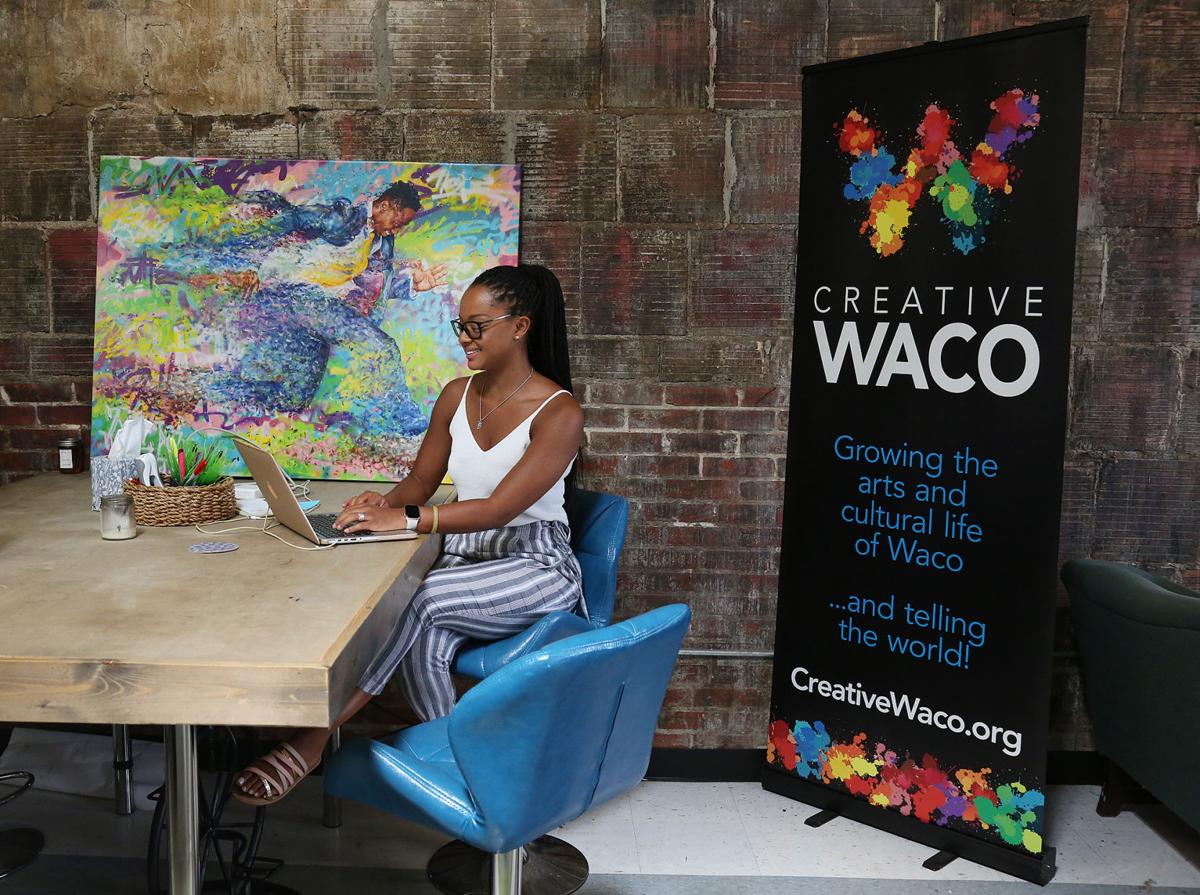