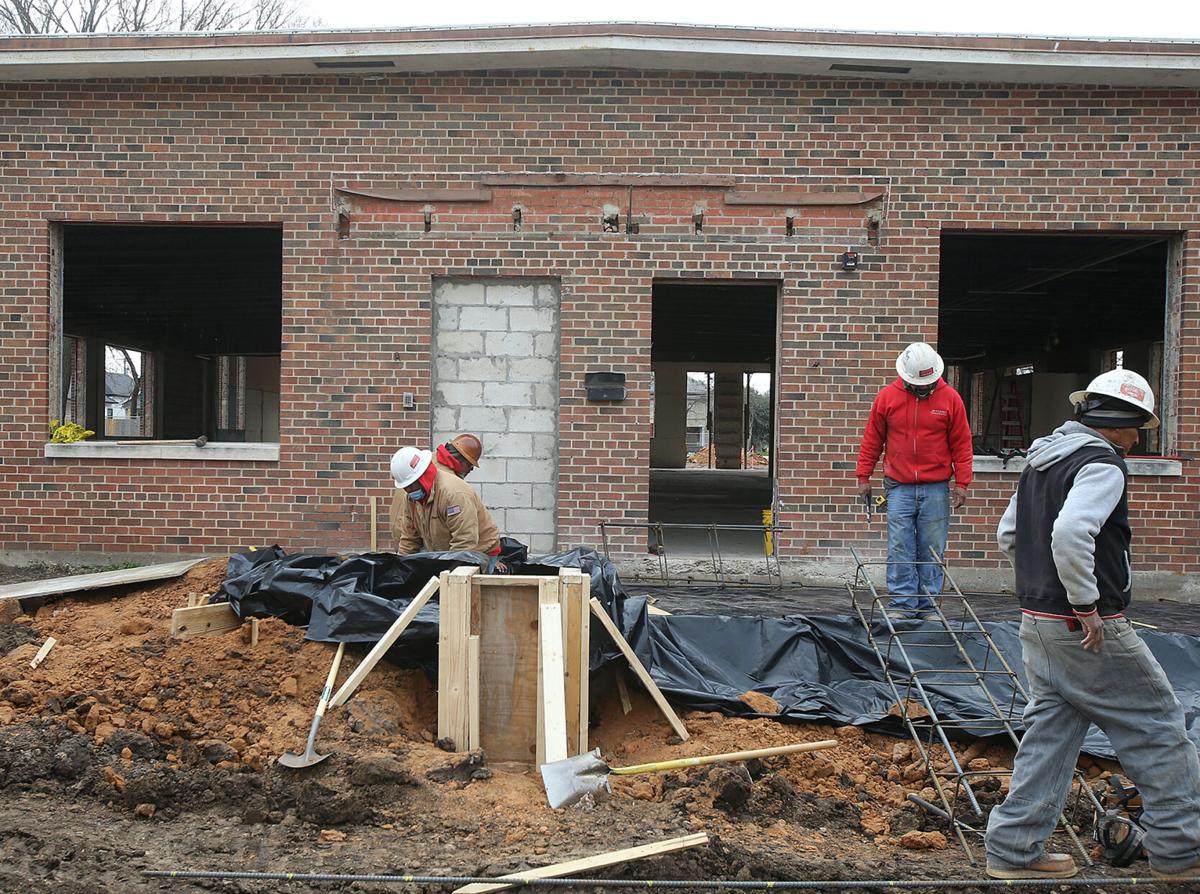 Mazanec Construction workers prepare the building’s front for a decorative facade as work on the Art Center of Waco’s new home starts. 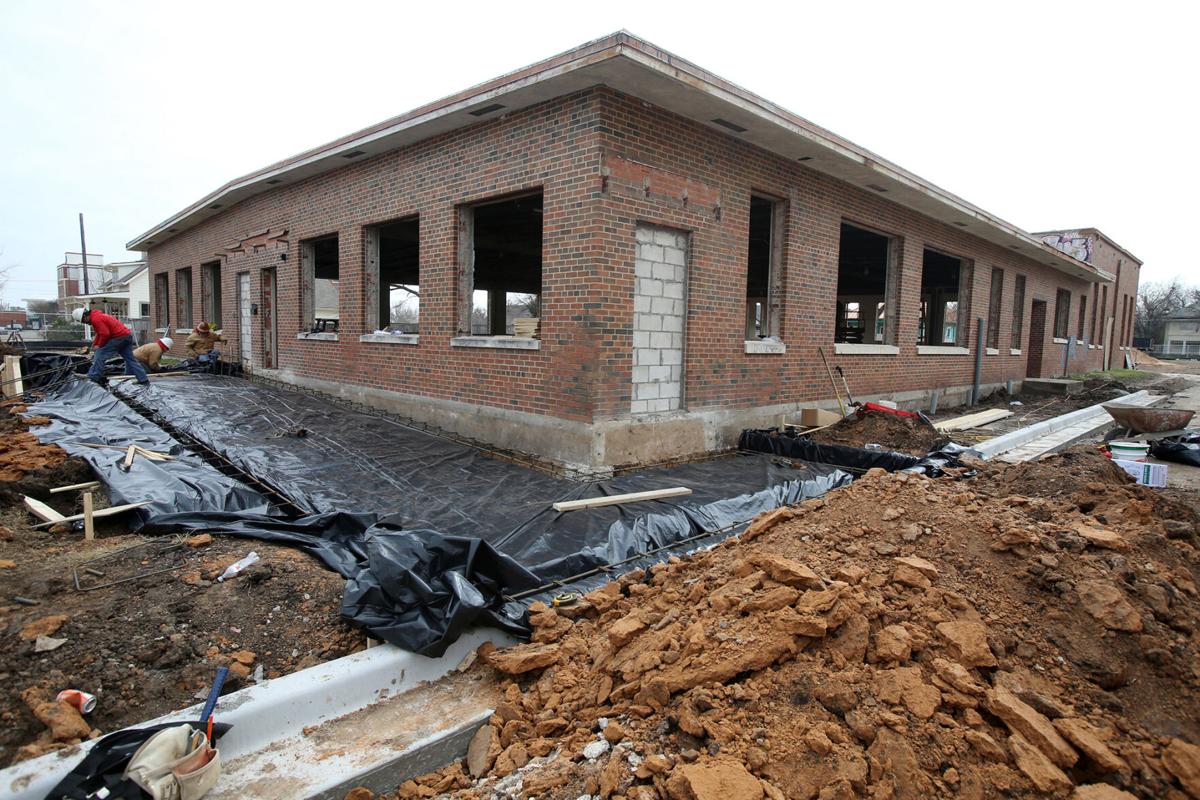 Workers level the front grounds of a former community daycare center for a sidewalk to the new downtown location of the Art Center of Waco.

The downtown Tax Increment Financing Reinvestment Zone 1 board voted Thursday to award $315,000 to the Art Center of Waco for exterior work on the center’s new downtown location at 701 S. Eighth St., less than the nonprofit had sought.

Art Center Waco asked for $560,000 to aid the $3.1 million project, but city staff recommended a lower amount, citing other potential TIF-supported projects on the horizon and an expected drop in future TIF revenues.

The funding, which requires approval by the Waco City Council, still delighted Art Center of Waco board member Lisa Monroe. Monroe, chairman of the center’s building committee, joined RBDR Architect partner Grant Dudley in pitching the Art Center request to the TIF board in a Zoom teleconference meeting.

The TIF funding represents about 10% of the project’s cost and will serve as a shot in the arm for the final $1 million in fundraising needed for the renovated building and grounds, she said.

Waco ISD has been a part of the TIF Zone 1 since the beginning, contributing more than $7 million in tax revenues annually — nearly half of the TIF’s tax increment revenue. But current state law forbids school districts from participating, and Waco ISD must leave the district when the original partnership expires in December 2022. After that, officials estimate annual TIF revenues will drop $14 million in the 2021-22 fiscal year to $6.7 million in fiscal year 2022-23.

George said after the meeting that the upcoming limits on TIF revenues was a major factor in the staff recommendation.

“We have been very fortunate to have the WISD in TIF Zone 1 for so many years,” he said. “(The new art center) is a fantastic project. Maybe two or three years ago, we could have funded the full request . . . but we have to be frugal with the funds we have.”

He added that there are upcoming projects he could not yet identify publicly that would also merit TIF consideration.

The TIF board made its decision with work on the new Art Center of Waco already underway. Mazanec Construction Co. last month started construction and renovation of the center’s new location, a one-story brick structure that once served as a community day care center. The project is targeted to wrap up by the end of July.

The center will have space to show works from its newly acquired Flo Cameron Foundation Collection, and the building’s climate control system will allow it to meet the needs of national and regional touring shows, Monroe told the TIF board.

Board member and McLennan County Commissioner Will Jones asked about private support for the project, event capacity and parking. Monroe told him the center has already purchased the property for the art center complex, with “cash in the bank” from private donors and foundations and a secured loan committed to the project.

The center will be able to accommodate about 280 people for indoor events and more for outdoor ones, including weddings and banquets. Dudley said the building was designed with such events in mind, given the limited indoor capacity of the center’s former home. The new center’s current design also offers sufficient room for social distancing, Monroe added.

The new center will have about 23 parking spaces and Dudley said discussions are in progress with the neighboring New Branch Worship church for use of its parking spaces for special events.

The center’s funding request included a statement from City Center Waco’s board of directors who gave the project its “highest recommendation.”

City staff members, however, recommended a smaller grant of $315,000, noting that amount would comprise about 10% of the project’s cost and that the center, operated as a nonprofit organization, would not bring in future property tax revenues for the TIF district.

The TIF board voted unanimously on a motion by board member Kyle Deaver to approve the $315,000 figure. George said the TIF and the Art Center of Waco would set up and sign a contract on the funding agreement, which would then be sent to the city council for its approval.

After months where the major question for McLennan Theatre was whether COVID-19 would affect a production, the question changes at this weeken…

Location may not matter much in the digital world of podcasting, where all listeners need is an app to download their programs, but Waco’s Rog…

Mazanec Construction workers prepare the building’s front for a decorative facade as work on the Art Center of Waco’s new home starts.

Workers level the front grounds of a former community daycare center for a sidewalk to the new downtown location of the Art Center of Waco.