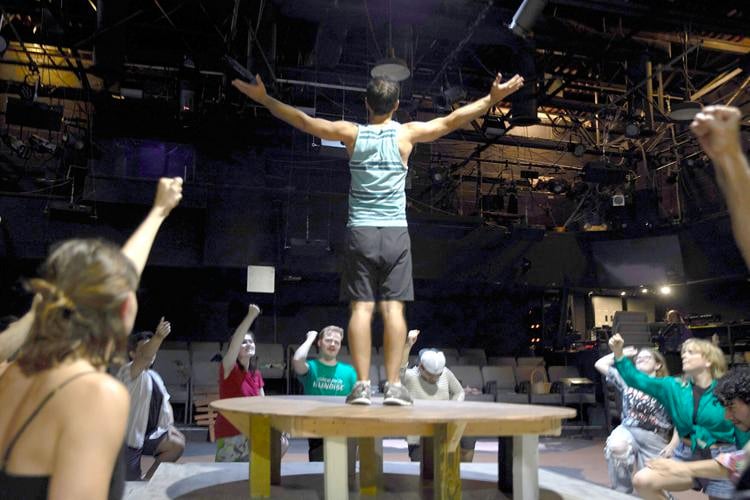 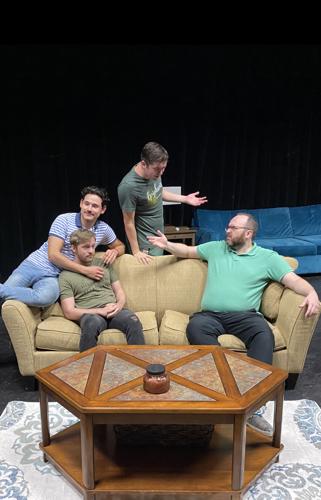 Two gay couples (Gregorio Sanchez, left, Caleb Clark, Trent Sutton and William Priest) find their relationships affected by abuse in Sutton's "The Way He Looks At You," which opens a four-performance run Thursday.

Plays by two young Waco theater companies eager to stretch themselves will celebrate joy in one case and examine gay relationships in another.

The former comes in Silent House Theatre Company’s production of “Godspell,” the first musical for the company and one staged in the round at the Waco Civic Theatre.

The second is Wild Imaginings’ workshop production of Trent Sutton’s original script “The Way He Looks at You,” which will offer post-performance talkback sessions with the audience.

Silent House co-founder Collin Selman said the choice of “Godspell,” Stephen Schwartz’s 1971 free, contemporary reworking of the story of Jesus and his disciples, was sentimental in part, referencing a past Waco Children’s Theatre production. “We did it when we were younger and we loved the show,” he said.

What drew company directors to the show was its joy and exuberance, a change of pace from Silent House’s previous presentations of drama and dark comedy. That’s not to say Silent House’s “Godspell” will only be “a bunch of fun, happening,” Selman said, but the work’s more serious moments won’t be downplayed, either.

The musical, with inspiration from the Gospel of Matthew, imagines Jesus as a parable-telling teacher with a band of free-spirited followers, all set to a pop-rock soundtrack.

A cast of 14 will perform the musical to recorded tracks — live accompaniment got “complicated” in the WCT space, the director said — with music direction by Melissa Lohr and choreography by Joe Taylor.

The production opens a five-performance run on Wednesday with the Aug. 25 performance signed by American Sign Language interpreters.

For Wild Imaginings’ “The Way He Looks at You,” the drama onstage is a starting point for company founder and playwright Trent Sutton. As a workshop production, the play is a work in progress awaiting audience reaction and feedback. Directed by Tredessa Thomas, his play focuses on two gay married couples (Sutton, Gregorio Sanchez, Caleb Clark, William Priest) as each couple struggles through issues of abuse, physical and emotional.

“Too often LGBTQ representation in plays centers on a particular aspect of gay life, such as coming out, or idealizes its gay characters. I wanted to talk about something more real and more raw,” he said. “I wanted to explore the ways abuse looks different than physical or sexual violence, but also emotional or mental or financial abuse.”

For one couple, the flash point in their relationship comes in a suspicion of infidelity; for another, it’s a workplace where toxic criticism is becoming corrosive. “People are people and relationships are relationships,” he said.

Sutton said the feedback from audience members after each performance will help shape the next draft of his script, which he hopes to enter in the scriptwriting festival circuit.

"The Way He Looks at You"

Tickets: $18 and $15, available online at wildimaginingswaco.com.

Waco audiences may leave these upcoming local musicals with something universal, namely spirits buoyed by romance, love and — turning to the French here — a joie de vivre.

Creative Waco hopes to steer Waco residents to online voting over the next 5 days for a chance to fund a live concert series at the Bridge Street Plaza amphitheater.

For artist Jack Bowers, what one sees in art depends in large part on the viewer's perspective: the location of the viewer to the artwork, the angle of the art and what the viewer might think about what she's seeing.

Constance Wu opens up about sexual assault early in her career

Constance Wu opens up about sexual assault early in her career

Two gay couples (Gregorio Sanchez, left, Caleb Clark, Trent Sutton and William Priest) find their relationships affected by abuse in Sutton's "The Way He Looks At You," which opens a four-performance run Thursday.