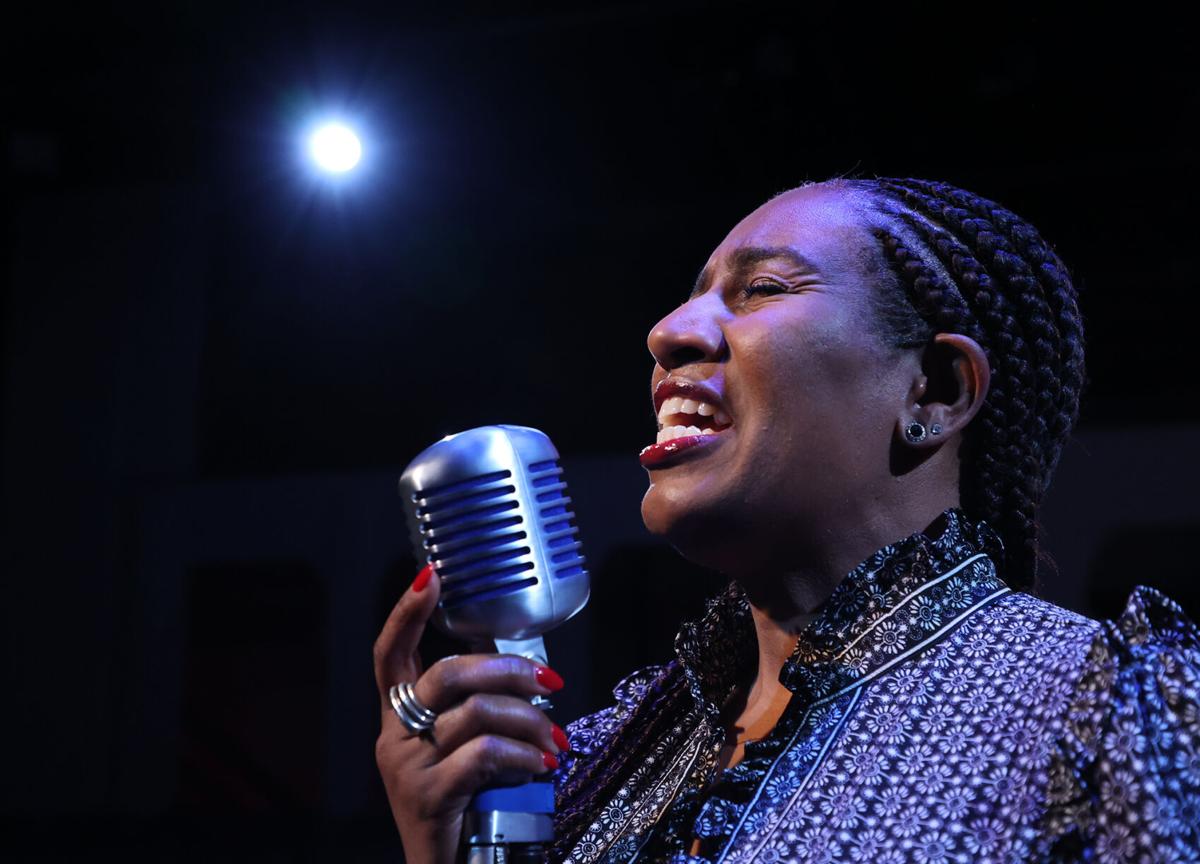 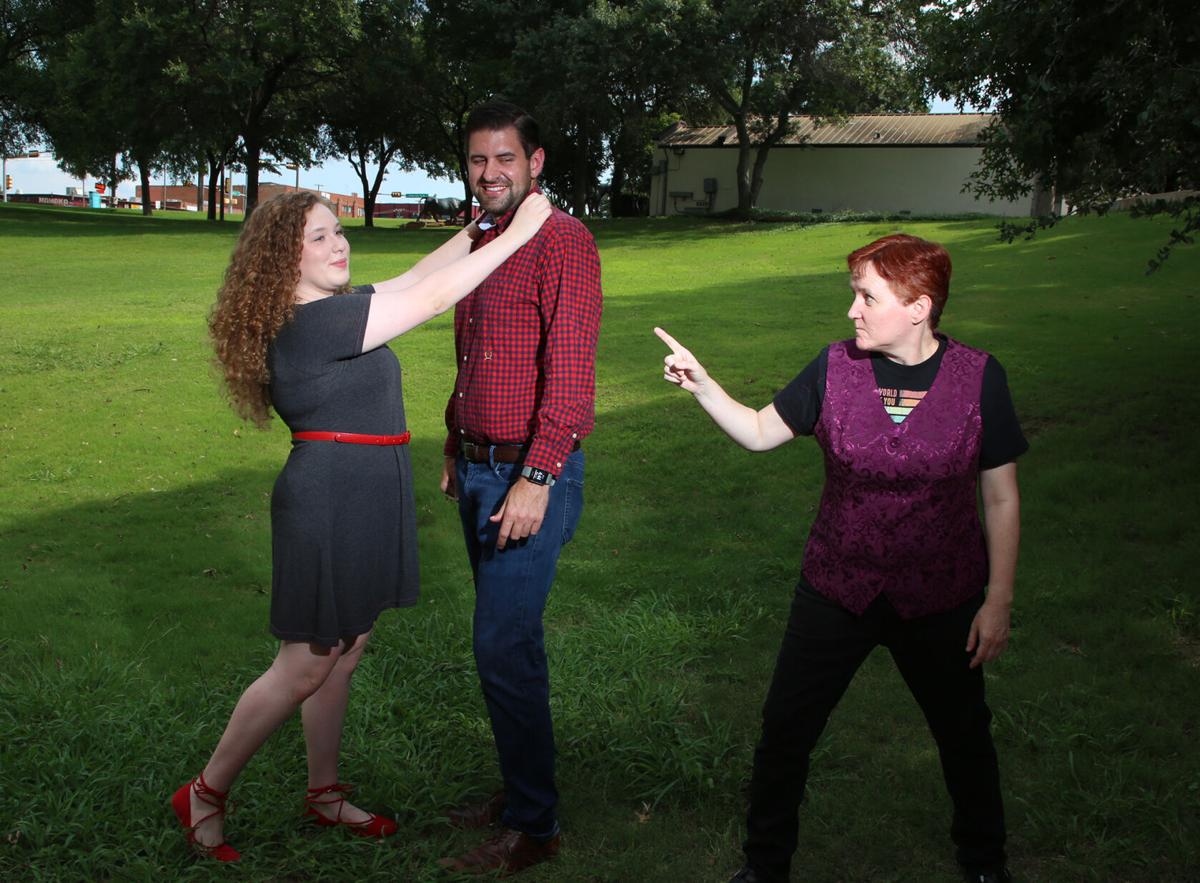 Rosalind and Orlando (Mackenzie Nelson and Hunter Edmundson) find romance in the forest where Duke Senior (Karen Savage) has been banished in the Shakespeare comedy “As You Like It,” staged this weekend at Indian Spring Park.

Waco theaters will let the work and their actors do the talking this weekend, but it’s almost like Welcome Back Weekend with four productions on the stage and one online following a different and distanced 2020.

Not only are in-person audiences back for four of the productions, but there’s variety in the offerings as well: a one-woman musical, Shakespeare in the (Indian Spring) Park, a streaming one-man drama and a new company debuting with a Tennessee Williams classic.

Here’s what’s onstage this weekend. Some COVID-19 protocols such as audience masking, online ticketing and capacity limits are still in effect, so check with the venue before coming out to the performances.

Tyrha Lindsey-Warren, who plays and sings the part of jazz vocalist Billie Holiday in the Waco Civic Theatre production, is quick to say that she won’t be trying to replicate Holiday’s signature style. “I don’t sound like Billie Holiday. I can’t do that. I’m paying homage to her — and I will still sound good,” she said with a laugh.

The Lanie Robertson musical captures Holiday, an iconic jazz and pop singer from the 1930s to 1950s, in a 1959 show at the Philadelphia jazz club four months before her death. It’s largely a revue of Holiday’s best-known songs with some dialogue in between.

The actress and singer saw the original musical during its 2014 run with Audra McDonald, who won a Tony Award for her performance.

Although many in Waco know Lindsey-Warren as a Baylor marketing professor, founder of the Waco Family & Faith International Film Festival and an occasional jazz/pop singer, she’s got a considerable background in musical theater.

She was the first African American woman to graduate from Northwestern University’s music theater program, although she admits she also majored in television and film production to placate her father. She performed in the West Coast tour of the Broadway musical “Play On!,” starred in several musical productions in Los Angeles, Illinois and Ohio; toured with singers Kathy Wade and Valerie Simpson; opened for Grammy Award winning jazz musicians, Kirk Whalum, Roy Haynes and Pieces of a Dream; and toured Blue Note Jazz Clubs in Japan.

In this weekend’s Waco Civic Theatre production, she’s backed by two notable Waco jazz musicians, Dave Wild on piano and Chuck Jennings on bass, both of whom who have played behind Lindsey-Warren in past jazz gigs.

“As You Like It,” 7:30 p.m. Friday through Sunday, Indian Spring Park; free. Those attending may bring blankets or lawn chairs for seating.

COVID-19 considerations, however, limited the audience size and number of performances, so this weekend’s production of Shakespeare’s comedy “As You Like It” staged in Indian Spring Park comes closer to the Shakespeare in the Park that Sutton has had in mind for several years.

“I’m originally from Austin and free theater in the park was something I grew up with,” he said.

Sutton was one of the players in the series of Shakespeare scenes that the InSite Shakespeare Studio troupe performed at Brotherwell Brewing in 2019. Like those productions, “As You Like It” will emphasis the actors and dialogue more than sets or costuming. He’s staging “As You Like It,” one of his favorite Shakespearean comedy, in contemporary times. “I want to bring Shakespeare in our current experience,” he explained.

The new Waco Drama Troupe makes its debut this weekend with its production of the Tennessee Williams classic, staged in Mission Waco’s Jubilee Theatre and, apropos of its New Orleans setting, featuring live music.

Baylor University directing graduate Cassie Nordgren, a former dancer and New York resident, strongly identified with the subject of Baylor Theatre’s weekend production “Dancing Lessons.” The two-person play concerns a New York dancer (Rebecca Smith) who’s facing the possible loss of her career due to injury only to have an apartment neighbor (Joseph Tully) ask for a personal lesson to help him overcome anxiety caused by his own ailment.

"It's hard to say what I relate to more, as a dancer or as a New Yorker," she said. Nordgren lived 10 years in New York before moving to Waco last fall. During a pandemic shutdown last year that kept Nordgren and her roommate largely in their apartment, they found a neighbor concerned for their welfare had slipped the occasional $100 bill under their door to help out. Creating the play's set with her team made her miss the city, she added.

The two-person play, staged at Baylor’s Theatre 11 to audiences limited to 30 people, finds both characters learning more about life as they find common ground in helping each other. The play runs about 90 minutes with no intermission.

Actor Michael Chenevert’s performance as pioneering Black Congressman Adam Clayton Powell in the one-man show “An Adam Experiment” was presented in February as a collaboration with the Waco Family & Faith International Film Festival and the Waco Civic Theatre.

His livestreamed performances will be repeated online this weekend Friday through Sunday.

Matthew McConaughey weighs in on his future in politics

Matthew McConaughey weighs in on his future in politics

I first thought of this column about a month ago in a different context.

Those who go to see the latest show by Waco artist Russell Campbell might bring their phones and not just for selfies.

The gentle brogues may linger on the ear in Waco Civic Theatre’s production “Outside Mullingar,” but its matters of the heart are perfectly un…

Rosalind and Orlando (Mackenzie Nelson and Hunter Edmundson) find romance in the forest where Duke Senior (Karen Savage) has been banished in the Shakespeare comedy “As You Like It,” staged this weekend at Indian Spring Park.