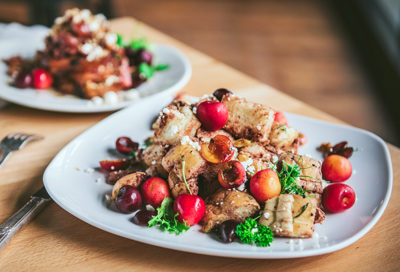 Over the past two decades, Figueroa has made a name for himself in the local food scene cooking at local resorts, wineries, cafés and restaurants. At every place he’s worked, Figueroa has brought the philosophy that a restaurant menu shouldn’t be some fixed document, but rather something that evolves and shifts constantly depending on what local farmers have in-season. And because Figueroa lives in the part of Michigan known affectionately as “The Cherry Capital of the World,” it goes without saying that he knows a thing or two about cooking with cherries.

“With the stone fruits, it’s such a ‘get it now’ situation,” Figueroa says of the local adoration for cherries. “I dove into cherries when I moved to this area, but I’ve been a stone-fruit lover my whole life. And that season is just so fleeting. It’s like you’re chasing it the whole year, and then there are two weeks where you're just rolling in it. And then, poof! It's gone.”

When Feast and Field connected with him, Figueroa was just in the midst of starting a new gig as the chef at a brand-new restaurant in Northport, Michigan, called Northport Pub & Grille. With its grand opening coinciding with the start of cherry season in northern Michigan, Figueroa was thinking a lot about cooking with cherries at the time, brainstorming a series of menu features that would put the spotlight on Michigan’s most iconic local fruit.

Everything you ever wanted to know about cherries

“When you're looking at using cherries in your food, you need to be thinking, ‘What does my food bring, and what do I want from the cherry?’” Figueroa explains of his thought process for designing a cherry-centric menu. For instance, he notes that sweet and tart cherries bring very different attributes to a dish. He likes using sweeter varieties with gamey meats like duck or goose, versus tart cherries that he prefers as a complement to spicier dishes — a spicy Asian slaw, perhaps.

Texture matters, too. Some cherries are soft, light and moist, while others are meatier and more substantial. If the cherries are the “main event” of a dish, that weightier texture might matter. For example, Figueroa prefers big, dark cherries with a firm, juicy texture for his cherry panzanella because a large part of the dish’s appeal is “actually biting into that cherry.”

For a cherry salad dressing, on the other hand, the rules of picking the right cherry for the job are different. “It’s all about the cherry flavor, because the cherry is just going to get buzzed into the dressing,” Figueroa explains. “So, I want the cherry flavor to be prominent, but the cherry doesn’t have to have any real meat to it.”

As for developing recipes that call for cherries when cherries aren’t in-season, Figueroa has a hack for that, too.

“You can take a dried tart cherry, when you’re talking out-of-season, and you can plump it by soaking it in a cherry vinegar or wine,” he says. “That cherry takes on all the acid of whatever you want to soak it in, and that’s a great way to plump it back up and rehydrate it.”

This panzanella recipe features sweet black cherries in place of the more typical tomatoes for a satisfying Midwest mashup.

With our weekly newsletter packed with the latest in everything food.

Feast and Field: Food Begins in the Field

Issue No. 22: Cherries in Northern Michigan

It’s a very cherry issue of Feast and Field: a northern Michigan farm leaning into agritourism, types of cherries, recipes (including cocktails!) and more.