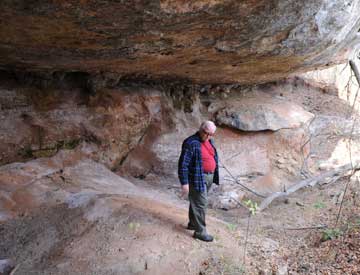 Bosque Museum director George Larson points out the ancient Horn Rock shelter. The DNA of a man and girl buried there more than 11,000 years ago are being studied in an effort to learn more about how the Americas were first populated. 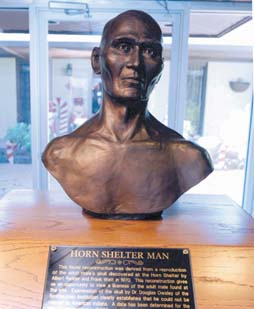 A facial reconstruction based on the man’s skull found at Horn Shelter shows a person that scientists said did not resemble modern American Indians. 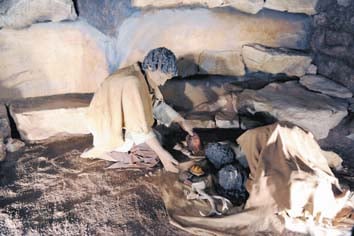 An exhibit at the Bosque Museum in Clifton depicts the burial of a man and girl in the Horn Shelter as it might have been 11,200 years ago.

Toward the end of the Ice Age, a man and child were laid to rest under a rock ledge on the Brazos River.

They were placed in the fetal position and lavished with goods for a happy afterlife: red ochre pigment, seashells, hunting tools and fossilized shark teeth, a hawk’s talon and a sewing needle. They were covered with turtle shells and limestone slabs.

The skeletons of Horn Shelter would lay there for 11 millenia, while mammoths and saber-toothed tigers went extinct, pyramids were built, writing was invented and civilizations rose and fell.

Their bones, discovered by a self-taught archaeologist four decades ago at the site 16 miles northwest of Waco and just inside Bosque County, are among the oldest known human remains in America.

Now researchers are hoping this ancient duo can help solve some mysteries about America’s first immigrants.

Scientists from the Smithsonian Institution and Baylor University have teamed up to study the genetic signatures of the Horn Shelter bones.

They are hoping the results will help determine their kinship with ancient and modern-day people groups, and provide new evidence about how the Americas were first populated.

Lori Baker, a forensic anthropologist at Baylor, is doing the genetic testing in partnership with Doug Owsley, an anthropologist at the Smithsonian’s National Museum of Natural History, which now has custody of the bones.

Baker has extracted and analyzed mitochondrial DNA (mtDNA) from both samples.

Mitochondrial DNA is passed on through the mother’s side only and is used to sort the world’s population into “haplogroups,” or people groups with common ancestry.

But Baker said her testing so far has only deepened the mystery of the origins of the Horn Rock people.

The handful of other ancient American remains whose mtDNA has been studied carry one of the five genetic markers that various Native American groups share. Not so with the Horn Shelter bones, according to numerous tests Baker has done so far.

“The results are different from what you’d expect from Native Americans,” she said. “I’m looking at the sequence and I’m not able to determine a haplogroup. . . . Usually, when I run the sequence, I get something very clear.”

Baker is planning to send the bone samples to another laboratory for retesting to see if her results can be replicated.

Until then, she’s careful not to draw too many conclusions from her data, wary of wading into the volatile debates about the relationship of Native Americans to ancient remains.

But the question of the Horn Rock people’s identity has already been raised: One study shows that their skulls are markedly different from those of modern American Indians.

Baker said that if her mtDNA findings are confirmed, it would suggest the ancestors of the Horn Rock people and the ancestors of modern Native Americans came to the New World at different times.

“It could be a paradigm shift if we can prove this,” she said.

Even without the new findings, the Horn Shelter is regarded as a national archaeological treasure, though its recognition has been slow in coming.

The Horn Shelter is among 13 sites nationwide where paleo-American remains have been unearthed. The remains are well-preserved, with genetic material still intact, and they have been dated at an unusually early age of 11,200 years ago. The lavish funeral goods give an insight into the minds of a long-vanished people.

“We take that to mean they believed in some kind of afterlife,” said Clark Wernecke, director of the Gault School, which oversees the excavation of a major prehistoric quarry site in nearby Bell County. “They were buried with care, with grave goods. That means the family was going through a grieving process and showing respect.”

In the past decade, the Smithsonian Institution has taken custody of the bones and helped create a major exhibit about the site at the Bosque Museum in Clifton in 2006.

George Larson, museum director, shows visitors replicas of the skulls and bones, a bust of how the man might have looked, a large diorama of the burial process and a whole room full of grave goods. The child, probably a girl of about 11, was buried with an eyed sewing needle made of bone and various decorations.

The man, some 40 years old and thought to be a revered leader, was propped on turtle shells and decorated with coyote teeth pendants, badger claws, antler tools and shell beads from the Gulf of Mexico, then some 500 miles away. Each body was covered with 19 limestone slabs, creating a turtle-like hump.

“This is really the crown jewel,” he said. “Here you can find the life and culture of a people no longer in existence.”

The bones and treasures remained obscure for years after a young Waco man named Al Redder discovered and exhumed them in 1970.

Redder first encountered the Horn Shelter years before that, while attending an Independence Day picnic on the shores of the Brazos River. He saw an overhanging cliff across the river and swam over to take a look. Redder was already interested in archaeology and saw the site’s potential.

“Usually most overhangs contain some kind of occupation,” he said.

In 1967, he returned with the landowner’s permission to began excavating, with the help of avocational archaeologists Frank Watt and Robert Forrester. With trowels, brushes and grids, they dug and sifted through millennias’ worth of silt and debris from Indian camps. Three years later and 11 feet down, they found the bones.

Redder was working for General Tire at the time. He got a three-day weekend and spent it with his partners exhuming the bones so looters couldn’t get to them.

Redder placed the bones in his home laboratory for safe keeping.

“A few prominent archaeologists knew about it, but we didn’t broadcast this all over the country,” he said.

Redder continued his weekend digging work for 20 years, finding 60boxes worth of artifacts. He first described his work in 1985, in the journal of the Central Texas Archaeological Society, which had a tiny readership.

“There’s a bit of snobbery in any profession,” he said, adding that Redder’s crew did a meticulous job at Horn Shelter.

Richard Jantz, a University of Tennessee anthropologist, has studied the Horn Shelter bones with Owsley of the Smithsonian Institution. He said he’s not surprised the discovery would have been overlooked in the 1970s.

The prevailing wisdom at the time was that the ancestors of Native Americans crossed the Bering land bridge into Alaska as the ice sheets retreated about 11,000 years ago, and that they all came in the same migration.

“The mindset was that the early Americans were no different from moderns, and that there was nothing that interesting about them,” Jantz said.

New discoveries, he said, including a possible 14,000-year-old settlement in Chile, have begun to undermine the simple one-migration theory that reigned for decades.

Now some scientists, including Owsley and Jantz, believe multiple migrations, perhaps by coastal seafarers, could have preceded the migration across the now-deluged Bering land bridge.

“The major area of controversy in the skeletons of early Americans is whether these early people gave rise to later ones, or whether they were replaced by subsequent migrations,” Jantz said.

At stake in this question is whether scientists can continue to analyze early American bones. In several cases, American Indian groups have used federal law to claim ancient skeletons as ancestors and to reinter them, preventing further study.

Jantz, an expert in skull shapes, said the bones at Horn Shelter and several other paleo-American sites show little resemblance to modern American Indians, who tend to have round, Asiatic faces.

“The skulls tend to be somewhat longer, narrower and higher than modern Native Americans,” he said. “They really don’t resemble any modern group very much.”

Jantz said the skulls most closely resemble those of Polynesians or the Ainu people of ancient Japan and Manchuria.

Jantz said the mtDNA work should shed more light on the question of ancient American origins, but it’s important not to draw too many conclusions from a couple of skeletons.

“America is enormously complicated in terms of colonization history,” he said. “It has to be the case that some groups became extinct.”

Baker, the Baylor scientist, said it’s possible Horn Shelter people were contemporaries of ancestors of Native Americans, though she said she’s not trying to prove anything.

“We’re trying to answer a very broad question with a small set of samples,” she said. “They could be a group that were replaced by subsequent migration.”

Larson, the Bosque Museum director, said the new research is exciting and may be the catalyst for more archaeological digs in the area around Horn Shelter.

Redder said he’s through excavating there, but he hopes the new genetic research will shed more light on the peopling of the Americas.

“It’s nice to see your hobby turn into something worthwhile,” he said.

Smithsonian sheds light on shaman and girl buried on the Brazos 11,100 years ago

The oldest known man in Central Texas and a girl buried next to him about 11,100 years ago at the Horn Shelter site on the Brazos River are getting new attention as researchers at the Smithsonian Institution analyze their bones and grave goods, and Harvard scientists study their DNA.

Bosque Museum director George Larson points out the ancient Horn Rock shelter. The DNA of a man and girl buried there more than 11,000 years ago are being studied in an effort to learn more about how the Americas were first populated.

A facial reconstruction based on the man’s skull found at Horn Shelter shows a person that scientists said did not resemble modern American Indians.

An exhibit at the Bosque Museum in Clifton depicts the burial of a man and girl in the Horn Shelter as it might have been 11,200 years ago.