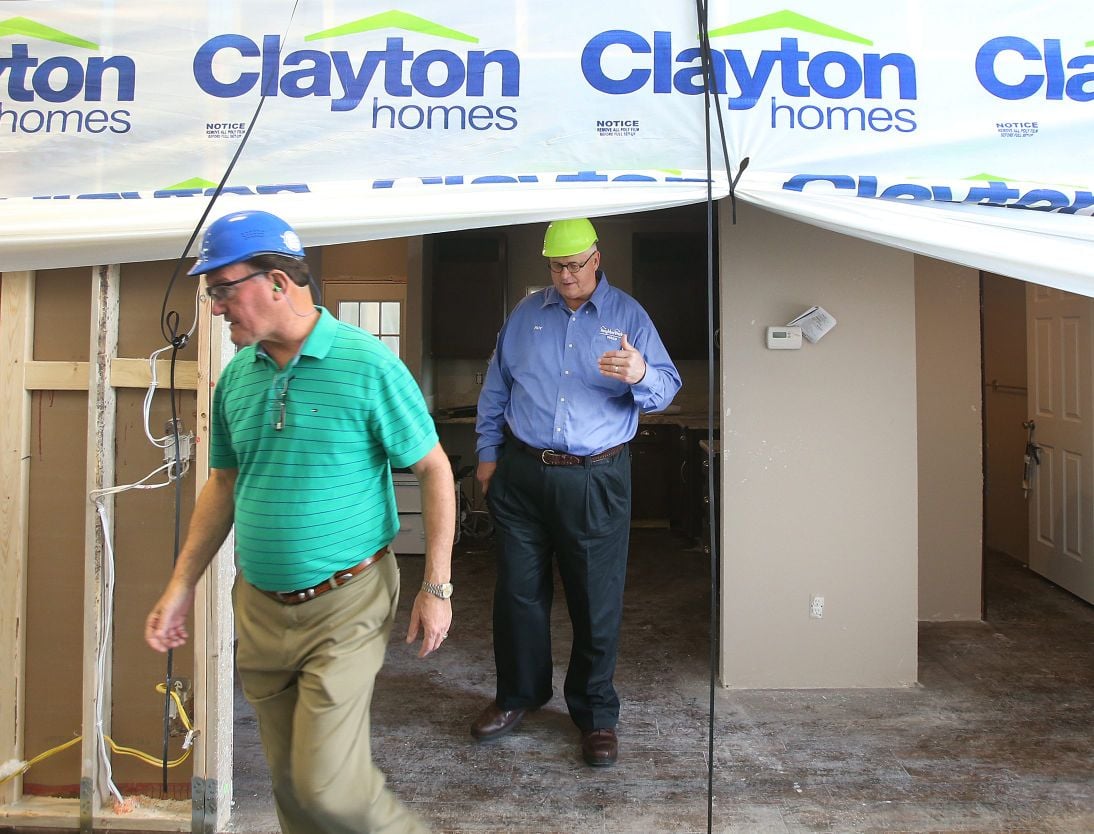 Mark Geisert, left, with Clayton Homes, takes Roy Nash with NeighborWorks Waco on a tour of a duplex being assembled. 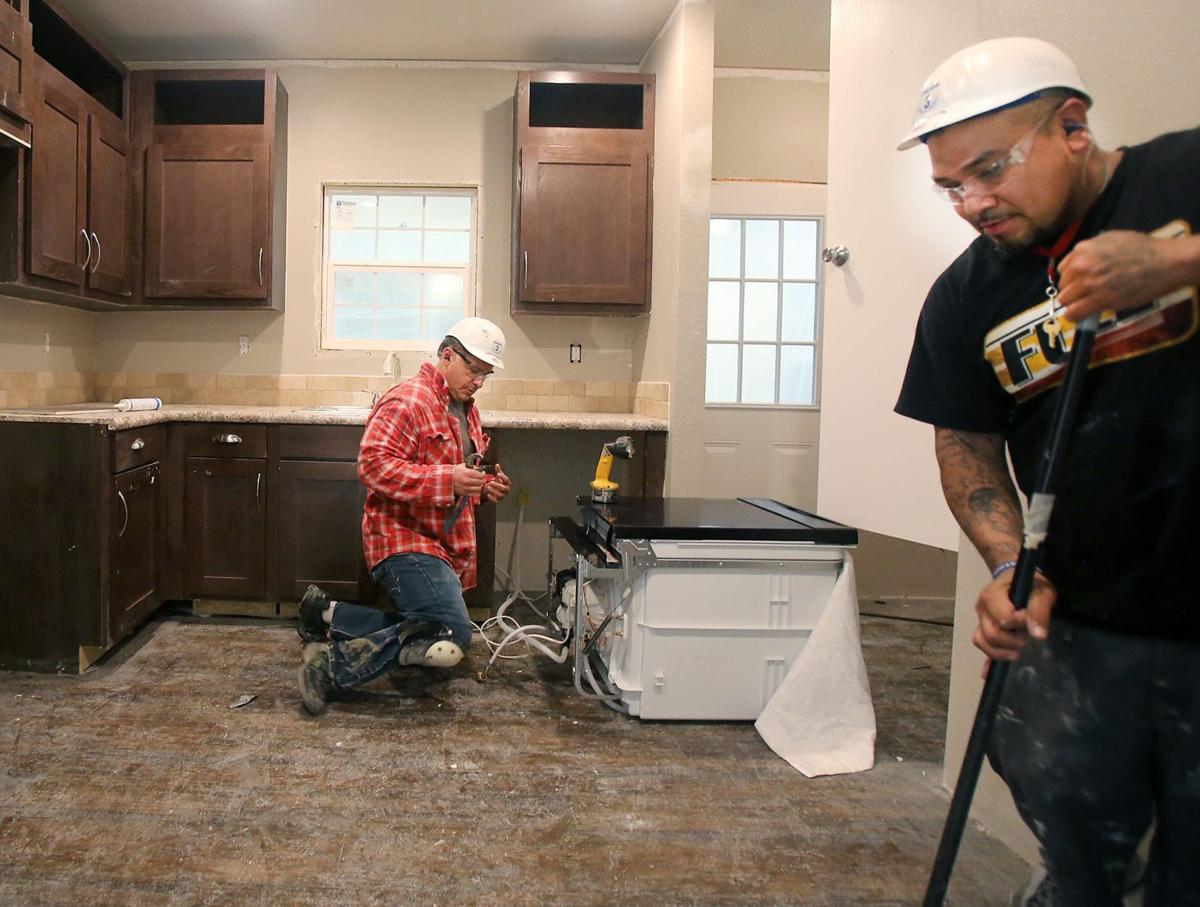 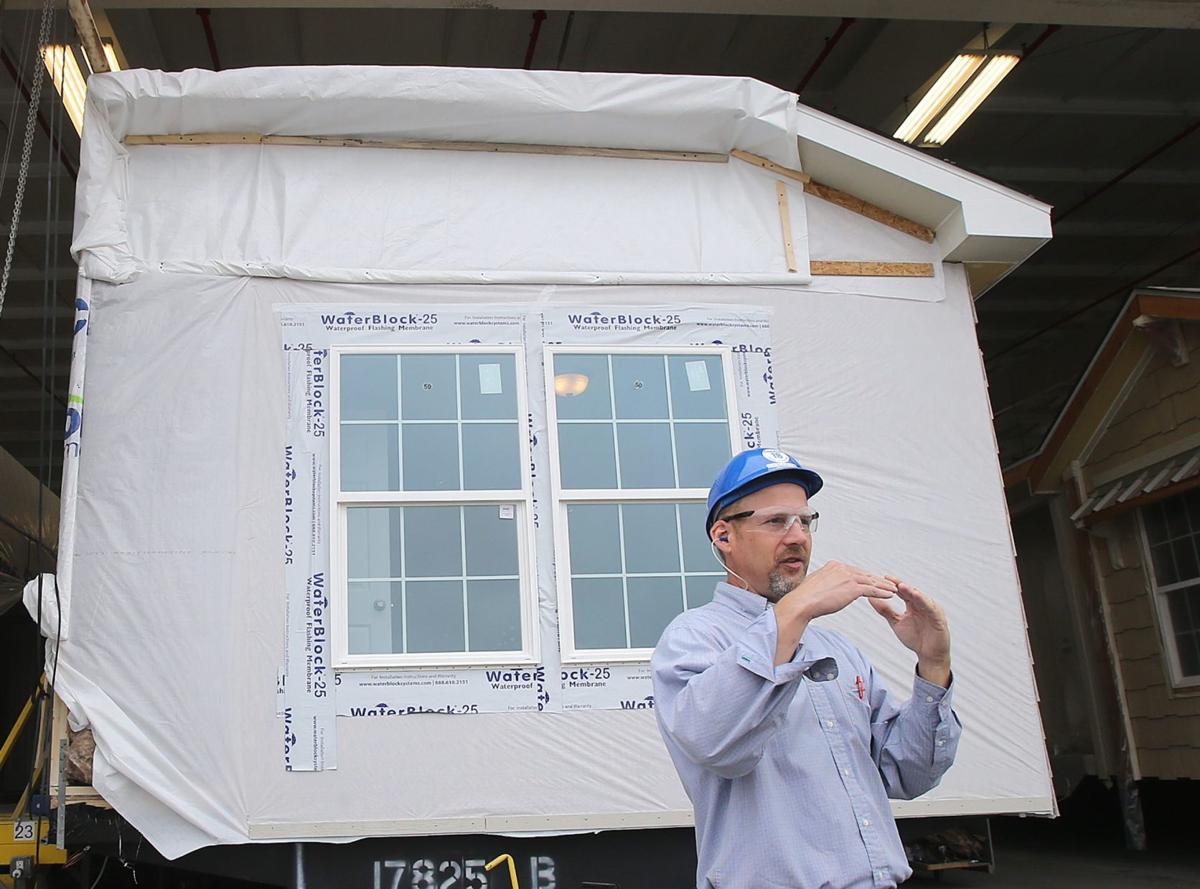 Steve Fulton with Clayton Homes on Imperial Drive speaks in front of one-half of the duplex being assembled for NeighborWorks Waco. 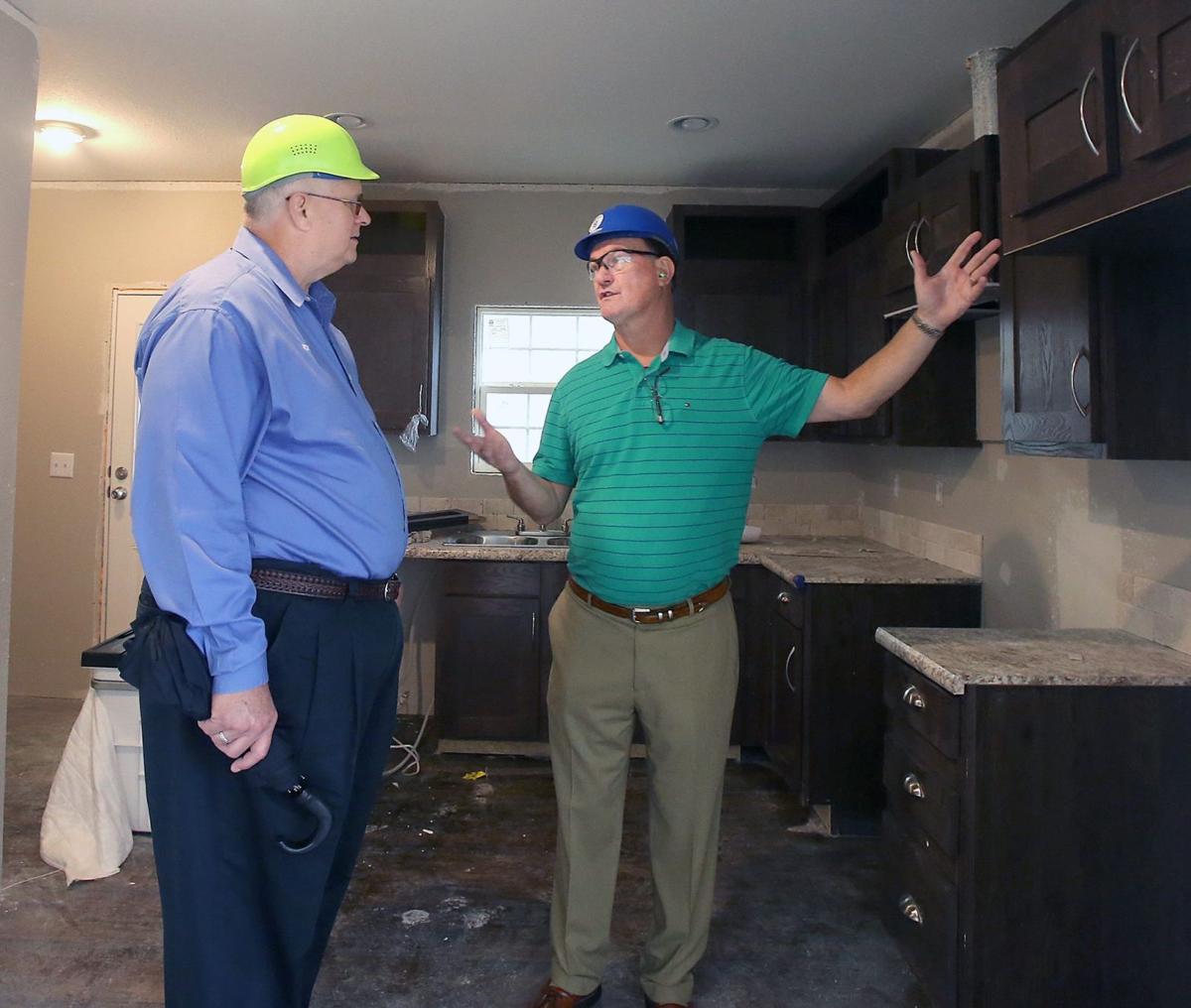 Mark Geisert, right, with Clayton Homes takes NeighborWorks Waco’s Roy Nash on a tour of the duplex being assembled.

A Clayton Homes plant on Imperial Drive will build a duplex to be assembled at North 19th Street and Mitchell Avenue, on a lot owned by NeighborWorks Waco, as part of a joint effort to create affordable housing in Greater Waco and beyond, the organizations announced Monday.

Each of the two 1,100-square-foot homes in the duplex will feature three bedrooms, two baths and appliances, and will lease for about $900 a month, officials said during a news conference at the Clayton Waco 2 facility, 7001 Imperial Drive, where the media and visitors received a plant tour and a peek at the duplex under construction.

Roy Nash, president and CEO of NeighborWorks Waco, which gets involved in building, financing and acquiring sites for conventional homes, said he hopes this is the first of several modular duplexes Clayton will prepare as part of a new program with his agency and a national organization called Next Step.

Nash and Mark Geisert, a sales manager for Clayton Homes in Waco, said crews should have the duplex ready for assembly by the first week of June, after which there will be an open house to introduce it to the public. NeighborWorks will publicize the availability of the duplex and should have two lessees in a matter of days, Nash said.

The goal of the collaboration is to give low- to middle-income families more options in finding affordable homes, and to occupy vacant lots near Waco’s inner city. Nash said the duplex will fill a spot where crews demolished a run-down fourplex that had become the scene of drug use and possibly drug dealing.

Steve Brady, with Clayton Homes, said the Tennessee-based company jumped at the chance to join forces with NeighborWorks and Next Step on this venture because Kevin Clayton, president, CEO and son of the founder, has a long-standing relationship with Next Step and an affinity for its mission.

Chris Nicely, CEO of Next Step, said the nonprofit group is serving as a liaison between Clayton and NeighborWorks in Waco.

“We see this effort as one that will produce high-quality and energy-efficient housing for those who need it most,” Nicely said.

Next Step, based in Kentucky, is striving to build a network of builders to replace 2 million energy- inefficient homes built prior to U.S. Housing and Urban Development regulations relating to energy savings, and to find groups such as NeighborWorks that can help provide or secure low-interest financing.

Nash noted that the families chosen to lease space in the new duplex may later choose to own their portion of it.

Nash, whose family for years sold building supplies under the Nash-Robinson name, said he did not have to be sold on the value of modular housing.

“We built trusses and wall panels that could form the shell of a home, and a four-man crew in one day could put it in place on an existing slab, install felt and decking for the roof and get it dried in for plumbing and electrical work,” Nash said.

The process didn’t go over well in Waco because subcontractors lost work, he said.

But the popularity of building the components of a home in a controlled setting has grown as quality and energy efficiency have improved.

In a prepared statement, Stacey Epperson, president of Next Step, said, “We believe factory-built homes are the answer to America’s growing affordable housing crisis. The right-sized home at the right price allows NeighborWorks Waco and other nonprofits to serve more deserving families. We are happy to be a part of the solution.”

Richard Benvenutti, general manager of Clayton Homes of Waco, said the company operates two production facilities locally, both on Imperial Drive. They employ about 500 people between them, with another 50 people serving as independent contractors.

He said the two facilities make about 1,500 homes annually for sale by Clayton-approved retailers in Texas, New Mexico, Oklahoma, Colorado, Kansas, Arkansas and Louisiana, with Texas serving as the prime market.

Nash said NeighborWorks and Next Step will split a rebate from Clayton Homes valued at about $12,000 as partners in the project.

Sales manager Mark Geisert said Clayton will make more duplexes as demand dictates, adding the group hopes this is the first of many to come.

Nash said a Clayton retailer in Lacy Lakeview will customize the new duplex bound for North Waco by visiting the site and installing gabled front porches for each home.

“We will officially own the duplex,” he said. “Clayton crews will marry up the two duplex sides and add touches to make it look like a site-built home. Then we will have the closing, and they will turn the keys over to us. We then will hold an open house and let people get acquainted with a quality modular home.”

Nash said marketing a duplex is a departure from the norm for NeighborWorks, which owns and leases out 85 site-built homes.

“Five to seven tenants per year move into home- ownership,” he said. “They are allowed to break their leases and can buy the home they occupy or another.”

NeighborWorks frequently secures sites by buying homes that have been foreclosed upon for delinquent taxes.

“We can get good deals from the city of Waco,” Nash said. “But these homes aren’t just available to us. Anyone can buy them.”

But Nash said placing homes on the site would have been cost-prohibitive, considering NeighborWorks would have had to build a water-detention pond to serve a drainage channel that crosses the area, and would have had to rebuild several small streets to serve the subdivision.

Instead, it sold the land to a group wanting to create a baseball/softball/soccer complex. The site was appraised at $200,000, but Nash declined to say how much NeighborWorks received in the deal. It will use the money to continue its work of building and financing homes and offering homebuying lessons to the public.

Nonprofit homebuilders in Waco struggle to rebuild momentum after recession

It took six long years digging out of payday loan debt, straightening out an immigration mess and living with a toddler in a one-bedroom apart…

A local nonprofit group is writing a new chapter for the site of the demolished R.L. Smith Elementary School.

The Clayton Homes plant at 6800 Imperial Drive has won the 2010 President's Cup award as the best overall plant in the Clayton system.

One impeachment manager could not vote to impeach

One impeachment manager could not vote to impeach

Mark Geisert, left, with Clayton Homes, takes Roy Nash with NeighborWorks Waco on a tour of a duplex being assembled.

Steve Fulton with Clayton Homes on Imperial Drive speaks in front of one-half of the duplex being assembled for NeighborWorks Waco.

Mark Geisert, right, with Clayton Homes takes NeighborWorks Waco’s Roy Nash on a tour of the duplex being assembled.