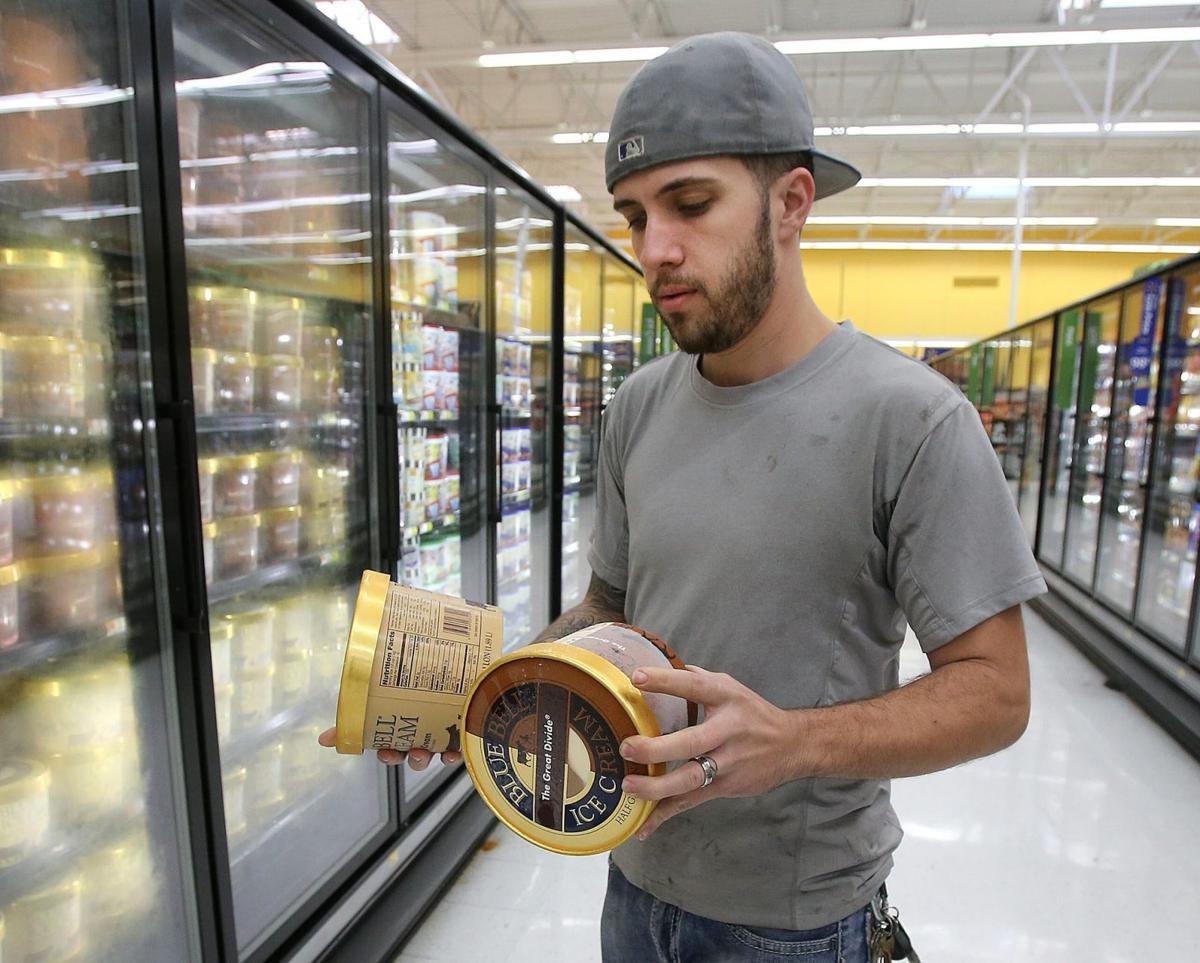 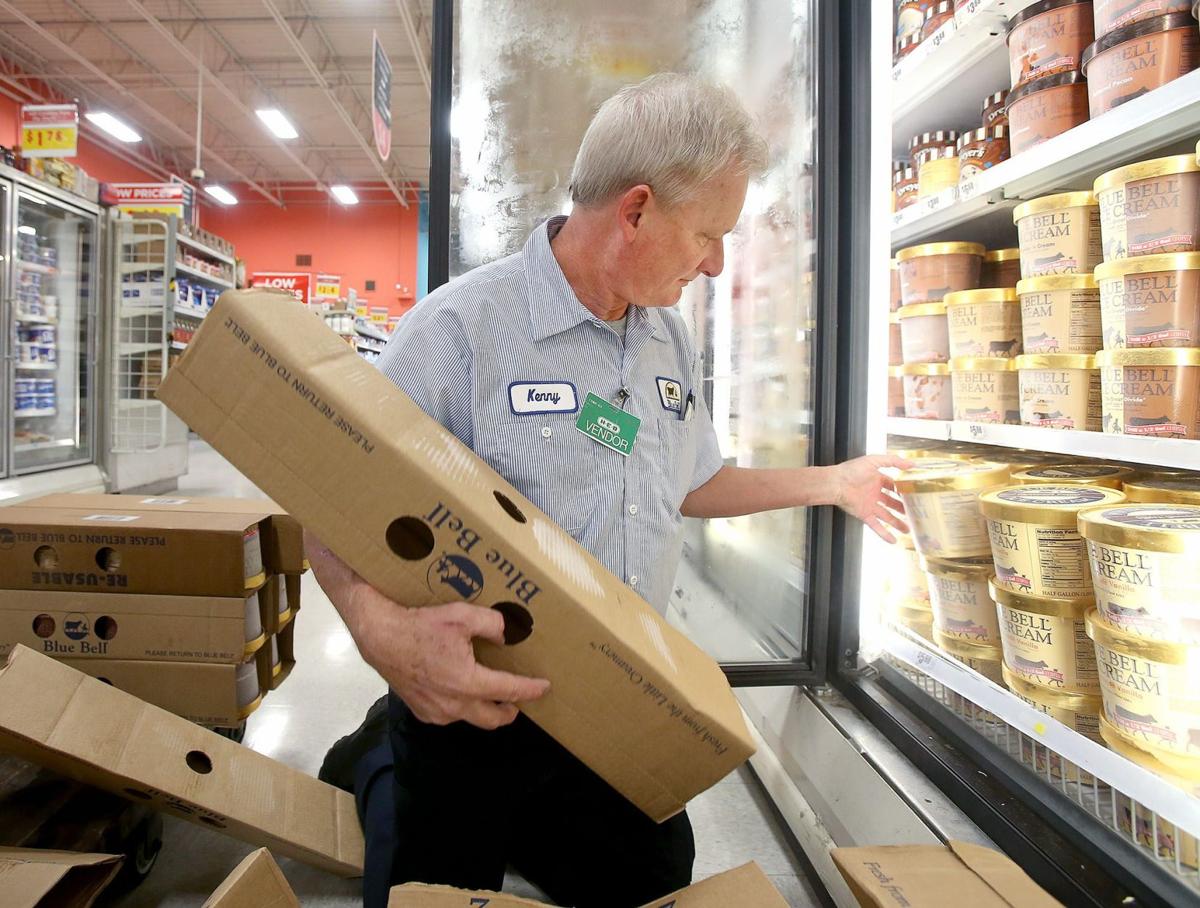 Several locations experienced a steady stream of customers ready to pack their carts with as many half-gallons as possible as Blue Bell ice cream returned to Waco-area stores Monday.

Most of those buying the limited flavors available said they had no concerns about consuming Blue Bell ice cream, which the Brenham-based company recalled in April after it was linked to a listeria outbreak that hospitalized 10 people in several states and contributed to the deaths of three people in Kansas.

The company has spent months cleaning and sanitizing plants in Alabama, Oklahoma and Texas and implementing new product safety standards.

The arrival of Blue Bell products in Oklahoma and in North and Central Texas represents the second phase of Blue Bell’s effort to return to normal distribution.

“Oh, my gosh, my whole household has been anxiously awaiting the return of Blue Bell,” said Bridgett Lewis, 37, who bought half-gallons of Dutch Chocolate, Cookies N’ Cream and Homemade Vanilla during a visit about 8:30 a.m. Monday to the H-E-B on South Valley Mills Drive.

“I think we’re going to have an ice cream party tonight,” added Lewis, smiling at her 3-year-old niece, Ryle Hall, who was sitting in her shopping basket.

Lewis said she would have no second thoughts about enjoying a bowl of Blue Bell, saying, “I think they’ve gone above and beyond to make this situation right.”

H-E-B posted a sign on the front of its dairy section, expressing its excitement over the return of Blue Bell merchandise.

“We want as many customers as possible to enjoy it,” the note said. “So we are limiting purchases to four per customer on half-gallons, cups and pints until supplies from Blue Bell have been stabilized.”

Shane Davis, 35, of Robinson, said he made a special trip to the H-E-B in South Waco to satisfy a long-awaited Blue Bell fix.

“I’ve tried three or four different brands, but nothing tastes as good,” he said. “Besides, I want to support the ‘local’ folks.”

Blue Bell has become a Texas tradition, having been founded in Brenham in 1907. Its battle with listeria created the need for the first recall in the 108-year history of the company, whose product in 2014 was the best-selling ice cream brand in the United States, according to Statista, which tracks market data.

Holly Kuehl, 26, used her cellphone to call family members and inquire about the flavors of Blue Bell she should buy at the South Waco H-E-B.

Kuehl said she knew the ice cream was returning to her favorite store Monday through media reports.

In the absence of her favorite brand, Kuehl said she had been buying H-E-B’s Creamy Creations ice cream.

“Sometimes the price of Blue Bell sends me in that direction, anyway,” Kuehl said with a laugh, but added that cost would prove no factor Monday.

That particular H-E-B was selling the more upscale Blue Bell brands, with nuts for $6.68 a half-gallon, while others such as Homemade Vanilla were marked at $5.98 a half-gallon.

At the Wal-Mart at Franklin Avenue and New Road, Victoria Koehler, 20, bought a pint of Buttered Pecan and a pint of Cookies N’ Cream.

“Yes, I made a special trip,” she said, while supervising her children, 2-year-old Aiden and 7-month-old Amiyah.

“I’m pregnant, and Blue Bell is what I’ve been craving. I’ve tried other brands. Breyer’s, for one, but they just don’t cut it,” she said.

At the Target Greatland store on Bosque Boulevard, Nicole Schwartinsky intently studied the freezer section filled with Blue Bell as of Monday morning.

“Am I buying Blue Bell today? Oh, absolutely,” she said. “I was just about to give up on them.”

She said she satisfied her sweeth tooth during Blue Bell’s absence by splurging on Blizzards from Dairy Queen.

Like others, she said she thinks the company has corrected its problems, and she will not hesitate to dig into a bowl of Great Divide.

“They have been so good for so long,” she said. “I won’t have any problem enjoying what’s on the shelves now.”

While it continues to work through the logistics of producing and distributing product in a five-phase process, it will deliver only to 15 states, though before the recall it had a presence in 23 states. It has announced it hopes to pick up the remaining eight states when it can properly do so.

Currently, Blue Bell ice cream is being made in Broken Arrow, Oklahoma, and in Sylacauga, Alabama.

“We continue to make good progress and expect to begin production at our main plant in Brenham in the next few months,” Ricky Dickson, vice president of sales and marketing, said in a prepared statement. “We do not have a date for any other phases at this time. As soon as we know that we can properly service the customers in an area with an adequate supply of Blue Bell ice cream, we will move to the next phase.”

“Purchases have been steady,” said manager Scott Halvorson, who said he received his ice cream deliveries about 10 a.m.

As of Monday, the Blue Bell distribution center in Robinson was back in business, with 53 employees returning from a paid furlough.

A long forensic mystery solved? Dating fingerprint may no longer be a problem

This video could show a tornado on the sun

This video could show a tornado on the sun

Florida-based AutoNation, the largest retailer of automobiles in the nation, confirms that it has signed an agreement to acquire the Waco-base…

HOUSTON — Blue Bell Creameries sought to reassure customers Monday that its ice cream in safe, even as the Texas company tries to determine wh…