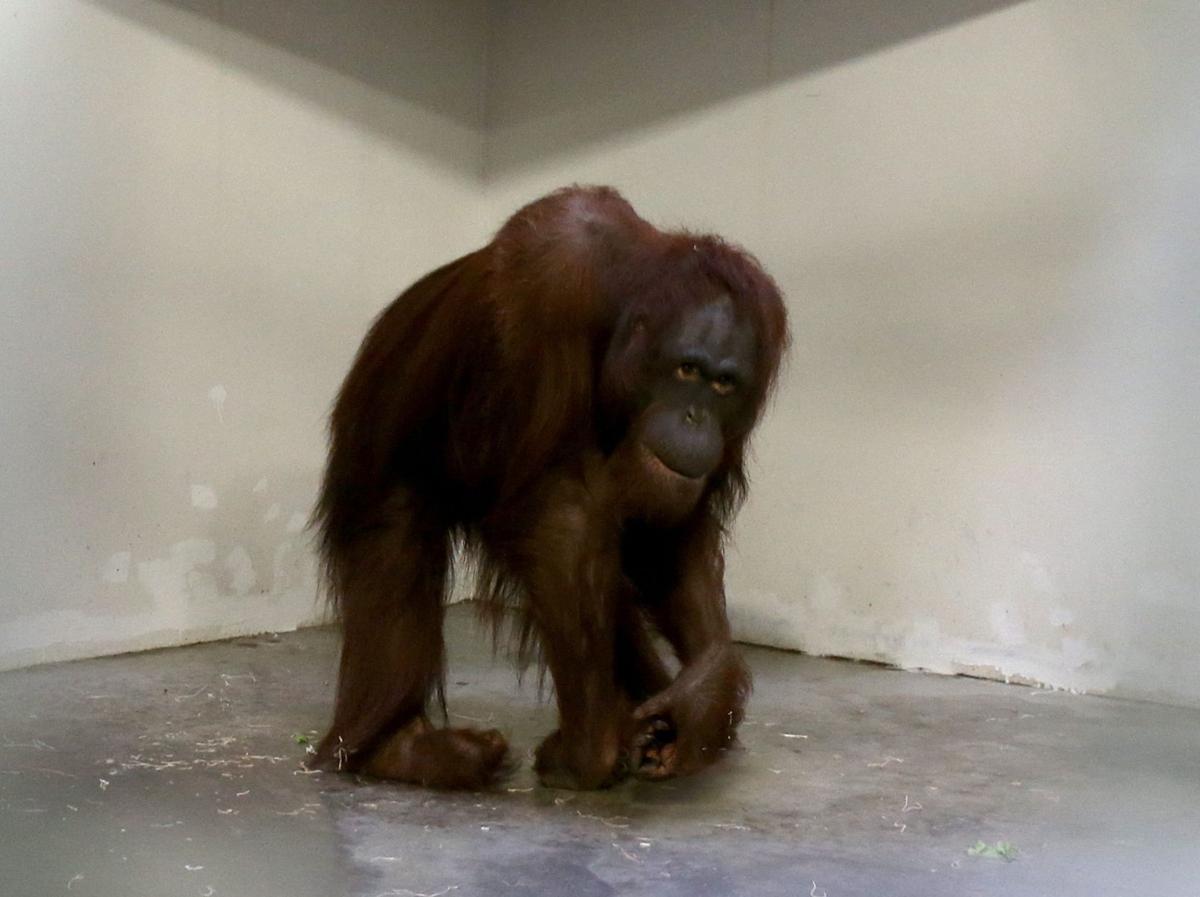 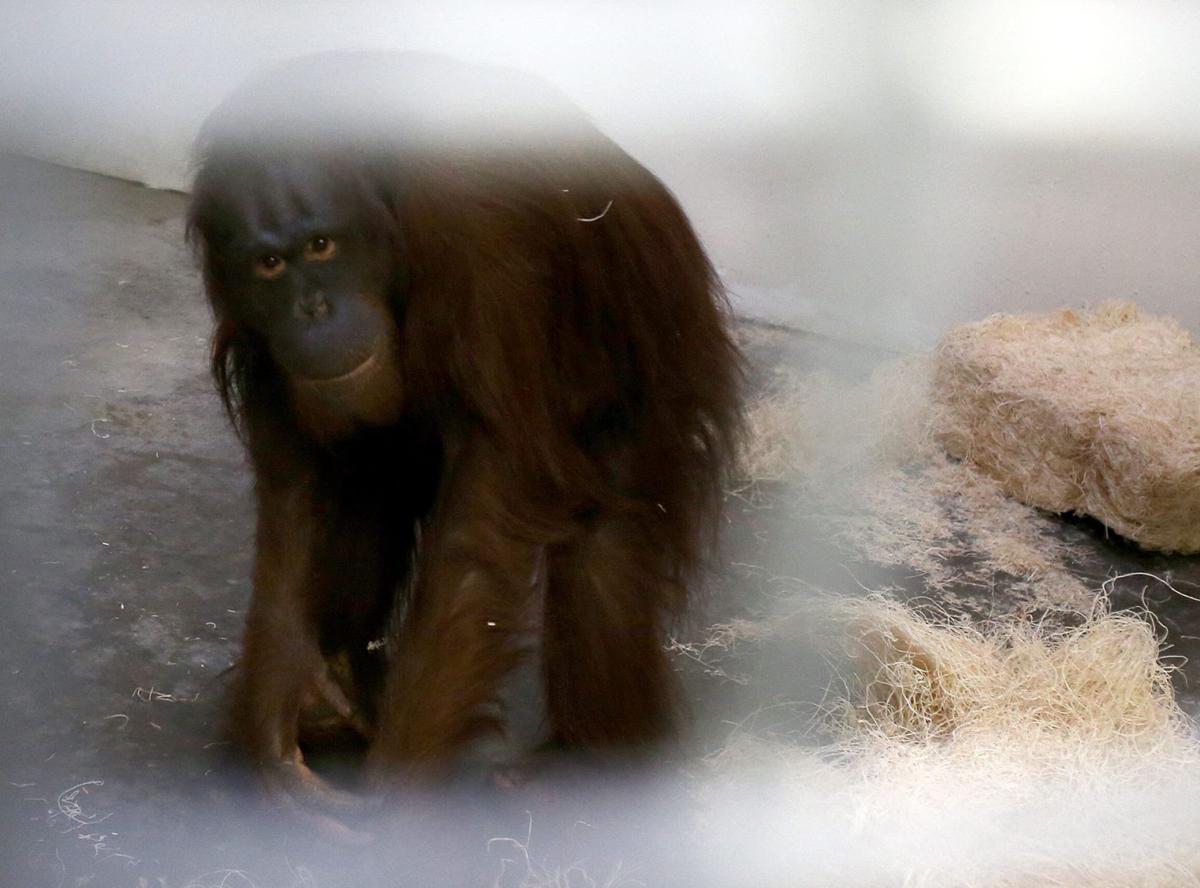 Mei and KJ are expecting and the Cameron Park Zoo staff is throwing the beloved couple a baby orangutan shower. It has also set up a gift registry, requesting the movie Zootopia, a Dolly Parton CD, and Spongebob Squarepants bubble bath.

Some of the items on the registry such as a Circo Musical Crib Mobile seem suited for a new arrival. Others, like a Baby Einstein Discover & Play Piano, might not seem suitable for an orangutan. But, each item on the list was individually selected to help provide enrichment activities for the new arrival and other zoo animals, said Terri Cox, curator of exhibits and programs.

“When Mei first got here, she was young, 10 years, she loved the movie ‘Jungle Book,’ ” Cox said, adding with a laugh that the staff quickly grew tired of the movie. “That was the one thing that would bring her up to the front until she got used to her surroundings.”

Mei is due in late January.

Mei’s primary trainer, Emily Ellison, said despite weekly ultrasounds, the medical teams have reported the sex of the baby is unclear. The baby’s gender won’t be revealed until birth.

Enrichment activities include more than providing animals with toys or sticking them in front of a television. Enrichment items are tracked and rated per animal to determine successfulness in stimulating the animal mentally and physically, Cox said.

More popularly known activities are the paintings created by the animals capable of manipulating a brush, including the otters, elephants, giraffes, the porcupine and the orangutans. Those paintings are sold to buy more materials.

While the CD “The Very Best of Simon & Garfunkel” is included on the registry, any CD works, she said. Some of the animals don’t like music that is loud, she said, but they all seem to have different tastes.

Even CDs and DVDs that no longer work can be donated for the zookeepers to create mobiles for different animals.

“They are really great light catchers,” Cox said. “We use those for smaller primates. It’s fun for the animals to look at.”

“It’s quite expensive to run a zoo of the caliber of ours,” Cox said. “We always need more money for enrichment items — not food, that’s in our budget always. But for extras like that, we have a small budget but not nearly enough to do all the things we need to do.”

The baby shower allows the community to be a part of the big event.

At 11:30 a.m. on Dec. 18 near the orangutan exhibit, Mei and KJ will open their gifts and human guests can partake in cake.

Several items on the registry at Target.com/gift-registry have been purchased, and all are priced under $25. The list includes stuffed animals, books, crayons, bubble machines, and pool floats, among others.

Since orangutans build “nests” each night, sheets and towels are always great gifts, she said.

“KJ will come up and his lips and hands are all blue because he’s been playing with chalk for hours,” she said.

The registry is in part a guide, she said. The registry may include a 12-pack of crayons, but if someone wanted to purchase a six-pack that is still great, she said.

Mei had a ultrasound Wednesday and “everything looked wonderful,” Ellison said. Orangutans, who share 97 percent of DNA with people, receive similar prenatal care, she said.

“When we found out, we do a management plan so the curators, the vets, and animal care staff for primates sit down and we look at every single thing that we can possibly look at from that pregnancy . . . diet, supplementation during lactation, where is the optimum place for her to give birth,” she said.

Mei has a local — and backup — OBGYN and neonatal intensive care unit nurses on standby. Mei already has been trained to receive voluntary injections, in case a cesarean section is needed.

Ellison said keepers are working with KJ and Kutai as potential surrogates. Kutai, a Bornean orangutan, was moved to Waco from Ohio as a companion for Mukah, a hybrid Bornean and Sumatran male orangutan.

“Even if Mei is like, ‘I’ll take a break,’ we have those two options as alternatives for parenting, which will be fantastic,” she said.

Starting in the middle of January, staff will be on 24-hour baby watch, Ellison said.

Since Mei will give birth in the colder months, it may take a little longer before the public gets its first glance at the baby, Ellison said.

The adult orangutans don’t enter the exhibits unless it’s 41 degrees or higher, and staff will have to be more sensitive to the weather with a baby, she said.

The death of Mei’s first baby, Batari, was so sudden and hard on Mei, staff and community members, she said.

The baby Bornean orangutan died Dec. 4, 2014 due to spontaneous bleeding in her lungs from an unknown source, Ellison said. A pathologist continues to review the case working to identify preventative measures, she said.

The zoo’s goal with the orangutan species is to save their existence. Wild orangutans are critically endangered, Cox said.

“In 10 to 20 years wild orangutans could possibly not exist,” Cox said. “That’s why every birth matters so much.”

“These are such magnificent animals. To encourage people to develop a connection to them, that’s the role of zoos. In a perfect zoo we’d love for everything to live in their natural habitat but in order to save the species we have specific survival plans,” she said.

Cameron Park Zoo welcomed the newest member to its family with the birth of a baby boy orangutan at 12:28 p.m. Thursday, officials said in a p…

Cameron Park Zoo officials removed an almost 3-week-old orangutan from his mother’s care after the mother, Mei, started pulling the baby off h…