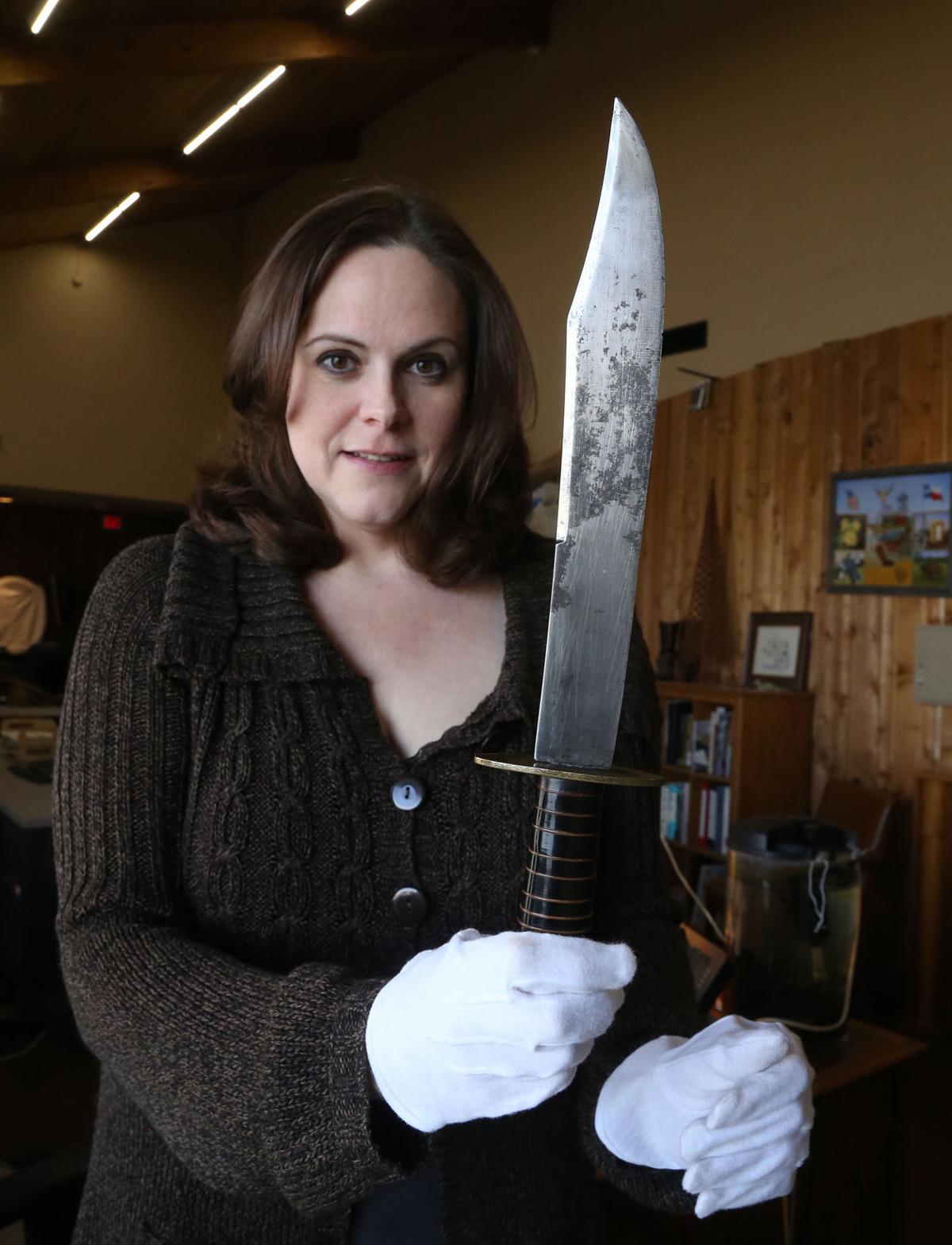 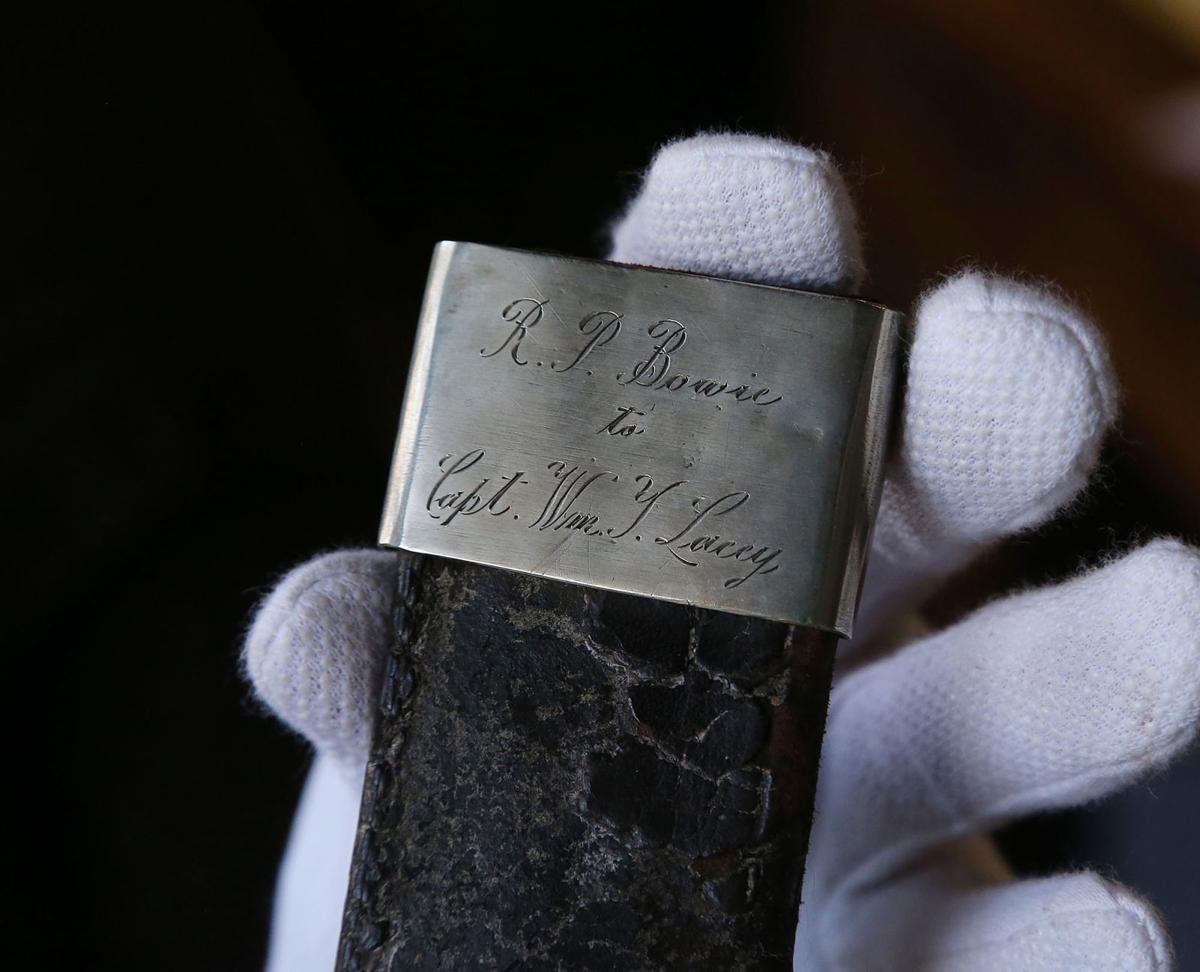 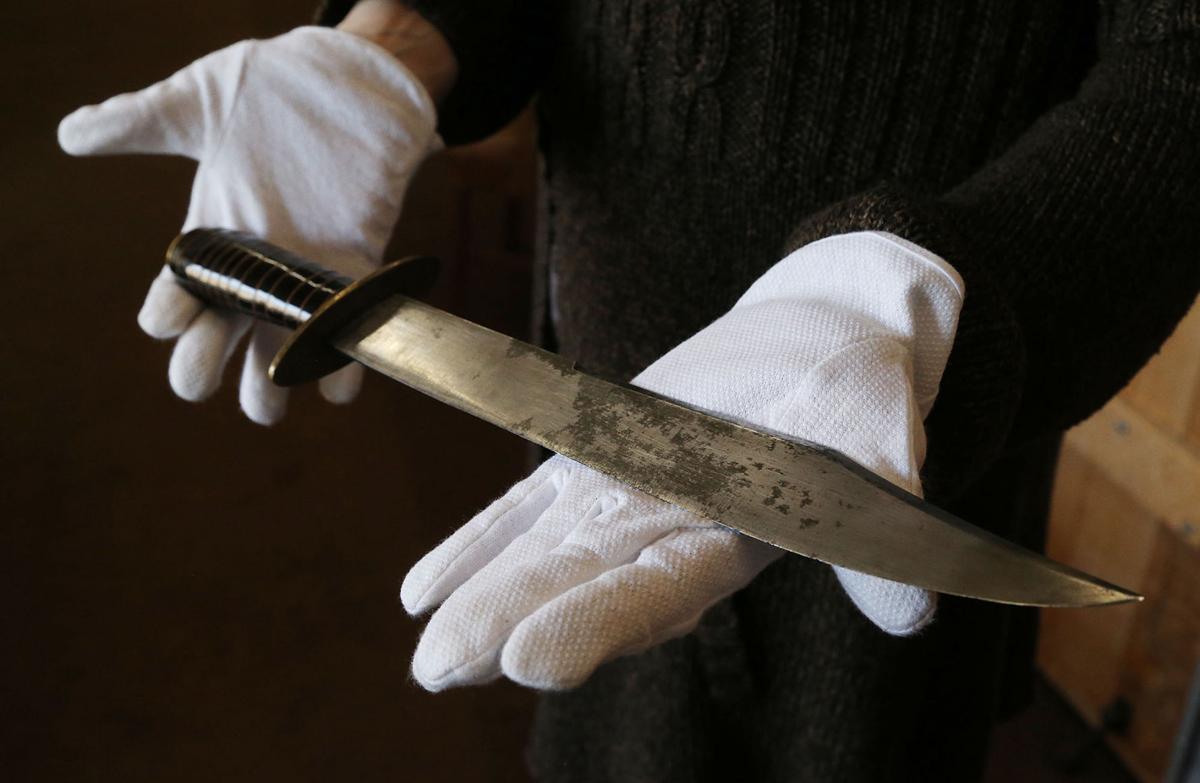 A newly donated Bowie knife at the Texas Ranger Hall of Fame and Museum. 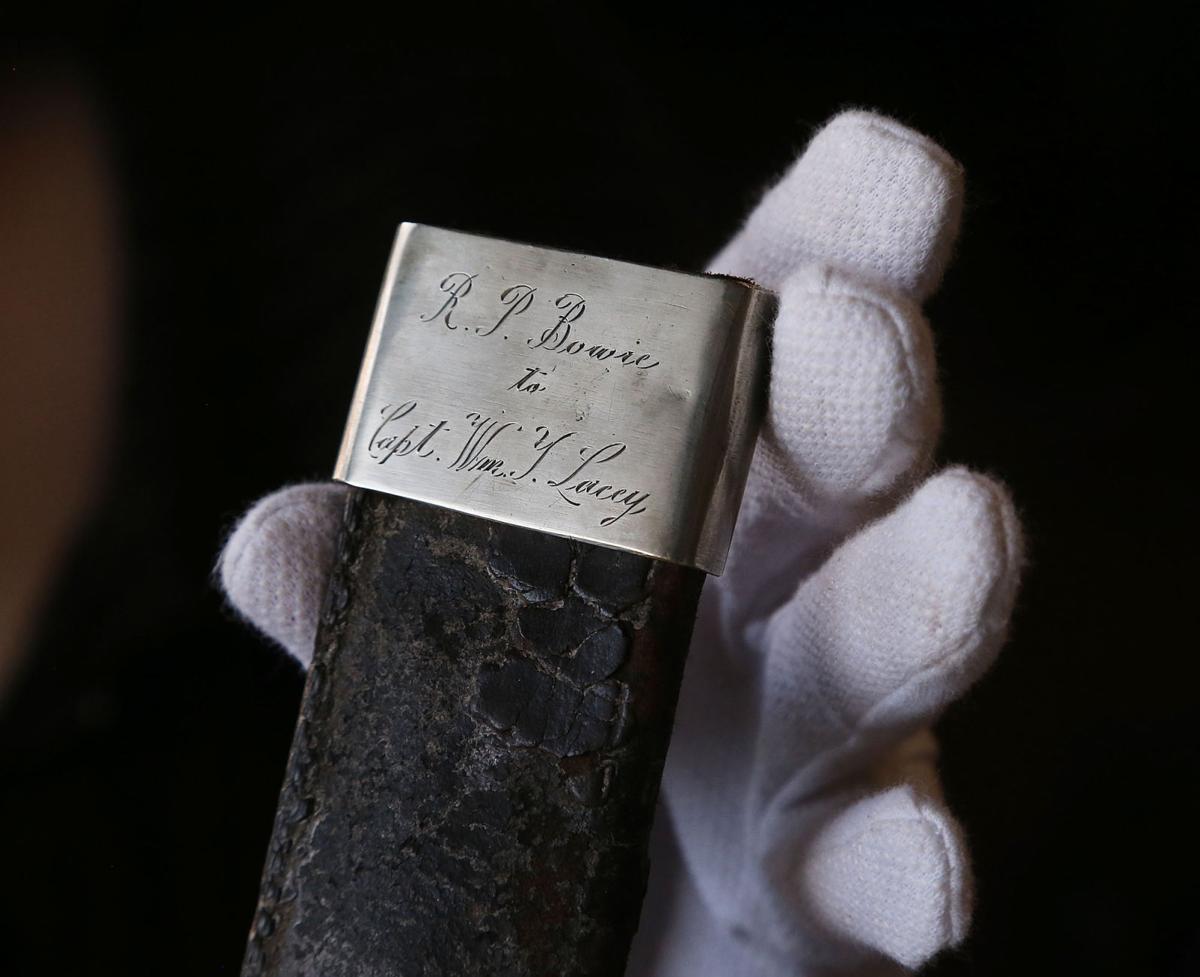 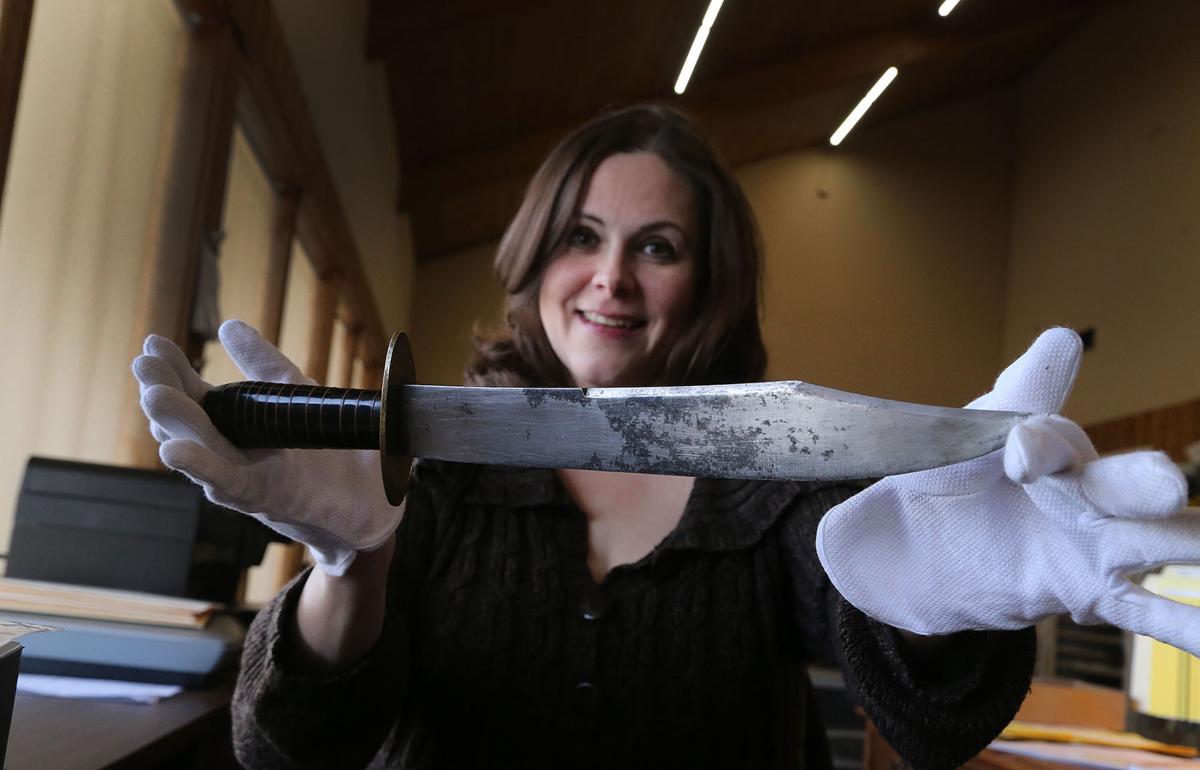 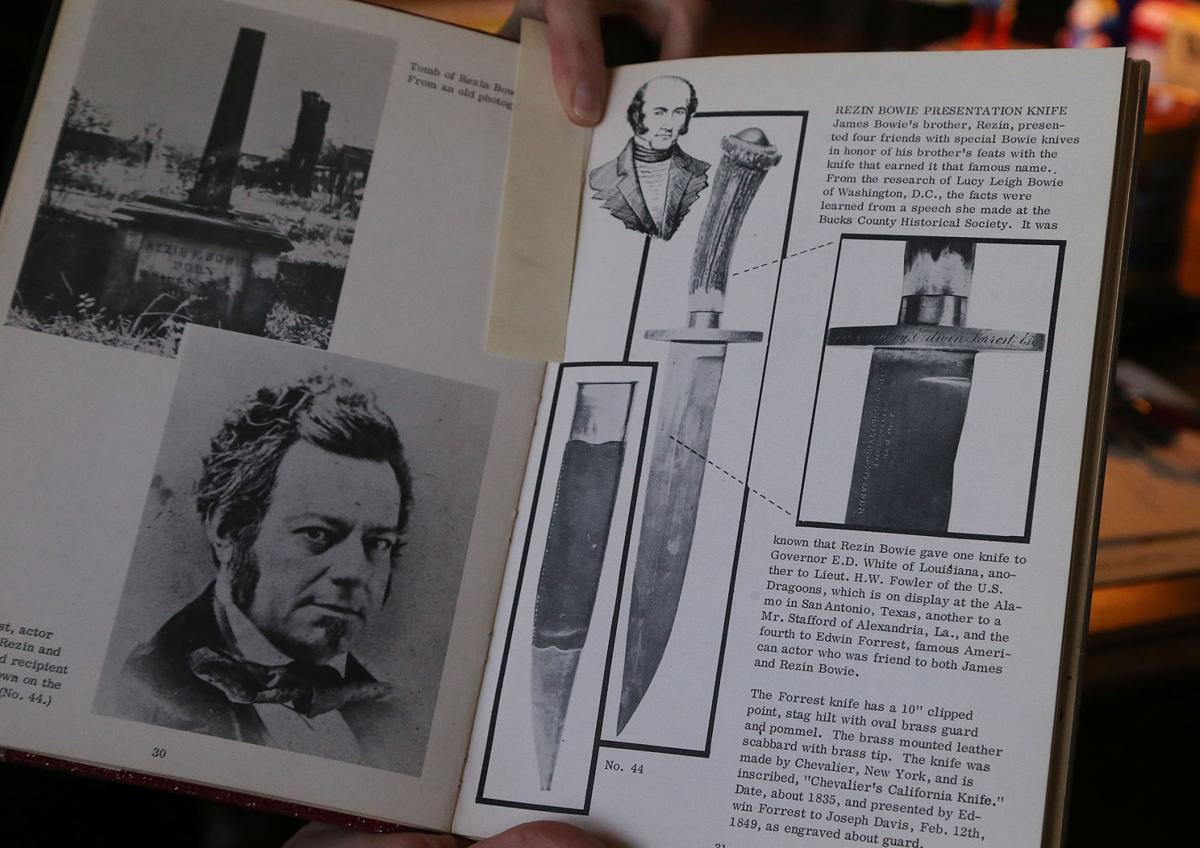 A book at the Ranger museum shows some of the history of the popular Bowie knife.

As a fearsome weapon, the Bowie knife recently donated to the Texas Ranger Hall of Fame and Museum speaks for itself.

It is 17 inches long, with a bison horn hilt and a sturdy high carbon steel blade featuring the “Texas clip” characteristic of knives made famous by James Bowie, the Alamo hero.

But a closer look at the silverwork on the knife’s scabbard gives a tantalizing sign of its true significance. Engraved in a flowery script are the words: “R.P. Bowie to Capt. Wm. Y. Lacey.”

That would appear to be Rezin Pleasant Bowie, Jim’s big brother, who helped popularize the Bowie knife in the 1830s and was known for giving them as gifts. William Lacey, or Lacy, is obscure today but accompanied Jim Bowie in his rambles around Texas and later served as a Texas revolutionary soldier, a Texas Ranger and mayor of Palestine.

The knife and a folder full of research on it arrived at the museum in December in a FedEx box from Rudolph W. Gleichman, a Pennsylvania arms collector. Ranger museum officials want to continue researching its authenticity but say it is potentially a marquee artifact for their collection. It will likely go on display this spring.

“It was a nice Christmas gift for Waco,” museum director Byron Johnson said. “It would be very significant given his association with his brother and the fact that it’s inscribed to someone who was a Texas Ranger. That makes it very worthwhile for us. I would say it will be one of the treasures we have in the museum.”

Johnson said the authenticity of the knife may never be proven, but so far he sees no reason to doubt it.

Gleichman, a former insurance underwriter who served as president of the Maryland Arms Collectors Association, spent about $400 for the knife in 1982.

“I bought the thing in the parking lot of a gun show from a picker,” Gleichman said. “I saw it for what I thought it was, an important item. I spent a year researching it. … It turned out the gentleman who owned the knife was an intimate friend of the Bowie family. Everything seemed to fall into place.”

Gleichman collected opinions of silversmiths and knife experts and published descriptions of the knife in arms collecting publications. Around 1988, he also showed it to Gaines DeGraffenreid, founding director of Waco’s Ranger museum, who was impressed and hinted that the museum would like to acquire it.

Now 91, Gleichman decided he was ready to part with his treasures.

“I don’t need money per se,” he said. “I just thought it would be wonderful since the gentleman who owned it was an important person who had a relationship with the Bowie family, it would be nice to give it to the museum that authenticates and collects these things. … It’s a treasure for anyone’s collection.”

Johnson said the knife’s story may end up like a lot of forensics investigations, based on circumstantial evidence.

He said the artifact has all the marks of a Bowie knife manufactured in the 1830s, when the knife became popular across the frontier. He said the knife is undated but may precede Jim Bowie’s death at the Alamo in 1836.

Johnson said it would not be unusual to find a forged inscription on a Bowie knife, but it seems unlikely that a forger would have chosen William Lacy as the recipient.

“There’s only about half a dozen historians who have heard of William Lacy,” he said.

William Lacy, a Kentucky native, moved to San Augustine, Texas, with his father in 1830, according to the 1881 “Encyclopedia of the New West.”

He was about 18 in 1834, when he headed out to the Tarrant County area with Jim Bowie to prospect for gold.

By this time Bowie and his knife were already a legend thanks to the notorious “Sandbar Fight” on Sept. 19, 1827, across the Mississippi River from Natchez. Bowie, who was a second to one party in a duel, ended up being attacked himself by the other party. Using a large hunting knife, he reputedly killed one opponent, badly wounded another and was hospitalized for a shot to the lung.

Bowie family lore holds that R.P. Bowie had invented the knife several years earlier on their plantation in Louisiana after Jim’s encounter with a rogue bull. The handle guard was intended to keep the blade from slipping and injuring the hand.

The knife became popular throughout the country immediately after the Sandbar fight, and R.P. Bowie had blades forged in Louisiana and Pennsylvania. Four other knives that R.P. Bowie inscribed as gifts to friends are known to exist.

Jim Bowie moved into Texas in 1830 to snap up land grants from the Mexican government and hunt for gold.

During the Texas Revolution in 1835-36, he won lasting fame as a military leader, dying in the siege of the Alamo in San Antonio.

Lacy briefly served as a captain in the revolution, then went on to organize Texas Ranger militias in East Texas in 1837. He surveyed parts of East Texas and went on to become a prosperous landowner and mayor in Palestine after the Civil War. He died in 1892.

In later life he remembered Jim Bowie as a gentleman “with no trace whatever of the border ruffian that these same wild tales have handed down to us.”

Nothing is known of what happened to the knife before or after Lacy’s death, if in fact it belonged to him.

Gleichman said that mystery has always been an intriguing part of owning the knife.

“I’ve looked at it a million times and said, ‘If you could just tell me your background history, what you’ve been through,’” he said. “That’s one of the things that just grabs you.”

The Texas Ranger Hall of Fame and Museum on Monday unveiled a major addition to its displays: a Bowie knife attributed to the family of Jim Bo…

A newly donated Bowie knife at the Texas Ranger Hall of Fame and Museum.

A book at the Ranger museum shows some of the history of the popular Bowie knife.