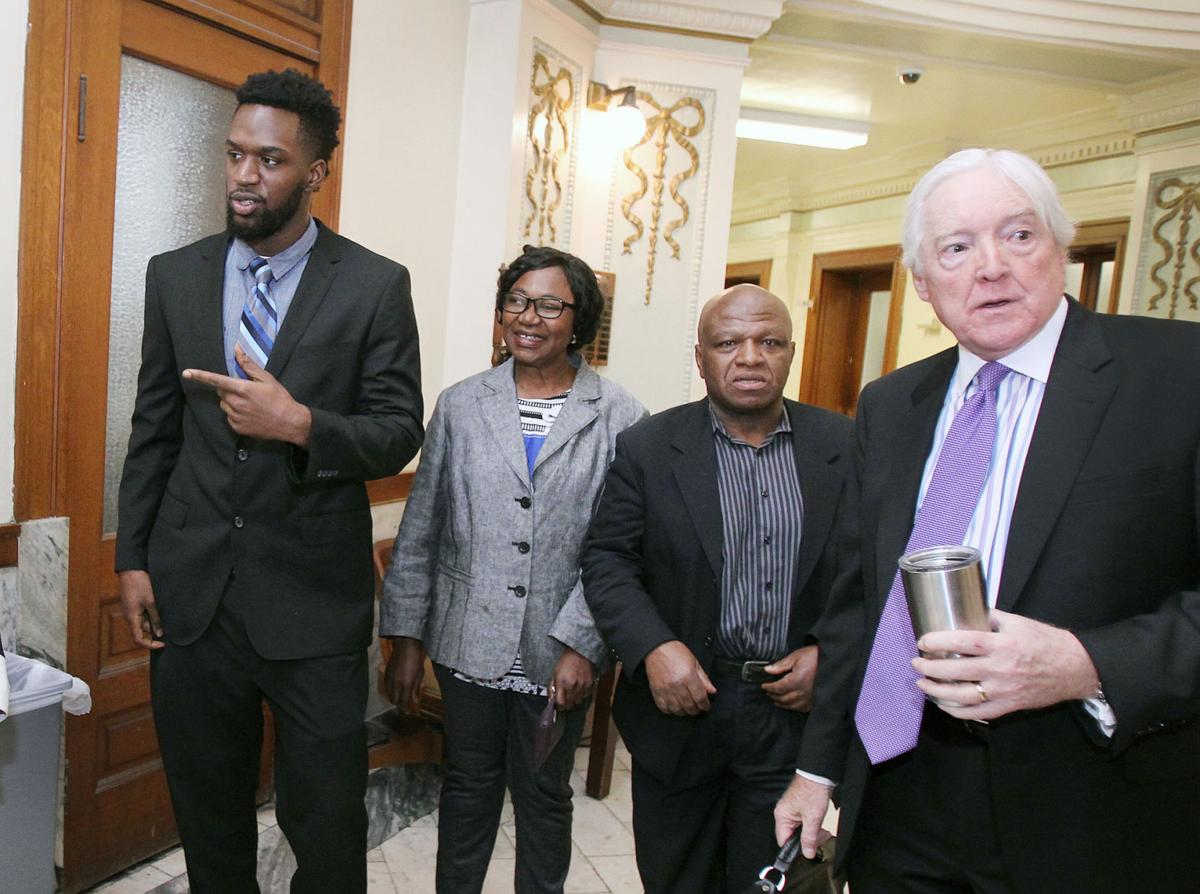 Sam Ukwuachu (from left) and his parents stand by his lawyer, William Bratton, on March 1 outside the 10th Court of Appeals, after arguments in his appeal of a 2015 sexual assault conviction. The court reversed his conviction Thursday and remanded his case for a new trial. Prosecutors plan to appeal the reversal. 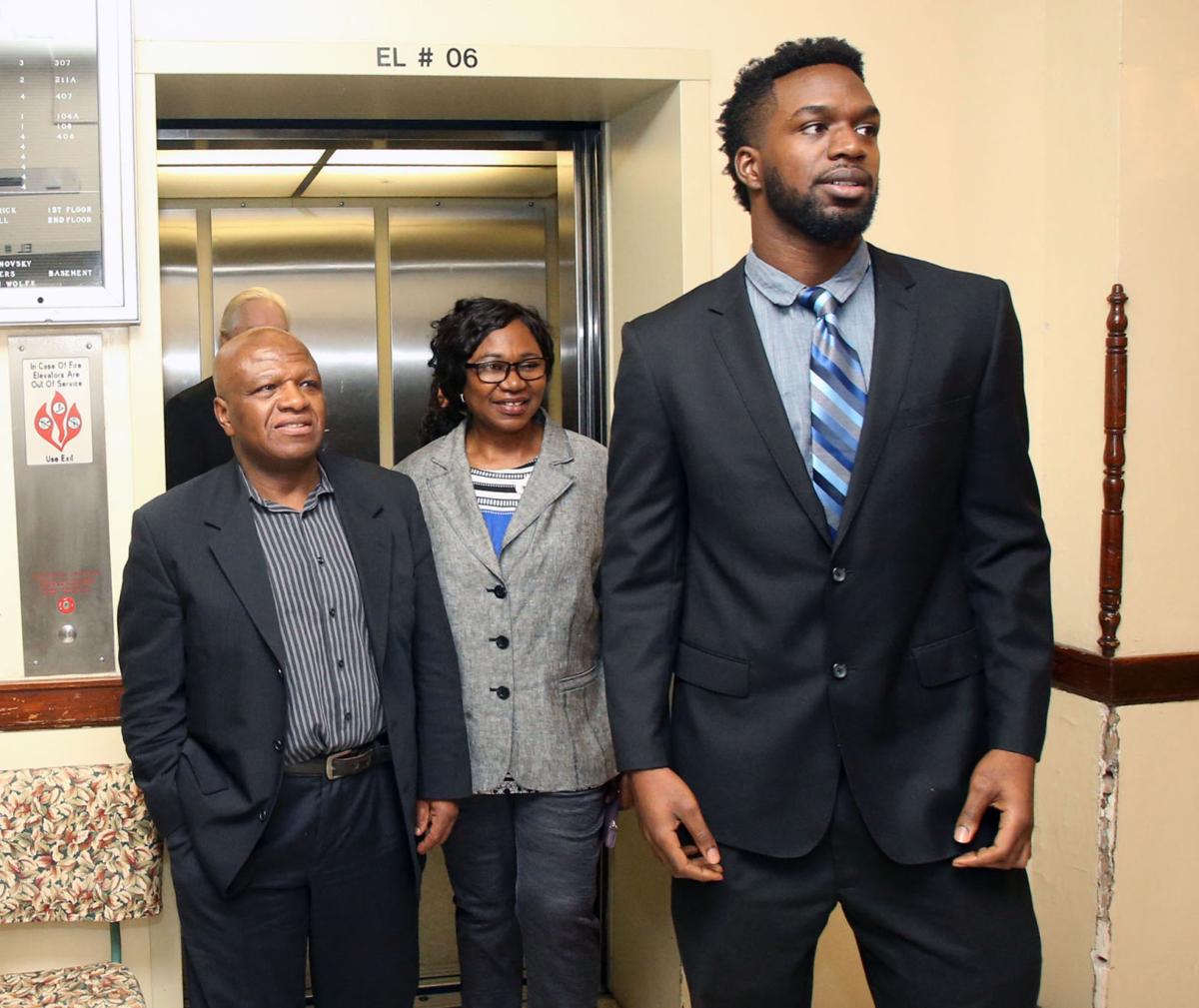 Sam Ukwuachu exits an elevator in the McLennan County Courthouse with his parents March 1 after oral arguments in his bid for a new sexual assault trial. Ukwuachu won a new trial when the 10th Court of Appeals reversed his conviction Thursday and remanded his case for a new trial. Prosecutors plan to appeal the reversal.

The jury at his August 2015 trial recommended probation for Ukwuachu, who has vowed to prove his innocence at a new trial but now faces up to 20 years in prison if he is convicted again.

Ukwuachu, who is from Pearland, claims he had consensual sex with the now-former Baylor student. Revelations from his trial and the trial of former Baylor defensive end Tevin Elliott opened the floodgates to the ongoing sexual assault scandal at Baylor. Elliott is serving a 20-year term on two 2014 sexual assault convictions.

The 10th Court ruled that Ukwuachu deserves a new trial because it said Judge Matt Johnson erred by failing to admit a series of text messages between the victim and her friend sent shortly before the incident.

The court admitted a portion of the messages but not the entire series of messages that Ukwuachu argued would have supported his defense of consensual sex and offered evidence about a prior relationship between him and the woman.

“We find that because consent was the central issue in the proceeding, we cannot say that we have a fair assurance that the erroneous exclusion of the text messages did not affect the outcome of this proceeding, especially when considered with the other alleged errors in the trial of this cause,” Gray wrote in the opinion.

Ukwuachu’s attorney, William Bratton, said in a statement Thursday he thinks the text messages could have changed the outcome of the trial.

“However, this is just the beginning of the appeal process,” Bratton wrote. “Prosecutors say they will appeal this ruling, which means we have a long way to go before this action is final. If the state appeals, I believe we have other evidence that will help us if this case proceeds in the process.

“Because of the fact the case is still under appeal, I would rather not make a further statement at this time.”

District Attorney Abel Reyna said his office would release a media statement Thursday, but he did not send one to the Tribune-Herald. Reyna declined comment when asked if his office will ask the 10th Court to reconsider its opinion or ask the Texas Court of Criminal Appeals to review the decision.

Other media outlets have quoted Reyna as saying he will ask the Court of Criminal Appeals to review the case.

The alleged victim in Ukwuachu’s case reached an undisclosed settlement with Baylor over the way school officials handled her case. She did not file a lawsuit, but Boulder, Colorado, attorney John Clune, who specializes in Title IX cases, won a settlement for her.

“This is an unfortunate ruling but one that we expect will ultimately be decided by the Criminal Court of Appeals,” Clune said Thursday. “The trial court ruled that these text messages had no bearing on consent, and we remain optimistic that the higher court will agree. Either way, the victim will continue to cooperate with the prosecution and see this case to its proper end.”

In another statement provided by Clune’s office, the father of Ukwuachu’s alleged victim said he is disappointed by the court’s opinion.

“As the father of a child whose life has been so deeply impacted by this crime, I am disheartened to read this court’s order,” he said. “What upsets me the most is that now there will be those who will waver in their belief in the validity of the outcome of this trial and in my daughter. The truth and all of the facts that supported this verdict will be filtered now through this appeal court’s statement alluding to there being ‘potential’ sexual history.

“Said another way, the order implies that even the mere suggestion of prior sexual contact equals consent for future encounters. While this philosophy is not the law, that is the message that will linger.”

Baylor had no Title IX office in 2013 but it had a Title IX coordinator who oversaw compliance with federal guidelines governing sexual discrimination and other gender-based violations.

Now, Baylor has a Title IX office with a coordinator and several full-time investigators.

The prosecutors’ objections to McCraw’s testimony led to several conferences in the judge’s chambers, which included a lawyer for Baylor who attended each day of the trial. The judge ruled McCraw’s finding that there was not sufficient evidence to “move forward” with the case was not legally admissible for the jury to hear.

When McCraw took the stand, she misspoke, telling jurors different information that what she said in the judge’s chambers that she was going to say on the stand.

McCraw testified that the victim told her she kissed Ukwuachu and had oral sex with him before the night of the sexual assault, when the victim actually told McCraw that Ukwuachu tried to kiss her and tried to have oral sex with her before she rebuffed him.

She apologized to the jury and said she made a mistake. But LaBorde followed her into the courthouse rotunda and berated her for revictimizing the woman and caring more about trying to protect the university.

The confrontation left McCraw, then a 33-year Baylor employee, in tears and left bad blood between Baylor and the district attorney’s office, courthouse officials said. Baylor officials called for a meeting with prosecutors the next day.

The DA’s office has since asked Baylor to provide it with Title IX records from other women who reported they were sexually assaulted at Baylor. That possibly led to Wednesday’s arrest of former All-Big 12 tight end Tre’Von Armstead in Jefferson County and Thursday’s arrest of former Baylor football player Myke Chatman in Houston. Armstead and Chatman each face sexual assault indictments from an alleged 2013 incident while they were at Baylor.

They are the fourth and fifth former Baylor football players to be indicted on sexual assault charges since 2012. Shawn Oakman, a former defensive end, is awaiting trial.

The alleged victim in Ukwuachu’s case, who was a freshman athlete at Baylor, told jurors that Ukwuachu, a freshman All-American at Boise State University before transferring to Baylor, sexually assaulted her at The Groves apartment on South University Parks Drive after a Baylor homecoming party in November 2013.

She said she saw Ukwuachu at the party and he asked her if she wanted to go eat later. He came to her apartment to pick her up, but instead of going to a restaurant or to another party, Ukwuachu drove to his apartment, the woman said.

She said she started to get a little worried, so she texted a friend that they were going to his apartment.

While watching TV in his room, the 5’2” woman said the 6’4” Ukwuachu started “making moves” and trying to pull off her dress. As he became more aggressive, Ukwuachu forcefully turned her over and stripped off the rest of her clothes before sexually assaulting her, she told the jury.

She testified that she was screaming and yelling “no” throughout the assault. At one point, she said, Ukwuachu told her, “This isn’t rape.” He also asked if she was going to call “the cops,” she said.

She ran to the bathroom. When she came out, Ukwuachu appeared to be asleep, so she left his apartment and called a friend to come pick her up, she said.

But the next morning, with coaxing from her friends, she called police and went with her friends to the hospital for a sexual assault exam.

Baylor officials took no action against Ukwuachu and cleared him to play. Waco police did not arrest Ukwuachu but sent the case to the DA’s office. That led to Ukwuachu’s indictment.

In a victim-impact statement after Ukwuachu was sentenced, the woman told Ukwuachu he robbed her of her virginity and part of her identity. She said she thinks of herself at times now merely as the “girl who got raped.”

“At times, I want to cry a tsunami,” she said. “Not a river. Rivers are too calm and too peaceful.”

In an email to the Tribune-Herald on Monday, Ukwuachu continued to assert his innocence and predicted he will be exonerated.

“But before then I will publicly expose these corrupt prosecutors so the world will know who really had the ‘winning at all costs’ attitude,” his email said. “Then I will file suit against these bas----s and make sure they never do this to anybody EVER AGAIN.”

Ukwuachu’s email also continued to claim, as his attorney did on appeal, that prosecutors abused the grand jury process to intimidate his former roommate, whom he said was at home during the alleged attack and did not hear any screaming or sounds of struggle.

As the Baylor sexual assault scandal unfolded, Ken Starr was removed as president and Art Briles was fired as head football coach in May. Former Athletics Director Ian McCaw was placed on probation and resigned days later.

Baylor’s board of regents released a 13-page “Findings of Fact” document based on a nine-month investigation by Philadelphia law firm Pepper Hamilton into the school’s handling of sexual assault allegations. The document reported details of a “fundamental failure” by the school to adequately respond to sexual assault claims and a football program that operated “above the rules.”

Since 2011, 17 women have reported sexual or domestic violence against 19 Baylor football players, including four gang rapes, according to Baylor regents.

There are six pending Title IX lawsuits against Baylor, and Pepper Hamilton faces a negligence and defamation lawsuit filed by former athletics staffer Tom Hill, who was also fired during the sexual assault fallout.

In the latest legal filing related to Baylor University’s sexual assault scandal, the school pushes back on claims that it violated Title IX, …

Sam Ukwuachu returned to a McLennan County courtroom Wednesday, hobbling on crutches while his attorney argued that the former Baylor Universi…

Sam Ukwuachu (from left) and his parents stand by his lawyer, William Bratton, on March 1 outside the 10th Court of Appeals, after arguments in his appeal of a 2015 sexual assault conviction. The court reversed his conviction Thursday and remanded his case for a new trial. Prosecutors plan to appeal the reversal.

Sam Ukwuachu exits an elevator in the McLennan County Courthouse with his parents March 1 after oral arguments in his bid for a new sexual assault trial. Ukwuachu won a new trial when the 10th Court of Appeals reversed his conviction Thursday and remanded his case for a new trial. Prosecutors plan to appeal the reversal.