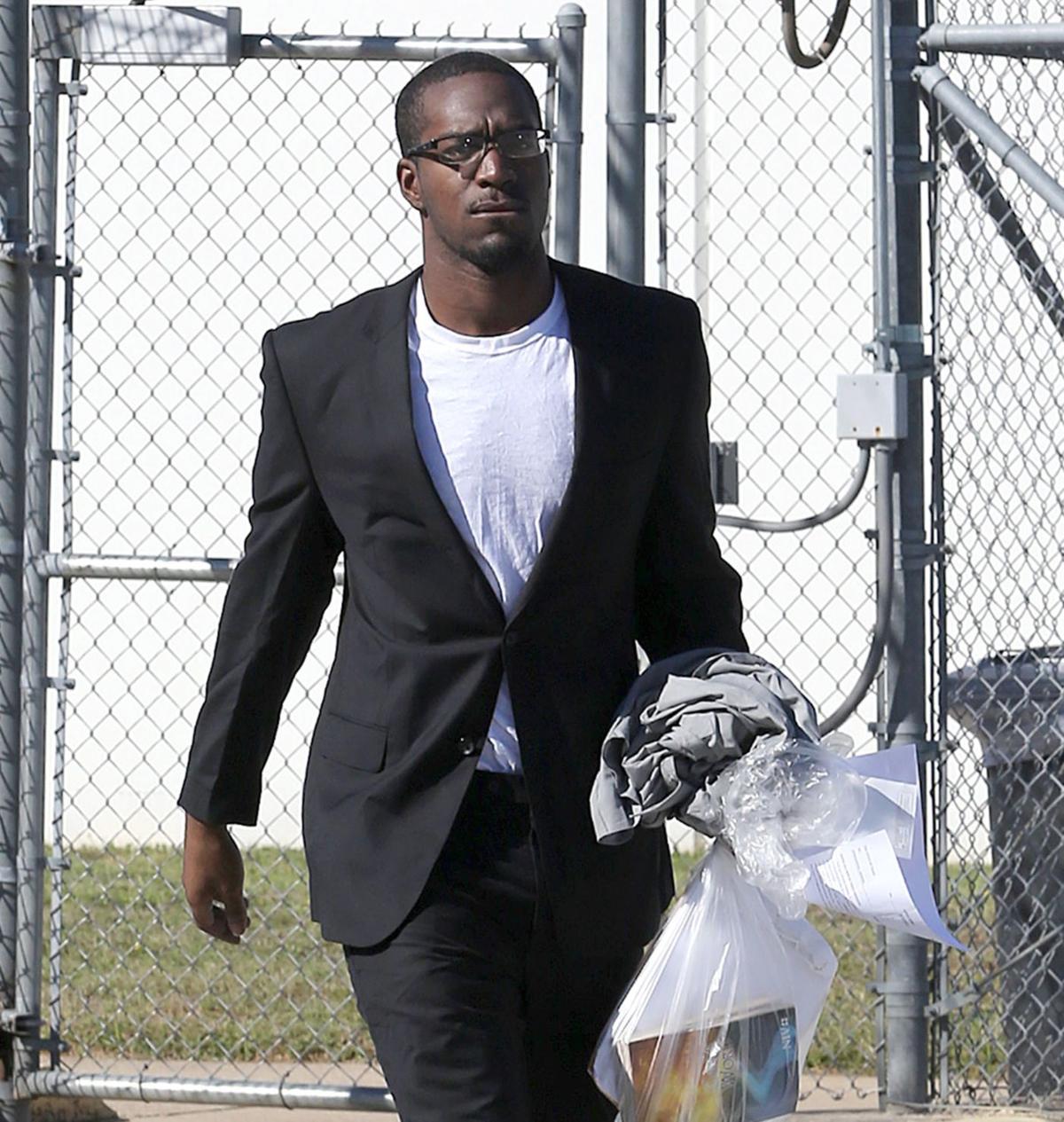 Sam Ukwuachu walks out of the McLennan County jail after posting an appeal bond. 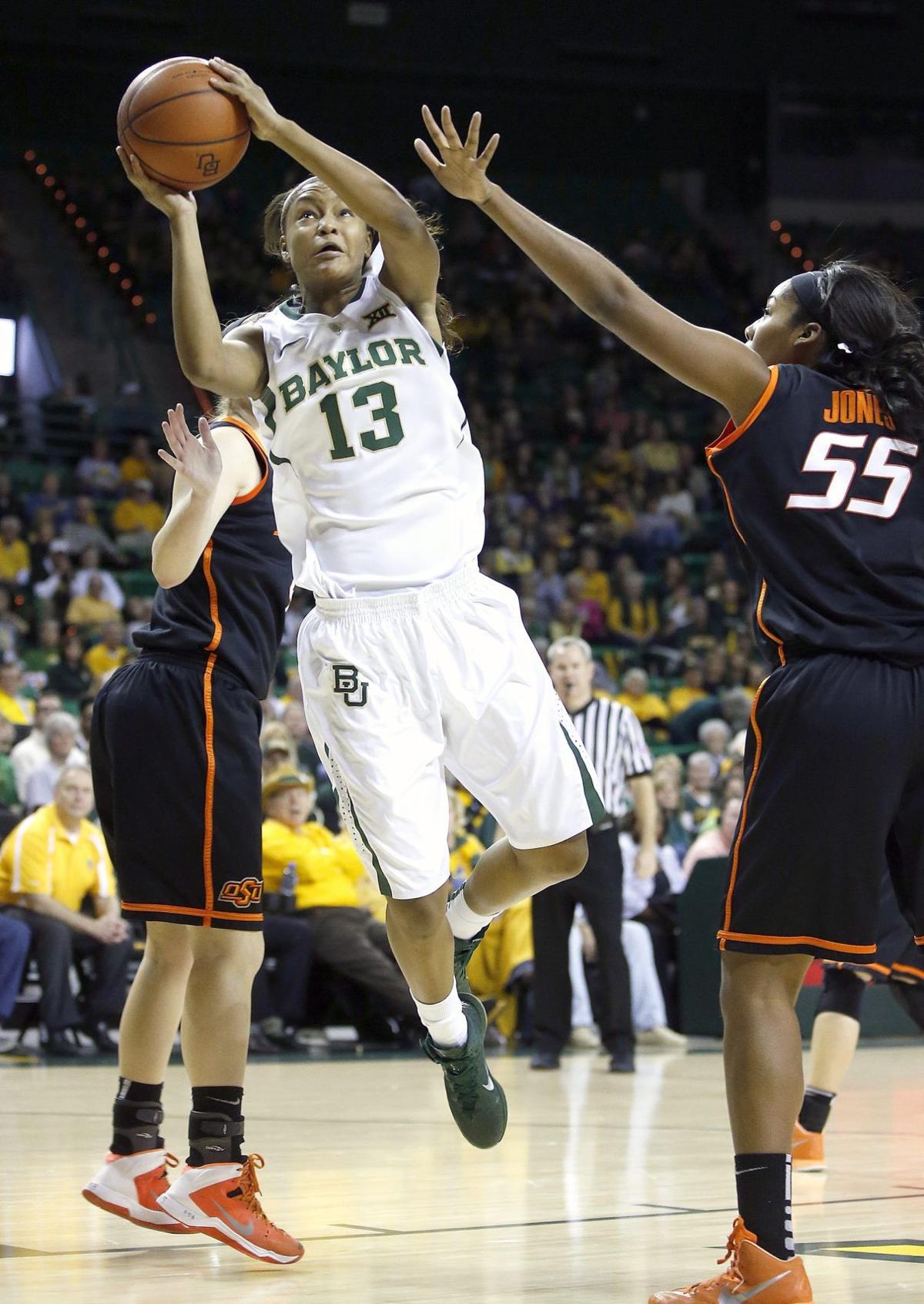 Nina Davis had 22 points and 11 rebounds against Oklahoma State. 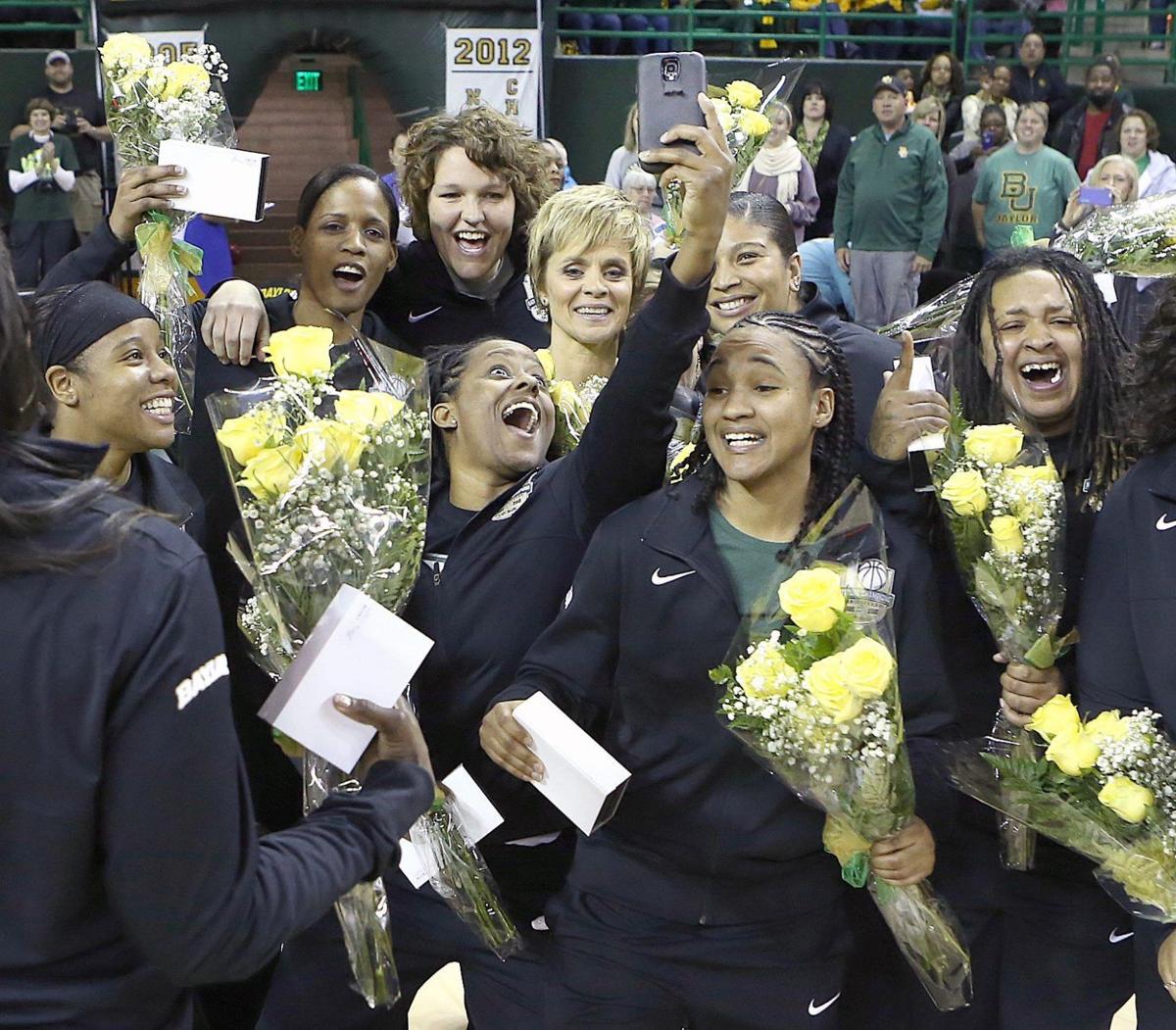 Baylor’s 2005 national championship team poses for a selfie before the Lady Bears’ game against Oklahoma State. The title helped earn national recognition, which Baylor used to win another title in 2012. 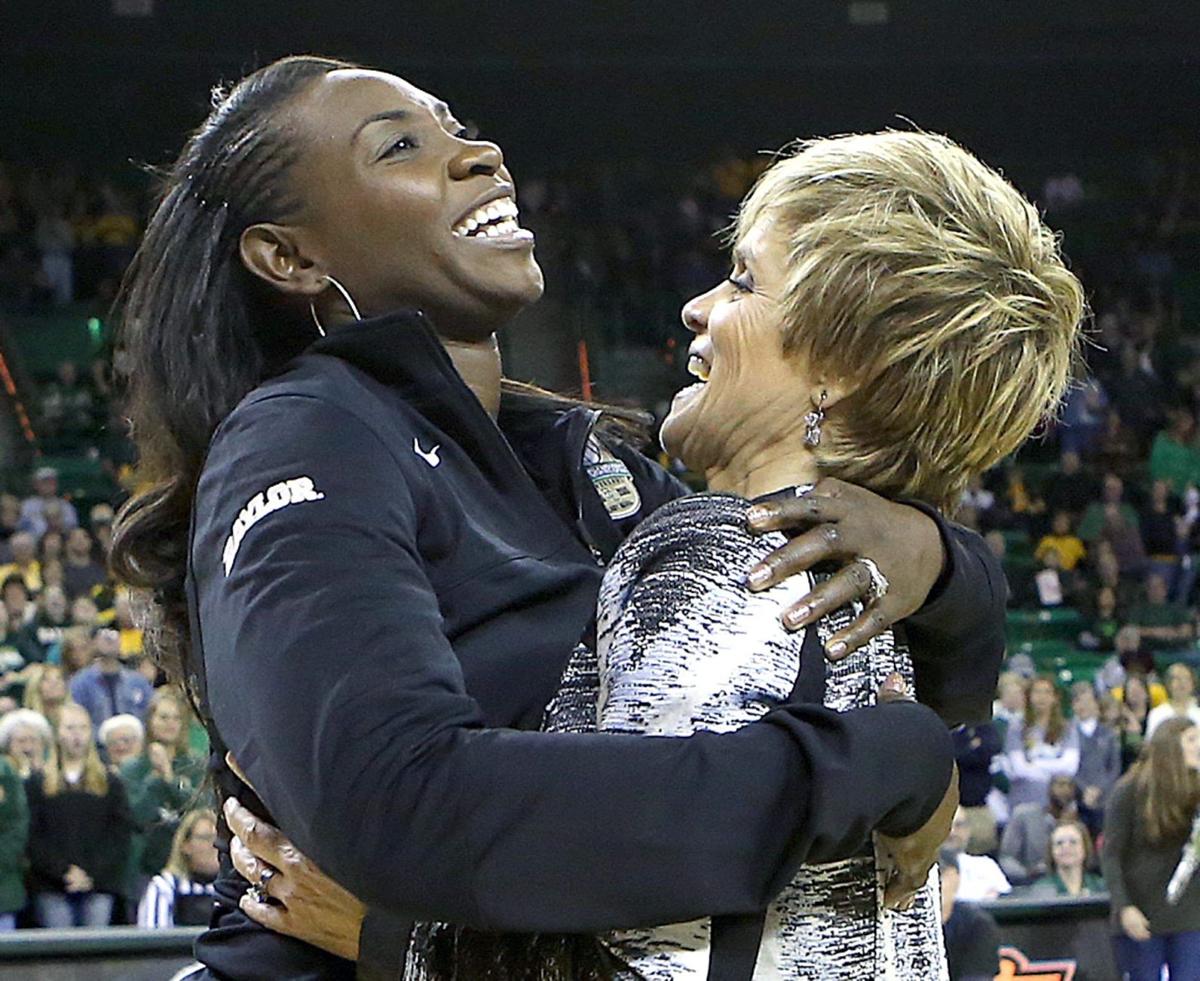 Sophia Young-Malcolm (left) hugs coach Kim Mulkey as Baylor's first national champion women's basketball team was honored during halftime of the Oklahoma State game on Jan. 3, 2015. Young, who was named the NCAA tournament's most outstanding player as a junior all-American in 2005, currently plays for the San Antonio Silver Stars in the WNBA.

Ukwuachu’s attorney, William A. Bratton III, alleges six points of error in a 52-page appeal recently filed with Waco’s 10th Court of Appeals, including allegations that prosecutors improperly used the grand jury process to compel the testimony of Ratu Peni Tagive, Ukwuachu’s roommate at the time at an off-campus apartment.

A 54th State District Court jury convicted Ukwuachu in August 2015 of sexually assaulting a female Baylor athlete in 2013 and recommended he be placed on probation. Judge Matt Johnson sentenced the former Boise State Freshman All-American to 10 years’ probation and jailed him for 180 days as a term and condition of his probation.

Ukwuachu, a standout defensive end from Pearland, claims he had consensual sex with the now-former Baylor student. He stayed in the McLennan County Jail just more than two months before Johnson set a $100,000 bond allowing Ukwuachu to remain free pending his appeal.

Many of the revelations that came out during Ukwuachu’s and former Baylor football player Tevin Elliott’s sexual assault trials about how Baylor officials responded to sexual assault allegations led to the firing of Baylor President Ken Starr, head football coach Art Briles and others. Starr has since resigned his role as chancellor and Athletics Director Ian McCaw also resigned in the wake of a scathing report by Philadelphia-based law firm Pepper Hamilton, which was hired by Baylor’s board of regents to conduct the study.

Elliott is serving a 20-year prison term after his conviction on two counts of sexual assault in 2014.

In his first two points of appeal, Ukwuachu alleges that prosecutors improperly used phone records from Tagive to try to force him to change his testimony against Ukwuachu and did not substantiate or introduce the phone records into evidence before cross-examining Tagive and another witness about the records.

Tagive testified he was at the apartment and trying to sleep when he heard Ukwuachu and a woman enter the apartment. He said went to sleep and didn’t hear anything else the rest of the night.

The woman testified that she doesn’t think Tagive was there because she was screaming loudly during the assault and she thinks Tagive would have heard her.

The phone records purported to show that Tagive was in another part of Waco at the time of the assault.

“The cross-examination created a false impression with the jury that Mr. Tagive was placing a call or text to (a woman) from another location other than his apartment,” the appeal brief states. “No such evidence of the location of Mr. Tagive’s telephone was ever introduced into evidence during trial.”

The appeal also alleges that prosecutors subpoenaed Tagive before a grand jury a month before Ukwuachu’s trial began and questioned him under oath. They also threatened to charge him with perjury during the trial, the appeal alleges.

“Ultimately, Mr. Tagive testified, but was influenced in his testimony by the threats of the prosecutor,” the appeal states. “The illegal use of the grand jury by the prosecutor to intimidate the witness” violated Ukwuachu’s right to due process, the appeal charges.

The appeal also alleges that the testimony of Jacqueline Wonenberg, a former girlfriend who lived with Ukwuachu in Boise, Idaho, was improperly allowed because the door to her rebuttal testimony was opened by the prosecutor asking Ukwuachu if he respects women.

Wonenberg testified that she and Ukwuachu had a rocky relationship and that he hit her once and prevented her from leaving their residence.

The appeal alleges her testimony should not have been admitted because “the issue was a collateral issue created by the state’s own cross-examination of the appellant. As such, extrinsic evidence was not admissible in order to disprove the appellant’s response,” the appeal claims.

The former Baylor athlete who Ukwuachu raped testified that she met Ukwuachu around Baylor’s athletic complex and they dated casually. She said he tried at one point to escalate their relationship, but she told him not to rush and he complied with her wishes.

She went to his apartment after a homecoming dance in October 2013 and said he sexually assaulted her as she screamed for him to stop.

She went to the hospital the next day. Baylor officials investigated her allegations, ultimately ruling that there was not enough evidence to “move forward.”

Waco police also investigated but did not arrest Ukwuachu. Instead, police turned the case over to the district attorney’s office for screening. That led to Ukwuachu’s indictment.

If Ukwuachu is granted a new trial, he again will face up to 20 years in prison if convicted by another jury.

Can the sunshine of transparency save Baylor University? Q&A with former Baylor President and Chancellor Ken Starr

Inside: Watch the complete video of our Wednesday interview with Starr.

These Lady Bears ‘finished the job’ with '05 national title

More voices have joined the chorus calling for further transparency from Baylor University’s board of regents a day after former President and Chancellor Ken Starr said he hopes the public will get a clearer picture of how the university has handled sexual assault allegations.

Watch Now: Why are federal elections held on Tuesdays?

Watch Now: Why Thanksgiving turkeys will be smaller this year

Watch Now: Why Thanksgiving turkeys will be smaller this year

Sam Ukwuachu walks out of the McLennan County jail after posting an appeal bond.

Nina Davis had 22 points and 11 rebounds against Oklahoma State.

Baylor’s 2005 national championship team poses for a selfie before the Lady Bears’ game against Oklahoma State. The title helped earn national recognition, which Baylor used to win another title in 2012.

Sophia Young-Malcolm (left) hugs coach Kim Mulkey as Baylor's first national champion women's basketball team was honored during halftime of the Oklahoma State game on Jan. 3, 2015. Young, who was named the NCAA tournament's most outstanding player as a junior all-American in 2005, currently plays for the San Antonio Silver Stars in the WNBA.