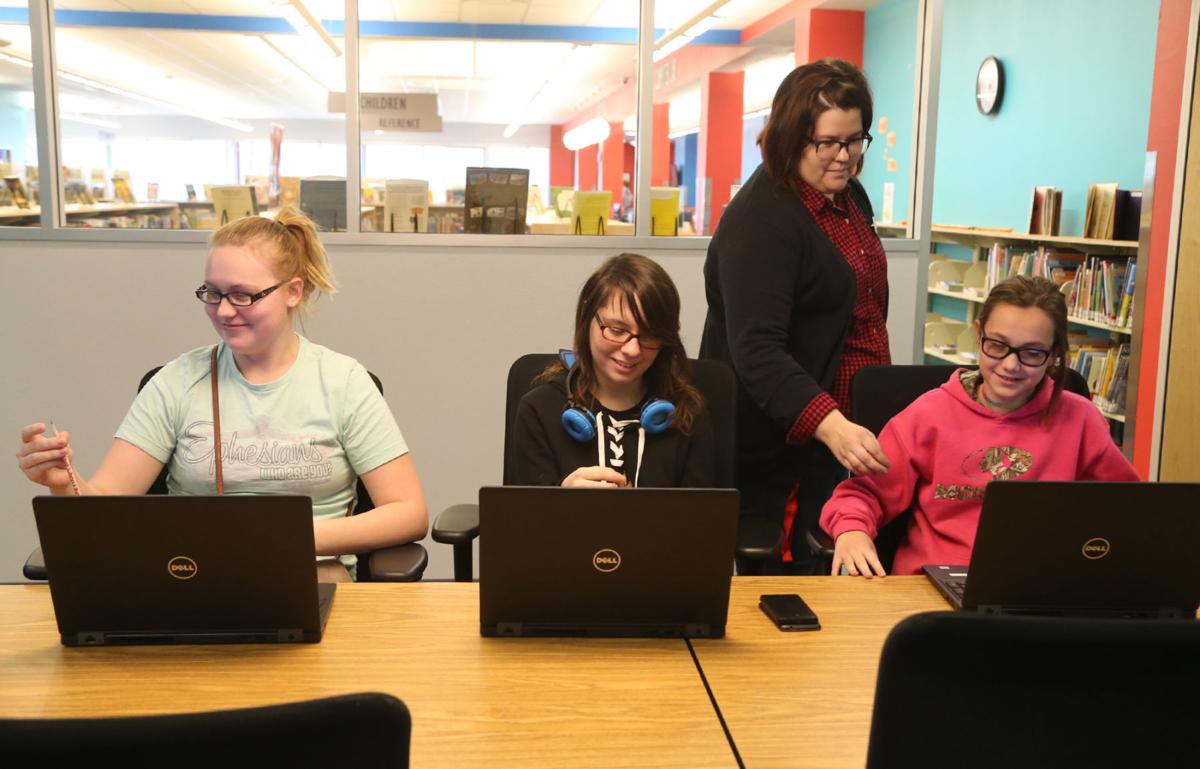 Librarian Sarah Colbert works with Carrie Pate, Hannah Salinas and Reighlynn Stewart at the first meeting of the Girls Who Code club Wednesday at the East Waco Library. 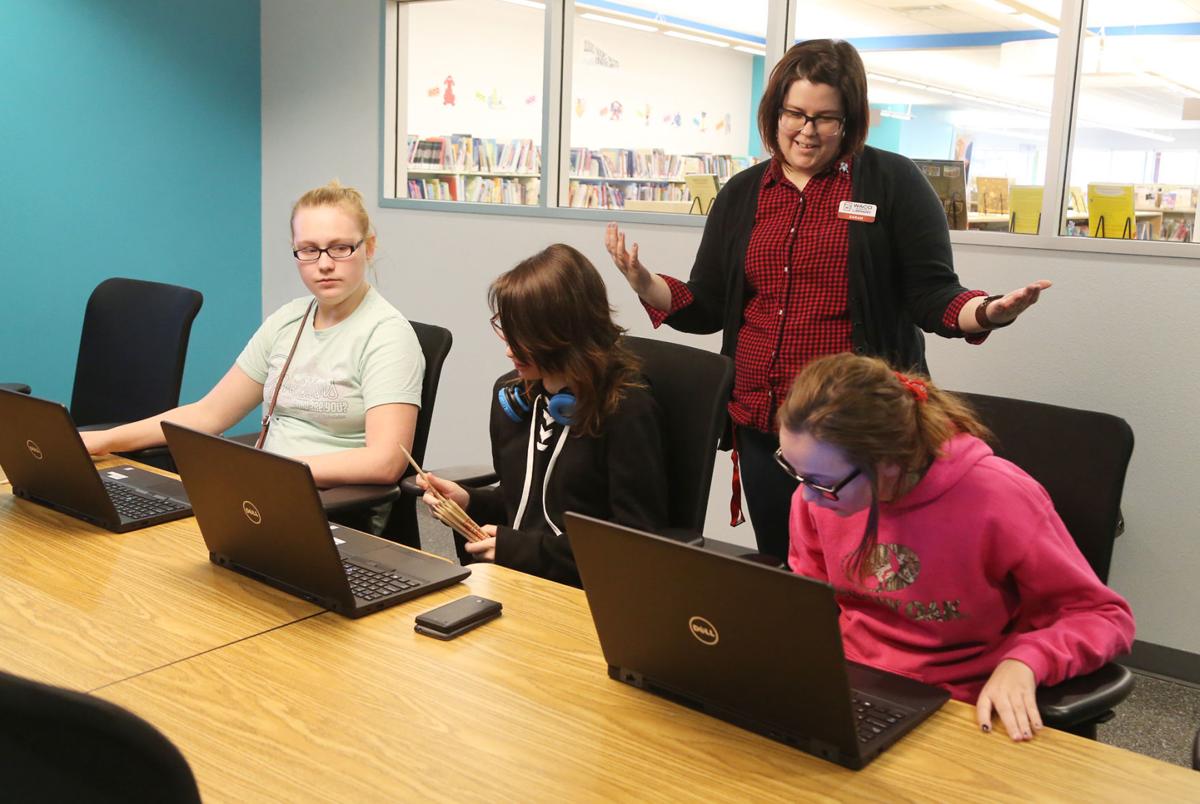 Librarian Sarah Colbert works with Carrie Pate, 24, Hannah Salinas, 14, and Reighlynn Stewart, 11, at the first meeting of the Girls Who Code club Wednesday at the East Waco Library 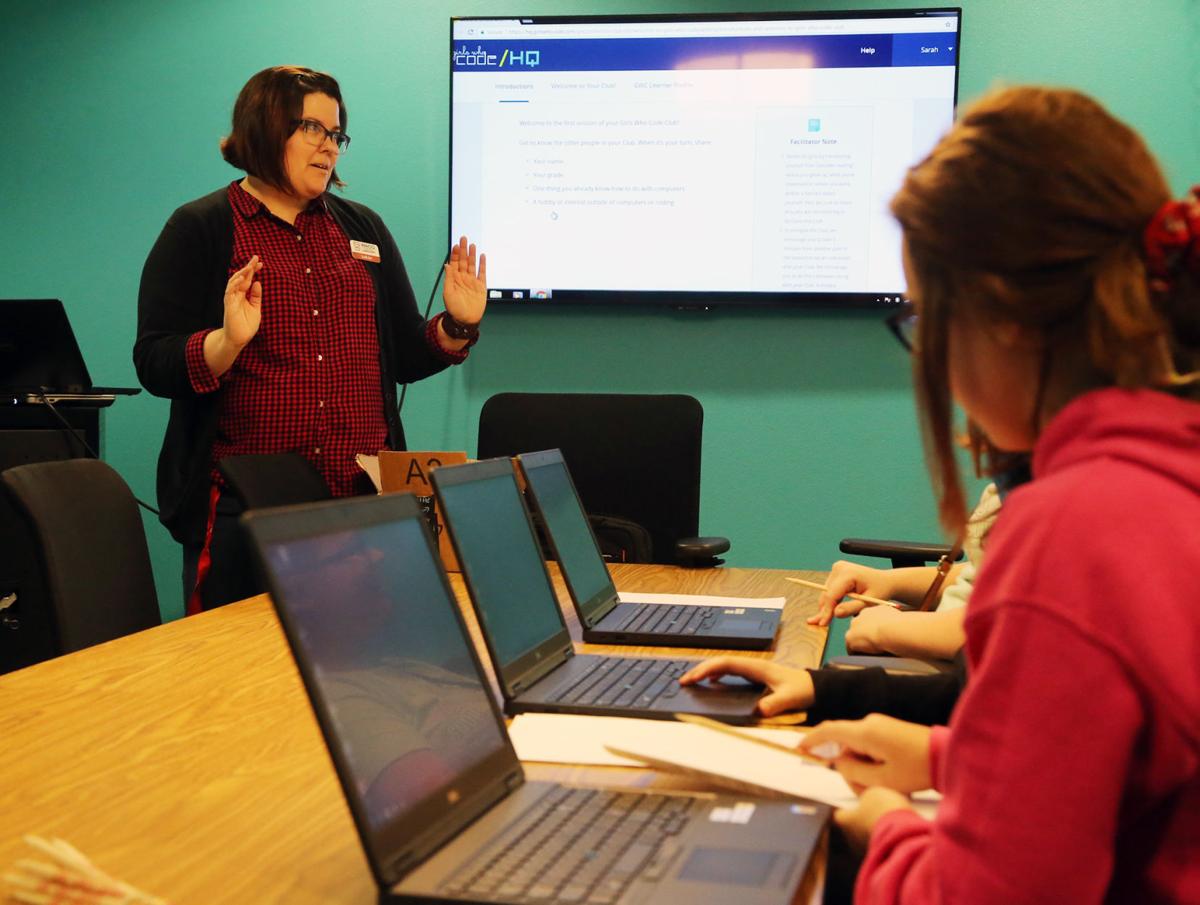 Librarian Sarah Colbert gives instructions for the first meeting of the Girls Who Code club Wednesday at the East Waco Library. 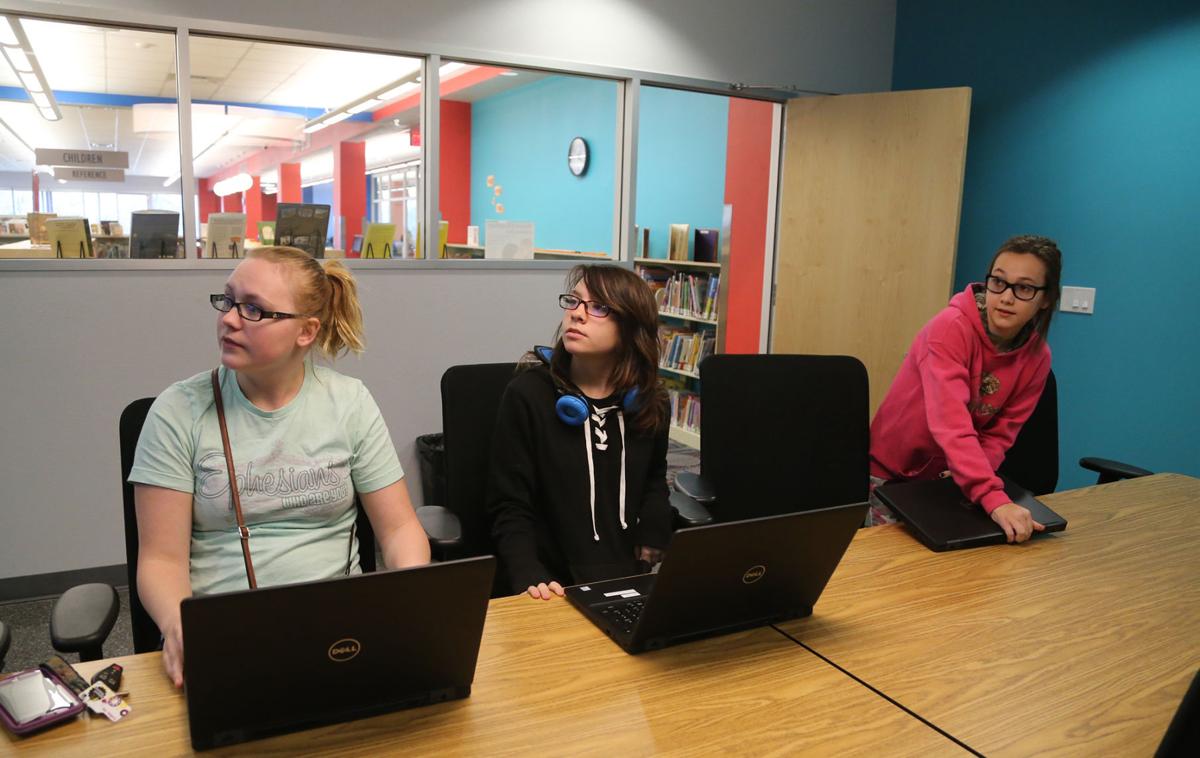 Sisters Carrie Pate, 24, Hannah Salinas, 14, and Reighlynn Stewart 11, gear up for the first meeting of the Girls Who Code club Wednesday at the East Waco Library.

When Midway High School seniors Yanessa Vea and Shilpi Karan entered their first computer science class last school year, they were two of only three girls in a class of 20, they said.

Though the two have always been fascinated by how computer software works on phones and in video games, they were late to the game when they finally felt confident enough to actually sign up for a course and learn more, they said.

“We’ve never been told we can’t do this, but it’s implied,” Vea said. “There’s pressure, but nobody tells you, ‘You can’t do that.’ You’re not told you can’t do this because you’re a girl, it’s just kind of something that you know (because) usually guys do this, so you’re not as encouraged to do it.”

The computer class has a similar ratio of males to females this year, the girls said. But a new computer science club at Midway High School and at least two similar girls-only computer science clubs that have popped up in McLennan County within the last six months are helping the seniors and other students feel more empowered to bridge a gender gap in science, technology, engineering, arts and math education at an earlier age, local school officials said.

Called “Girls Who Code,” Midway High School and the Waco-McLennan County Library both started clubs this year that are connected to a national nonprofit of the same name, focused on giving young girls computer skills critical to today’s job market.

Midway High’s program started in September. It’s open to intermediate, middle and high school girls, and meets on a weekly basis to go through different coding-related curricula and projects. The library’s program launched Wednesday at the East Waco Library, and meets weekly from 4 to 5:30 p.m.

“The STEAM initiative, and especially to get girls into it, there’s such a huge push for it right now because they just keep telling us there’s going to be all these jobs and no qualified people,” said Jessica Emmett, the Community Services Supervisor at the library. “We can definitely be a part of helping that and trying to counter that. … It’s nice our library can be part of something that’s sort of bigger than Waco.”

“What I’ve found with working with girls and women in general is they’re able to get through that hump of critical thinking a lot quicker than men. They’re able to think outside the box when it comes to coding. They’re able to look at things from different angles and be a lot more objective than men can be,” Blansit said. “They want to try and get it there, they want to be a better programmer than their male counterparts and in the industry, most of the time it’s just going to be guys because that’s what we’ve been told is the norm.”

And when students live in a county that still relies heavily on farming, warehouse and industrial work, bridging the gender gap in cities like Waco can be an even greater challenge, he said. The clubs are only a sign of small shift toward a more technological mindset in the area, Blansit said.

“It’s what I tell my students all the time. You’re doing this here at school, but you need to move; go to Dallas or Austin,” Blansit said. “But more of these programs are popping up in the county because tech is more everyday life. Your phone, your TV, you’re on software every day, and we need more people to support that because what we find out is we’re in a shortage.”

“Statistically, that’s the drop-off for girls. When they’re in elementary school, they love science and they think it’s fun, but once they get into middle school, it gets a little harder and their grades may slip and they may decide they don’t like it,” said Melissa Green, the Girl Scouts of Central Texas program and teen mentor specialist. “Or that’s the first time in their lives they’re told by someone that girls aren’t good at science and math.”

So far, her Girl Scouts have coded eight different applications, and they’re beginning to learn about circuitry and how to code robots, Green said. Later this year, they’ll learn about e-textiles, like using conductive thread to light up a T-shirt, sweater or other items through coding.

“It’s about time. We’re behind the curve on that here in Waco,” Green said. “Our council covers 46 counties, and I work directly with Austin. Obviously, the things we’re doing here in Waco have been done in Austin for a few years, but I think a lot of that is they have those companies there willing to donate time and resources. With Dell, Samsung and Apple down there, they’re willing to give up time and resources and we don’t have those kind of businesses here in Waco. It’s taken some time, because it’s not just about getting these programs for girls, it’s about getting these people trained.”

But whether students go on to pursue computer science careers or something else, the skills are still important enough for them to learn at a young age, Blansit said. A multitude of career paths now rely on some kind of background knowledge in computer science, he said.

For Karan, who is still deciding what she wants to accomplish after high school, Girls Who Code has been the bridge to her next step, she said.

“In the future, I want to go somewhere in the medical field,” Karan said. “Any type of career you’re trying to pursue, you need some sort of computer background and I think computer science is helpful and good knowledge to have.”

Librarian Sarah Colbert works with Carrie Pate, Hannah Salinas and Reighlynn Stewart at the first meeting of the Girls Who Code club Wednesday at the East Waco Library.

Librarian Sarah Colbert works with Carrie Pate, 24, Hannah Salinas, 14, and Reighlynn Stewart, 11, at the first meeting of the Girls Who Code club Wednesday at the East Waco Library

Librarian Sarah Colbert gives instructions for the first meeting of the Girls Who Code club Wednesday at the East Waco Library.

Sisters Carrie Pate, 24, Hannah Salinas, 14, and Reighlynn Stewart 11, gear up for the first meeting of the Girls Who Code club Wednesday at the East Waco Library.