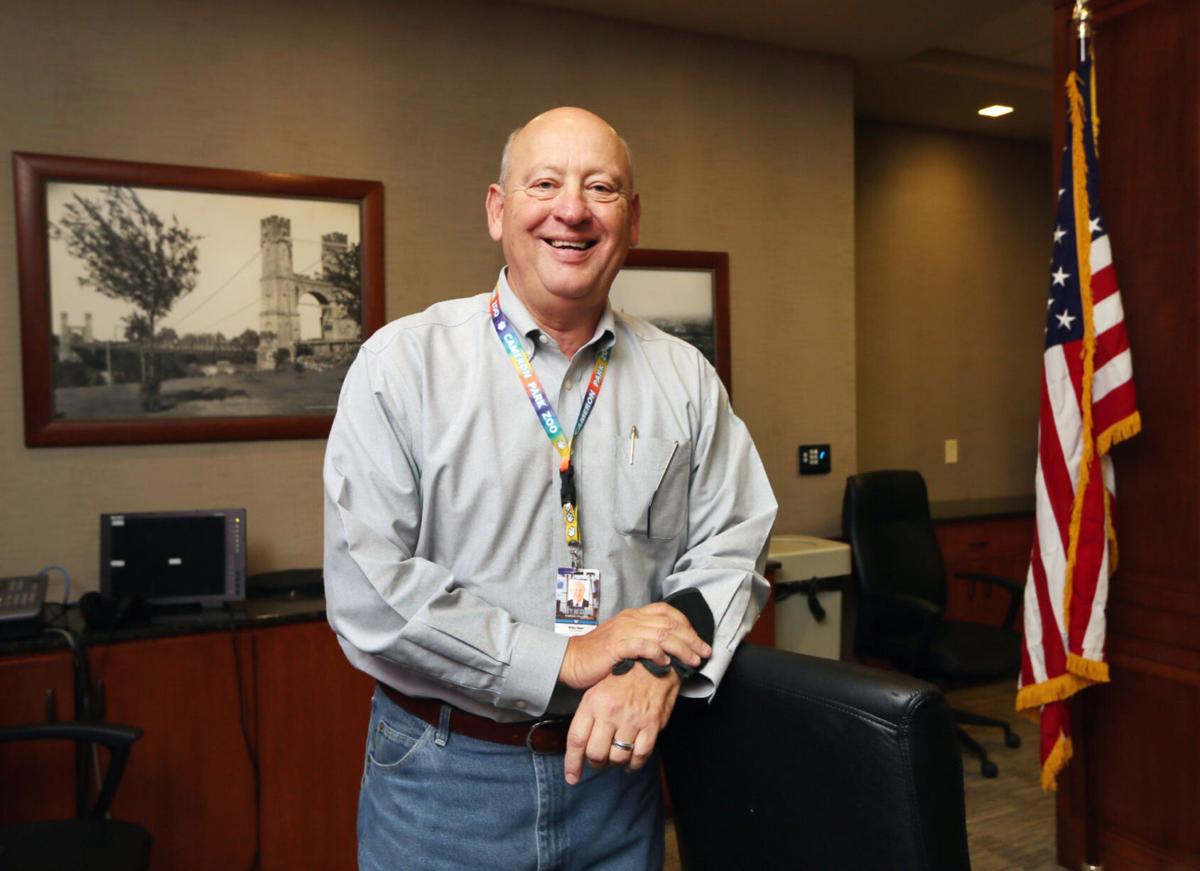 Wiley Stem III started working on a city survey crew when he was a college student and retired as city manager earlier this month, after a 44-year career. 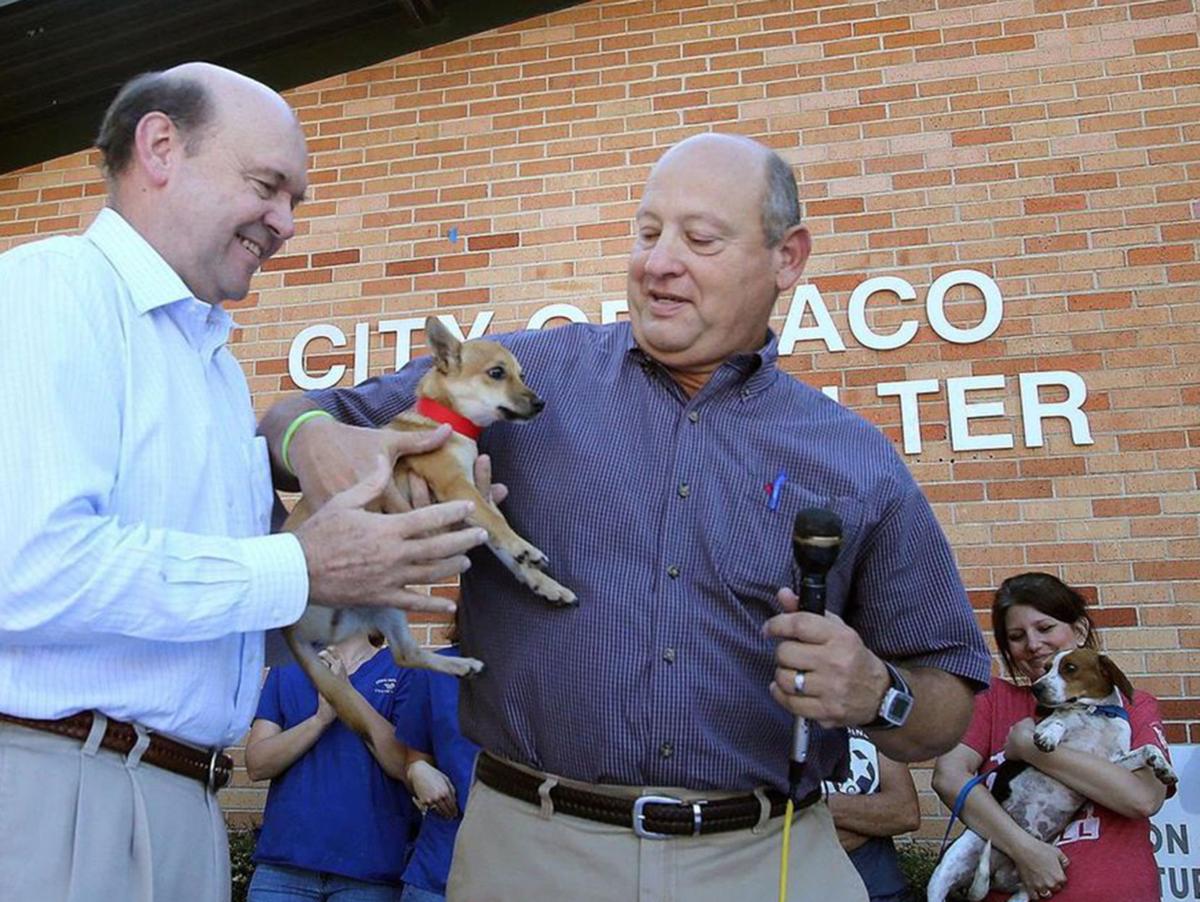 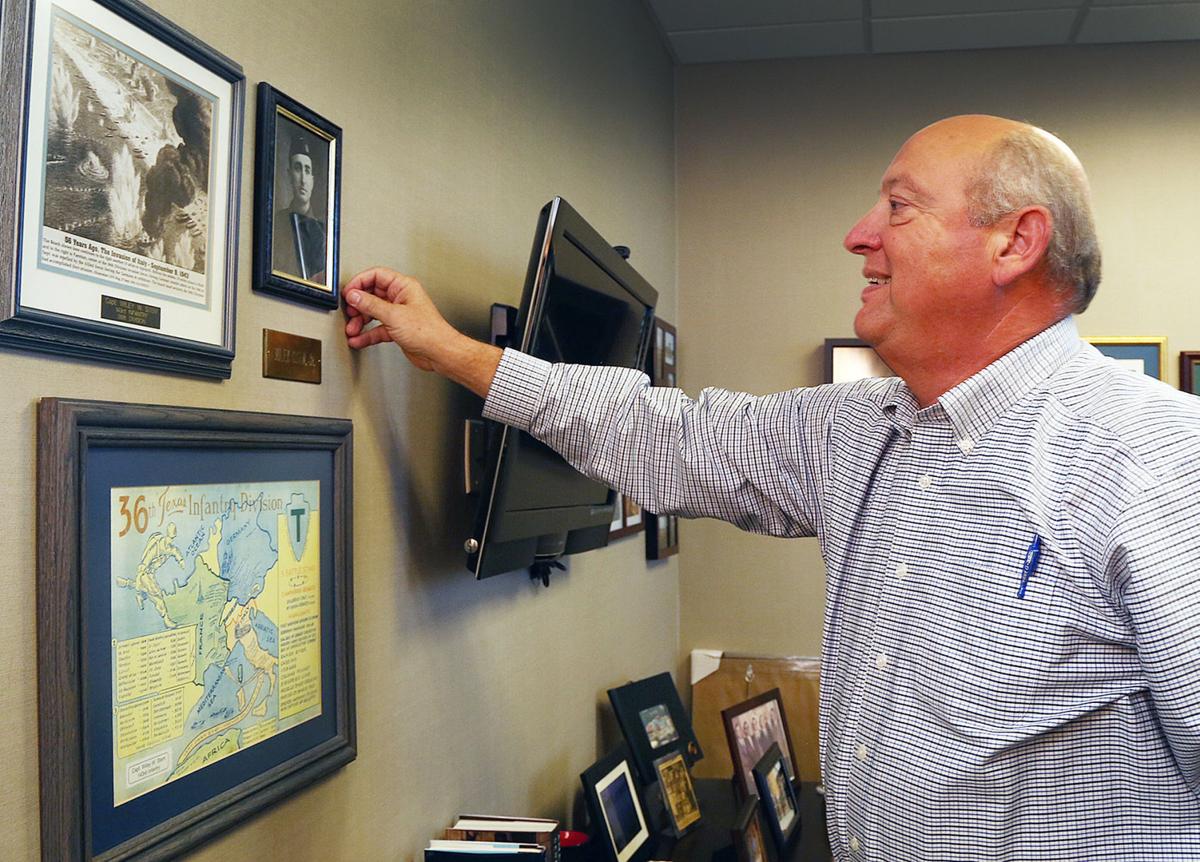 Wiley Stem III adjusts a photo of his father in this 2017 photo, taken when he was picked as the next city manager. His father, a longtime city attorney, once occupied the same office at City Hall. 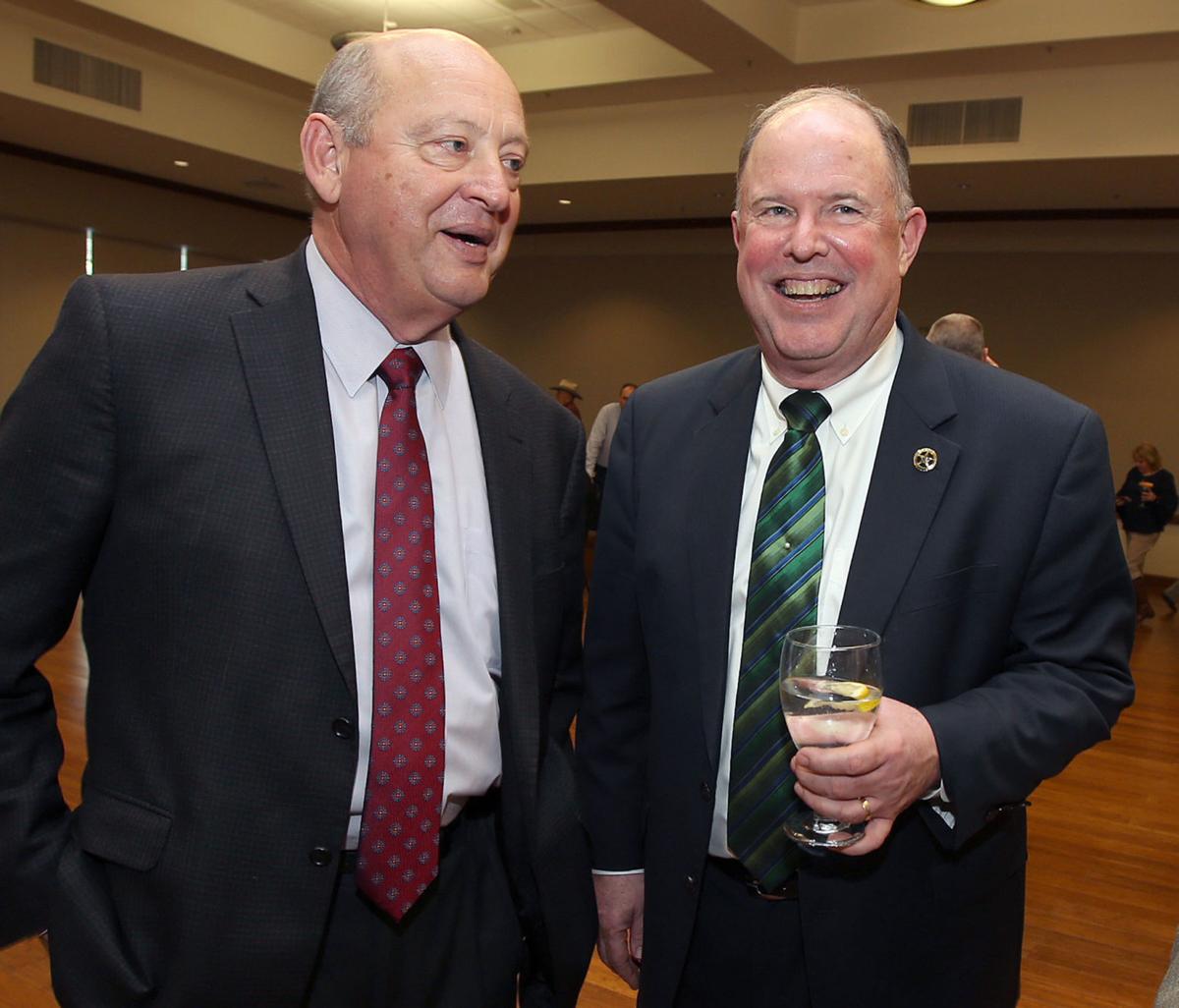 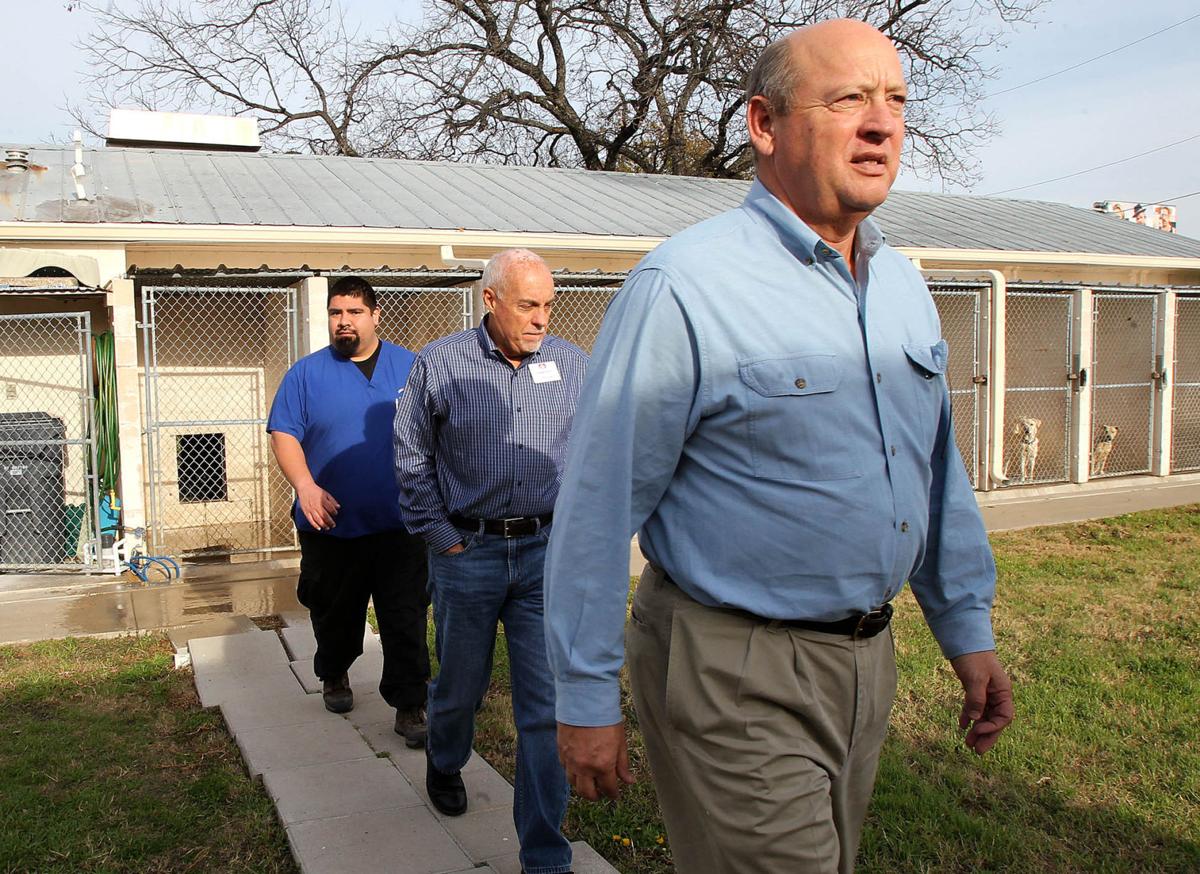 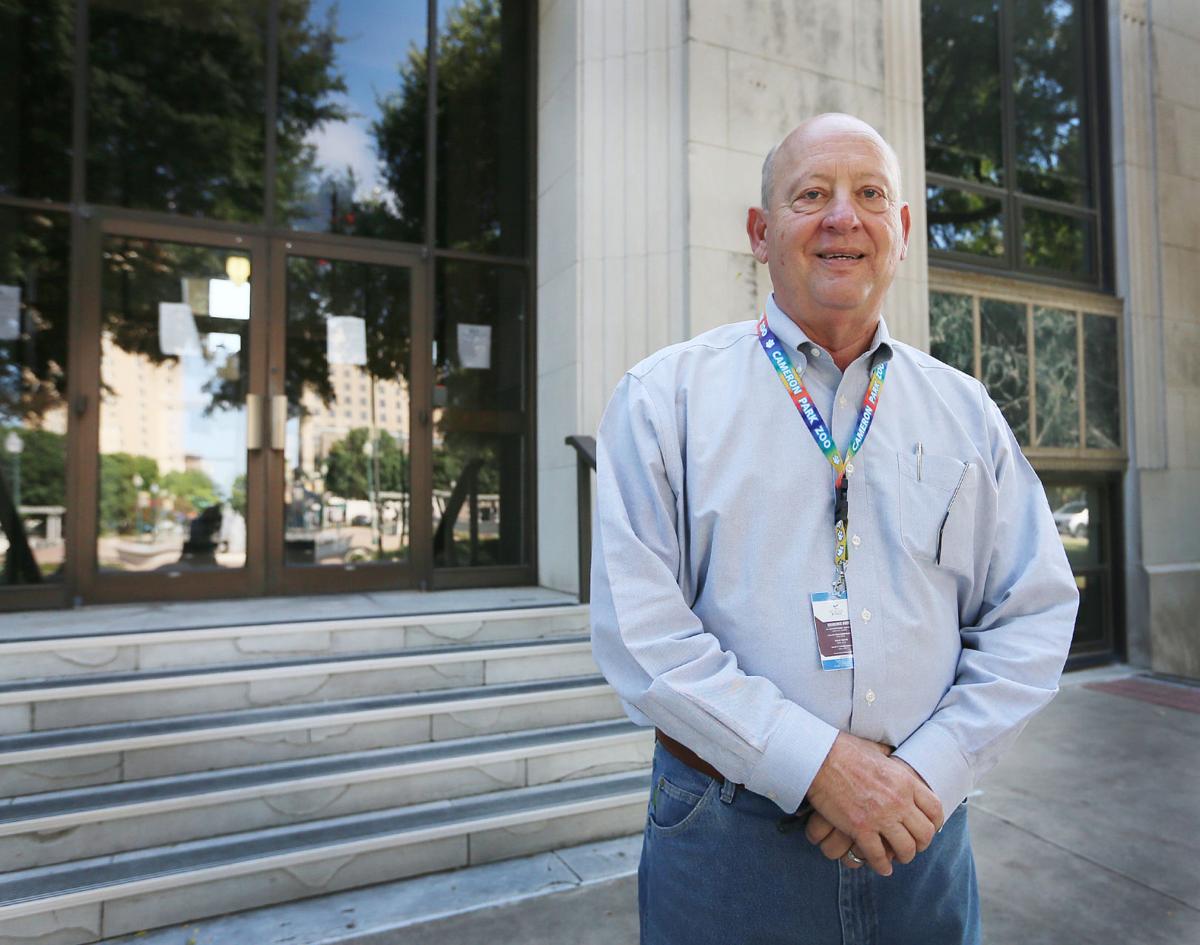 Wiley Stem III stands outside City Hall. He retired as city manager this month after 44 years with the city.

Wiley Stem III said after having a hand in nearly every major infrastructure project in Waco since the 1980s, he felt the time was right to step down at city manager.

Stem, who worked for the city of Waco for 44 years, announced his retirement during a city council meeting in May and officially stepped down this month. Over the course of his career, he helped develop the city’s street, water and wastewater improvement programs in the ’80s and ’90s and the current version of the Lake Waco Dam in 2007, led the charge to clean up the North Bosque River and helped make drastic improvements to the city’s animal shelter.

“I had hoped we’d be able to build a really strong team up there, and working with the council we’ve been able to do that,” Stem said of his former colleagues with the city. “When I saw the great team that’s up there now, it’s probably a good time for me to ease out.”

Stem literally worked his way from the ground up. He started out with a city surveying crew as a college student, returning with his degree to oversee public works and eventually becoming assistant city manager in 2000.

“I got to see all of those great things, be a part of them, and watch the people who really know how to do all of that,” Stem said.

He graduated from Baylor University with a degree in business and every intention of following that career path, but his summers on the survey crew under Director Jim Hamm, who became a good friend of his, changed his mind.

A quick look at some family members’ careers might have given him a hint.

His grandfather served as chief of detectives with the Waco Police Department, joining in 1918 and serving through the Great Depression. His father, Wiley Stem II, was the city attorney for years. His uncle, Alva Stem, served as the city’s parks recreation director, and Alva Stem Jr. worked as a city engineer for 25 years.

The leader of Stem’s survey crew, Charles Byrd, was a 25-year city employee and also left a lasting impression. Stem said Byrd in particular was “impossible to misunderstand” and had a direct way of communicating that he took with him to the city manager’s office.

Stem worked in the water department for 16 years before moving to the city manager’s office in 1999. Kathy Rice made him one of her assistant city managers in 2000, and he was promptly put in charge of a project to raise Lake Waco by several feet. The project had started in earnest in 1979, but the groundwork had been laid years before.

One late night when he was poring over contracts related to the Lake Waco project, he found one signed by his father in 1958, turning the city reservoir into a U.S. Army Corps of Engineers reservoir.

“So yeah, there was a connection,” Stem said with a laugh. “I called him and talked to him about it, and he gave me a lot of perspective. The project was already really important to me because I knew what it meant to Waco, but having a chance to visit with him about it made it much more personal for me.”

Stem said the early 2000s marked a transitional period for the city. Former City Manager James Holgersson left in 1996, and several people in the city manager’s office left with him. Melissa Vossmer was appointed to the position before resigning in 1998.

Stem worked closely with Mayor Linda Ethridge, who ran for office as the “water mayor” and oversaw everything from raising roads and parking lots to the environmental mitigation required once the project was complete.

He learned two things from Ethridge that stuck with him for the rest of his career: the concept of sustained vigilance and the saying that “politics is the art of letting someone else have your way.”

The Lake Waco project would secure the city’s water supply, but the city had been known for its terrible tasting water for decades, partially because of waste from upstream dairies along the North Bosque River. While the city was expanding its water treatment capacity, it was also locked in conflict with the dairies.

Former City Manager Larry Groth, who took over the role in 2003, said Stem’s talent for making connections and getting the right people at the table was key to getting the dairies to cooperate.

“It was obviously a big effort with city politicians and everybody else, but Wiley was the absolute central point,” Groth said. “He stayed on that, he made the right connection, built some great relationships. The dairy folks didn’t like him, because he was shining a light on some of what they were doing, but I think in the end they respected him.”

Stem, with his extensive public works knowledge, helped push for regulations to stop waste from flowing into the river and to the lake. After settling a federal lawsuit in 2006, it took two more years for them to come together to work as partners.

“We all got tired of fighting, but I think Mayor Ethridge, her resolve with the agricultural industry, the dairy industry and the state of Texas was part of it,” Stem said. “She would be the first to admit she wasn’t very popular with those folks, but she did what she had to do as mayor of Waco to protect our city and our water supply.”

“Each of them stepped up on issues that, in some cases, I’ve gotten the credit for, but in every case it would not have happened if the mayor had not been in front of me clearing the path.” Stem said. “I think the parties still hold each other at arms’ length, but we have a working relationship, and there’s some trust that’s been built there. That’s good for everybody.”

Dale Fisseler retired from the city of Fort Worth in 2011 and became Waco’s city manager two years later, after decades away from his hometown. He said Stem, who knew city departments inside and out, was the obvious choice for the deputy position.

Their paths had crossed before in Austin, and Fisseler, who had worked in Fort Worth’s water department, admired Stem’s tenacity on the North Bosque River issue. They later discover their fathers had worked together in Waco in the 1950s.

“Wiley knows pretty much everybody, not just in Waco but in the whole state,” Fisseler said. “It’s really weird. I thought I knew a lot of people in Waco, but he knows people in Austin and Washington, D.C. He can always call somebody to help us get something done.”

Fisseler said city governments have to always consider the long-term, especially in issues involving utilities, and Stem had a hand in nearly every major project during his time with the city.

“He never stepped away from a big project because it was complicated or politically charged,” Fisseler said. “He was always thinking 20 or 30 years ahead.”

An issue tackled by one of the city’s more recent projects had left Waco with a measure of infamy in some circles. When Stem traveled to other city animal shelters, the reputation of Waco’s then-crowded shelter and high kill rate preceded him.

Reporting back to Mayor Malcolm Duncan Jr., the two were motivated to improve the situation. Duncan said in the 1980s, when his father served on the city council and his mother served on the local Humane Society board, the then city-run animal shelter was a constant source of disappointment. The Humane Society assumed control for the next 20 years, but growth in and around the city meant that the number of strays and surrendered animals eventually overwhelmed their resources. By the early 2000s, the kill rate was between 80% and 90%.

“The whole approach to animal welfare was done as animal control, under the auspices of the police department,” Duncan said. “That was just a very unhealthy situation, and by and large all cities in the county did it that way.”

Under a new agreement with the Central Texas Humane Society, Animal Birth Control Clinic and various other county animal rescue organizations, the city assumed control of the shelter once again in late 2012, and the Humane Society assumed control of fundraising and shifted its focus to adoptions. Their efforts paid off in two years, and the city increased its investment into the shelter.

“We had never approached it as a collaborate effort before, and Wiley built partnerships with all of those different agencies,” Duncan said. “There were all these different interest groups that were not working together, and Wiley took the time to meet with all of them, understand what their goals were and how we each had a role to play.”

The shelter in recent years has maintained a “no-kill” status, and Stem said he intends to do his part to keep it running as it should, city manager title or no.

“I’ll never be too busy to be involved with that, just because I know what happens when a community disengages from that,” Stem said. “It could go back to the way it used to be, but we can’t allow that to happen.”

Stem and his wife, Tonette, got into the habit of adopting older dogs from the shelter, giving them a home in the country at their family farm in their final years. At one time, they had as many as six.

“I think in 44 years, being as experienced as he was in every different department, he had a ground-level understanding of public works municipal operations that’s going to be hard to duplicate,” Duncan said. “It’s a tremendous bank of knowledge and experience that led him to be so successful.”

Wiley Stem III started working on a city survey crew when he was a college student and retired as city manager earlier this month, after a 44-year career.

Wiley Stem III adjusts a photo of his father in this 2017 photo, taken when he was picked as the next city manager. His father, a longtime city attorney, once occupied the same office at City Hall.

Wiley Stem III stands outside City Hall. He retired as city manager this month after 44 years with the city.