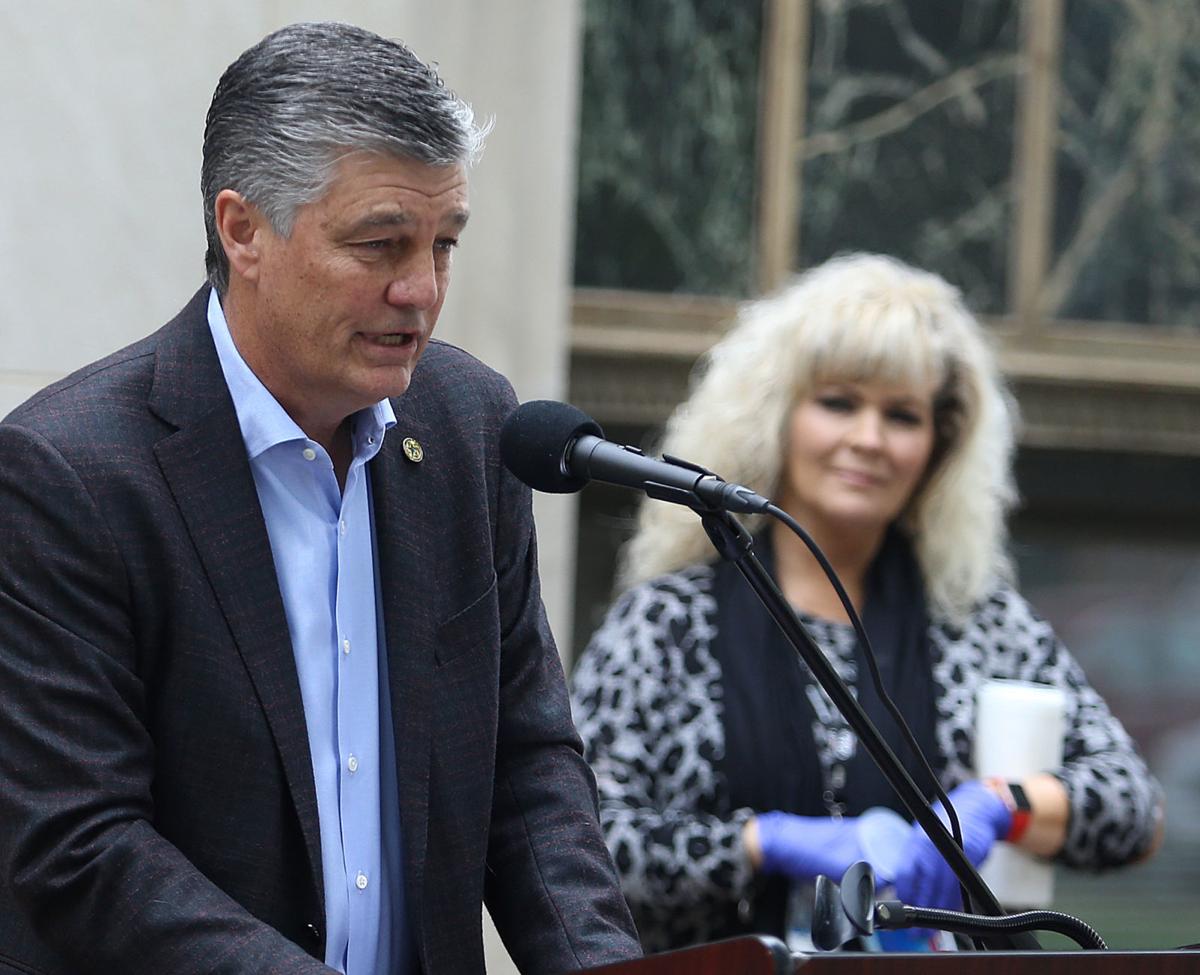 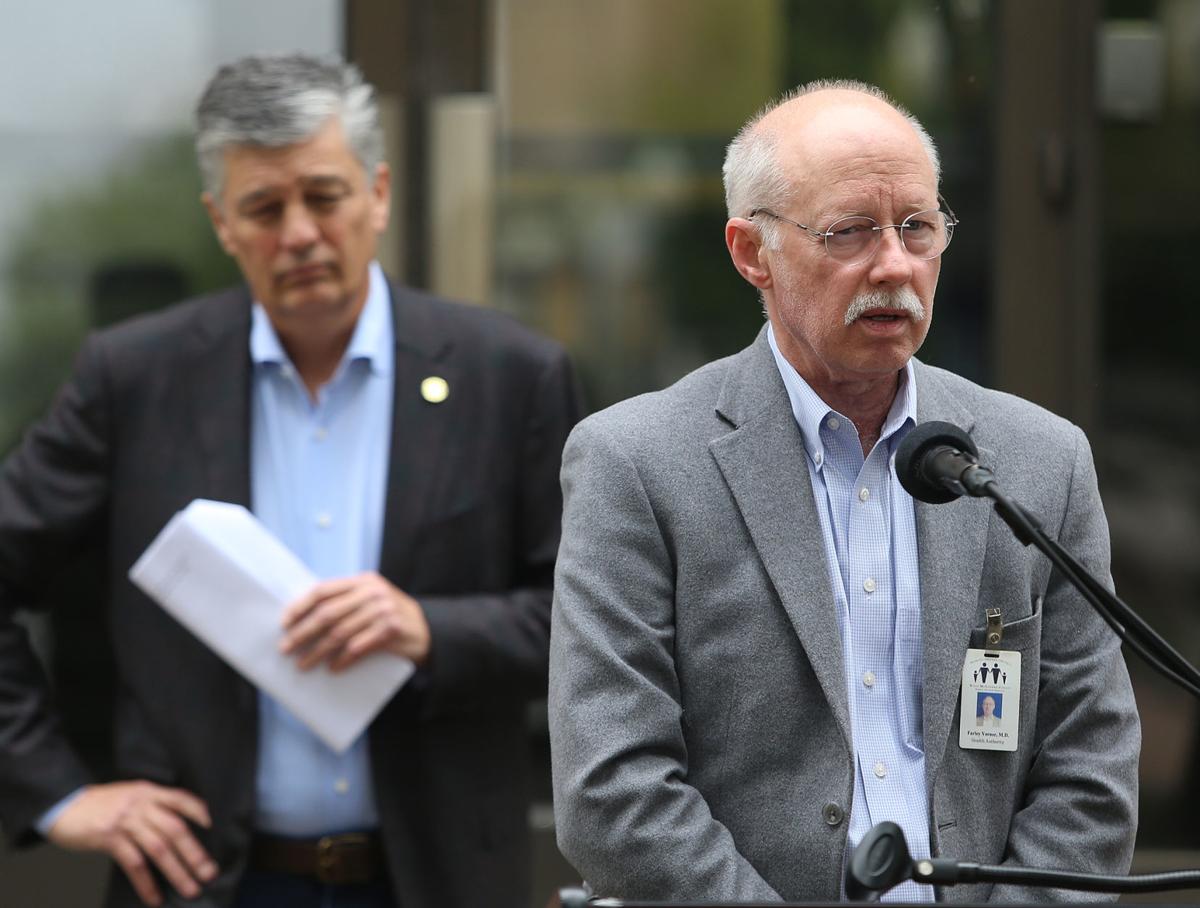 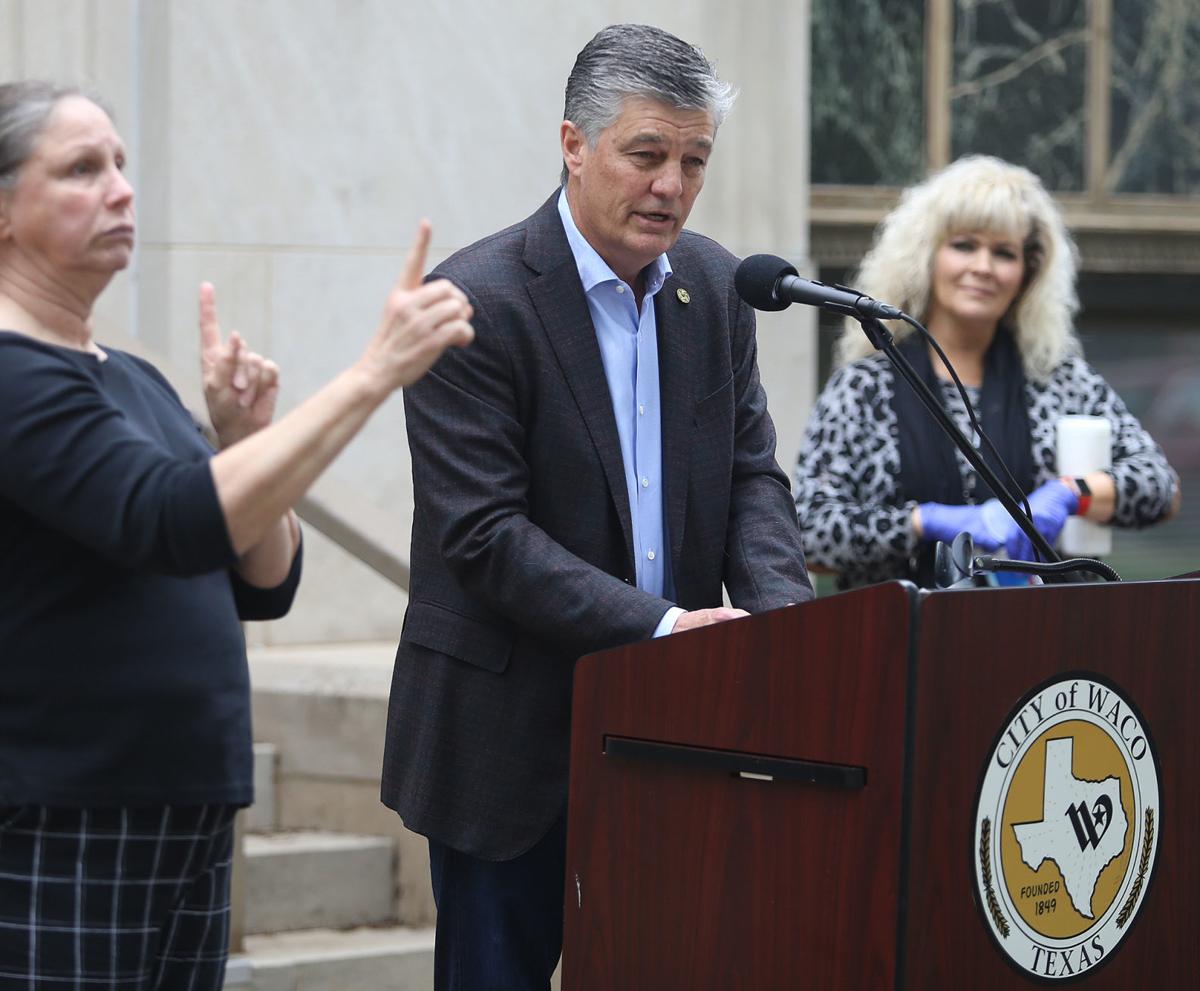 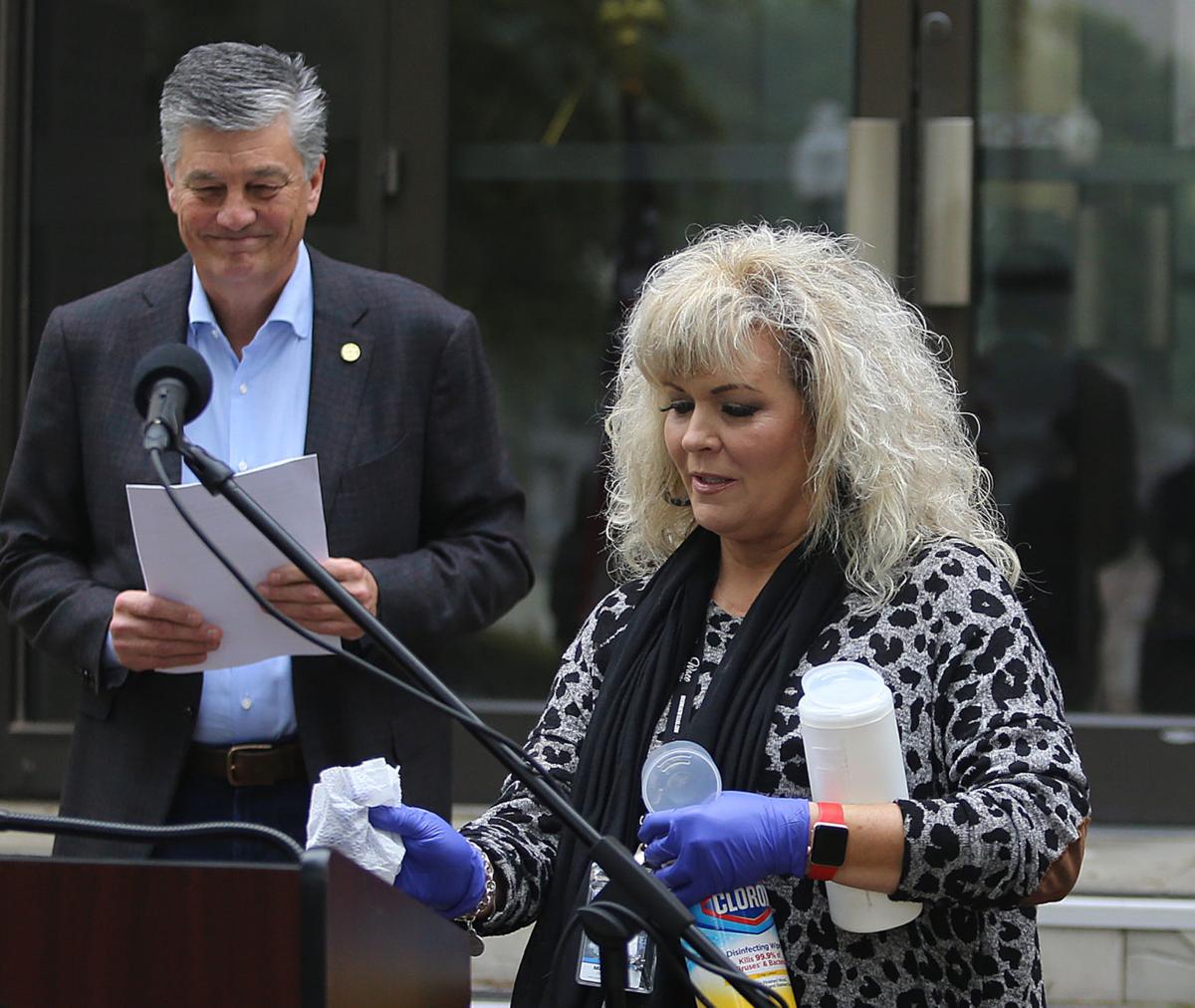 Michele Bean, Administrative Specialist at City of Waco wipes down the podium before Mayor Kyle Deaver addresses the media.

Waco Mayor Kyle Deaver on Monday followed the lead of Dallas County in ordering Waco residents to shelter in place during the coronavirus pandemic, requiring them to stay home except for activities deemed essential.

Texas had reported at least 352 cases of COVID-19 as of Monday at noon, including the first confirmed case in Falls County, and eight deaths related to the disease caused by the new coronavirus.

Under the Waco and McLennan County orders, residents may only leave home for three reasons, while maintaining a 6-foot distance from other people. Those reasons are:

Among businesses that closed will be hair and nail salons, barbershops and clothing stores.

The shelter-in-place order comes almost a week after Deaver declared a state of local disaster and public health emergency for Waco on March 17 that closed bars and in-restaurant dining, as well as gyms, pool halls, bowling alleys and similar spaces.

Restaurants may remain open only for takeout and delivery meals. All travel is banned except to work and for crucial errands, and all public and social gatherings are prohibited with a few narrow exceptions in which social distancing must be practiced.

The order also requires all public, private and commercial labs in Waco that perform COVID-19 testing to report the number of tests performed, including the number of positive tests, to the health district by 5 p.m. each day.

Violation of the order will result in a Class C misdemeanor citation, which could include a fine up to $1,000. The order is effective for seven days, but the Waco City Council meets in an online format at 9 a.m. Tuesday and will consider extending it to April 7.

Deaver said he was disappointed that Gov. Greg Abbott stopped short of instituting such measures during his news conference Sunday, although he noted that Abbott encouraged cities to take such steps. Dallas County instituted a similar order Sunday.

“It is important to implement these measures over as broad a geographic region as possible because of the very nature of an infectious disease pandemic,” Deaver said, adding that McLennan County has a higher per capita rate of confirmed COVID-19 cases than Dallas County.

“I know many will say that we are taking this action too early,” he said. “I have been convinced by the health care officials, including our local health experts, that it is more important to act early than to wait. This action is inevitable, and the sooner we take it the better chance we have of getting ahead of this.”

Additionally, Deaver urged people to observe grocery store item purchase limits so everyone has the supplies they need and for only one member of the household to go to the store at a time to help maintain social distancing and to prevent the spread of disease.

He also said anyone who needs to use wireless internet, to file for unemployment benefits for example, can access WiFi in all Waco library parking lots and the Waco Convention Center parking lot from 7 a.m. to 10:30 p.m.

Waco city parks will remain open, but public restrooms will be locked and other coronavirus control measures, such as social distancing and no gatherings of more than 10 people, will be in place, city parks officials said.

“Get out and enjoy our great parks,” Deaver said in the announcement Monday. “Use this time to create special memories with your families.”

Camping has been closed at Lake Waco parks with reservations for dates through May 15 being cancelled.

In Dallas County, residents were ordered Sunday to stay in their homes except for crucial work and errands, and officials there urged leaders of other counties to enact the same measures, the Dallas Morning News reported.

At a press conference Sunday, Gov. Greg Abbott declined to issue orders for Texas residents to shelter in place, saying he wanted to see the effectiveness of his recent executive order that temporarily closed schools and banned gatherings of more than 10 people before taking stricter measures. He also noted that some areas of the state had not seen many COVID-19 cases and that the actions needed in one area to slow the spread of disease may not be necessary elsewhere.

“At this time, it is not the appropriate approach to mandate that same strict standard across every area of the state, especially at a time when we are yet to see the results coming out of my most recent executive order,” Abbott said. “That said, as I have said before, I will always remain flexible.”

In related news, Mexia Independent School District notified families Sunday that a Mexia High School band trip sponsor had tested positive for COVID-19, Superintendent Lyle DuBus said. The sponsor does not live in Mexia and has returned to his home outside of Limestone County. DuBus recommended anyone with symptoms of fever, cough and difficulty breathing should call their health care provider for instructions.

Anyone experiencing fever, cough and difficulty breathing should call or visit their healthcare provider’s website first for screening. Ascension Providence, Baylor Scott & White and the Waco Family Health Center have online screening forms for COVID-19 and will accept new patients and people without insurance. Testing must be ordered by a physician and sent to a lab.

What sheltering in place means for Waco residents:

Carl Hoover and Tommy Witherspoon contributed to this report.

What does Waco's ‘shelter in place’ order actually mean for residents?

Waco and McLennan County officials on Monday ordered local residents to shelter in place during the coronavirus pandemic, requiring them to st…

Michele Bean, Administrative Specialist at City of Waco wipes down the podium before Mayor Kyle Deaver addresses the media.