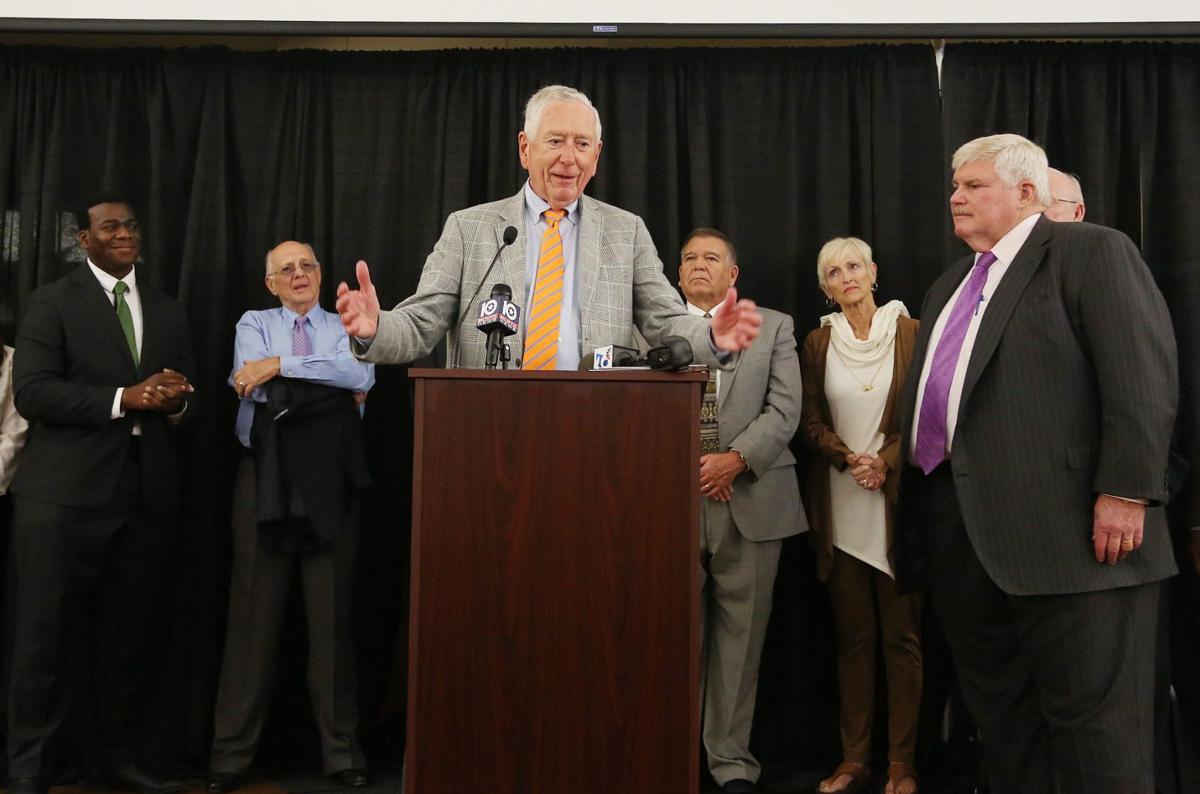 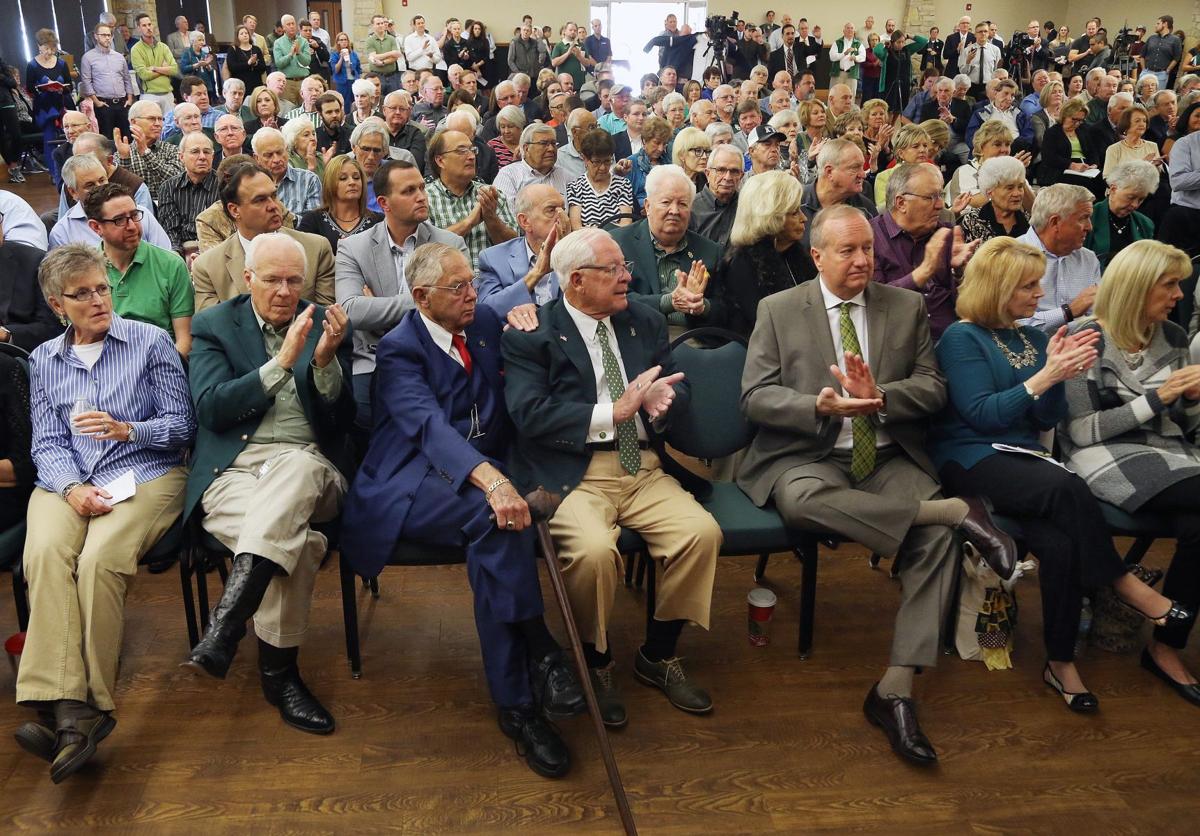 About 650 people attended a press conference Thursday morning held by a newly formed group of major donors demanding reform from the school’s board of regents. About 650 filled the meeting room at the Texas Ranger Hall of Fame and Museum, museum officials said. 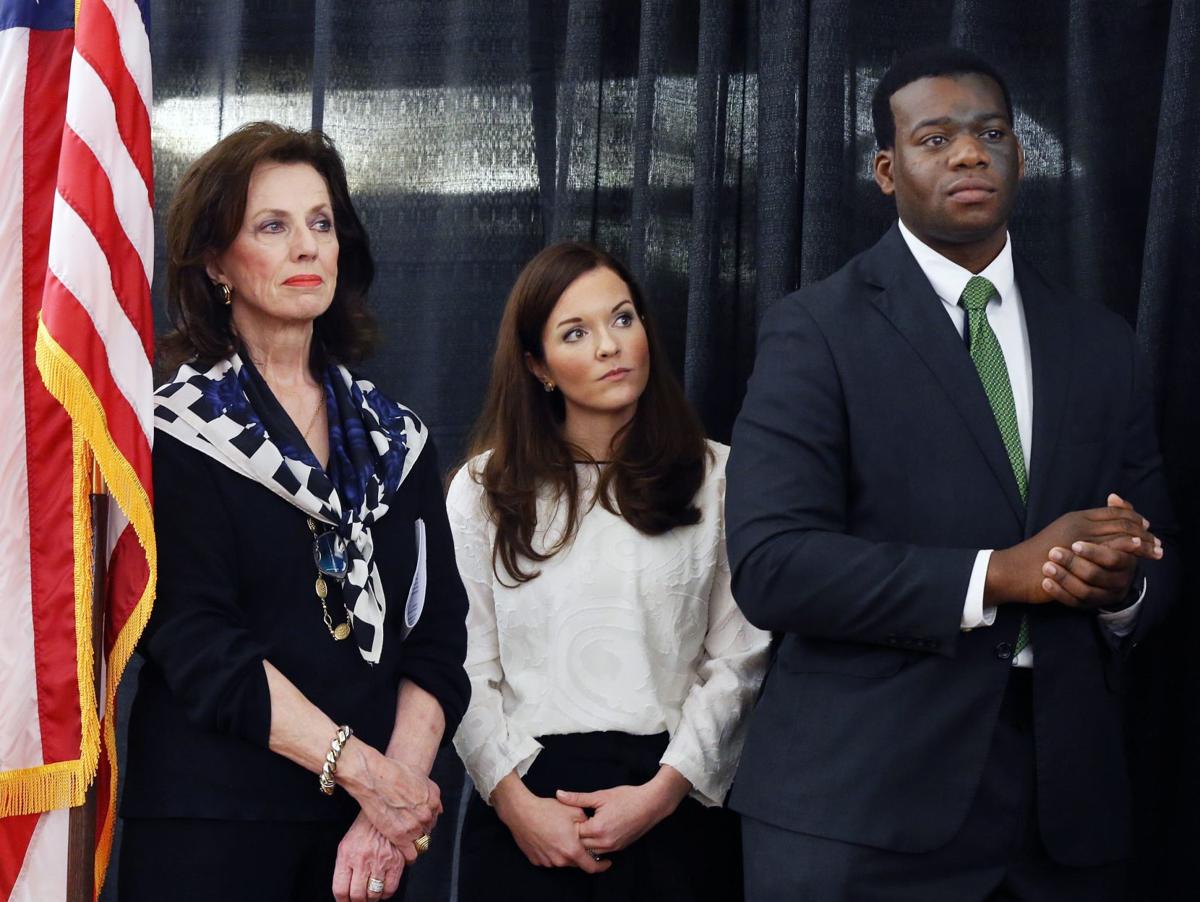 Former regent Emily Tinsley (left); Liza Firmin (center), a Baylor Law School alumna and financial planner; and James Nortey, an alumnus and Austin attorney, stand with other supporters who gathered for a press conference Thursday to demand reform from the Baylor University Board of Regents in response to the school’s sexual assault scandal. 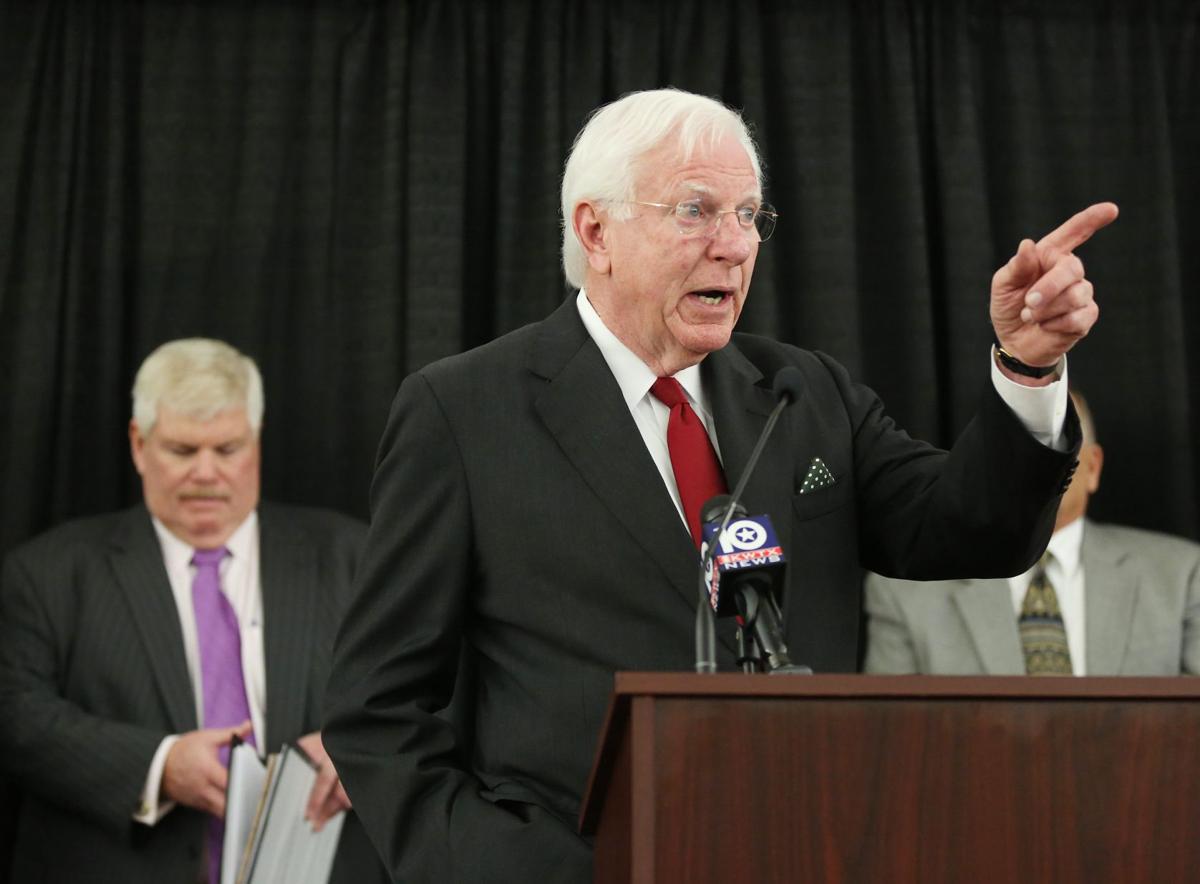 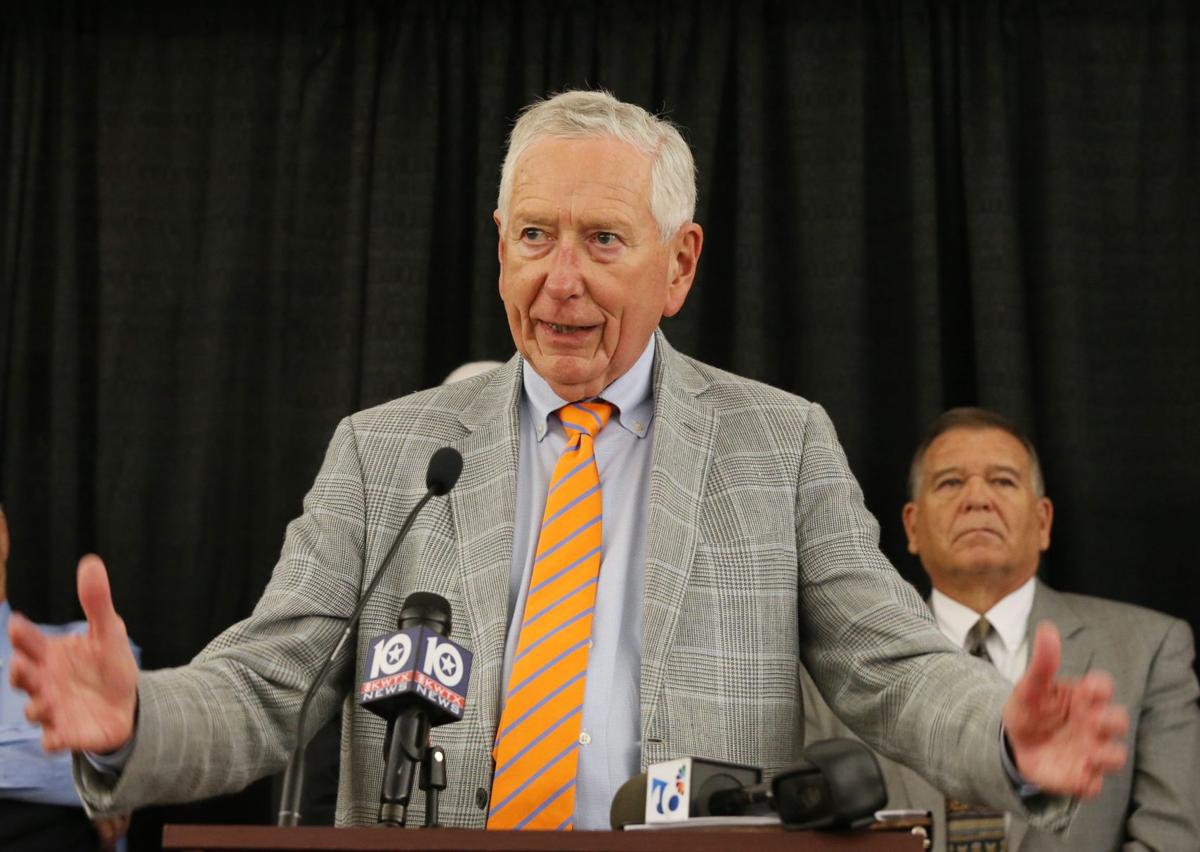 Temple businessman and Regent Emeritus Drayton McLane, namesake for Baylor University’s $266 million riverside football stadium, speaks to a group gathered for a press conference Thursday to demand reform from the school’s board of regents in response to the school’s sexual assault scandal. 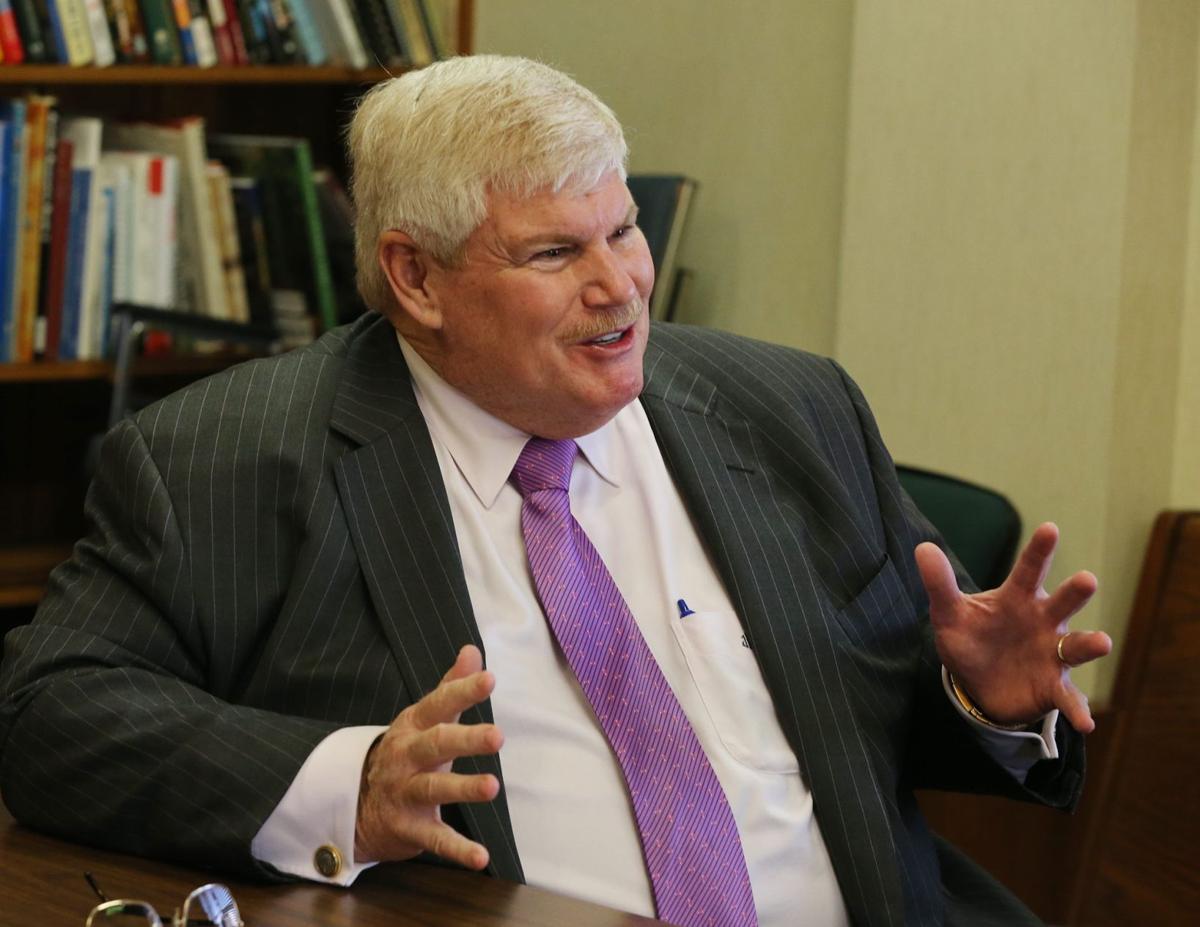 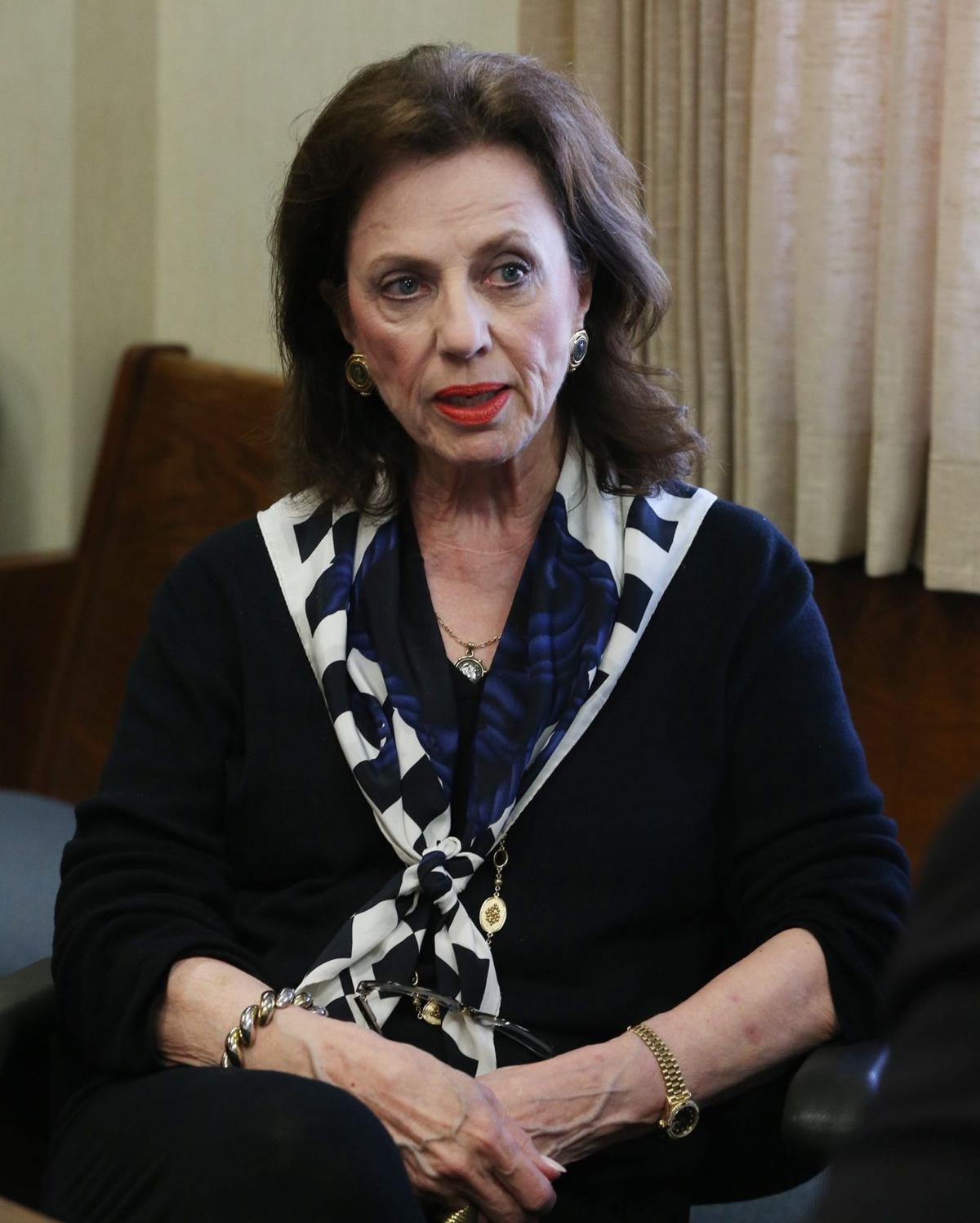 A group of major Baylor University donors on Thursday demanded transparency from the school’s embattled regents, saying the board is tone-deaf to its constituents and some members likely need to be removed.

The lack of clarity regarding the board’s role in the sexual assault crisis that has gripped the school for more than a year is also severely damaging donors’ relationships with the school, costing it tens of millions of dollars, according to leaders of the group dubbed “Bears for Leadership Reform.”

“It would be unbelievable to me that the board would ignore this voice,” said John Eddie Williams, a Baylor alumnus and Houston lawyer whose name adorns Baylor’s football field and law school library. “It was important to me when we put this group together that we had the right critical mass.”

Williams, White and Tinsley spoke with the Tribune-Herald later Thursday, offering specifics of some of the missteps they think the board has made and what they would like to see from the board moving forward.

Regents already have plans to adopt changes similar to the Bears for Leadership Reform recommendations, and the board has retained two governance experts to start the process, regent Chairman Ron Murff said in an emailed statement Thursday night. Murff did not return a phone message seeking an interview.

Williams said a group of donors was rebuffed after requesting a summer meeting with the full board, but they sat down with a small group of regents.

“Back in June, four major donors asked to meet with the board,” Williams said. “Collectively in that group, there was probably $100 million in commitments and giving, a group that you would know every one of them. We asked, ‘What’s going on?’ and all we were told was, ‘Well, you don’t know what we know. Trust us.’ The answer from our side was, ‘Why should we trust you?’

“After that meeting, I have not heard a word from a board member.”

Williams said he needs to know the facts in order to make a decision on whether specific regents should not be on the board, but he believes resignations are needed.

“It would be my guess that, yes, the resignation of some regents would be necessary to regain the confidence and trust of the Baylor family,” Williams said. “There are some very fine people on that board. Until we see the facts and see some other things about who was in charge of what, it’s hard to tell.”

Williams said he is not seeking legal remedies to remove board members, only public support to pressure regents to speak candidly to the Baylor community.

In May, regents fired Ken Starr as president and Art Briles as head football coach after the board reported a “fundamental failure” in Baylor’s Title IX implementation. Ian McCaw resigned days later as athletics director, and Starr has since resigned from his other positions at Baylor.

Williams told the Tribune-Herald he is unsure if he will withhold donations himself, but he knows some who already have.

“I know of somebody that wrote Baylor out of their will as a result of this,” he said. “And the amount was $25 million.”

“This is the most difficult day Baylor University has ever had in its existence,” White told the Trib. “Never before has Baylor University been threatened with the question of its integrity, and that, to me, is the most important thing. One thing you can’t get back is your reputation. Tough to do for a person or an institution. They have let this occur.”

McLane, the namesake of Baylor’s McLane Stadium, received a hearty ovation at the morning meeting.

“I agree with what John Eddie and everyone’s been saying,” McLane said to the crowd. “We need to determine what are the real facts. I think the real position is, were the right decisions made by the board?”

Current regents did not attend the meeting, but in a message on Baylor’s website, Murff said the recent weeks and months have been trying, and emotions are running high.

“Rather than stay silent, the university’s senior leadership recognized that the Baylor family deserved to know more about the magnitude of the problem and about the reasons why we responded so forcefully to the Pepper Hamilton findings,” Murff wrote. “As a result, we decided to be more forthcoming about what we learned while always being mindful of the victims of sexual assault, particularly maintaining their confidentiality. As we anticipated, the information profoundly shocked and saddened the Baylor family, as it did us when we first heard it.”

Baylor has spent $4.3 million on services for sexual assault victims since November 2014, the university has said, including a $2.2 million Title IX office budget, which has increased in each of the last three years.

Patty Crawford resigned as Baylor’s Title IX coordinator last month, then waged a public battle with the university regarding her resources and support.

“This task force will be a part of an important governance review that has been done on a regular basis for the past several years,” Murff said in the statement. “We want to ensure we continue to take positive steps in fulfilling our fiduciary responsibilities and in doing our best for Baylor.”

The university also published a memo from J. Cary Gray, a Baylor regent and chairman of the board’s Governance and Compensation Committee. The memo outlines steps the board has taken to implement Pepper Hamilton’s recommendations specific to the board. It lists descriptions of trainings and studies of best practices, along with the elimination of the board’s athletics committee and formation of an executive committee.

“Well, I promise you that announcement wouldn’t have come out yesterday if it wasn’t for this meeting today,” White said at the meeting.

Releasing the board’s rules, the votes of each member and the meeting minutes would be a good first step toward transparency, Williams said.

Williams said because Pepper Hamilton delivered an oral report to regents, there are more than 30 versions of the report, referring to the number of regents on the board.

“The first step is, let’s see what the board saw and let’s protect the victims, absolutely protect them,” he said in the Tribune-Herald interview. “How can we even determine if it was done accurately? I don’t know. I question it because it’s secretive. . . . It is a culture of secrecy that I don’t think serves the Baylor family well.”

Baylor’s board has a structure similar to other private universities’ boards, and trying to model best practices should be easy, Tinsley said.

“There are plenty of ways for them to learn how to do their job and be successful and more effective,” Tinsley said.

The new group has almost 9,000 Facebook “likes” and financial support, she said.

“There’s a crying out that’s indicative of a great need,” Tinsley said. “I’ve seen (board governance) done well, and it’s not that hard.”

The current board is filled with good people, but their handling of this situation has fallen short, White said.

“These (regents) are individually quite good,” White said. “They all want to do the right thing for Baylor. I’m not here to question their desire for the right goal. It’s the way they’ve gone about it that I think is flawed. . . . The point here is they’ve circled the wagons, closed the doors, put on gag orders to all the board members so they can’t talk to anybody. They have one spokesman, and he doesn’t talk to anybody, so nobody hears anything, and then they run from you when you try to get a statement. That’s not good.”

Forcing Baylor University regents into the sunlight: Q&A with Bears for Leadership Reform

Discussing the group’s aims and goals, as well as the contempt and indifference with which they say they’ve been greeted by Baylor regents.

In the increasingly antagonistic jockeying and jousting between the Baylor University Board of Regents and the donor-led, alumni-infused Bears…

Baylor University’s board of regents will publicize agendas and minutes for all future quarterly meetings, Chairman Ron Murff said Tuesday.

DALLAS — A group of major Baylor University donors has called for an investigation of the conduct of the school’s board of regents and administration in a sexual assault scandal that has shaken the community.

Baylor University regents voted unanimously against another investigation into the school’s sexual assault scandal on Sunday, which influentia…

Baylor University’s sexual assault scandal could cost the school at least $223 million, according to “Bears for Leadership Reform,” a group of…

Open meetings, press availability and a dramatically restructured board are among the latest demands for Baylor University regents from the “Bears for Leadership Reform” group.

About 650 people attended a press conference Thursday morning held by a newly formed group of major donors demanding reform from the school’s board of regents. About 650 filled the meeting room at the Texas Ranger Hall of Fame and Museum, museum officials said.

Former regent Emily Tinsley (left); Liza Firmin (center), a Baylor Law School alumna and financial planner; and James Nortey, an alumnus and Austin attorney, stand with other supporters who gathered for a press conference Thursday to demand reform from the Baylor University Board of Regents in response to the school’s sexual assault scandal.

Temple businessman and Regent Emeritus Drayton McLane, namesake for Baylor University’s $266 million riverside football stadium, speaks to a group gathered for a press conference Thursday to demand reform from the school’s board of regents in response to the school’s sexual assault scandal.