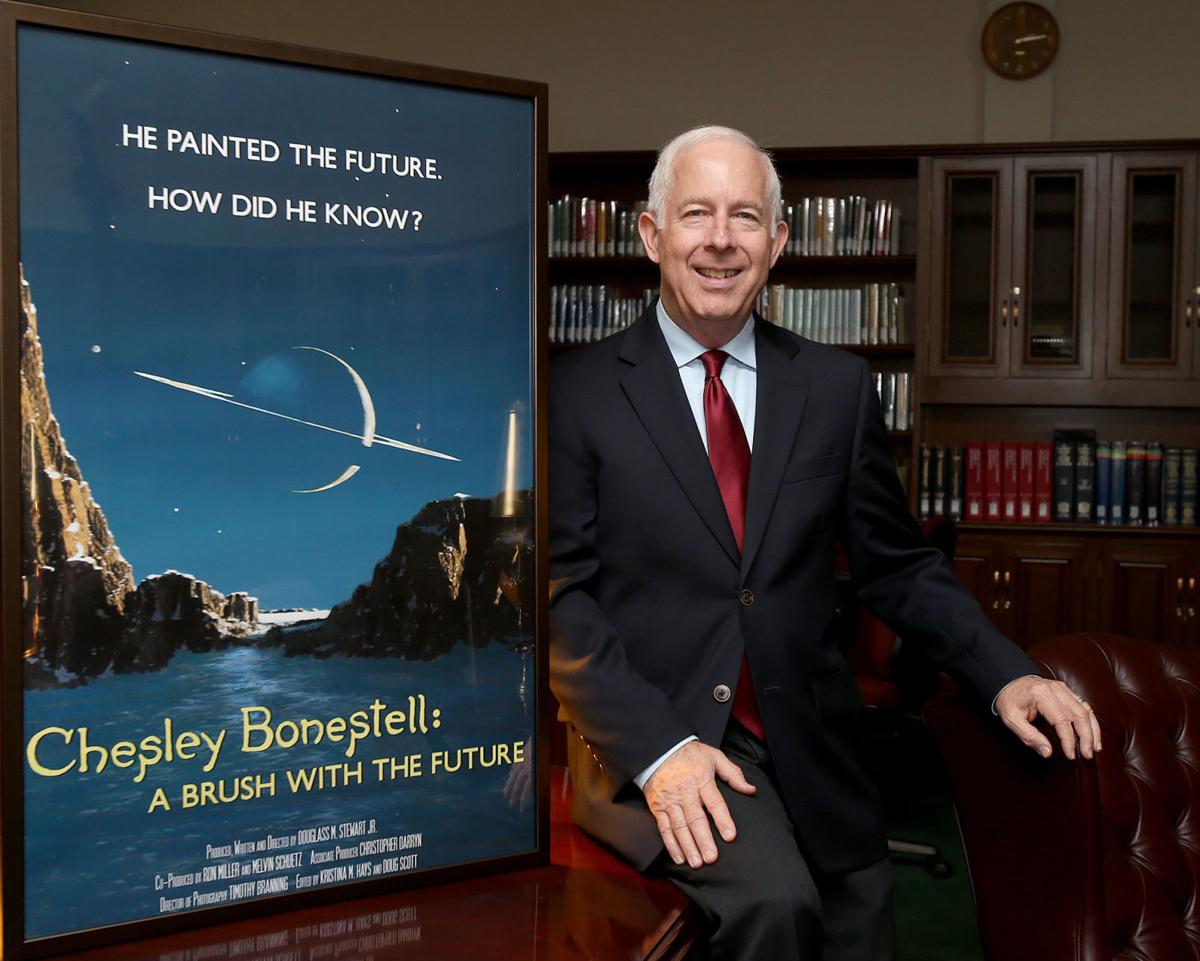 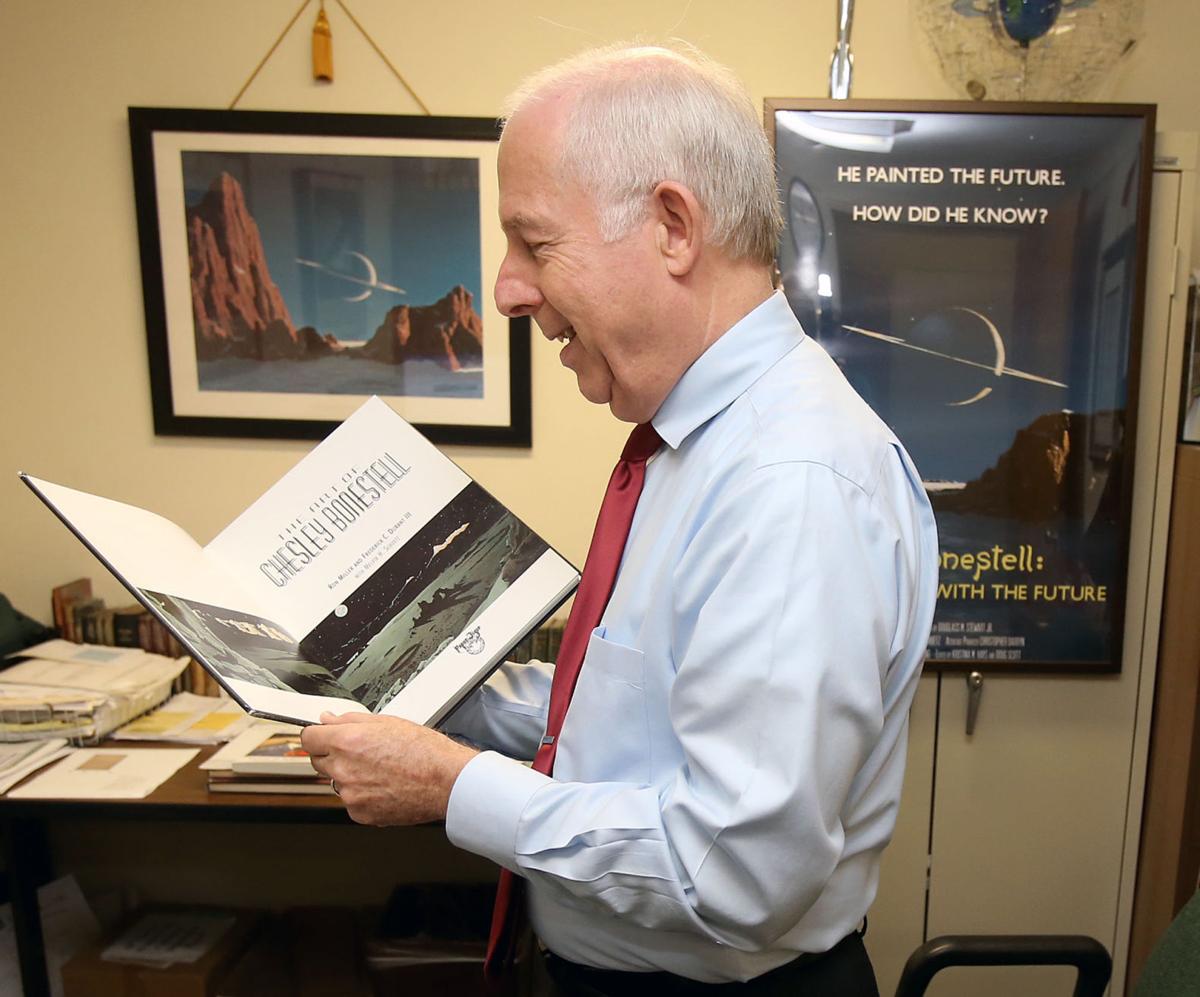 Armstrong Browning Library assistant to the curators Melvin Schuetz, who co-produced an award-winning documentary on space artist Chesley Bonestell, looks at a book on Bonestell that Schuetz collaborated on. 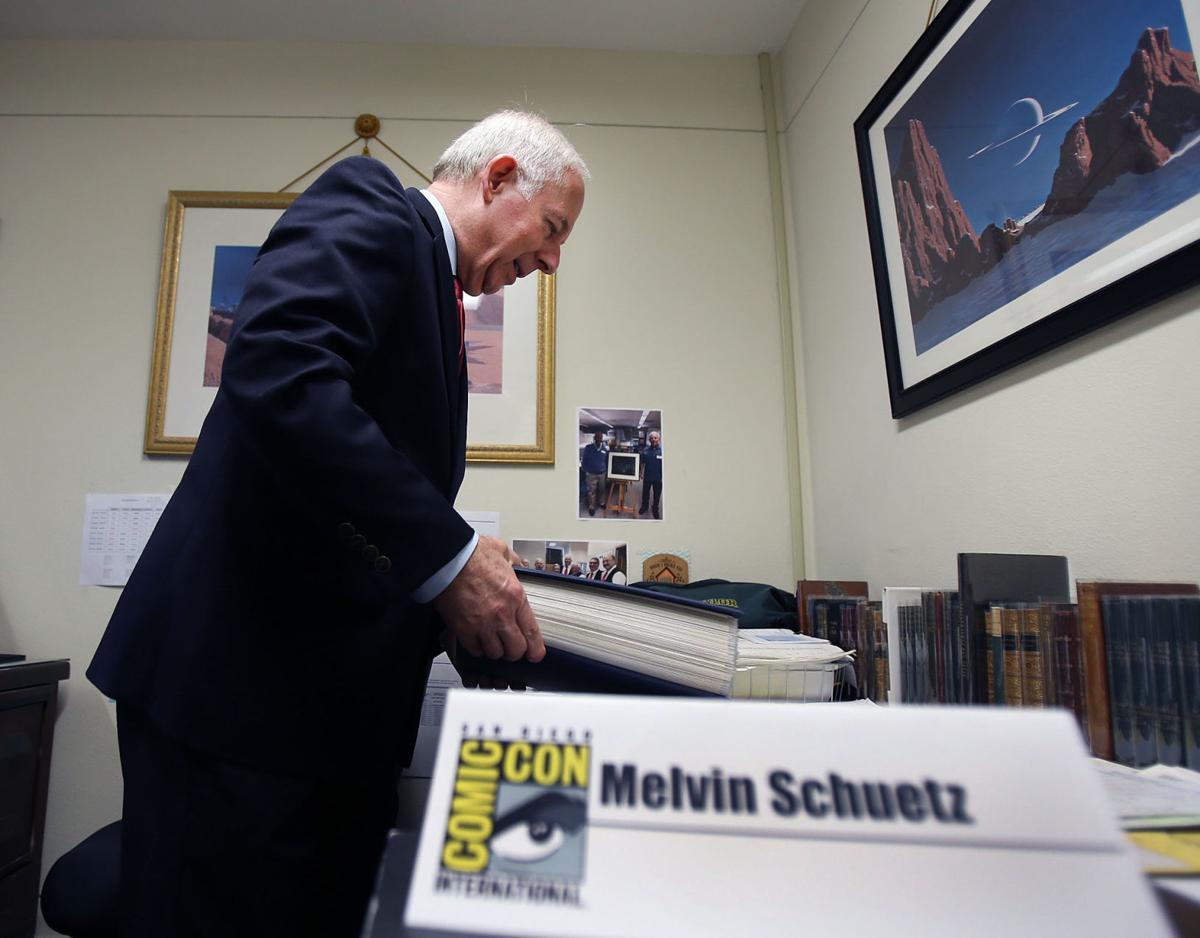 Melvin Schuetz quips that he has one foot in the past and the other in the future.

The foot in the past refers to his work as assistant to the curators at Baylor University’s Armstrong Browning Library, where he keeps track of the use of the library’s world-renowned collection of 19th-century Browningiana, material pertaining to British poets Elizabeth Barrett Browning and Robert Browning. He also scours the internet for rare books and letters that the Baylor library might want to acquire.

The foot in the future, or rather, the futuristic, is a lifelong interest in the space art of American designer and artist Chesley Bonestell, whose imaginative planetary vistas of the 1940s and ’50s seeded the dreams of America’s first generation in space.

Schuetz’s contribution in the latter recently earned recognition in the present as ”Chesley Bonestell: A Brush With The Future,” a film on which he served as a co-producer, won Best Documentary honors at this year’s Comic-Con International Independent Film Festival in San Diego.

It was the latest recognition of the space artist whose vistas in a book on space exploration transfixed Schuetz when a third-grader in 1960. That interest in space led Schuetz, now 67, to 10 years with the U.S. Air Force where he monitored military satellites. It also steered him on an informal lifelong quest to track down Bonestell’s prolific output of space art.

Bonestell, born in San Francisco in 1888, started in architecture, where his illustration skills created conceptual sketches for New York City’s Chrysler Building and San Francisco’s Golden Gate Bridge. A stint in Hollywood followed, with Bonestell creating matte background paintings for movies including “Citizen Kane” and “The Hunchback of Notre Dame.”

The work for which Bonestell became best known came in the 1940s and 1950s with his magazine and book illustrations of space scenes, bold imaginings of the surfaces of the moon, Mars, Venus and planetary moons as well as depictions of what human space exploration might look like. His most famous painting, 1944’s “Saturn As Seen From Titan,” has been called “the painting that launched a thousand careers.”

Schuetz’s interest in the space artist continued through a career that included stints with the Air Force, Hughes Aircraft Company, a year as technical adviser for the Fort Worth Museum of Science and History’s blockbuster 1991 “Soviet Space” exhibit and 24 years with Baylor libraries, the last nine of which with the Armstrong Browning Library.

He started to track down Bonestell’s space art, clipping images from books and magazine and dutifully recording where copies of those images could be found. Over the years, that documentation grew to hundreds of images filling ten large ring binders — the raw material Schuetz used to compile his 1999 book “A Chesley Bonestell Space Art Chronology.”

His exhaustive knowledge of Bonestell’s space art soon brought him to the attention of former Bonestell business manager and agent Fred Durant III and space illustrator and writer Ron Miller, who had been doing their own exploration of Bonestell and tracking his other work as well as his space illustrations. Miller, like Schuetz, had found Bonestell’s paintings career-shaping.

“I wanted to be a scientist, but you had to be good at math,” Miller said.

The three ended up collaborating on “The Art Of Chesley Bonestell,” a glossy coffee table book of the artist’s paintings and illustrations. Miller said Schuetz’s research, detailed fact-checking and discovery of rights holders proved essential.

“We sent it all to Melvin for fact-checking because that’s what he does best,” he said.

Their book, in turn, helped persuade California filmmaker Douglass Stewart Jr. a documentary on Bonestell was needed, and in 2014 he started on one with Schuetz’s and Miller’s blessing.

Stewart, who financed the film, found Schuetz “a walking encyclopedia of Chesley Bonestell.”

“He was an absolute godsend to the film, very thorough in his research,” Stewart said.

Stewart said Schuetz not only found the correct rights-holders for many of the illustrations seen in the movie, but discovered scores of paintings and illustrations Steward had not known about.

It took Stewart, with Miller and Schuetz on board as co-producers, three years to complete the documentary, which debuted this spring before a sold-out audience at the Newport Beach Film Festival.

The film not only captures Bonestell and his space art, but its context of the early decades of the Space Age, now roughly a half-century old.

“It’s a slice of American history about a forgotten America,” Stewart said.

Response at the Newport festival and subsequent screenings led to the documentary’s selection for the Comic-Con International Film Festival — a selection that was thrilling enough on its own, Stewart said.

“It was an incredible honor to be chosen to have the film screened at Comic-Con,” he said.

The screening also featured a panel discussion that included Stewart, Schuetz and iconic film special effects designer Douglas Trumbull, who spoke of how Bonestell’s illustrations shaped several of “2001: A Space Odyssey’s” scenes, particularly those on the lunar surface.

Topping the film’s screening was its win as the festival’s Best Documentary.

The director took home that trophy, a golden helix of a film strip mounted on a base, but Schuetz came home with a collectible of his own: a paper napkin with a thank-you from Trumbull, his signature and a sketch of “2001’s” Discovery spacecraft and the film’s enigmatic monolith.

“Can you think of anything cooler than going to dinner with Douglas Trumbull? It was magnificent,” Schuetz said.

In his Baylor office, its walls flanked with framed Bonestell space prints, including the famous “Saturn As Seen From Titan,” Schuetz points to his most prized trophy: a sleek silver rocket ship, not unlike those Bonestell frequently pictured, atop a filing cabinet.

It is his 2002 Hugo Award, given for outstanding work in science fiction, for “The Art Of Chesley Bonestell.”

“Chesley Bonestell: A Brush With The Future” has upcoming screenings at the Long Beach International Film Festival in Long Beach, New York; WorldCon 76 in San Jose, California; and the Astronomical Society of the Pacific in San Francisco.

After that, Stewart hopes to sell DVD, Blu-ray and streaming video rights to the film, with those platforms allowing bonus videos for stories that did not get into the film.

One of the planned bonus videos, it turns out, is on Schuetz.

“He’s a legendary name for anything connected with Bonestell,” Stewart said.

Armstrong Browning Library assistant to the curators Melvin Schuetz, who co-produced an award-winning documentary on space artist Chesley Bonestell, looks at a book on Bonestell that Schuetz collaborated on.