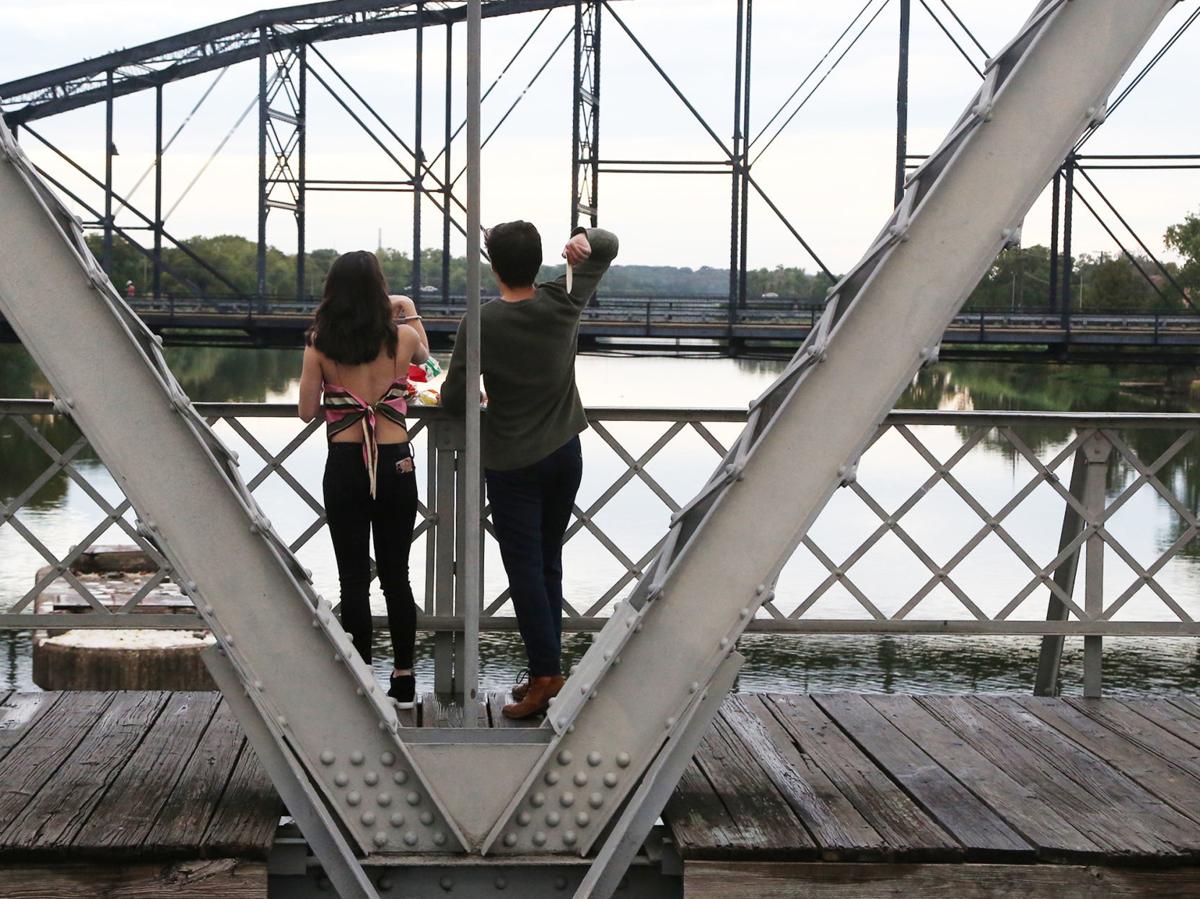 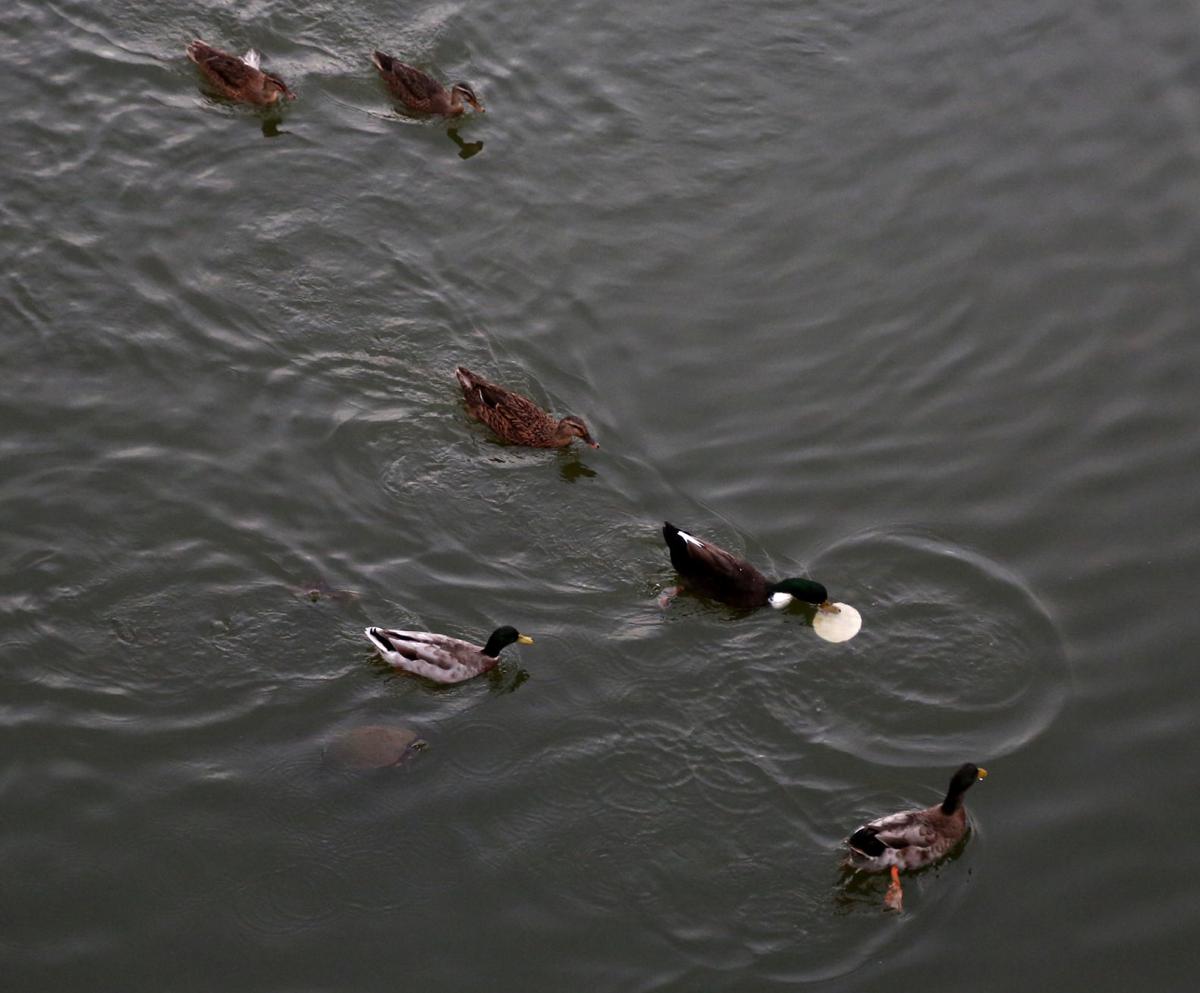 While it’s a common picnic practice, feeding bread to ducks is actually hazardous to their health.

Tourists are getting in on the unofficial Baylor tradition of tortilla-tossing, making memories and a mess that hurts local wildlife.

The origins of the practice are murky, but at some point students began to make a rite of passage of standing on the Waco Suspension Bridge and trying land a tortilla on the former bridge pier in the Brazos River.

The tradition dates back at least a decade, Waco Parks and Recreation Director Jonathan Cook said, but it has been rising in popularity recently, raising concerns about littering and the nutritional deficiencies in the ducks and geese that gobble down the tortillas.

“It seems this tradition has peaked a little bit, but any time school is back in session it seems to come back up again,” Cook said. “We see more trash on the Mondays following game day weekends.”

Throwers tend to leave the tortilla bags strewn around or tie them to the bridge, and the parks department has to allot time to remove them.

“While we’re all for tradition, it does present some challenges in regards to our operations and keeping the park clean,” Cook said. “This is not an activity that we approve of. No. 1, we want to keep the Suspension Bridge looking as clean as possible. Remember, it’s a historical structure.”

The tradition may meet its match soon. The bridge will close for an extensive renovation project soon after Sunday’s Ironman 70.3 triathlon, and it will remain fenced off for about two years as decking, anchor houses and cables are replaced.

Plenty of young people and students from other colleges, like McLennan Community College, have taken part as well, but the practice is mostly associated with Baylor students.

Tortilla-tossing is a common item on most student-made versions of the “Baylor Bucket List,” a list of experiences students are encouraged to try before graduation. The university’s version of the list only recommends taking a stroll on the bridge.

Hayden Swearengin, from Glen Rose, graduated from Baylor over a year ago. He said he participated in the tradition within his first few months at the university.

“I would say most people do it as a freshman, right when you get here,” Swearengin said.

Accounts vary as to what a successful tortilla landing is supposed to guarantee: good grades, a timely graduation or overall good luck.

When Swearengin went to the bridge with his friends, they told him landing a tortilla on the pier is supposed to guarantee a “ring by spring,”ensuring the lucky thrower will get married.

Swearengin said the tradition is widespread, and most students never realize they’re not supposed to fling tortillas into the Brazos River. However, Cook said the litter isn’t the only issue.

Participants sometimes climb the bridge, either to find a good vantage point or to tie empty bags to it. He said while no one has been injured yet, the bridge is a historical landmark and was never meant to be climbed.

“It seems to become a contest of who can climb up the bridge the highest and tie their bags, so it’s a litter issue,” Cook said. ”It’s amazing, we’ve had to bring out bucket trucks and ladders to get some of these bags.”

Park rangers do sometimes catch people in the act and remind them not to litter, but the tradition persists.

“There is not a specific ordinance that addresses tortilla-tossing, obviously, but it does fall under not littering in the parks,” Cook said. “Whether it’s the bags or the tortillas, we consider that littering.”

Whether they land on the pylon or not, the tortillas usually end up in a bird’s belly. While feeding bread and other refined carbohydrate products to ducks is not a new concept, experts say those foods are nutritionally lacking and can cause health problems in waterfowl.

James Kusmierczyk, staff veterinarian at Cameron Park Zoo, said any kind of enriched or processed food, especially flour-based ones like bread and tortillas, is bad for waterfowl.

“You have a lot of carbs, and not a lot of vitamins and minerals,” Kusmierczyk said. “For waterfowl, if they fill up on that then they’re not really getting a complete diet, and it’s not anything like what they would normally eat.”

He said the worst examples of malnutrition occur in ducklings, leading to a condition called “angel wing,” named for the way the bird’s carpal joint causes their wings to stick out unnaturally, like Renaissance-era paintings of cherub’s wings.

“In a chick, if they’re fed calorically dense food, things like skin and muscle can grow at a slower rate than bone,” Kusmierczyk said.

The bird’s wings ends up flipped out to the side and the feathers invert into an unnatural position, leaving them unable to fly and often leading to an early death. Adults that eat a bread-heavy diet will become generally unhealthy, but won’t develop angel wing.

“Not every bird that eats a tortilla is going to get it, but it can happen,” Kusmierczyk said. 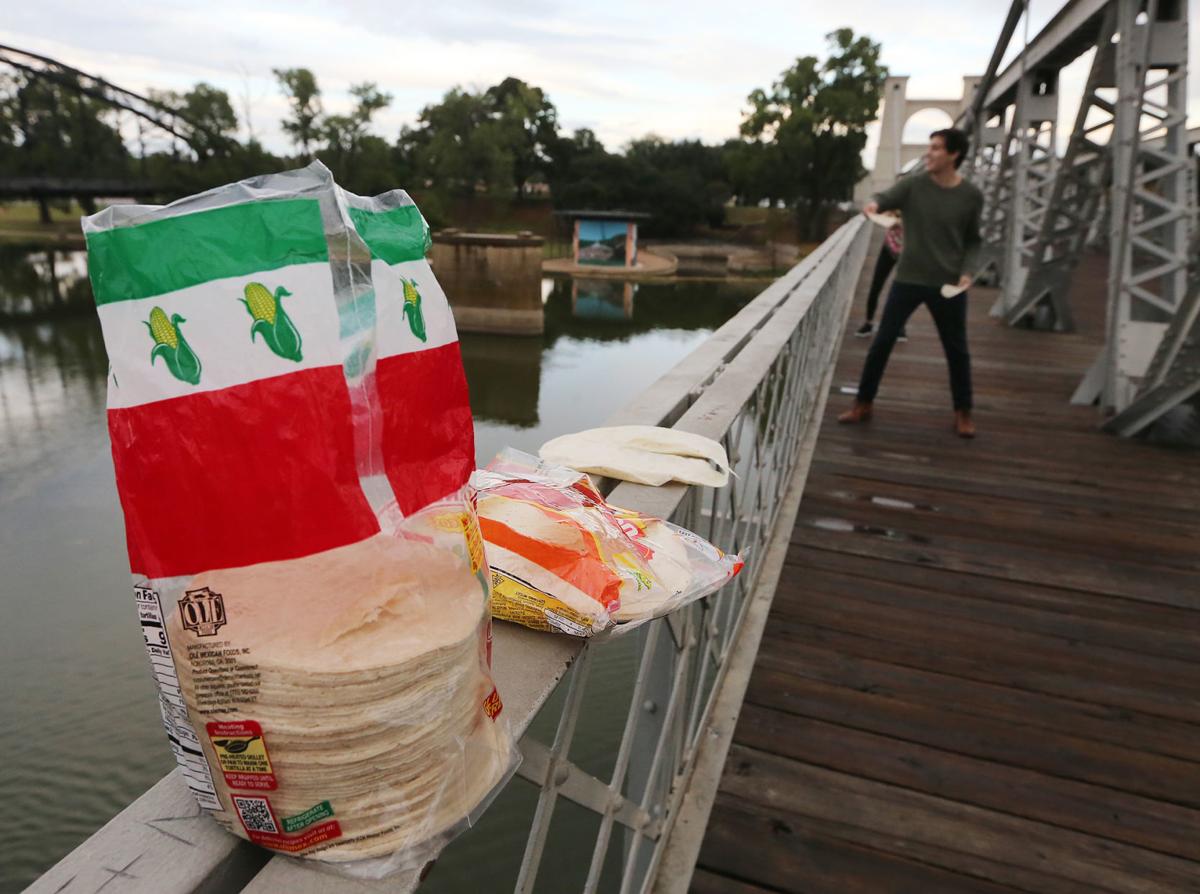 A bag of store-bought tortillas sits on the railing of the Waco Suspension Bridge. 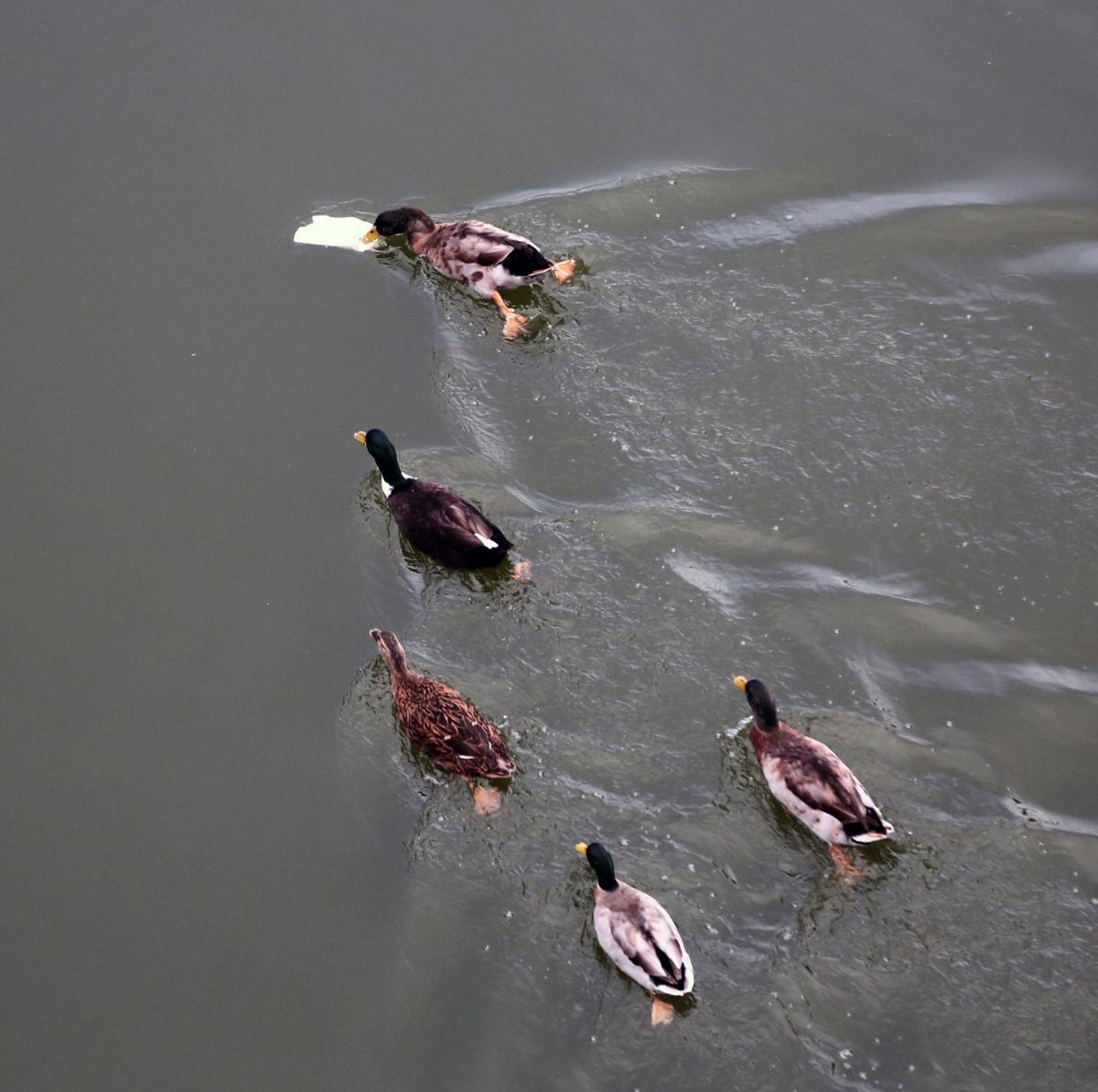 Ducks chase after a tortilla that did not make it onto the concrete pillar used as a target for tortilla tossers.

While it’s a common picnic practice, feeding bread to ducks is actually hazardous to their health.