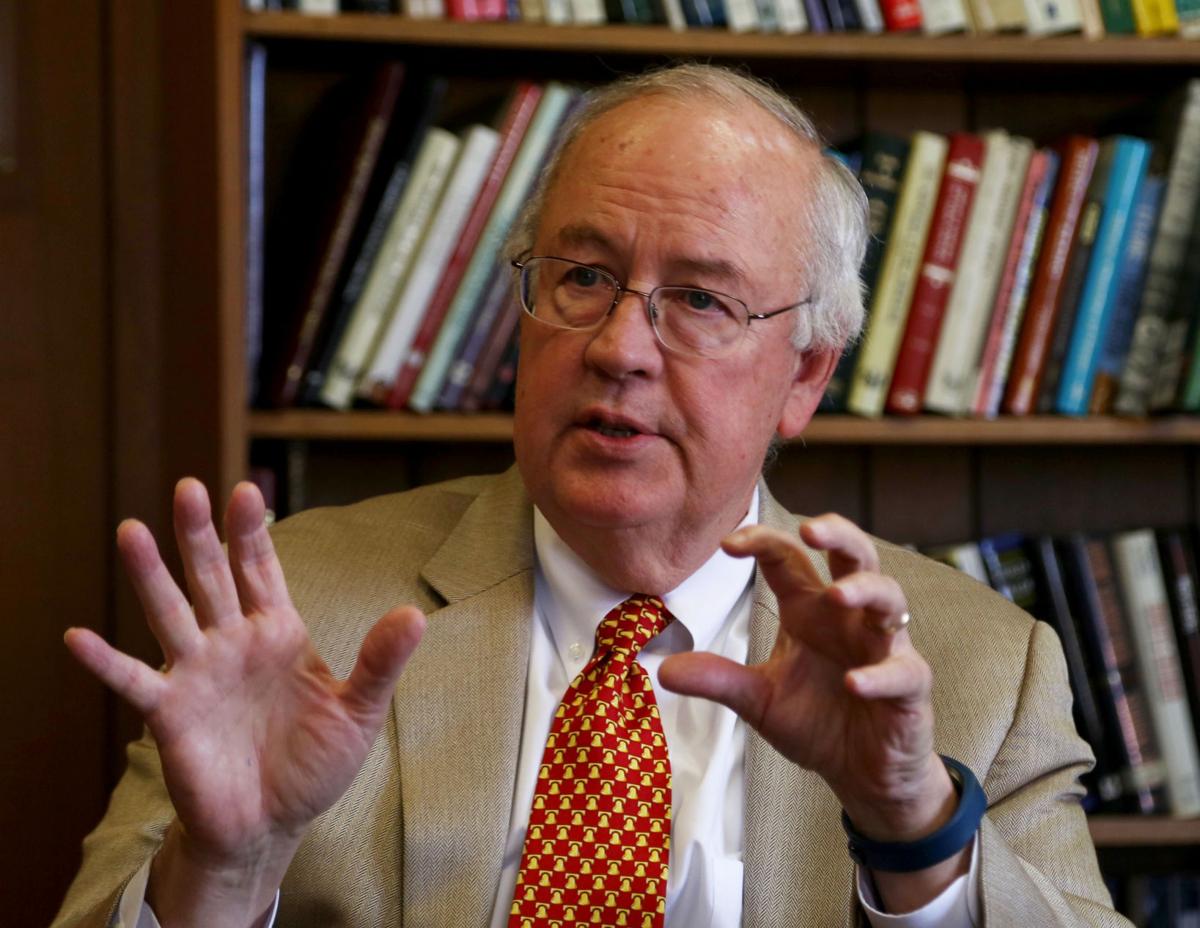 Ken Starr said he is “flourishing in freedom” since his removal as Baylor University president in May. 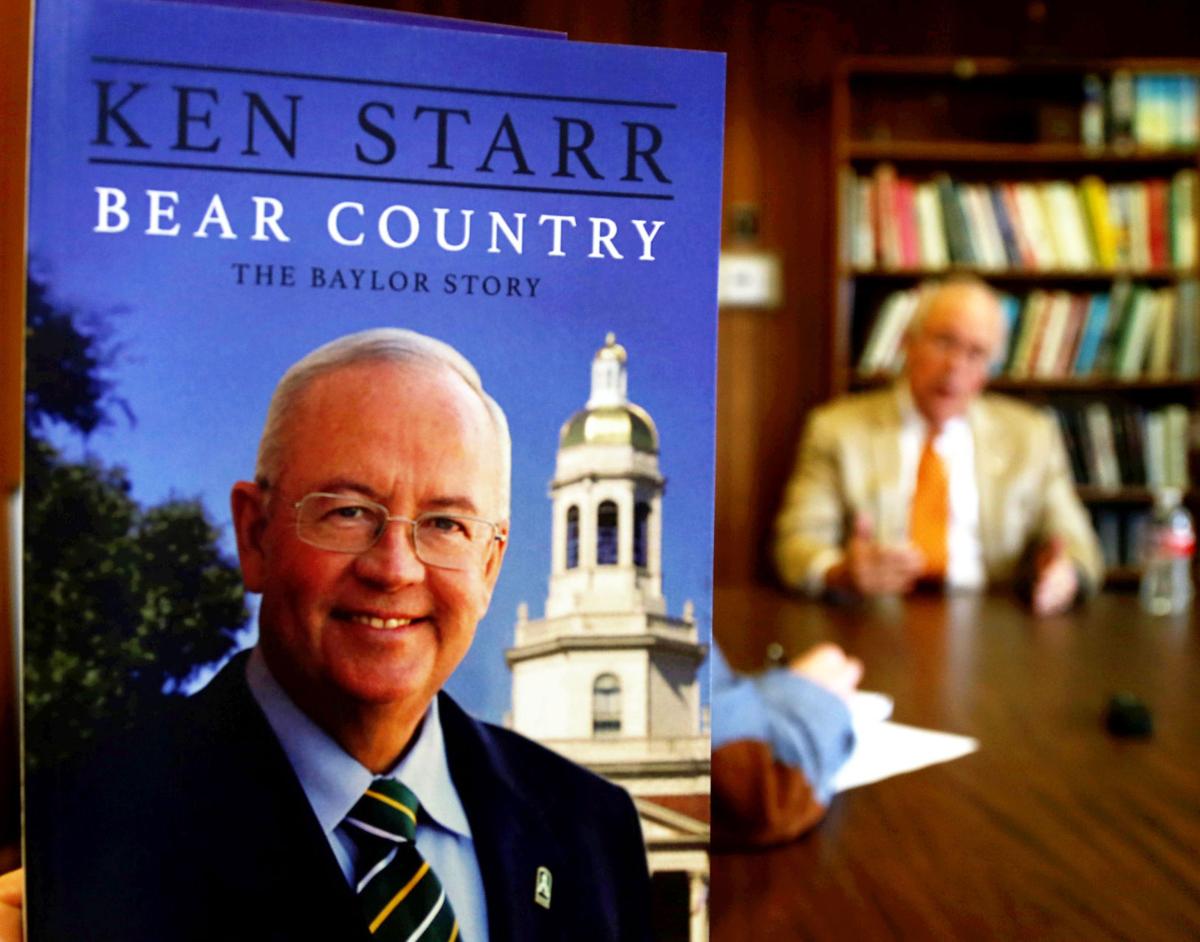 Ken Starr has said he is “flourishing in freedom” since his removal as Baylor University president in May. 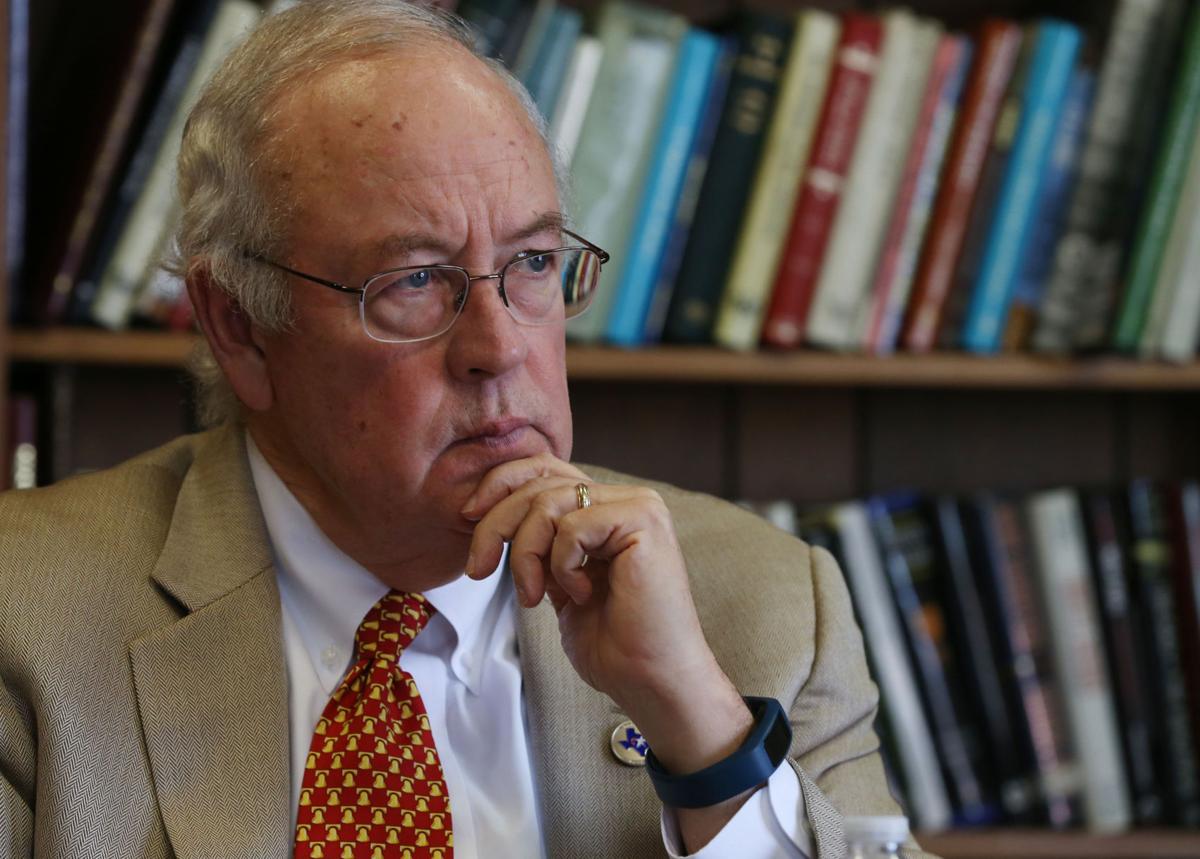 Ken Starr has said he is "flourishing in freedom" since his removal as Baylor University president in May. 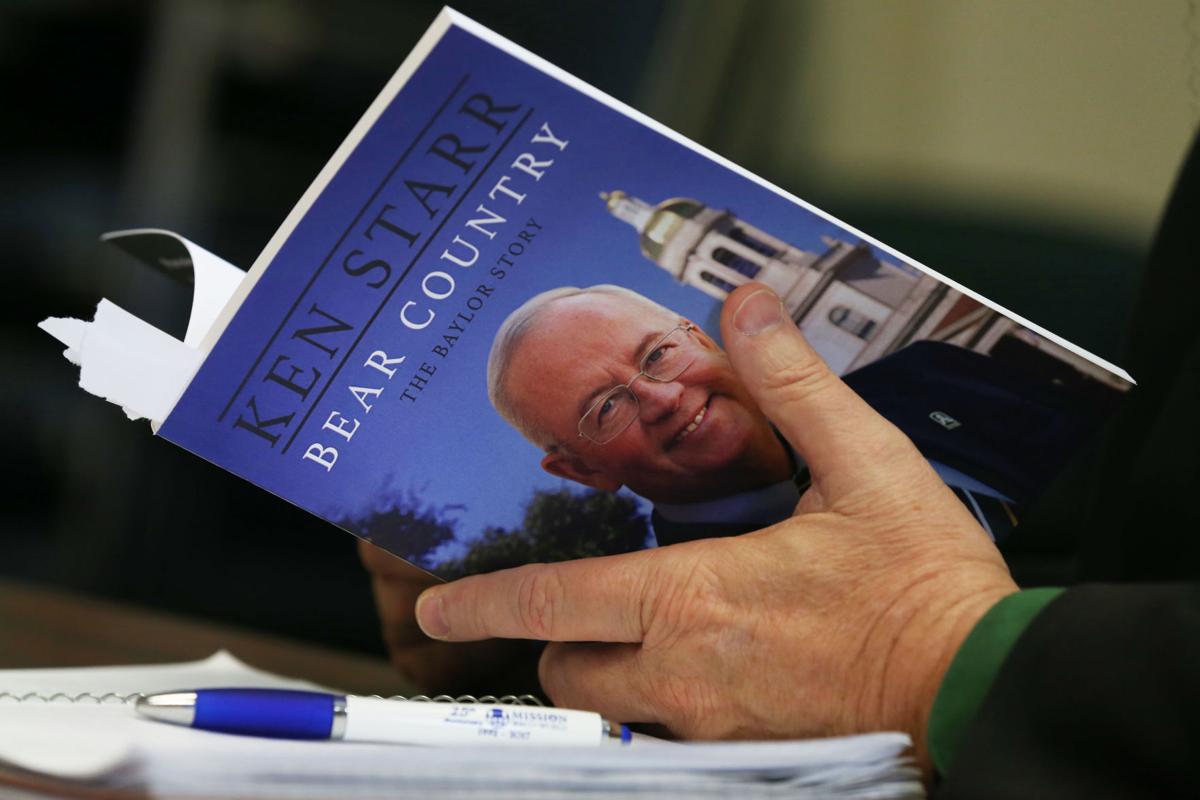 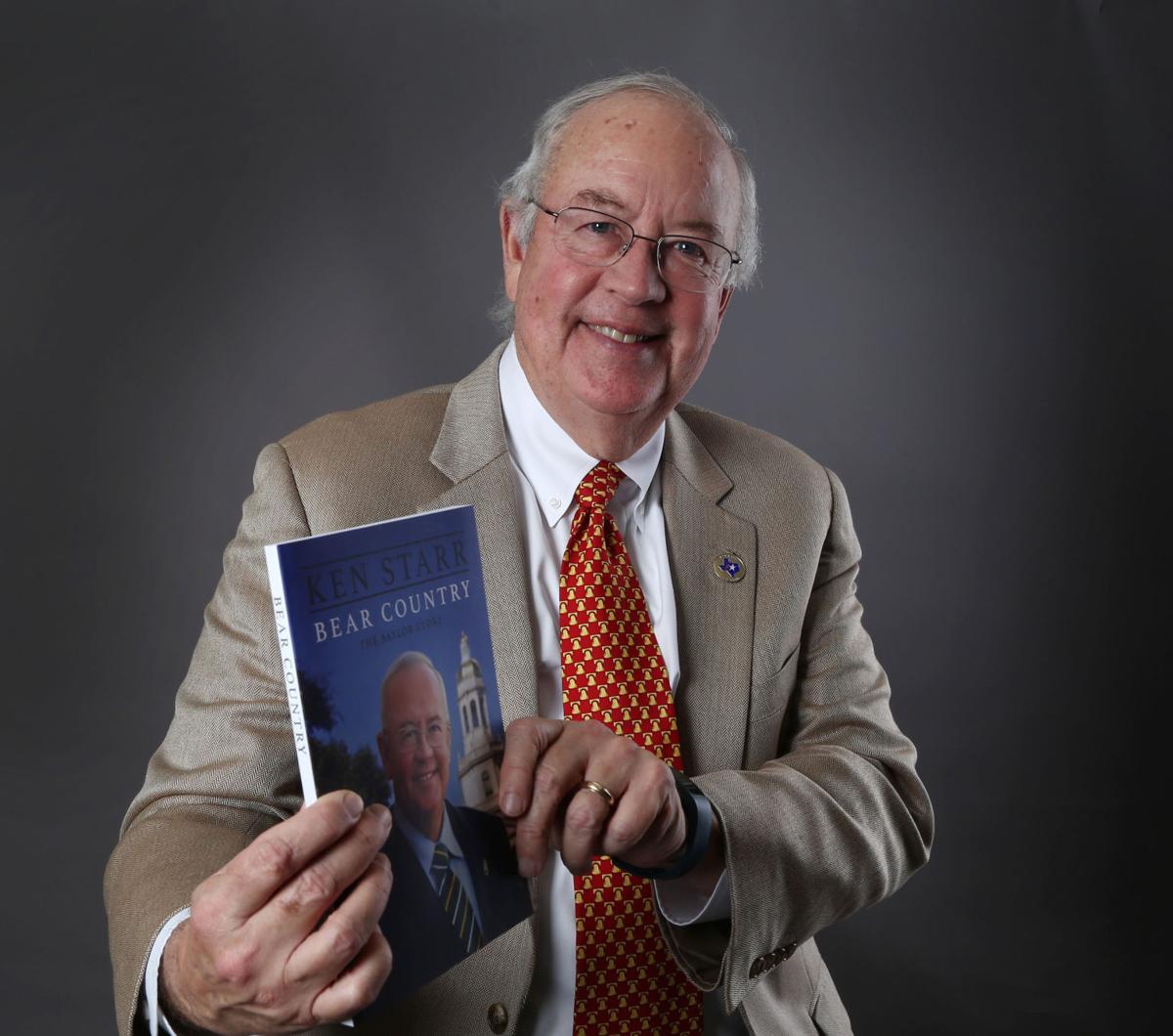 Starr also said he expected a more comprehensive report from the law firm that investigated Baylor’s institutional response to sexual violence, and he voiced concerns about federal interpretations of Title IX during President Barack Obama’s tenure.

Starr’s new book, “Bear Country: The Baylor Story,” was released this week. He called it “a love story to and about Baylor.”

Starr was removed as president in May after Philadelphia law firm Pepper Hamilton LLP found “fundamental failure” in the school’s Title IX implementation, regents reported in a 13-page “Findings of Fact” document. Briles also was fired amid the tumult.

“I continue to believe that Art Briles is an honorable man,” he said. “There may have been ways — and he would have to speak to it — of improving accountability, but I do not believe Art Briles conducted himself in a dishonorable way.

Starr referenced the February legal filing by three Baylor regents, which lists evidence of Briles and other staffers allegedly attempting to keep misconduct by football players out of the public eye and the school’s judicial processes.

Starr later resigned as chancellor — “as a matter of conscience,” he said — and he is no longer a Baylor Law School professor.

Starr addressed another storm surrounding women’s basketball coach Kim Mulkey, who recently said those who hear parents refusing to send their daughter to Baylor should “knock them right in the face.” The comments drew intense criticism, and Mulkey has since apologized for her choice of words.

“I love Kim Mulkey ... But I don’t like to see that language used,” Starr said. “And certainly the sentiment, which was hyperbolic — it was rhetorical hyperbole — lended itself automatically to criticism. As soon as I heard it, I regretted that the frustration, which has to be enormous for all of our coaches, came bubbling to the surface.”

Colleges and universities across the country, Starr said, struggle with Title IX implementation because of interpretations by the U.S. Department of Education. In April 2011, federal guidance from the department’s Office for Civil Rights said schools should investigate and adjudicate student claims of sexual violence.

“I’m deeply vexed by the entire structure that has been erected in American colleges and universities — fundamentally, on the basis of our institutional incapacity — to be effective adjudicators of these kinds of issues,” said Starr, himself a former federal judge and U.S. solicitor general. Starr was also the special prosecutor who headed the Whitewater investigation that led to former President Bill Clinton’s impeachment by the U.S. House of Representatives in 1998.

Starr said he takes issue with the adjudicatory process of such investigations — the crux of which lies with the “preponderance of evidence” standard of proof, meaning officials must find a 51 percent chance of a Title IX violation, a lower standard than the “beyond a reasonable doubt” bar criminal courts use.

“The higher education community, I think, has struggled unsuccessfully to strike the right balance to achieve fundamental fairness to everyone concerned,” Starr said. “And why is that? We’re not courts. We simply lack the expertise, and I think we lack the traditions of the law and the judicial system to ensure all persons, to the fullest extent possible, are fully protected.”

Still, Starr’s concern regarding the onus placed on universities in such matters in no way obstructed Baylor’s Title IX efforts, he said.

“There is a sense, ‘Well, you didn’t establish a full-time Title IX mechanism consistent with the April 4, 2011 letter,’ and that’s factually untrue,” Starr said.

Additionally, in 2013, Starr created a task force to review university policies and practices regarding sexual violence, he wrote.

Board gets ‘high marks’

“I gave high marks and continue to give high marks to the board of regents in terms of its stewardship on the entire Title IX effort, through especially the audit and compliance committee,” Starr said. “But the entire board, during my tenure, was very mindful of the need for student safety generally, and so I would continue and have publicly continued to defend not simply the administration but the board of regents in terms of seeking to do our best.”

Ken Starr on the board of regents

The law firm and investigating attorneys specialize in reviewing institutional response to reports of sexual and domestic violence.

“I was expecting — and I don’t mean this as a criticism — I was expecting a report along the lines of Pepper Hamilton’s Occidental College report,” Starr said. “And that was, in fact, held up by Pepper Hamilton in my own conversations with them as, I don’t want to say a model, but as an example (of), ‘Here’s what we do.’ And that’s very consistent with what I would expect.”

Pepper Hamilton attorneys first presented their findings to a special committee of the board, then to the whole board. Along with the 13-page Findings of Fact document, Baylor released Pepper Hamilton’s 105 recommendations for improvement. Last month, regents released the most detailed information yet of Pepper Hamilton’s investigation in a legal filing involving a fired athletics staffer.

Yet, the Baylor Line Foundation alumni group, an organized group of prominent donors and a faction of former regents have called for a full report to be written and released.

Starr went on to say a full report from Pepper Hamilton “certainly would have contributed to a reasoned discussion about going forward, as well as looking behind.”

Regents have resisted pressure to release the report, saying it would take at least six months to compile.

Starr’s 150-page book chronicles his six years as Baylor president, including his efforts to keep the Big 12 Conference intact and his management of deep tension between the university and the Baylor Alumni Association, which became the Baylor Line Foundation after a yearslong battle with regents and administration.

“Ultimately, it’s a story about Christian higher education where the noble end ever in sight is the transformation of the thousands of students who entrust themselves (through their parents) to the nurturing, and challenging, care of a loving but demanding faculty,” Starr writes in his introduction.

Moving forward, Starr said he is being considered for a U.S. Department of State position as an ambassador for religious liberty.

He also has volunteered with Waco High School’s mock trial team and McLennan Community College’s Presidential Scholars program, all while spending more time with his grandchildren.

Despite the abrupt and controversial end to his tenure as Baylor’s president, Starr said he is enjoying his newfound endeavors.

“Flourishing in freedom,” Starr said of his time since his removal.

Former Baylor University President Ken Starr recently sat down with the Tribune-Herald to discuss his time at Baylor, which he writes about in…

Ken Starr said he is “flourishing in freedom” since his removal as Baylor University president in May.

Ken Starr has said he is “flourishing in freedom” since his removal as Baylor University president in May.

Ken Starr has said he is "flourishing in freedom" since his removal as Baylor University president in May.