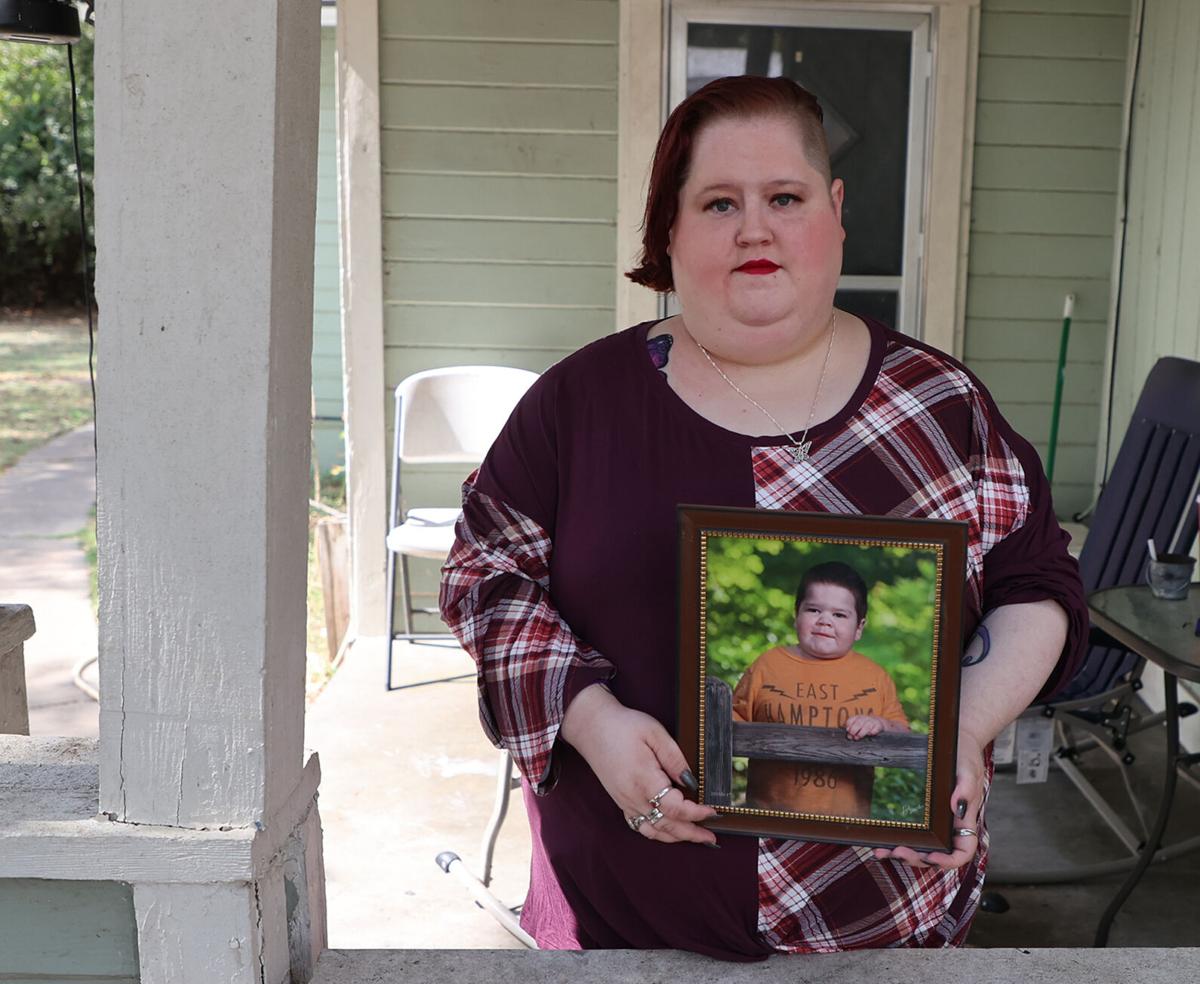 Emily Parsons holds a photo of her son James “Jamie” Parsons, the 11-year-old Waco boy who died Sept. 24 from COVID-19, marking the first pediatric death in McLennan County from the disease. 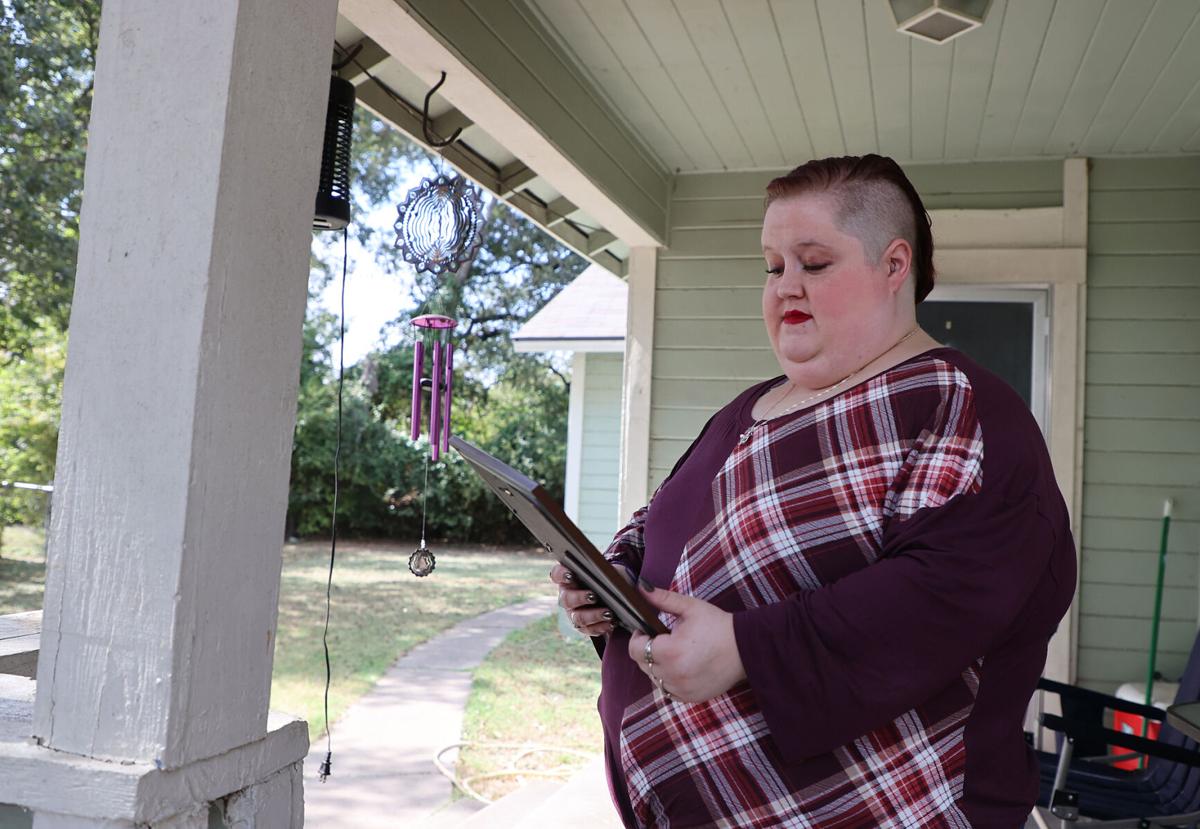 Emily Parsons looks down at the photo of her son James “Jamie” Parsons, the 11-year-old Waco boy who died Sept. 24 from COVID-19. Parsons’ older sister also died from COVID-19 earlier in September.

Emily Parsons sat on the porch of her Bellmead home Thursday morning holding a picture of her son, James “Jamie” Parsons, recalling his love for Matchbox toy cars, SpongeBob and McDonald’s chicken nuggets during his 11 short years.

Later that evening, Parsons and her family would be hosting the funeral visitation for the boy, whose passing Sept. 24 marked the first pediatric death from COVID-19 in McLennan County. With the grief of losing her son and her oldest sister to COVID-19 this month still raw, she cried out for those in her community to protect the vulnerable during this lingering pandemic.

“One minute I’m OK, the next minute I’m not,” Parsons said. “I’m angry because this could have been prevented by taking basic steps. Wearing a mask, getting the vaccine.”

Jamie had health complications which made recovery challenging, but Parsons carried hope that her only son would be able to pull through.

“Jamie fought really hard and for a while we really thought he was going to make it,” Parsons said. “We just thought it was going to be a slow healing as doctors said kids like Jamie, who had other medical issues, were taking longer to heal.”

Parsons had always advocated for her son, especially after his diagnosis at age 4 with Hunter syndrome, a very rare, inherited genetic disorder.

According to the Mayo Clinic, Hunter syndrome causes low levels of the enzyme iduronate 2-sulfatase, whose job is to break down certain complex molecules, meaning they build up in harmful amounts.

Pre-COVID, Parsons said Jamie loved going out, and they took every opportunity to get out of the house. The 11-year-old loved going shopping and attended school at La Vega ISD.

“He went everywhere we did,” Parsons said. “We did not believe in keeping him home. I think children with special needs, especially, need to be seen, and people need to learn how to deal with them.”

When COVID hit, the family went into quarantine and for the next year. Parsons said she barely left the home, opting for homeschooling and turning to virtual doctor’s visits when possible.

“I was terrified, my anxiety was really bad because I was so scared of bringing it home,” Parsons said. “I was angry at people because the CDC (U.S. Centers for Disease Control and Prevention) was recommending masks and people were like, ‘I’m not going to do that,’ and I thought, how selfish could you be? It is such a simple thing to me.”

Once cases began dropping in the county, Parsons felt comfortable taking Jamie back out, adding that the family enjoyed going to eat at Olive Garden, Jamie’s favorite restaurant. However, outings were short-lived as cases surged in July and the family went back into quarantine.

In late August, Parsons, Jamie and her sister, Larissia Perrucci, who all lived in the same house, got diagnosed with COVID-19. Parsons had been fully vaccinated, as had her husband, Michael Prestwood, who did not test positive.

Like many, Perrucci had reservations regarding the vaccine, her sister said, but after many conversations she had decided in favor of it. She had only had one dose of a two-dose COVID-19 vaccine before falling ill.

According to Parsons, Perrucci had a hard time getting her second dose as she suffered from ovarian cancer, which often made her run a fever.

Perrucci died from COVID-19 Sept. 9, three days after her diagnosis and one day after she was hospitalized at Ascension Providence in Waco.

Jamie had been admitted to Baylor Scott & White McLane Children’s Medical Center in Temple on Sept. 6, and Parsons was at his bedside when she got the call that her sister was not going to make it. She had to drive to Waco to unplug her sister from the ventilator.

“We had just had a conversation a month ago where she promised she would be here for me from here on out,” Parsons recalled through tears. “So I’m mad at her, she left me.”

To this day, Parsons does not know how her family caught COVID-19.

“I work with the public,” she said. “One of our nurses had children in school who ended up with COVID, so we don’t know if it came that way. But really, with the delta variant being so highly contagious it can come from anywhere. People you come in contact with who don’t know they have it yet. It could have been anywhere. We don’t have a definitive one point.”

“Our family will never be the same,” Parsons said, fighting through tears. “I lost my big sister and I’ve lost my only child. Wear the damn mask. Take the shot, for the love of God. Please, because I don’t want another family to go through what we have gone through.”

For Parsons, the virus felt like a bad flu. She had a headache, lost her sense of taste and felt exhausted, but she is certain the Moderna vaccine protected her from more serious symptoms, given that she is diabetic, overweight and has asthma.

Jamie was dismissed from the hospital Sept. 9, the day Perrucci died, but he was readmitted two days later and on Sept. 13 had to be placed on a ventilator.

On the morning of Sept. 24, Parsons made the decision to not put Jamie through any more experimental procedures, and Jamie died around noon.

“They gave him a dose of morphine right before so he wouldn’t feel anything, which was really important to me because I didn’t want him to be scared,” Parsons said, eyes tearing up. “I got to hold him until he got cold and I just couldn’t anymore. … I kissed his little forehead and I covered him up. Leaving him in that room was one of the hardest things I’ve done in my life.”

That same night, she had to go to Ascension Providence again because her husband had suffered a stroke.

Parsons said she knew Jamie’s Hunter syndrome was terminal, but she believes that without COVID-19 she would have had more time with her son.

As she grieves, Parsons wants people to remember Jamie and to know that his death, and her sister’s, could have been prevented.

“People are selfish, and because of people not doing what they needed to do, the virus mutated and now I’m burying my son,” Parsons said. “Wash your damn hands and wear a mask. It seems like such a simple thing and the fact that people are so resistant to it blows my mind.”

As she drove around town on Wednesday, handling last-minute arrangements for her son’s visitation and service, Parsons got the call that her sister’s ashes were ready to be picked up.

She now is trying to wrap her mind around a future without her sister and her only son.

“I feel so lost and like I don’t have a purpose,” Parsons said. “I know that is not true but that is how I feel right now. So much of my life was caregiving. Everything I did was Jamie. … I don’t even know who I am because so much was being Jamie’s mom. I know I’ll create a new normal, I know, but I don’t want that new normal. I want my baby.”

She has appreciated the outpouring of love from the community as many people have reached out to share stories of Jamie and his impact on their lives.

“That makes me proud as his mother to know the impact that he had not just in our lives but in other peoples,” Parsons said.

Parsons asked those who would be attending Jamie’s services to bring toy Matchbox cars to be donated to McLane Children’s Hospital as a thank-you to the staff and as a treat for other children.

“I wanted to do something for McLane’s because they did so much for my family,” Parsons said, sharing that the staff at McLane’s recorded Jamie’s heartbeat for her and presented it to her in a teddy bear as a way to keep him with her.

“The perfect thing is Matchbox cars because everybody can afford a dollar Matchbox car,” Parsons said.

The family has received over 300 Matchbox car donations.

His service is scheduled for 2 p.m. Friday at Lake Shore Funeral Home Chapel.

Emily Parsons holds a photo of her son James “Jamie” Parsons, the 11-year-old Waco boy who died Sept. 24 from COVID-19, marking the first pediatric death in McLennan County from the disease.

Emily Parsons looks down at the photo of her son James “Jamie” Parsons, the 11-year-old Waco boy who died Sept. 24 from COVID-19. Parsons’ older sister also died from COVID-19 earlier in September.