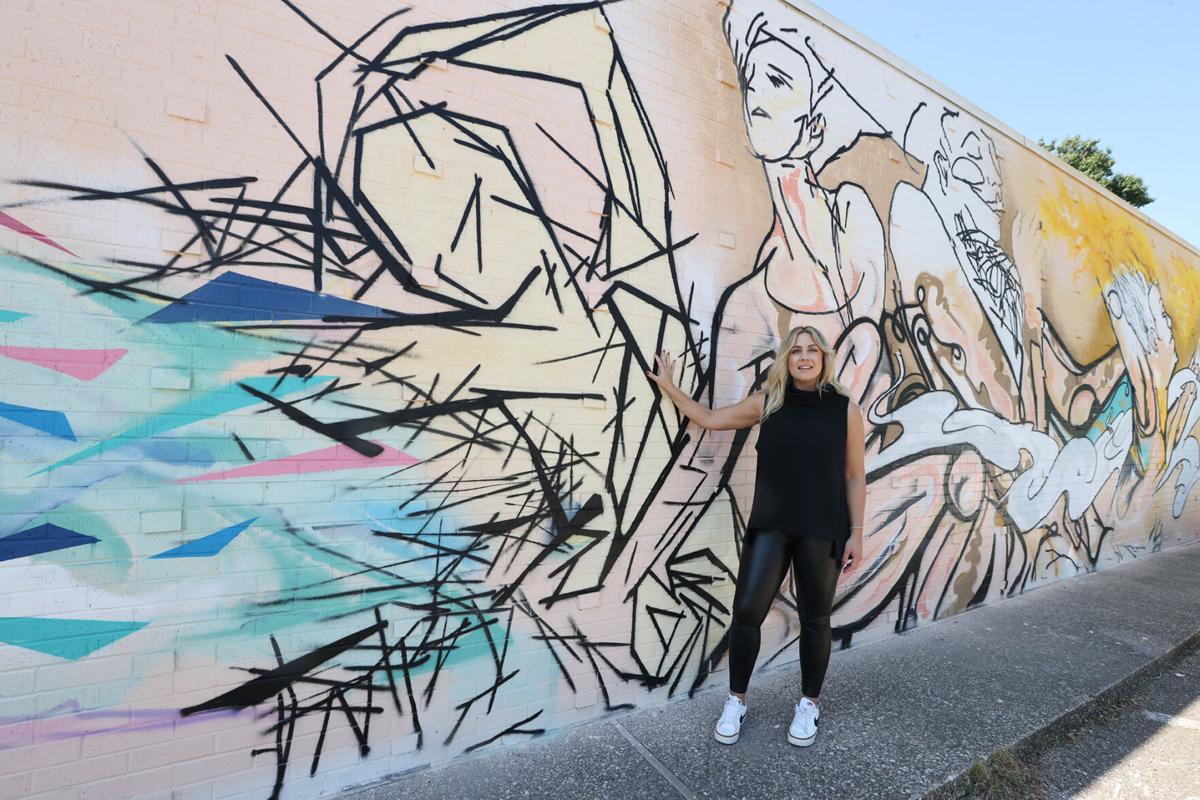 Emily Mills of Jesus for Love stands in front of the new mural by local Waco-based artist Will Suarez. 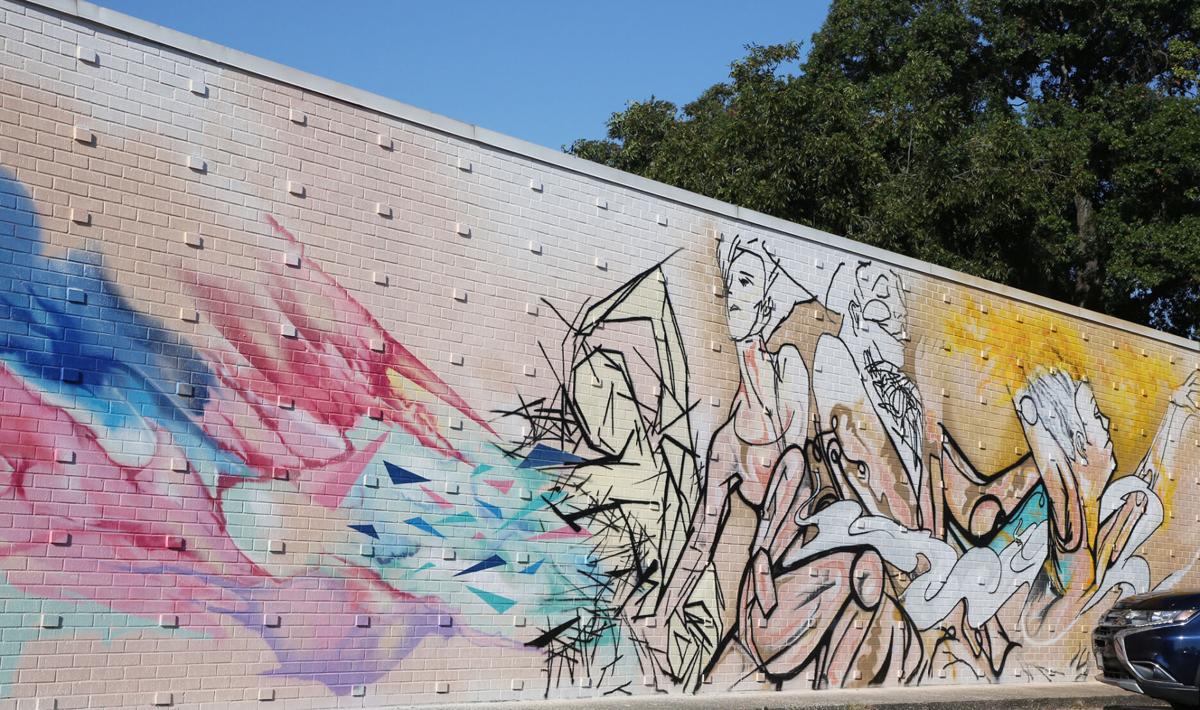 A new mural by Will Suarez is based on sketches by one of the four women the mural honors at Jesus Said Love. 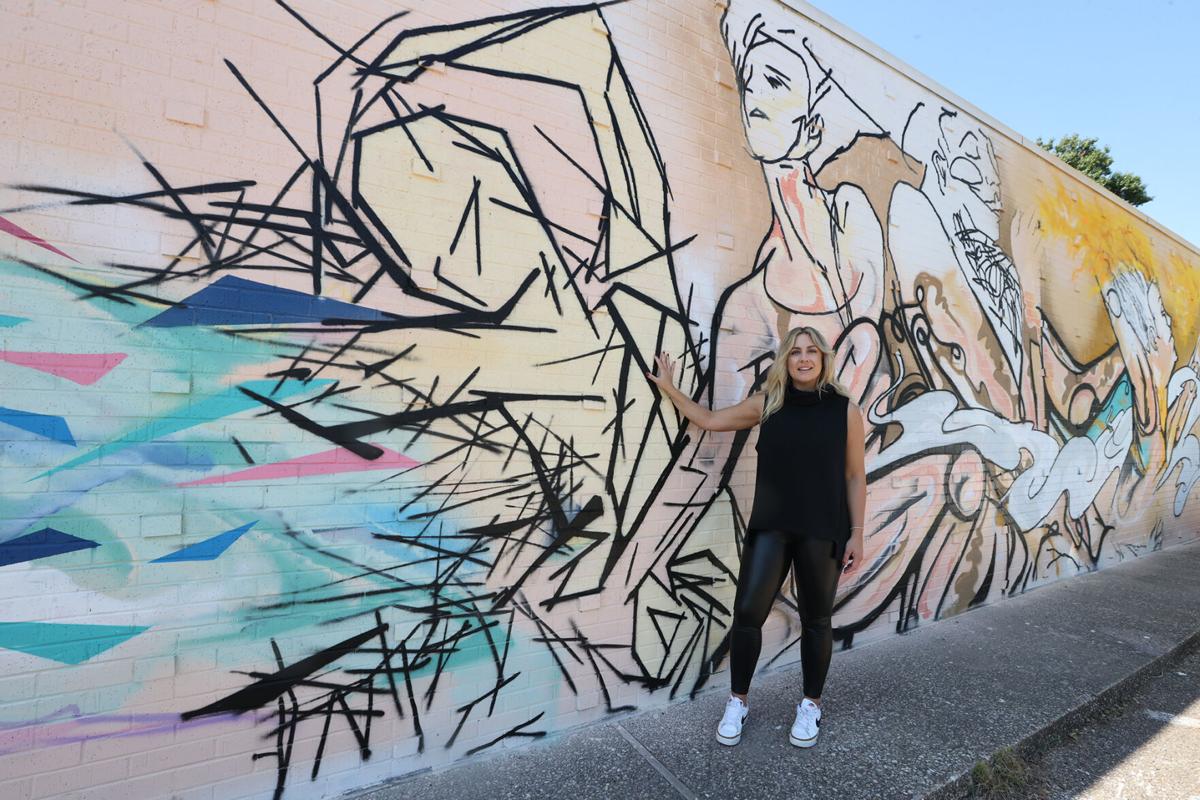 A new mural at Jesus Said Love headquarters honors four women who have died in recent years and builds on sketches by one of them to serve some of the same purposes as the organization itself.

The 18-year-old nonprofit at 1500 Columbus Ave. aims to support women exploited by commercial sex industry and human trafficking. The mural spreads the message that exploited women are in the Waco community, they matter and are welcome at Jesus Said Love, founder Emily Mills said.

“When you are marginalized and disenfranchised you do feel forgotten,” Mills said. “You feel like society doesn’t see you, the systems don’t see you and that everything has failed you, that your needs and your presence doesn’t matter. … It means a lot to be seen.”

The mural unveiled last week honors four women who had walked through the doors at Jesus Said Love: Dixie, who died in 2011; Alexis, who died last year; and Kathleen and Angela, who died this year. It uses Kathleen’s artwork to tell her story and, inevitably, the story of many others, Mills said.

“Hers was one of long-term struggle, longtime work in the industry, who we cared for, but eventually she died of health complications, she died of a heart attack,” Mills said.

Kathleen, an artist, had dissociative identity disorder and often reflected her distinct personalities through her artwork, Mills said.

For her, Kathleen’s artwork reflected different stages of her metamorphosis as she would often work through her own pain and suffering through art.

“I see Kathleen seeing herself as two-dimensional bones and then being transformed into a full-colored dancer,” Mills said.

For Melissa “Mimi” Normart, case manager at Jesus Said Love and project leader for the Love My Momma program, the art is not just a reflection of those victims who have died.

“It means a lot to all the survivors because it lets us know that when we walk through the doors we are important and we are loved and we are wanted and we mean something to somebody,” Normart said. “Even when we aren’t here on this earth, we are still going to mean something, our footprints ... they meant something.”

The mural isn’t only for direct victims of sex trafficking, but for family and friends who are also affected by the hardships their loved ones faced.

Mills shared the story of Alexis, who died in a car accident in 2020, after relapsing and leaving the program. Mills said she hopes the mural will be a comfort to Alexis’ sister.

“This is also for her so she can come as a family member who lost someone to this life and she can find peace here,” Mills said.

Mills said it is not uncommon for family members to come by the organization.

“This is really just for everyone to find strength and hope even in grief, it is for family who have lost someone,” Mills said, sharing that Angela’s daughter asked when the mural would be complete so she could stop by to see it and remember her mom.

By using art, Mills hopes others will be able to connect to their pain and create a space where grief is not only allowed but also honored.

“One of the things that this work has taught me is that our stories are significant, no matter where we come from, all of us are surviving something,” Mills said. “Grief is an invitation to your story and we have to be able to honor the things that we lose along the journey of life. It is part of what makes us whole.”

With the idea in mind, Mills knew the perfect artists she could entrust the task of transforming Kathleen’s work into a colorful mural for everyone to enjoy.

Mill’s reached out to local Waco-based artist Will Suarez, who has been commissioned to do other murals around the city including one that is exhibited on the side of Putter’s, and explained the premise of her idea.

Suarez knew he wanted to be involved in the project.

“I felt really honored to celebrate her and her art as well, even though I didn’t get to meet her,” Suarez said. “It was just an honor to take what she did and evolve it a little bit.”

Suarez said he saw her sketches and was drawn emotionally into the story they were telling.

“Seeing her sketches you can tell that it was the same person but five or six completely different styles but they showed the development of one person,” Suarez said, saying he was able to see how Kathleen, who suffered from personality disorders, used her art to draw different versions of herself.

This was the first time Suarez had used someone else’s art as groundwork for a mural so it was important for him to keep parts of Kathleen’s work the same.

“It speaks to her style,” Suarez said. “It’s a little different than what I normally do but I was able to blend it together. The roughness and blurriness of the lines is more of her work so I was happy to honor her style as well.”

Through looking at Kathleen’s art, Suarez was able to connect emotionally to her.

“For this mural and much of the work that I have done, it’s more open ended and I try to promote peace and kindness and whatever emotions it may stir in someone, that is my ultimate goal,” Suarez said. “To connect with someone through my artwork.”

Mills also knew the importance of Suarez using his voice to lift up Kathleen’s.

“Ninety-seven percent of all harm in sexual violence against women in perpetuated by men so really this isn’t just a women’s issue,” she said. “This is about men and how men can be involved.”

The mural took three days of work and was unveiled on Monday at a donor dinner that Jesus Said Love held.

The organization’s next step is a memorial garden featuring benches with a clear view of the mural.

“We are still raising funds to get custom benches nestled between the pecan trees upfront as a spot where we can plant living flowers and a butterfly garden, which represents metamorphosis,” Mills said. “But also a place where we can dedicate benches to survivors who we have lost along the way.”

Normart said that as a survivor herself, she knows that having these dedicated spaces will encourage other survivors to walk through the doors of Jesus Said Love as they will know that they are important.

She said the garden and mural not only represent loss but also renewal for those who are still alive.

“It’s a representation of the old them passing and this is the new them, and this is a place where they can come and cope with that,” Normart said. “We need it, survivors need to see it.”

Mills hopes that anyone who visits the mural and takes a picture in front of it opens their heart to the message they are portraying.

“That survivors are resilient and we can pick up where they left off and where they have gone before us and we can carry that torch, we can carry that fire of hope with them,” Mills said. “This is a memorial not only for those who are gone but for those of us who live with grief, who have lived through what it means to have broken family systems, dysfunctional systems, mental illness. It means there is hope.”

Waco Police found a man with a gunshot wound Tuesday morning, but the circumstances of the shooting remain unclear.

Emily Mills of Jesus for Love stands in front of the new mural by local Waco-based artist Will Suarez.

A new mural by Will Suarez is based on sketches by one of the four women the mural honors at Jesus Said Love.