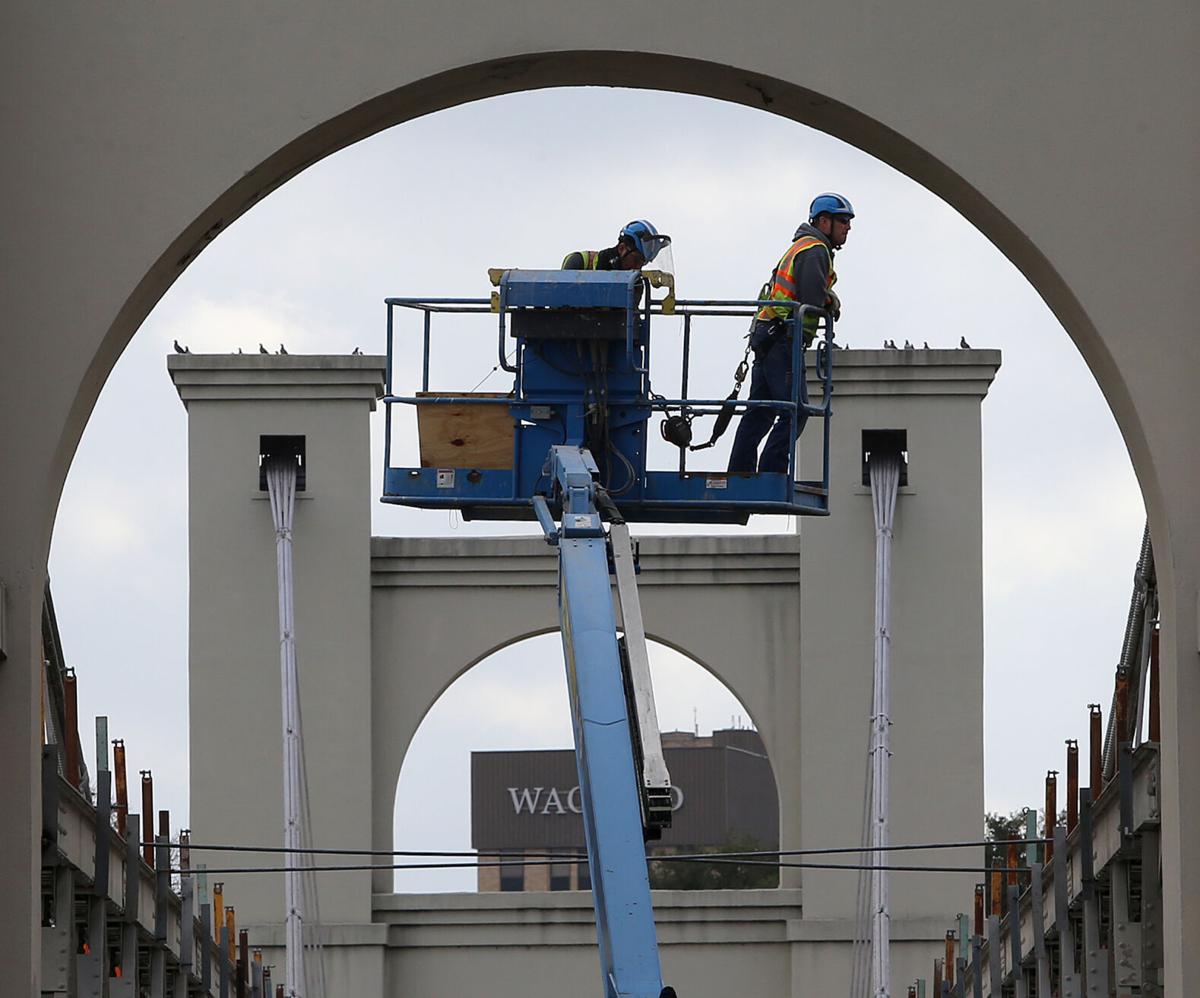 Engineers make their way back down after inspecting the cables on the Suspension Bridge. 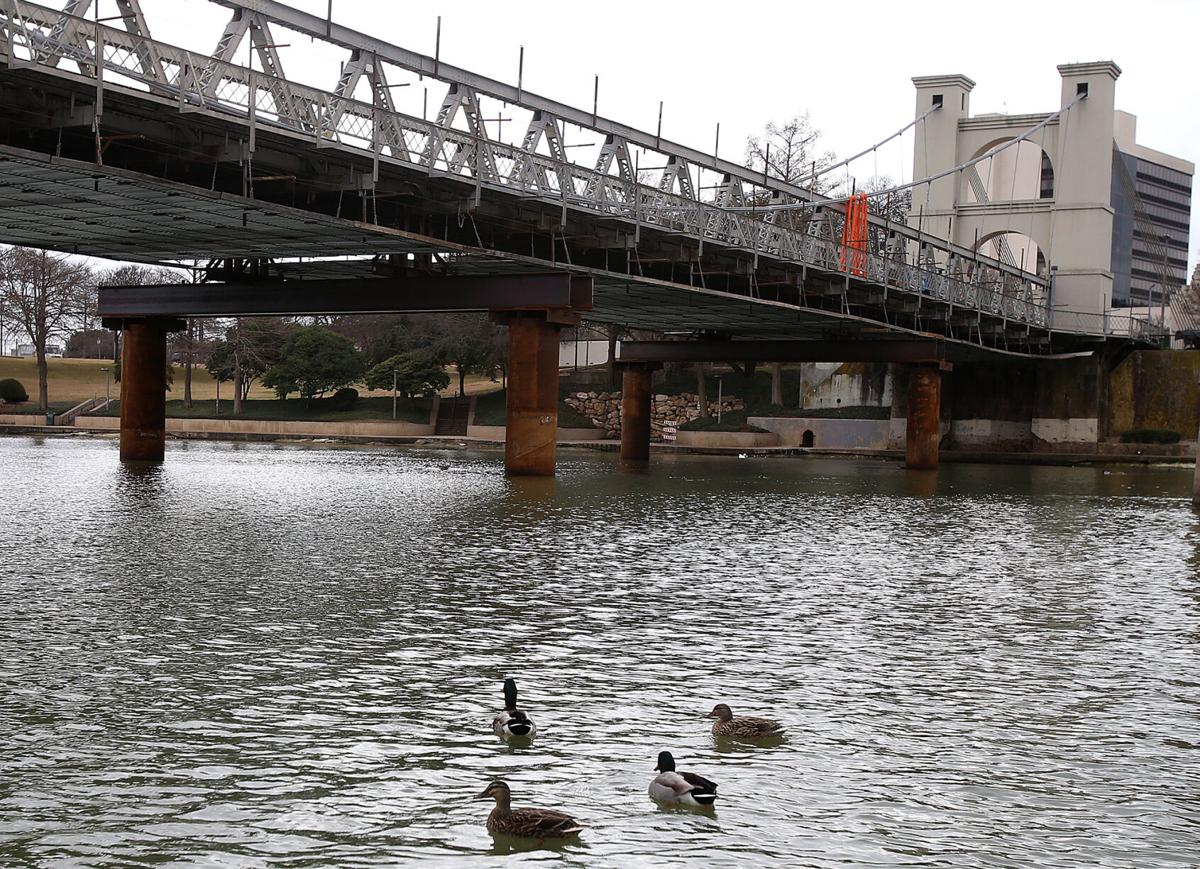 Ducks swim near the Suspension Bridge, which is closed to the public while being renovated. 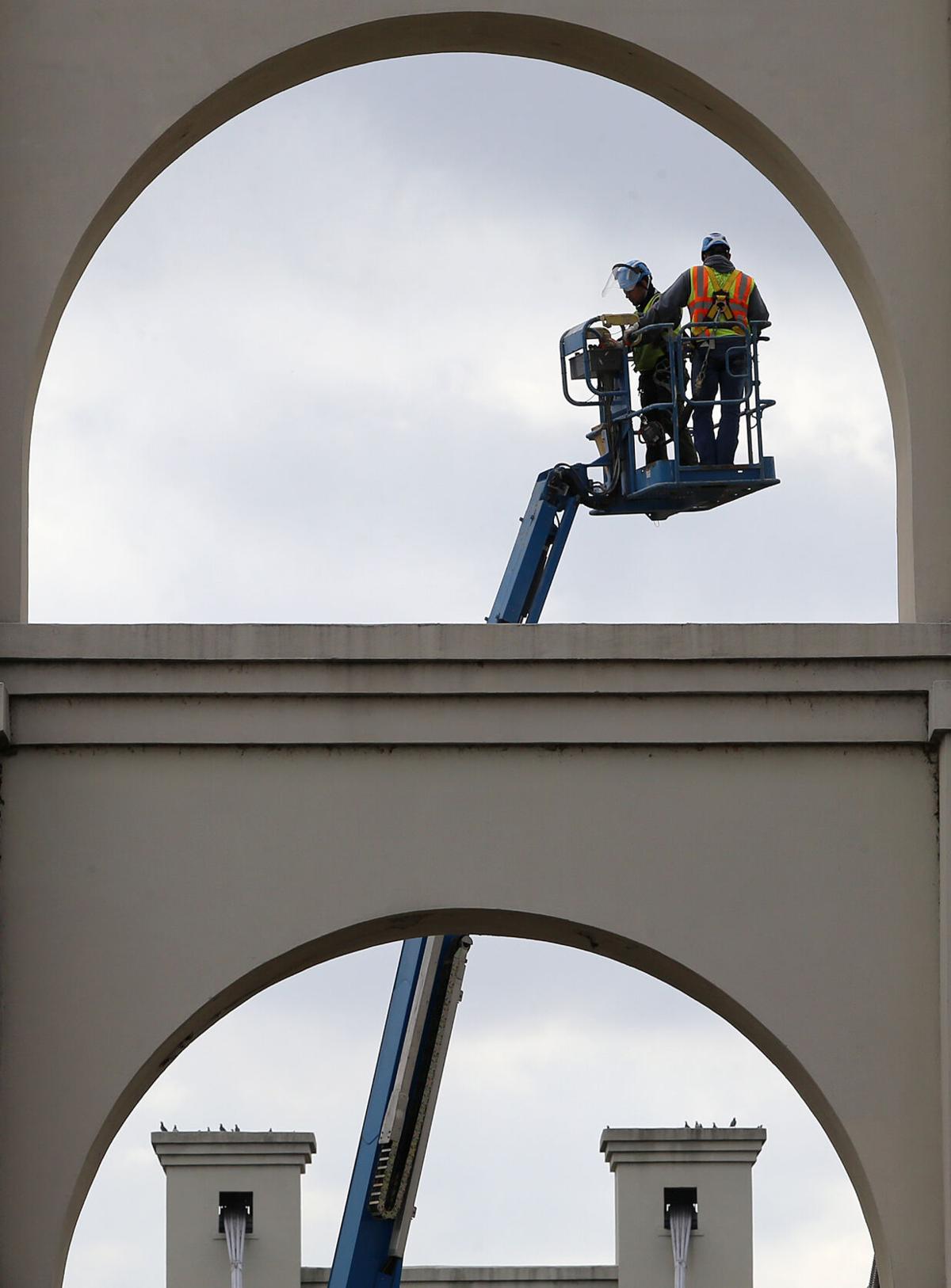 Engineers make their way back down after inspecting the cables on the Suspension Bridge which is closed to the public while being renovated. 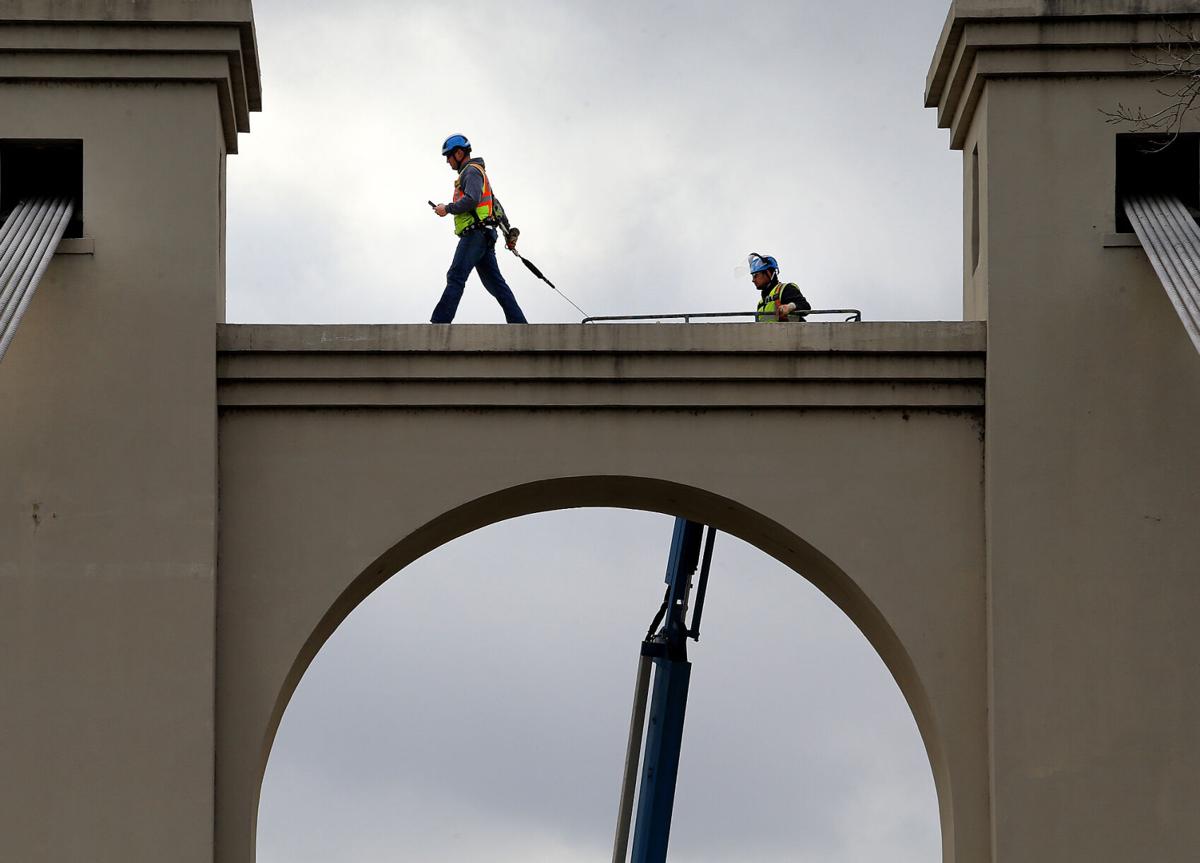 A engineer walks over to look at the cables on the Suspension Bridge which to the public while being renovated. 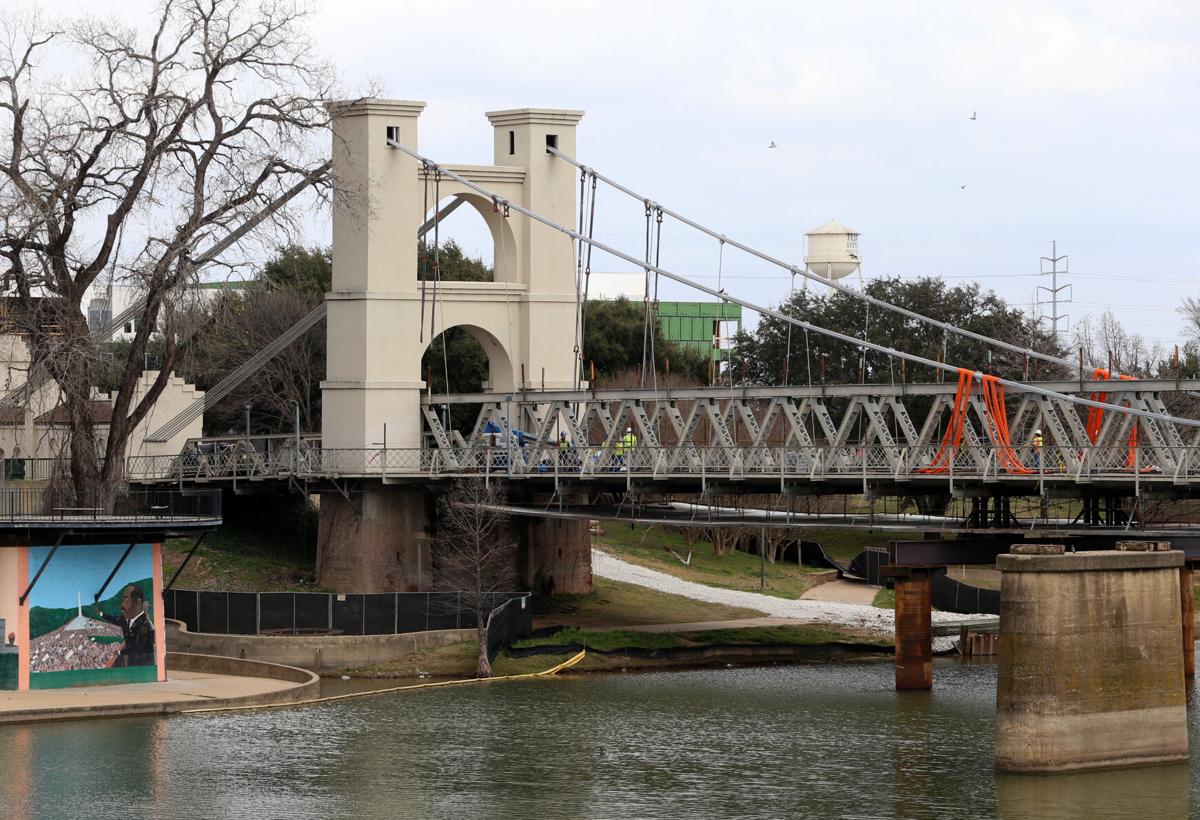 The suspension bridge is closed to the public while being renovated.

Cable removal is beginning on the Waco Suspension Bridge downtown, part of a $12.4 million rehabilitation project that may capture the attention of onlookers along Lake Brazos well into 2022, the project’s engineer said Monday.

“This is the first major rehabilitation in more than 100 years,” said Patrick Sparks of Sparks Engineering. “Currently the contractor is in the middle of removing the existing cable, which will take a few weeks. Installing the new cable will get underway imminently.”

Crews are starting the cable work after sinking a series of temporary piers into the river in recent months to support the middle of the span during construction.

Sparks analyzed the historic bridge five years ago and is overseeing work by Gibson and Associates of Balch Springs.

“We prequalified the contractors, had four qualified bidders, and of those Gibson had the best proposal,” Sparks said. “They’re well known and reputable, and have completed similar work. There’s a sequence involved, and it won’t happen overnight. It starts with unloading the suspension cables. They will be sold for scrap, though the city may choose to retain small pieces.”

Sparks said the Waco project promises to be among his most notable in his decades-long career, comparable to his work on the rehabilitation of the Hays Street Bridge, an 1881 iron truss bridge in downtown San Antonio that is a source of civic pride.

“You see it on promotional materials, as you do Waco’s bridge,” he said.

Challenges to upgrading the Waco Suspension Bridge included “understanding the bridge, how it was built, what went wrong with it and what was right with it. That took a lot of investigation and a lot of study,” said Sparks.

“Next came determining the most feasible way to carry out the rehabilitation from a construction point of view,” Sparks added in an interview.

Tapping his research, Sparks said the bridge shaped local and state commerce, becoming important to cattle drives and those wanting to transport goods across the Brazos River. On top of that, he said, a suspension bridge was uncommon and considered an innovation and novelty.

It opened as a toll bridge operated by the Waco Bridge Co. on Jan. 6, 1870, and was sold to McLennan County 19 years later for $75,000. The county then sold it to the city of Waco for $1 with the stipulation the city would be responsible for upkeep, according to the Texas State Historical Association.

Today, the bridge anchors Indian Spring Park, its entryway near the Waco Convention Center recognizable by the Branding the Brazos artwork featuring longhorn cattle and drovers captured in bronze sculptures.

The firm that supplied the original steel cables for Waco’s Suspension Bridge later furnished cables for the Brooklyn Bridge, which opened 13 years later. The cables were replaced in a major overhaul by a Missouri firm in 1914. Those cables were stronger than the originals but over time have stretched imperceptibly and weakened, Sparks said.

Cable houses on each side of the Suspension Bridge will receive attention. Outside these structures, also called anchor houses, crews will excavate 15 feet of dirt, drill through the foundation to bedrock, and refill it with concrete.

Pedestrian traffic on the bridge will remain blocked during the project, which reportedly will last between 18 and 24 months. Sparks assured that Lake Brazos, along which commercial and tourist-related development has picked up steam, will not have to be drained or lowered during the process.

2. The project was staggeringly ambitious.

3. It was designed by the best.

6. The Waco Bridge Co. was not to be trifled with.

10. It carried traffic for a century.

Eight bronze longhorns seen cavorting on Lake Brazos’ west bank for years have been rustled, so to speak, though they will return upon complet…

Engineers make their way back down after inspecting the cables on the Suspension Bridge.

Ducks swim near the Suspension Bridge, which is closed to the public while being renovated.

Engineers make their way back down after inspecting the cables on the Suspension Bridge which is closed to the public while being renovated.

A engineer walks over to look at the cables on the Suspension Bridge which to the public while being renovated.

The suspension bridge is closed to the public while being renovated.