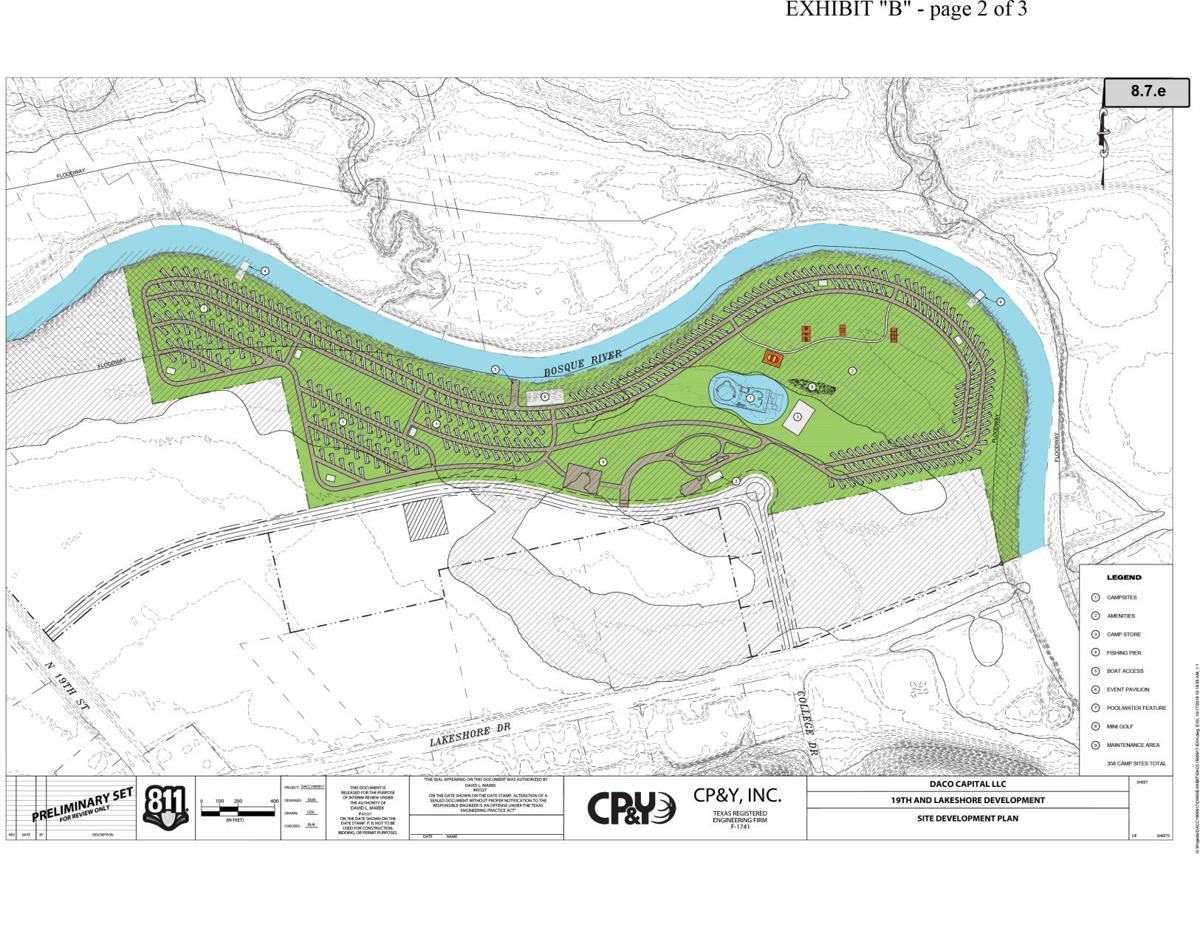 A map by CP&Y submitted by the developer shows the layout for the Bosque River resort.

A map submitted by the developer shows the extent of the resort between North 19th Street and Lake Shore Drive. 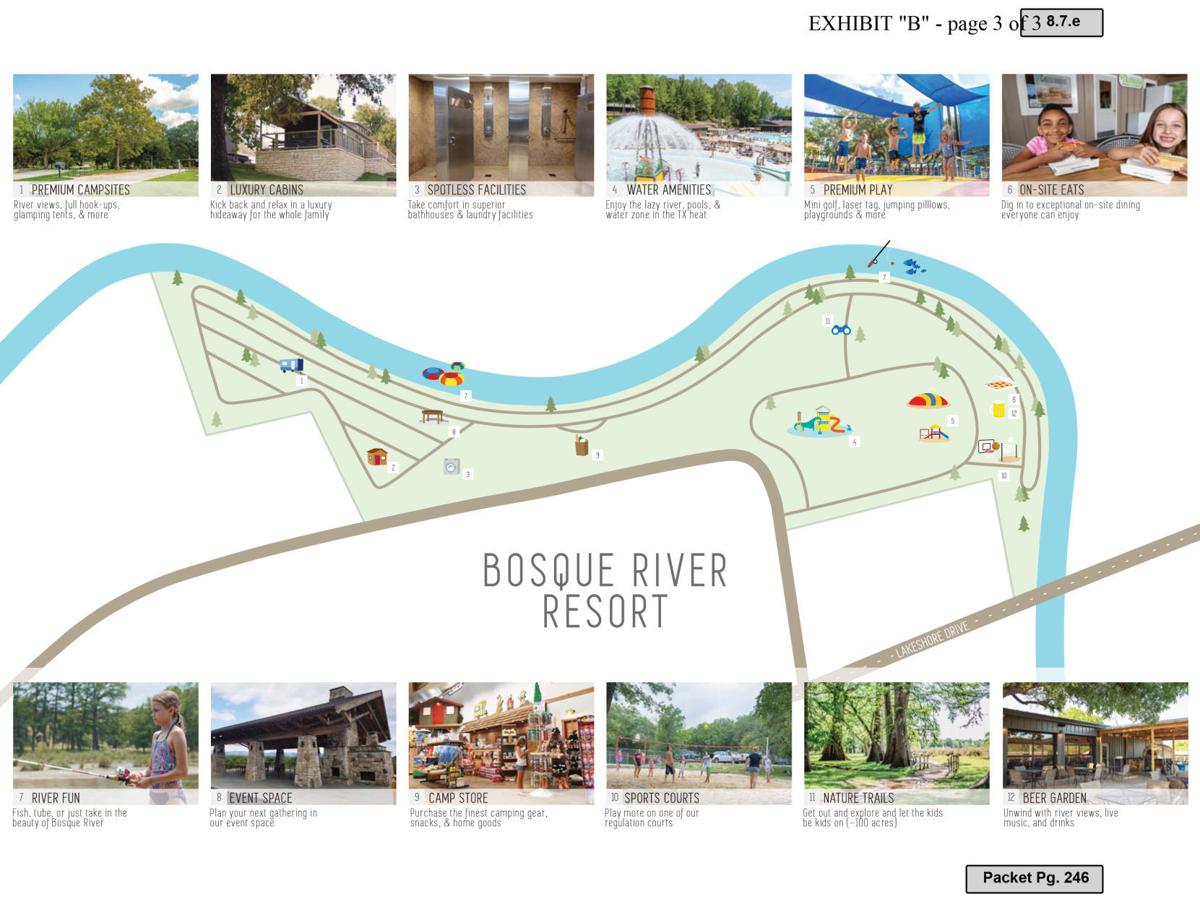 A map submitted by the developer shows an RV and cabin resort along the Bosque River.

The Waco City Council voted Tuesday to allow a camping resort along the southern bank of the Bosque River between 19th Street and Lake Shore Drive.

Northgate Waco, under their parent company Northgate Resorts, received approval for a special permit allowing a 100-acre resort with rental cabins and spots for recreational vehicles. The council vote was unanimous, but Councilwoman Andrea Barefield was absent.

Most of Northgate’s resorts fall under their Jellystone Park franchise, named for the fictional setting in Hanna-Barbera cartoons featuring the Yogi Bear character. Northgate Resorts CEO Zach Bossenbroek said it is undecided whether the Waco location would be a Jellystone Park.

“We don’t have a camp resort yet in this general market,” Bossenbroek said. “Rather than go farther north to Dallas, we really felt that the Waco market offered a lot of unique opportunities in terms of … Magnolia and the draw that they have. So there’s an unmet need at this point to cater to families with kids in sort of this outdoor, experiential environment that we think we can offer.”

DACO Capital LLC, a local company headed by Andrew Schmeltekopf, is buying 250 acres of property in total, 100 of which will house the resort. The CP&Y firm will design and engineer the operation.

Speakers for and against the measure filled the city council meeting. Attorney David Dickson spoke in favor of the project for 10 minutes, using time allotted to him by 10 other people in favor of it.

“The target market is families, families with small children, hence the cartoon bear,” Dickson said. “What it is not is a trailer park where people live, nor is it an amusement park.”

He said the pricing would dissuade people from living in the park, and all Northgate properties have strict rules against fireworks and firearms in addition to restrictions on alcohol and noise.

“It fits nicely with the tourism corridor that has really developed along Lake Shore [Drive],” Dickson said.

Councilman Hector Sabido asked whether an environmental study had been conducted on the project, and Dickson said one had been.

“We will depend on CP&Y to keep us out of trouble with the U.S. (Army) Corps of Engineers, who have jurisdiction over the river, and the city of Waco,” Dickson said.

Bossenbroek, the Northgate CEO, also spoke in favor of the permit, along with Alice Ogden, whose family owns property on North 19th Street.

“We feel their plans will be a good addition to the area and further promote Waco,” Ogden said.

Barbara O’Neal, who spoke in opposition to the measure when it went to the city Plan Commission, spoke in favor during the city council meeting. O’Neal said developers addressed some of her concerns when she met with them, but she still thinks the city needs to take steps to protect the river.

“I’ve lived on this river for over 70 years,” O’Neal said. “It’s been pristine. I want it to stay pristine, and I think the city has a responsibility to maintain that.”

Jeff Bird, who owns property on the northern bank, across from the site, said that portion of the Bosque is slow-moving and not suited to inner-tubing.

“I at least want it to be addressed, if that’s something we can do to limit that congestion,” Bird said. “I’m not against this project. I think it could be great for Waco. I just hope we think about this carefully.”

Natalie Risinger spoke in opposition to the permit. She said the Lake Waco dam is a big complication and an “elephant in the room” no other speaker had addressed.

She said the risk of a failure would always loom over the development.

“The dam is in good shape, but will it always be in good shape?” Risinger said. “To place this beautiful thing on the edge of the Bosque River, knowing that floods would come … I really want you to think about it.”

Eric O’Neill, who lives across the river from the site, said the environmental toll would be too great, and there is no way of preventing rowdy parties at the resort.

“Once this is built, Waco will never be able to recover again,” O’Neill said.

“We would have to stay on top of that, whether there’s any notification or not,” Dickson said.

Part of the development is in a floodplain, and the cabins would be on wheels, allowing them to be moved to safety relatively quickly, he said.

Councilman Jim Holmes said he appreciates the project’s planned connections to other attractions along the Brazos nearby. It has the potential to bring in tourists who might not otherwise visit Waco, Holmes said.

“This project checks a lot of boxes for me,” he said. “The complementary nature of this project with what’s going on in that particular part of town is pretty powerful. I think it’s important we have this kind of activity and connectivity.”

Councilman Dillon Meek agreed, saying the city should continue to invest in tourism.

“I think this is an exciting opportunity that can help expand the breadth of that industry,” Meek said. “I’m excited for it.”

The Plan Commission recommended approval of the special permit on several conditions, including a traffic impact analysis for the area and a tree survey that would prevent the resort from destroying certain kinds of trees along the river. The commission also recommended a requirement for downward-facing lighting designed to minimize light pollution from the resort, among other requirements.

“It really does address a lot of the concerns the public would have about something like this and ensures it will be high quality,” Meek said.

WH: Omicron variant found in 20 countries, not US

A map by CP&Y submitted by the developer shows the layout for the Bosque River resort.

A map submitted by the developer shows the extent of the resort between North 19th Street and Lake Shore Drive.

A map submitted by the developer shows an RV and cabin resort along the Bosque River.