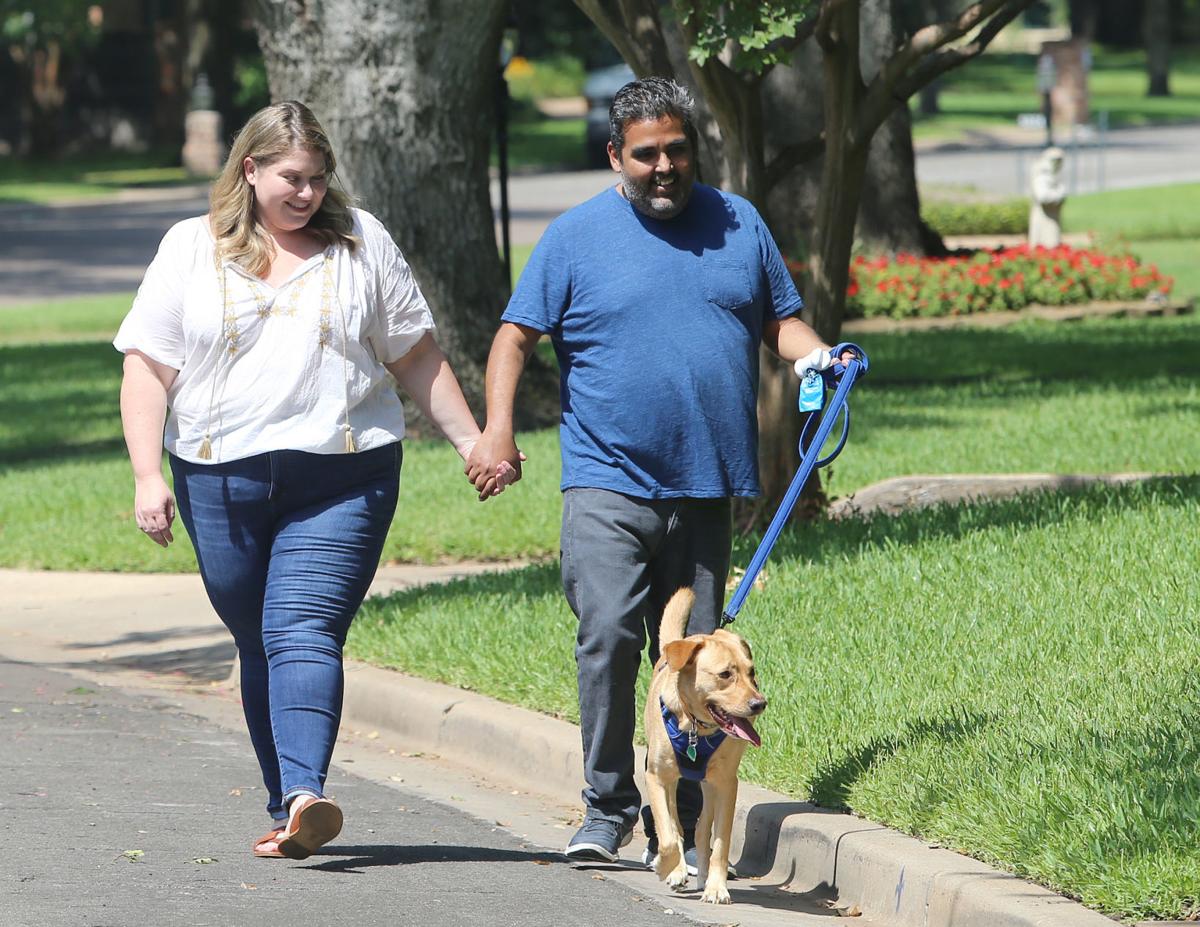 David Guel and his wife, Lauren, walk their dog, Springer, who was a at their side for the walks that grew in duration as David went through five weeks of rehabilitation following a 31-day hospital stay with COVID-19. 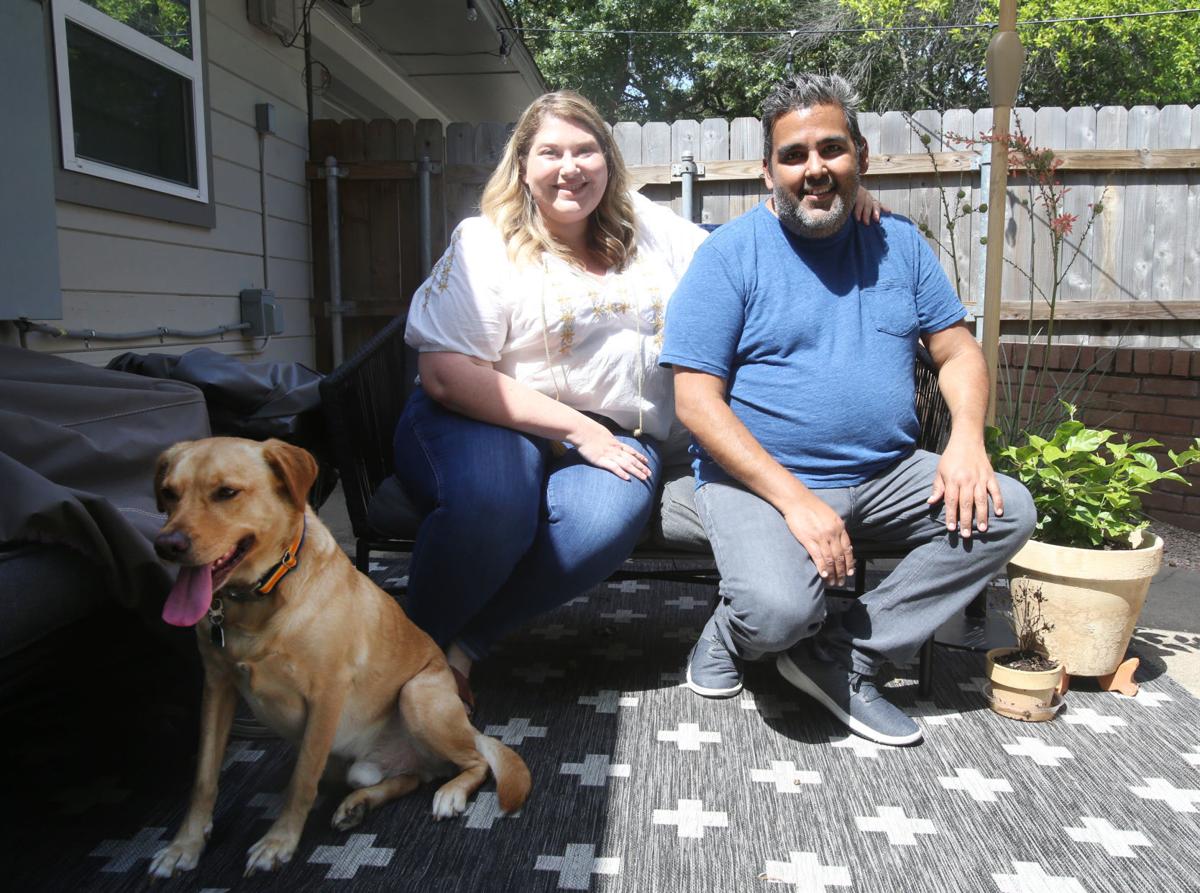 David Guel and his wife, Lauren, sit in the backyard with their dog, Springer. 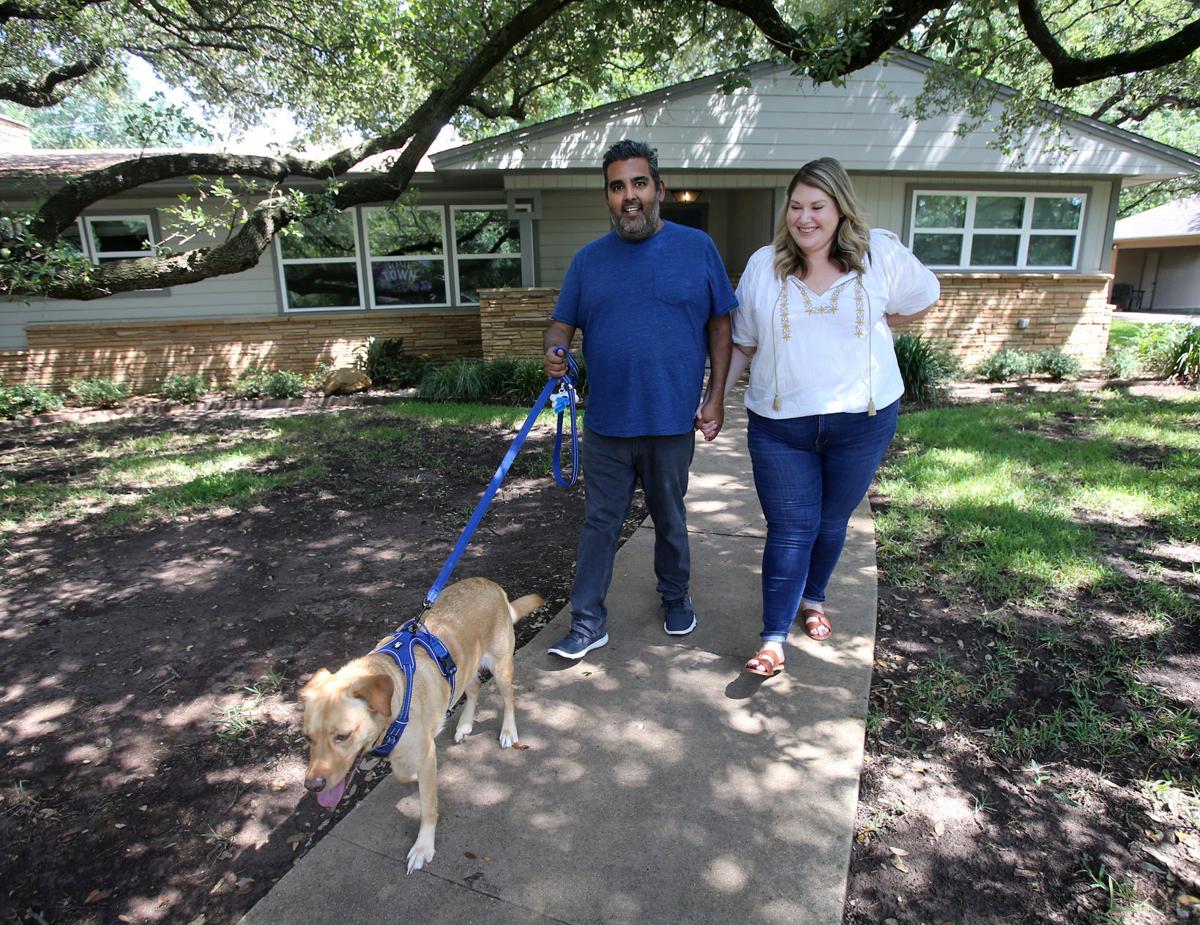 David Guel and his wife, Lauren, walk their dog, Springer, who was at their side for the walks that grew in duration as David went through five weeks of rehabilitation following a 31-day hospital stay with COVID-19.

The first thing nurses handed David Guel besides water or ice chips after he spent 16 days on a ventilator with COVID-19 was apple juice.

Now he is hooked on the stuff, and he didn’t even like it that much before he got sick.

“My cravings were not for food as much as something to drink,” Guel said. “I just wanted refreshing cold things to drink. I think my body was thirsty. The apple juice was my first drink that was not water and now I just crave it, and I never was a big apple juice guy at all. The nurse handed it to me and I thought, ‘This is the best thing I have ever had in my whole life.’”

Guel, a 45-year-old Connally High School world history teacher, is thankful to announce he is fully recovered from his life-threatening bout with the coronavirus. Two months after his release from a 31-day hospital stay, the main lingering evidence that he was sick is an unexplained scar on his forehead, his new affection for apple juice and an estimated $230,000 worth of medical bills.

Guel said the small scar on his forehead, which he calls his “Harry Potter scar,” might have come from an allergy to medical tape or from rubbing his head on the hospital bed railing when they flipped his roto-bed over so he was face-down to ease his breathing.

“I kind of felt like a rotisserie chicken in that bed,” he said with a laugh.

However the scar got there, it is the least of his worries at this point.

Now, David Guel is looking forward to resuming his teaching career — whenever or whatever form that might take — and is thankful for his students and Connally High School teachers and administrators who prayed for him and expressed their concerns, especially during his medically induced coma.

David’s wife, Lauren Guel, also battled a case of COVID-19, but her case was not as serious as her husband’s, whose hereditary liver condition made his symptoms much worse. The couple will be married a year in November.

“I didn’t have to be hospitalized,” said Lauren Guel, who works at home as a loan service officer for the Federal National Mortgage Association, commonly known as Fannie Mae. “I had the classic symptoms, a dry cough, body aches, a low-grade fever, fatigue. I was pretty much down for two-and-a-half weeks. I lost senses of taste and smell, lost my appetite, was not eating much. I just tried to keep fluids in my body. It was like having a bad case of the flu but having it for two weeks or more consecutively.”

The couple have friends who have had milder cases and were better in four or five days, Lauren said. Then there was David, whose brush with death had Lauren, family members and friends hoping at times merely for small signs of improvement.

“Obviously, this is a new disease and we are still learning a lot,” David said. “But our doctors tend to think we have antibodies now and likely are immune from getting it again. They are not saying 100 percent, but saying 80 to 90 percent, just based on how viruses work in general.”

Lauren has donated plasma twice, which will be processed and used to help COVID-19 patients who are critically ill fight the disease. David asked about donating but was unable to because of his underlying health conditions.

“We joke that we are probably immune now,” David said. “We are still extra cautious. We wear masks when we go out and we have yet to eat in a restaurant. One, we are trying to be responsible to other people, and two, we are being extra cautious. We are not trying to tempt fate.”

David underwent five weeks of rehabilitation when he got home, slowly building back his strength and lung capacity. At first, just getting out of bed and taking a shower had him gasping for breath. They walked inside the house at first, then down the driveway, and later, down the block, all the time with trusty Labrador Springer, named for Houston Astros outfielder George Springer, at their side.

All the bills have not come in yet, but the couple said they have received estimates that the total for David’s treatment, hospitalization and rehab will run about $230,000. Luckily, they have good insurance through Lauren’s work, and their maximum out-of-pocket expenses will be $3,300, they said.

David, who started working at Connally after the school year had begun when another teacher got sick, is thankful for his co-workers, who he said were very supportive in filling in for him and helping keep his students informed about his progress.

“David is a great teacher, especially for coming in mid-year,” said Jill Talamantez, former Connally High School principal who is moving to chief human resources officer. “He just took the bull by the horns and went straight forward. The kids really embraced him, and he has a way of bringing history to life. I am so very thankful that he is back 100 percent.”

After David became ill, Michelle Castelli, head of the high school history department, took over his classes, which shifted to online learning after spring break.

“David has a heart for the kids,” Castelli said. “He really cares about our kids. He has unparalleled patience that is absolutely needed when you are a teacher. He is an excellent teacher. He is smart, intuitive, but overall the best thing teachers can possess is love and patience, and he has that in spades. He is a wonderful fit for Connally and he is really going to make a difference with our kids.”

A man hauling cattle was killed when his truck and trailer overturned late Saturday night and led to second crash shortly after, authorities said.

David Guel and his wife, Lauren, walk their dog, Springer, who was a at their side for the walks that grew in duration as David went through five weeks of rehabilitation following a 31-day hospital stay with COVID-19.

David Guel and his wife, Lauren, sit in the backyard with their dog, Springer.

David Guel and his wife, Lauren, walk their dog, Springer, who was at their side for the walks that grew in duration as David went through five weeks of rehabilitation following a 31-day hospital stay with COVID-19.