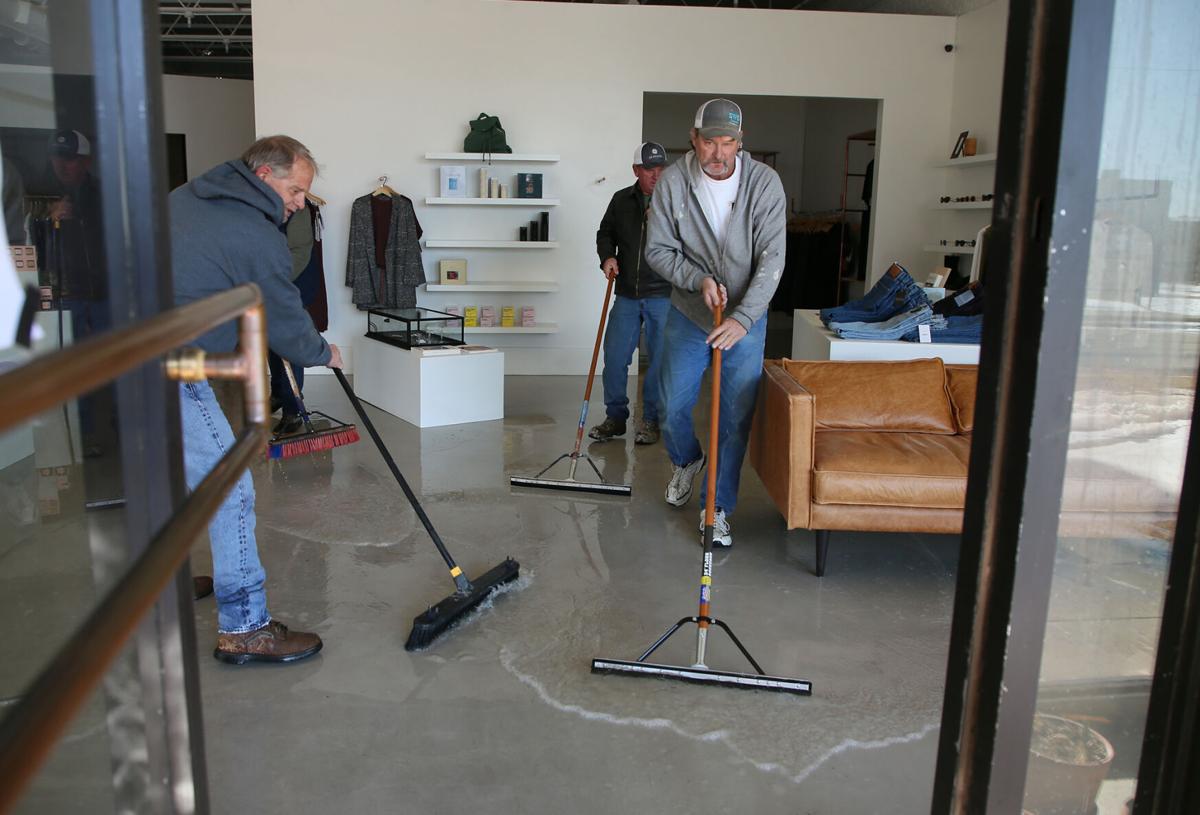 Workers at Wildland Supply Co., a retailer at 721 Washington Ave., clear out water from a broken pipe Friday morning. 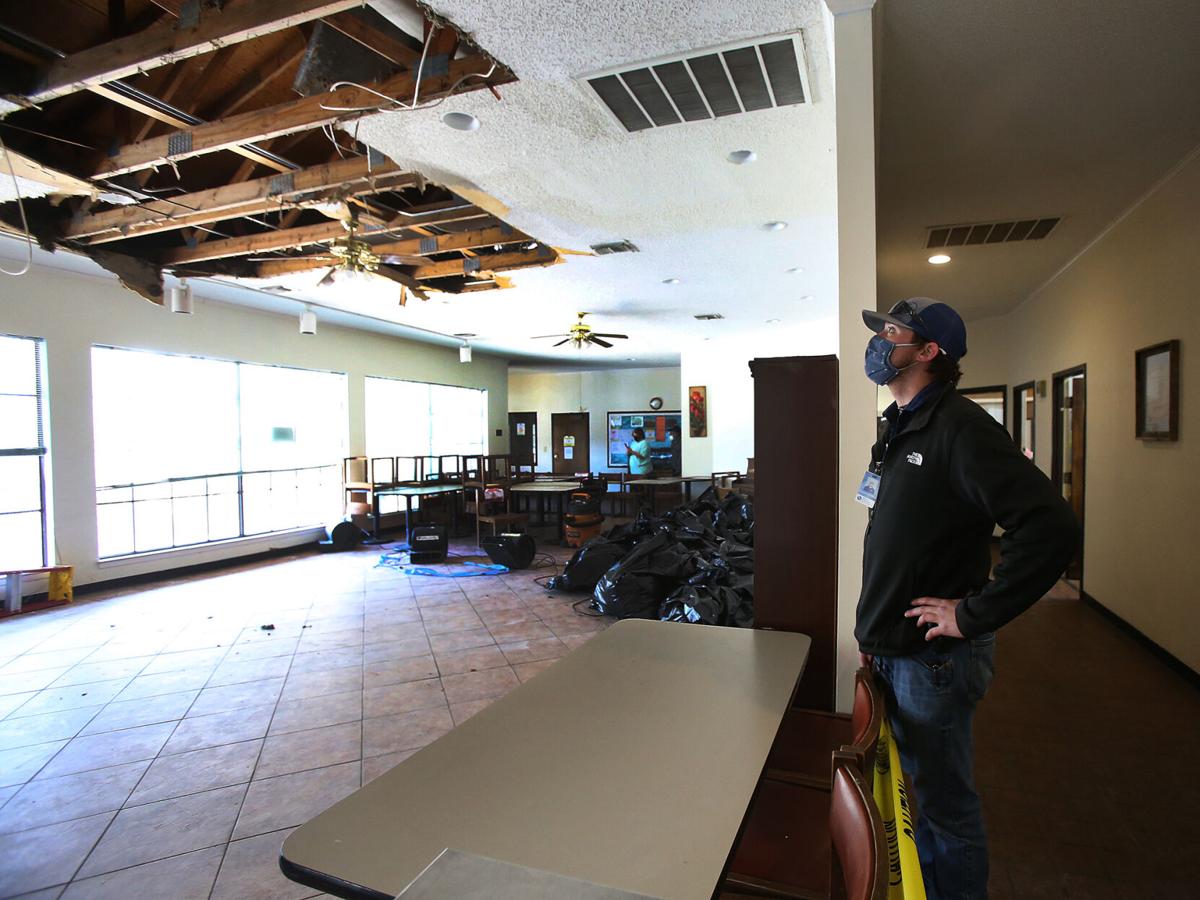 Branson Redding with Specialty Restoration of Texas looks toward a ceiling damaged by a leaking waterline Friday in the dining hall at the The Salvation Army William and Catherine Booth Garden Apartments on North 19th Street. 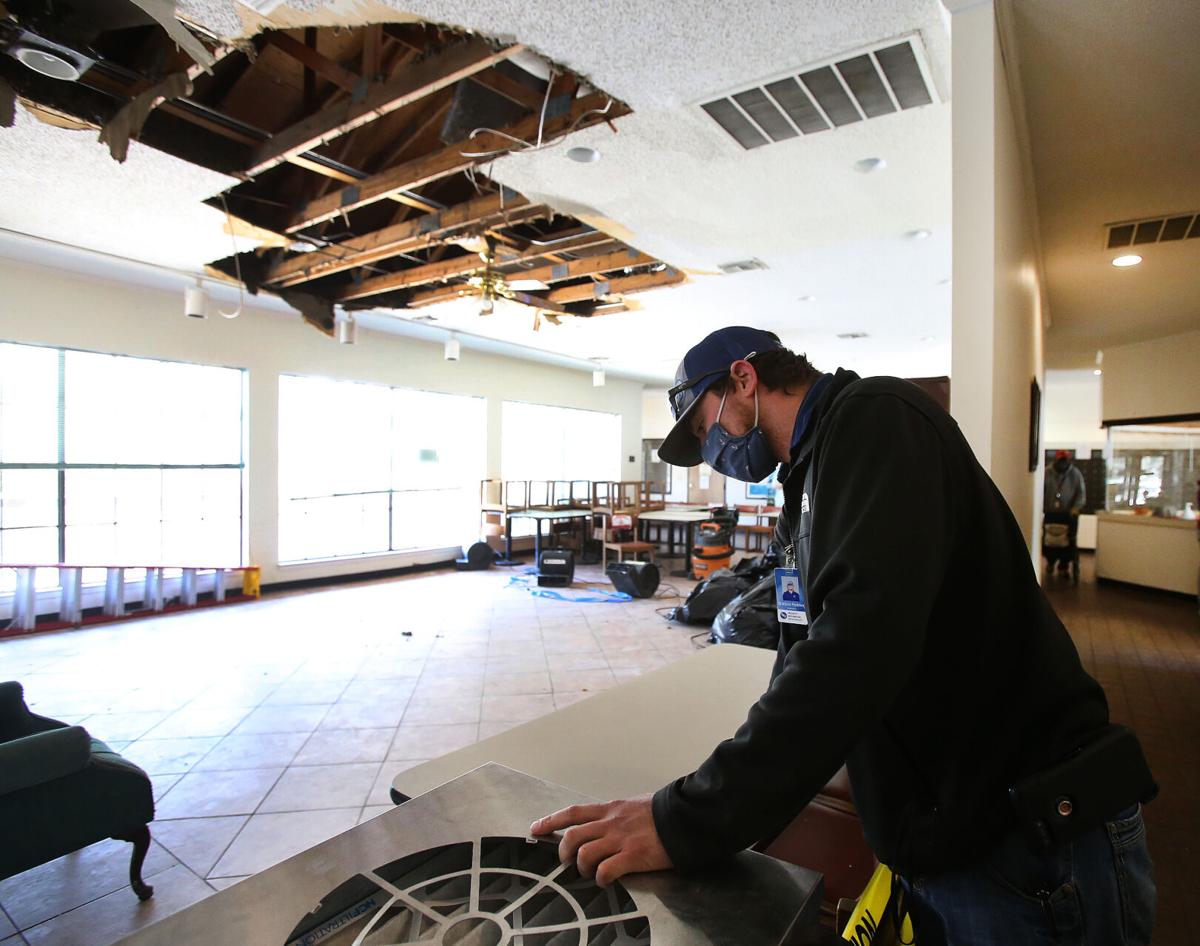 Branson Redding with Specialty Restoration of Texas checks on a dehumidifier Friday in the dining hall of the The Salvation Army William and Catherine Booth Garden Apartments, which suffered damage from a leaking waterline.

“It’s not been a good day,” Wildland owner Kate Duncan said. “We’ve not been able to leave the house due to icing on our street, but fortunately someone noticed water coming out our front door downtown. It was an inch-deep throughout the place. Most merchandise is fine because it was off the floor. I’m worried about the fixtures.”

Duncan’s women’s fashion store on Washington Avenue started taking on water courtesy of a leaky waterline at the building’s rear.

Talks have started with Duncan’s landlord and insurance agent.

While the warming temperature was a major factor in the Electric Reliability Council of Texas’ ability to return the power grid to normal operations Friday, it also meant more leaks showed up. The National Weather Service recorded a temperature of 32 degrees before 11 a.m. and a high of 41 later Friday afternoon at Waco Regional Airport. The forecast included a low of 20 Friday night and a high of 45 Saturday.

Texas Gov. Greg Abbott acknowledged the challenges homeowners and landlords would face as more of the state thawed out.

“Get plumbers lined up, and work with your insurance company in advance,” Abbott said in a press conference, as reported by the Texas Tribune.

The Texas Department of Insurance, meanwhile, urged property owners to take photographs of damage and keep receipts related to repairs.

“They’re all running full-time,” Alejandro said. “We’re trying to get to customers as fast as we can, but we’ve created a waiting list. We’re just now getting into some houses to assess the damage. I truly think this will last a couple of months.”

She said Mr. Rooter is setting aside two-hour blocks of time to complete calls. Typically that is sufficient, but not always, Alejandro said.

He estimated Staas had responded to 200 requests for service since Tuesday.

“It’s insane. There are frozen and busted pipes all over,” Cornerstone Plumbing office manager Glorianna Urubek said. “It’s all hands on deck here. We have five or six crews, each with two or three people, working all hours. It started last weekend. Sunday and Monday were the absolute worst.”

Urubek urged homeowners to mitigate danger to their pipes by running hot and cold water 5 to 10 minutes before going to bed, leaving a faucet dripping throughout the night, and opening cupboards to expose pipes to heating.

The business is playing catch-up, having not responded to calls earlier in the week due to inclement weather, Saulters said.

She said problems with pipes and tankless water heaters are most pressing.

Plumbers warn that thawing may pose increased threats to pipes, as water newly released may exert pressure on weakened areas.

Katy Redding, spokesperson for Specialty Restoration of Texas, whose five offices include Waco, said the company has been fielding 200 calls a day. A significant percentage involve clients whose sprinkler systems malfunctioned.

“These systems are hard to turn off and flush out,” Redding said.

She said timing is a priority for remediation crews that start removing water as quickly as possible to reduce or eliminate mold growth. Entities in need of assistance this week have included government buildings and golf courses, Redding said.

The business has temporarily closed for repairs.

The Mayborn Museum also announced Friday afternoon it would remain closed through the weekend, “to assist with city-wide water conservation efforts and to further assess the impact of the severe weather on the museum. The Harry and Anna Jeanes Discovery Center sustained some damage due to frozen pipes. The museum’s collection and Natural Science and Cultural History wing have not been harmed.”

Insurance Council of Texas spokesperson Camille Garcia told the Texas Tribune she expects hundreds of thousands in insurance claims to be filed in the wake of the ice storm that has paralyzed most of Texas. She said the claims will originate with homeowners, renters, business owners and vehicle owners.

Meghan reveals she had suicidal thoughts

Police have made a third arrest in the shooting death of a 21-year-old man in South Waco in September.

An 18-wheeler from Tyson Foods delivered a to-go order Thursday before the roosters crowed, barreling into the Guess Family Barbecue parking l…

The Waco-McLennan County Public Health District is distributing COVID-19 vaccines to the public as they become available.

Workers at Wildland Supply Co., a retailer at 721 Washington Ave., clear out water from a broken pipe Friday morning.