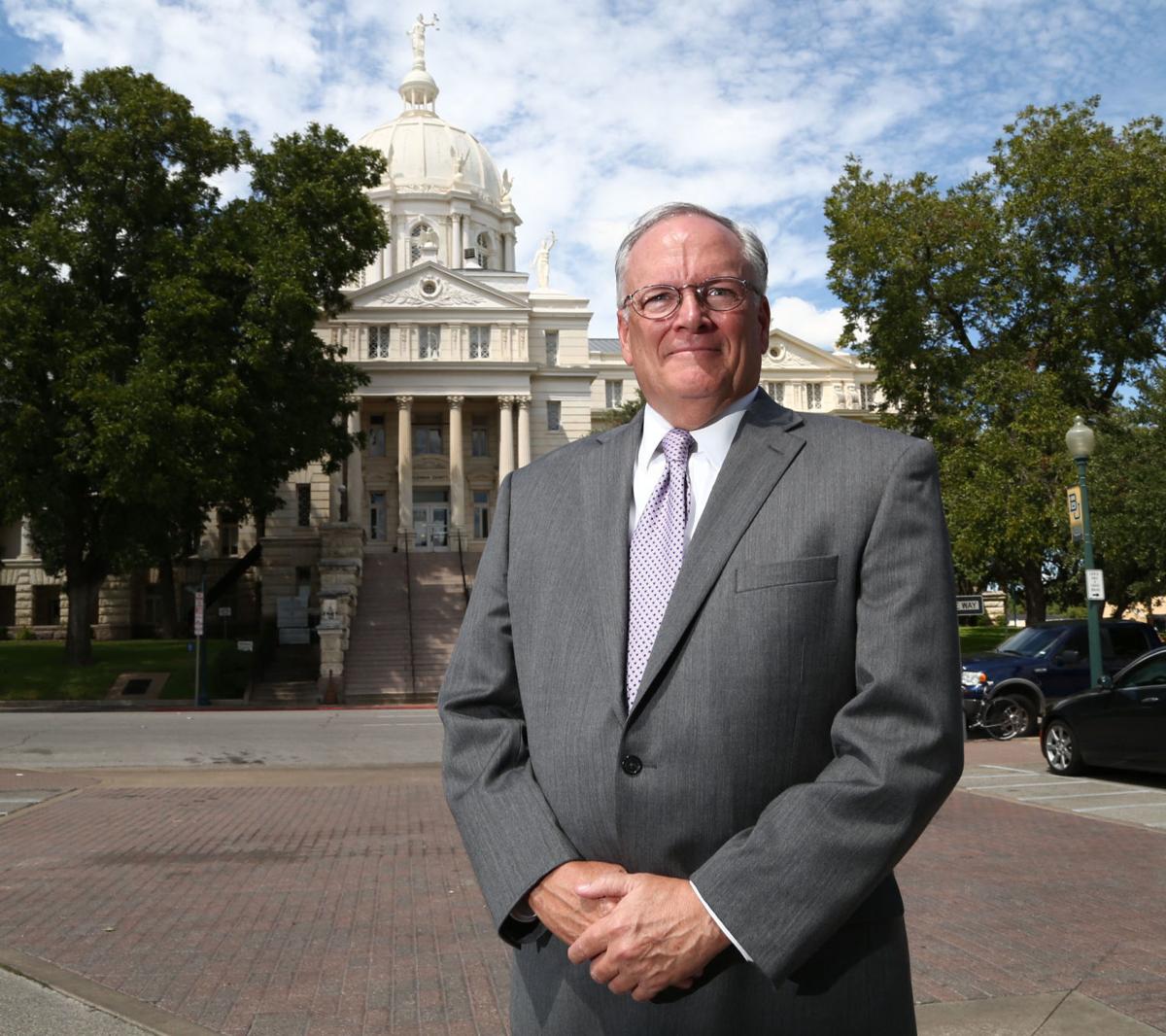 Barry Johnson is making plans as the beginning of his term as McLennan County district attorney nears. 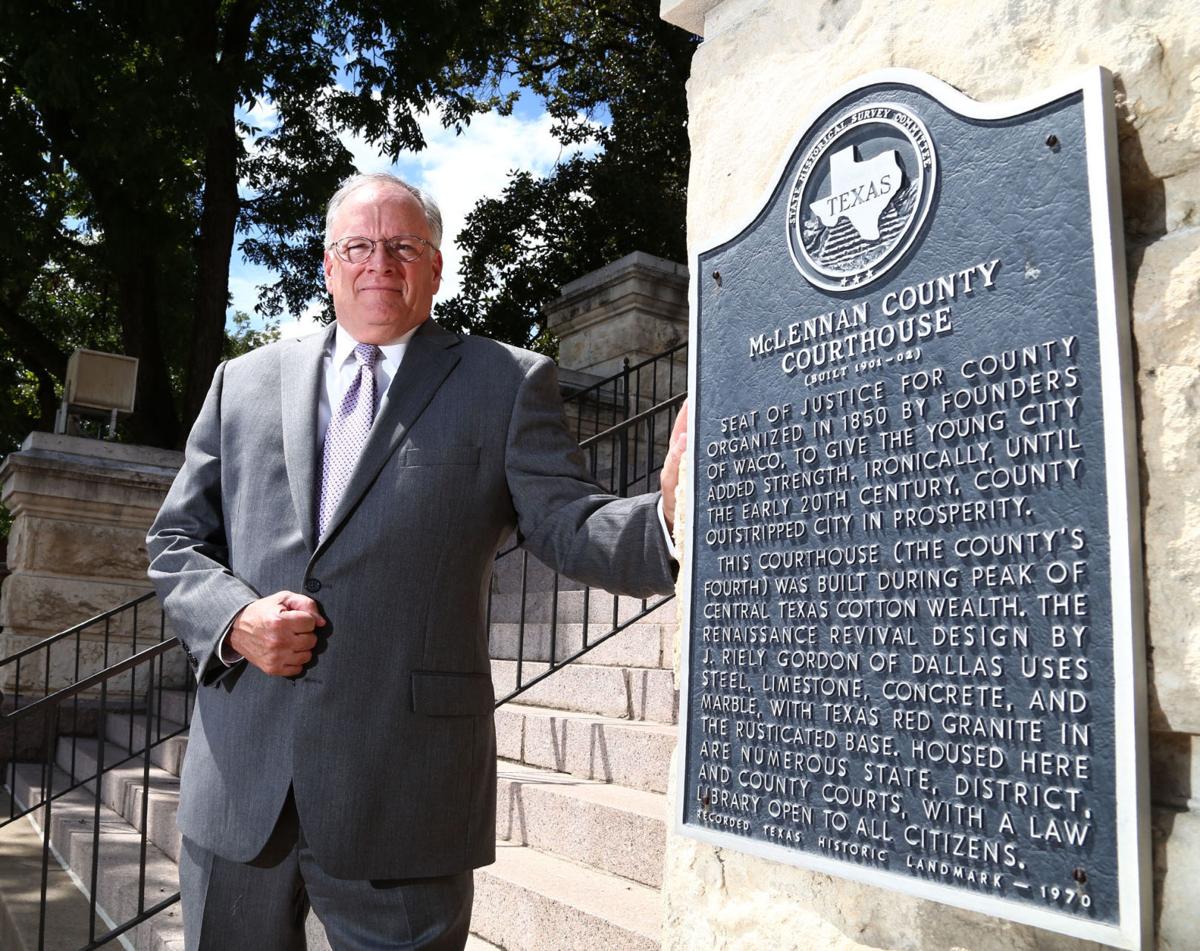 Barry Johnson poses in front of the McLennan County Courthouse, where his father, Joe Johnson, was a longtime judge.

Now that Barry Johnson is certain to be the next McLennan County district attorney come January, he’s exiting the campaign trail and focusing on the challenges of his new job, which will include resolving the backlog of Twin Peaks biker cases.

Democratic nominee Seth Sutton suspended his campaign in February but didn’t get his name removed from the November ballot until last month. Taking no chances, Johnson had been pressing the flesh at chili suppers, waving from cars in parades and staying in the public eye as much as possible.

Now officially unopposed, Johnson has been spending more time visiting with elected DAs in counties comparable in size to McLennan County to gain insights into the job, pondering his future staff and ways to heal fractures between the current DA’s office and law enforcement, the local bar and the media.

“(Waco Police) Chief (Ryan) Holt is a friend of mine and I plan to reach out to him soon,” Johnson said. “How in the world do you have a district attorney’s office and you have 250 police officers at Waco PD and they don’t like the DA? That has got to be solved. They are your right arm as a district attorney, and it is my responsibility as the DA to make sure we have a good relationship. We have to get along. That is vital to making this thing work.”

Johnson soundly defeated two-term incumbent Abel Reyna in the March Republican primary. The two ran into each other last month after McLennan County Judge Scott Felton invited Johnson to sit in on a commissioners’ meeting when they were considering the DA’s office budget. He said they shook hands and Reyna offered to meet with him and help in the transition.

“I appreciated that,” Johnson said. “I want to do my part, certainly, to make the transition a smooth one, whether Mr. Reyna and I visit or have contact or not.”

As he has said throughout his campaign, one of the first things Johnson wants to do is to assemble a team to review the remaining 24 Twin Peaks cases, which have been pending now more than three years with only one trial, which ended in a mistrial, being concluded.

Judge: No Twin Peaks shootout cases to be held in his court under DA Reyna

A judge, who said Friday he has been “troubled by the whole Twin Peaks matter from its incep…

Last month, 19th State District Judge Ralph Strother postponed what would have been the second Twin Peaks trial because he said he was concerned that Reyna’s office turned what normally is a Class B misdemeanor riot charge into one in which the defendants are facing life in prison.

The judge said he wants to wait until Johnson assumes office in January to allow him to review the riot charges that Reyna’s office brought against the two dozen Twin Peaks defendants to supersede the engaging in organized criminal activity indictments initially filed against 155 bikers.

Reyna dismissed all but 24 of the 155 cases after vigorous challenges by defense attorneys and threats to put Reyna on the witness stand amid court filings calling Reyna’s ethics and his criminal culpability into question. Three additional cases are being handled by special prosecutors because Reyna recused his office from them.

“The police officers and the law enforcement people I have talked to are of the same opinion, and that is that there are probably four or five murder cases out of those Twin Peaks cases, maybe one or two more, and to me, those are the ones you have to concentrate on. Those are the ones I want to try, if there is a probability of us winning,” he said.

Johnson said that he, like Strother, has concerns about the superseding riot indictments.

“I am going to meet with my prosecutors, and they are going to have to convince me that this riot cause of action is a viable cause of action and that we have a probability of winning these cases,” Johnson said. “I think the citizens of this county are worn out with Twin Peaks. They are fatigued, and I don’t think the county wants to spend any more money tilting at windmills.”

Johnson had hoped that Waco police Sgt. J.R. Price, a 40-year veteran who oversees the Special Crimes Unit, would join his team to review the Twin Peaks cases.

“He was out there,” Johnson said. “I am told he is one of the best crime scene investigators in this part of the country. I really wanted to ask him if he could be part of the team that I am going to put together on Day 1 so I can get in there and start looking at those cases. He told me, kind of disappointedly, ‘Barry, that case was taken away from us within a few weeks of us doing all this work.’ The DA just told them, ‘You are out.’

“There are all these detailed police reports, very detailed and well done, and then all of a sudden there is a time when it cuts off. There are no more Waco PD reports. J.R. was telling me that they are going to know more at the DA’s office than we do now because we were taken off the case,” Johnson said.

Johnson said judges and the DAs he has spoken to advised him to carefully screen cases and make the best plea offer possible upfront, before indicting a case if possible, to let defendants and their attorneys know that is the best offer they are going to get. That prevents them from riding the system in hopes of prosecutors caving in later. That also will help keep cases moving, they tell Johnson.

While the tough-on-crime rhetoric played well with voters, Reyna was criticized early by county officials and defense attorneys for his high plea offers, even for first-time offenders. They bogged down the system and clogged up the jail, Reyna’s detractors said.

Reyna has said he wanted the defendants to grow accustomed to accepting the higher offers, which he said are still less than McLennan County juries hand out in most cases.

“The first thing I hear from everybody, and this may be an idealistic point, but it is still important, and you hear it from judges and other DAs, is that you need to do as much as you can to investigate and try to see that it is a case to go forward with before you charge the individual,” Johnson said. “Judges are adamant. They say four years down the road, don’t make your best offer. If possible, make your best offer before they are indicted, make your best offer first and that will put some oxygen back in the courthouse and get things caught up.”

For example, three defendants in 54th State District Court on Monday were charged with assault — family violence. Two of them were habitual offenders, which made their exposure a minimum of 25 years in prison and up to life. The charges against the third were enhanced, bumping the offense up to a second-degree felony punishable by up to 20 years.

The first defendant, who has been in the county jail 508 days, was set for trial Monday but accepted a plea offer for three years in prison after prosecutors dropped the habitual designation.

The second defendant, jailed for 505 days, took a six-year offer on a weapons charge after prosecutors dismissed the habitual assault count. The third defendant, who has been in jail 309 days, was sentenced to three years in prison after reaching a deal with prosecutors after they dropped the enhancement paragraph.

Defense attorneys Rob Swanton and Michelle Tuegel said they hope the new administration will do a better job of screening cases before indictment and move cases off the dockets more quickly, although Tuegel said most attorneys think time is on their clients’ sides.

“We are in a situation right now where it is hard to get the cases resolved,” Tuegel said. “It might be a resource issue where they need more hands on deck to resolve cases. We hope with a new office and a new boss that there will be more motivation and resources for these prosecutors to get these cases moving. I think a lot of it is a result of being in transition and a change in the administration.”

Tuegel said she also hopes the changing of the guard will bring about better consideration of crime victims, not only by trying to resolve the cases more quickly, but by including them more in the decision-making process.

“I certainly would hope that with the new administration, we would see a more critical analysis of cases,” Swanton said. “I think that really taking a look at the strengths and weaknesses of a case before it is indicted it a great idea. I think they screen cases now, but I think there is a tendency to not see some of the weaknesses in the case.”

Swanton also said he would like to see “more openness” and better communication between the DA’s office and the defense bar.

“I can remember a time when it was easier to get access to sit down and talk to the DAs early on in a case and discuss whether a case would be filed, or to discuss other ways to handle a matter other than just seek an indictment,” Swanton said. “I think in the last few years, that has been more difficult.”

Swanton said he doesn’t think Johnson’s lack of criminal experience will be a factor. Johnson was a longtime civil plaintiffs’ attorney in Dallas.

“I think he will do a good job,” he said. “I think Barry can surround himself with good people, and while that may be a perceived weakness, it certainly does not have to be. I think he is a bright lawyer and is going to be able to handle the job.”

A biker arrested at Twin Peaks in 2015, who failed last month to get the riot indictment against him thrown out, is asking an appellate court …

Standing in front of a banner proclaiming “Justice and Fairness for All,” Barry Johnson on Thursday promised a new era of “honesty, integrity …

Barry Johnson is making plans as the beginning of his term as McLennan County district attorney nears.

Barry Johnson poses in front of the McLennan County Courthouse, where his father, Joe Johnson, was a longtime judge.