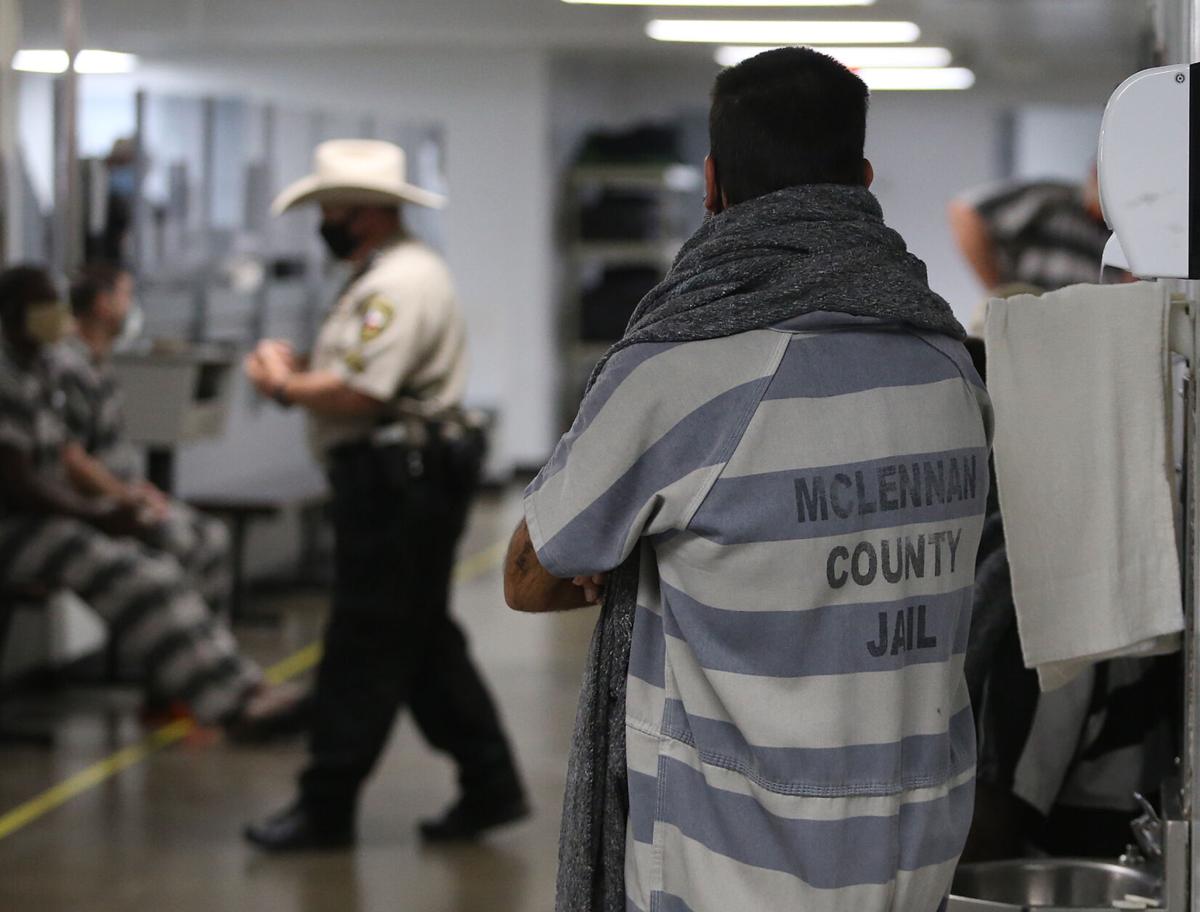 Inmates wait in the processing center at the McLennan County Jail. With criminal trials on hold and a recent spate of shootings, the county's jails are housing 36 murder or capital murder defendants and three manslaughter defendants. 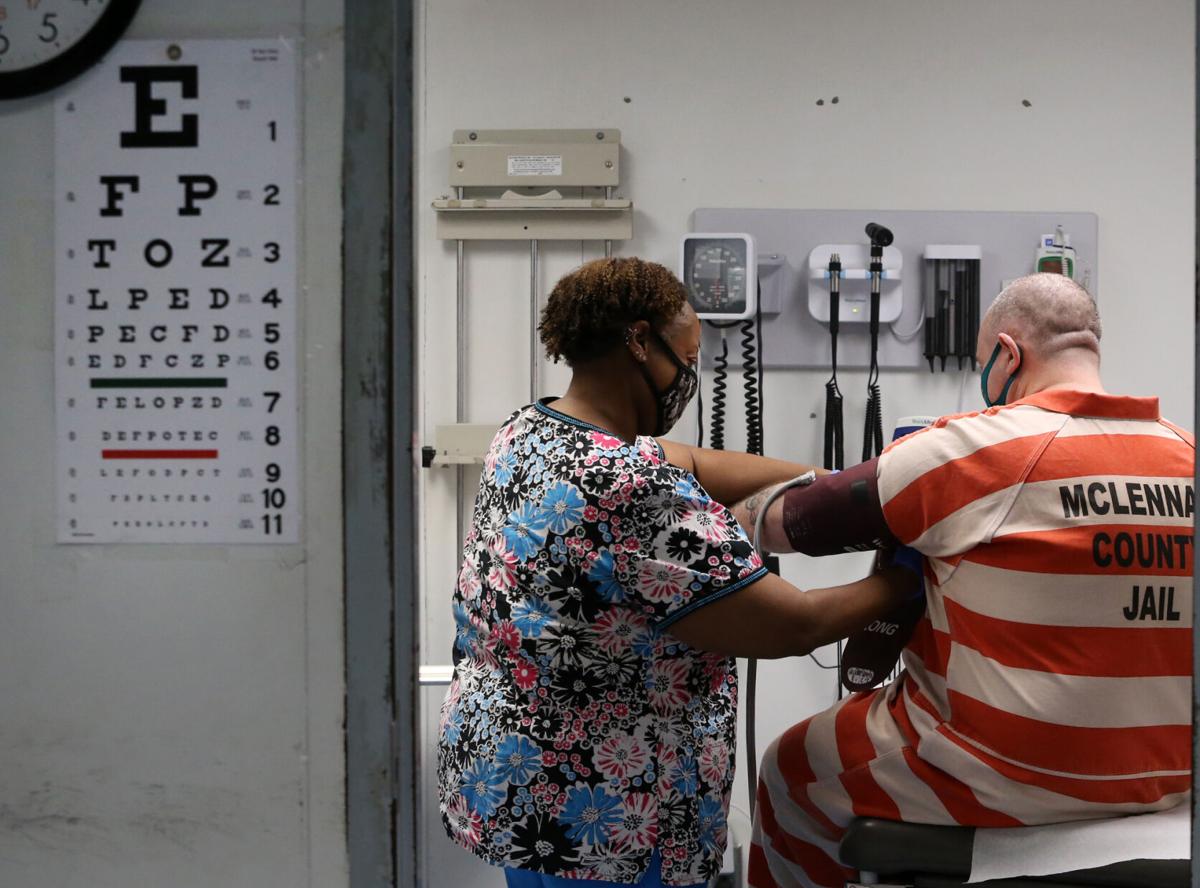 Nurse Ella Taylor takes an inmate’s blood pressure at the McLennan County Jail. Almost 190 inmates have been in the county jail more than a year. Many in the jail are waiting for progress on pending cases in a partially shut down court system, and many are waiting for transfer to a state facility. 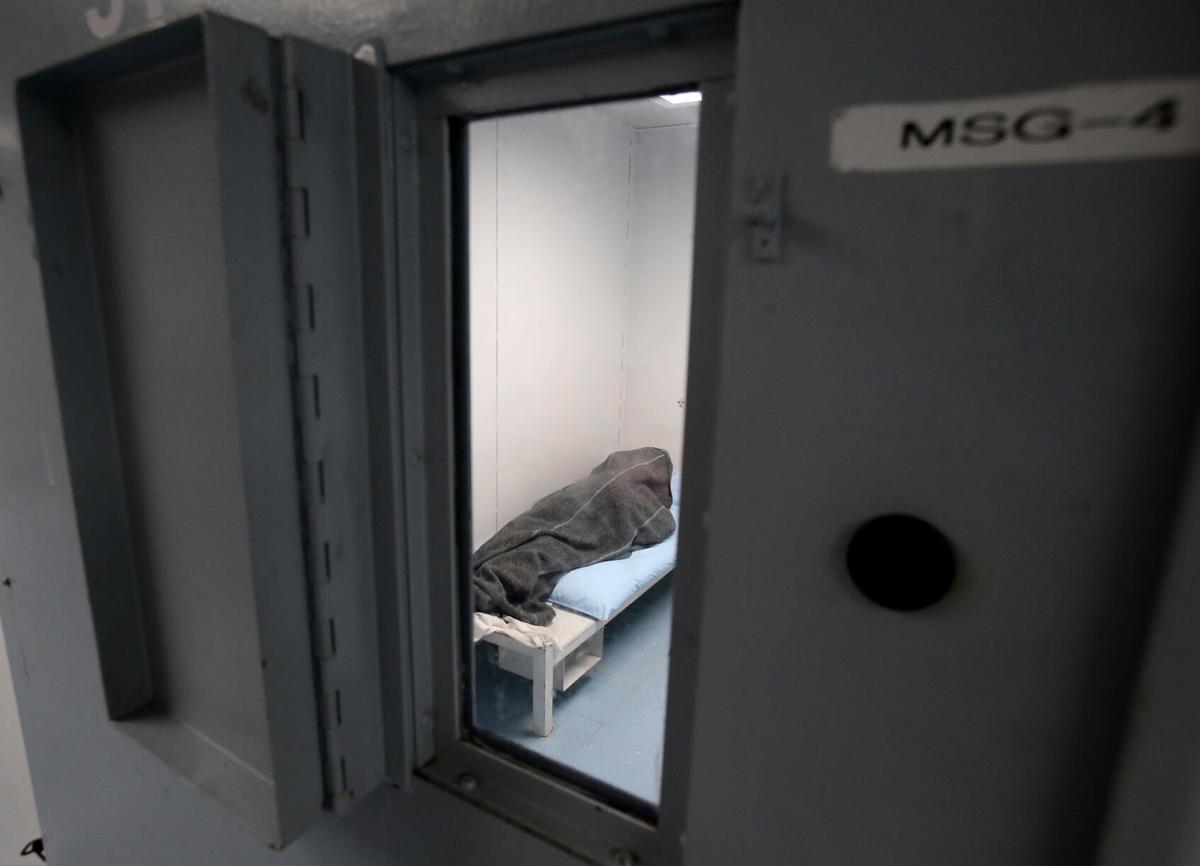 An inmate sleeps in his cell at the McLennan County Jail.

A recent spate of shootings in Waco and the ongoing pandemic have combined to cause an unprecedented number of murder defendants to stack up in the McLennan County Jail.

A total of 39 county jail inmates charged with causing violent deaths are waiting for their day in court, including a capital murder defendant who has waited more than three years in jail for the retrial of his case.

Of the 1,210 inmates who spent Thanksgiving in the county jail system, 12 are charged with capital murder, 24 are murder defendants and three have pending manslaughter charges, according to jail records.

“As far as murders and capital murders, I think that is the highest number we have ever had at one time,” said McLennan County Sheriff’s Maj. Ricky Armstrong, who oversees the county’s two jails. “We haven’t been able to get them into court and we have had a lot of shootings in Waco in the last 12 months.”

Besides those accused in deaths, Armstrong said more inmates — 187 — have been in jail for longer than a year than he has ever experienced as jail administrator.

Blame it on COVID-19, which shut down the courts and forced the state prison system to stop accepting prisoners ready for transfer from county jails from July to the start of last month.

“It caused us to back up on our inmates waiting to go to TDC,” Armstrong said. “It didn’t really grow because the courts had shut down, as well. We had those who had already been to court and had been sentenced, but that list didn’t grow, it just didn’t go down. The ones ready to go to trial are the ones sitting here just waiting. That is where our numbers have increased.”

While McLennan County courts have maintained limited dockets, there has not been a jury trial in Waco since February and officials have said trials will not resume at least until after the first of the year.

Among the more than 1,200 current inmates, 130 are considered state prisoners waiting to be transferred to prison, 800 are county inmates and about 260 are federal prisoners, Armstrong said.

Judges Matt Johnson and Ralph Strother, who preside over the county’s two felony courts, have watched their dockets steadily grow with regular grand jury sessions cranking out 400 new indictments a month. While both judges have maintained plea dockets, the lack of jury trials has removed incentives from the plea bargain process, slowed the system even more and prevented those insisting on trials from getting their day in court.

“I have two or three who are clamoring for getting their cases dismissed, but I don’t have anybody clamoring for their day in court,” longtime Waco defense attorney Russ Hunt said. “I think we are doing the very best we can, and that goes for all of us, the judges, the district attorney’s office, and certainly, the defense lawyers. We have to deal with the hand that we’ve got and that is what we are doing.”

Armstrong said he has not seen an overwhelming amount of impatience from inmates frustrated about not getting to court. He said they all watch the news and are aware of what is going on in the outside world. He said he thinks they understand that everyone is trying their best to deal with the pandemic the best they can.

Inmates facing potential prison time would just as soon stay in the county jail, where most are closer to family members and the conditions are better, Armstrong said.

“If you are facing a possible death penalty, you are not too interested in beating a path to the courthouse,” Strother said.

Strother, who is retiring at the end of next month, said the criminal justice system has been caught in a domino effect that has become a “descending spiral.”

“There are so many moving parts to this that when one part breaks, it is like having a complicated piece of machinery. When one small part breaks, it stops the whole works,” Strother said. “It is unfortunate. I am greatly disturbed about it. But the only way around it is for us to bite the bullet and simply resume operations, and that is not going to happen with the state of things we are in. The decision was made a long time ago about how to handle this, and once that narrative was set, that was it. The only thing to do now is to get a vaccine or everybody develop an immunity to COVID.”

Johnson, who will replace the retiring Justice Rex Davis on the 10th Court of Appeals in January, said the pandemic gave court officials “a choice between a bad option or a worse option.”

“There are no good options right now,” he said. “With the slowdown in the docket because of COVID-19, we have not been able to have a jury trial since February of this year and recently, there seems to be a number of arrests, followed by indictments, for the charges of murder and capital murder. With being unable to move the older cases and having an influx of new cases, it is unavoidable that we have got this situation on our hands.”

Albert Leslie Love Jr. has languished in the McLennan County Jail more than three years while waiting for his capital murder retrial. McLennan County District Attorney Barry Johnson took the death penalty off the table in June, and Love has rejected state offers to plead guilty to a life prison term with no possibility of parole.

Dates for the retrial have been postponed several times, even before the pandemic gripped the country, and no current trial date is set.

Is this the world's first fully robotic AI café in the world?

Is this the world's first fully robotic AI café in the world?

Inmates wait in the processing center at the McLennan County Jail. With criminal trials on hold and a recent spate of shootings, the county's jails are housing 36 murder or capital murder defendants and three manslaughter defendants.

Nurse Ella Taylor takes an inmate’s blood pressure at the McLennan County Jail. Almost 190 inmates have been in the county jail more than a year. Many in the jail are waiting for progress on pending cases in a partially shut down court system, and many are waiting for transfer to a state facility.

An inmate sleeps in his cell at the McLennan County Jail.