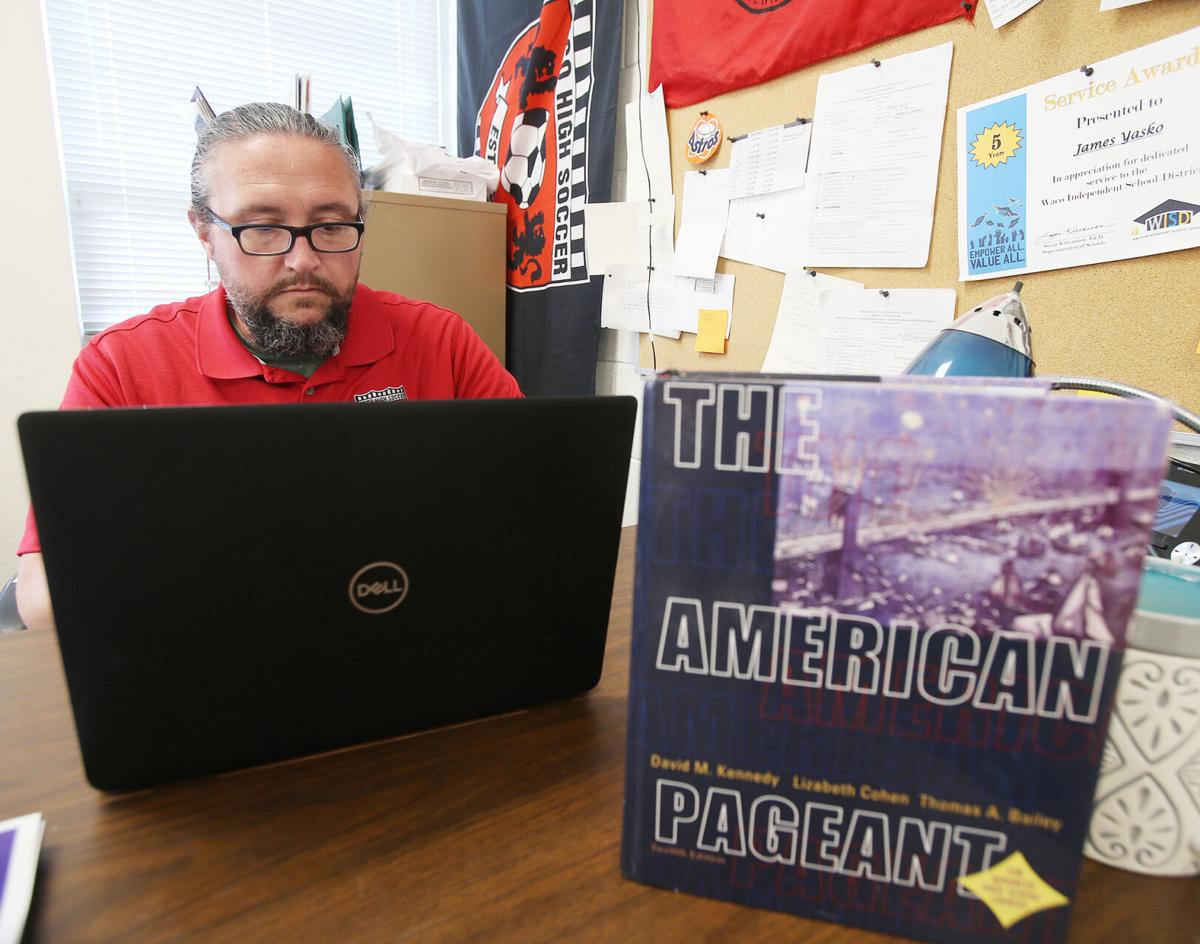 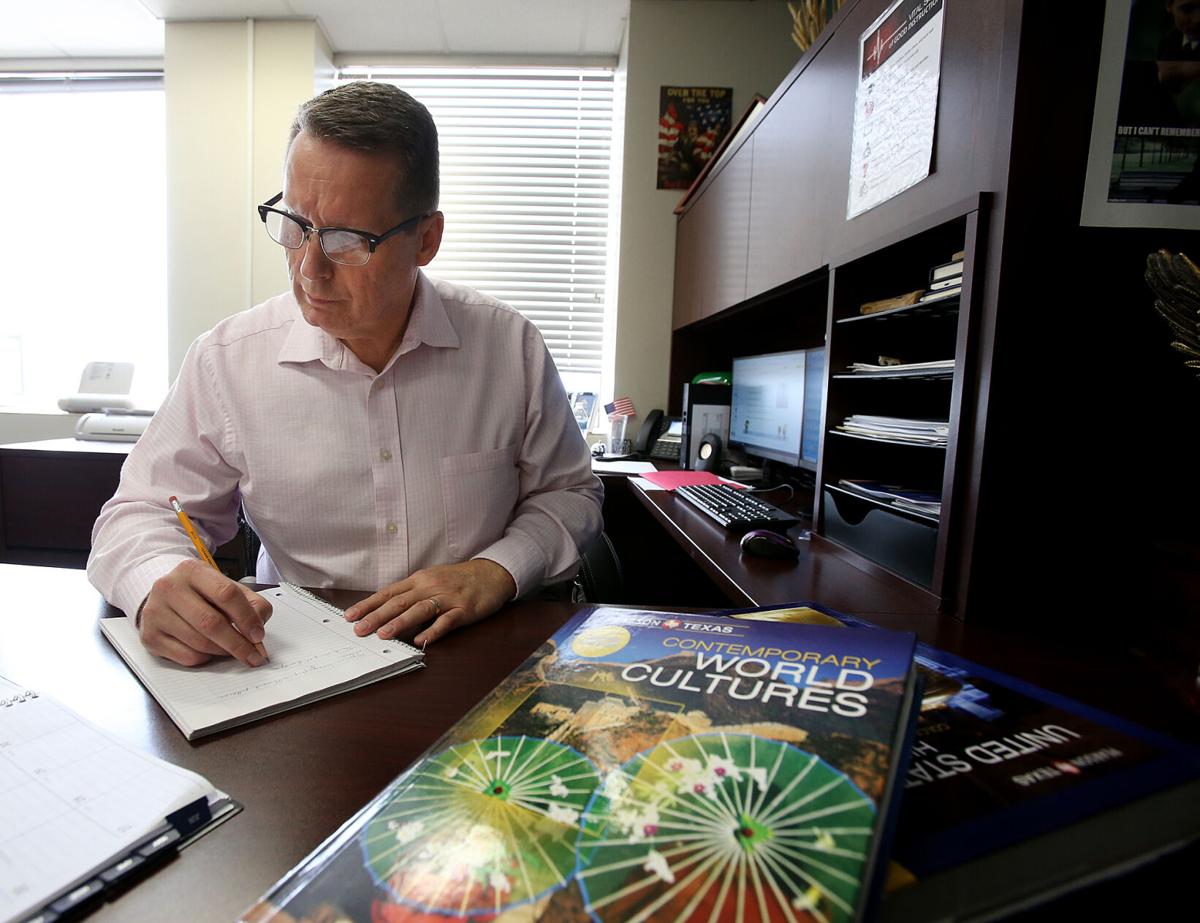 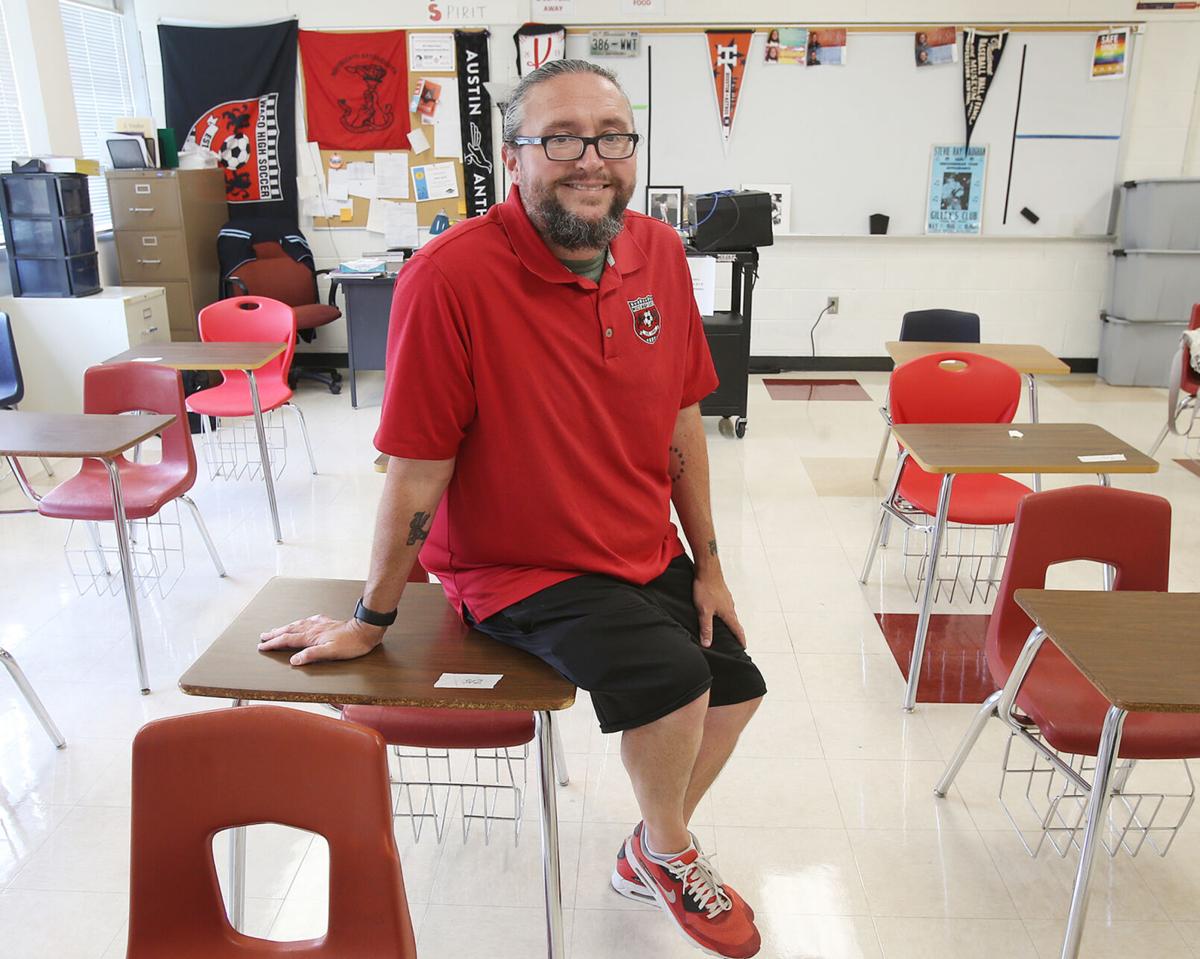 Waco High School American history teacher James Yasko notes that having students grapple with competing or past points of view is part of their education. “Teaching both sides of an issue helps develop good thinking skills,” he said. 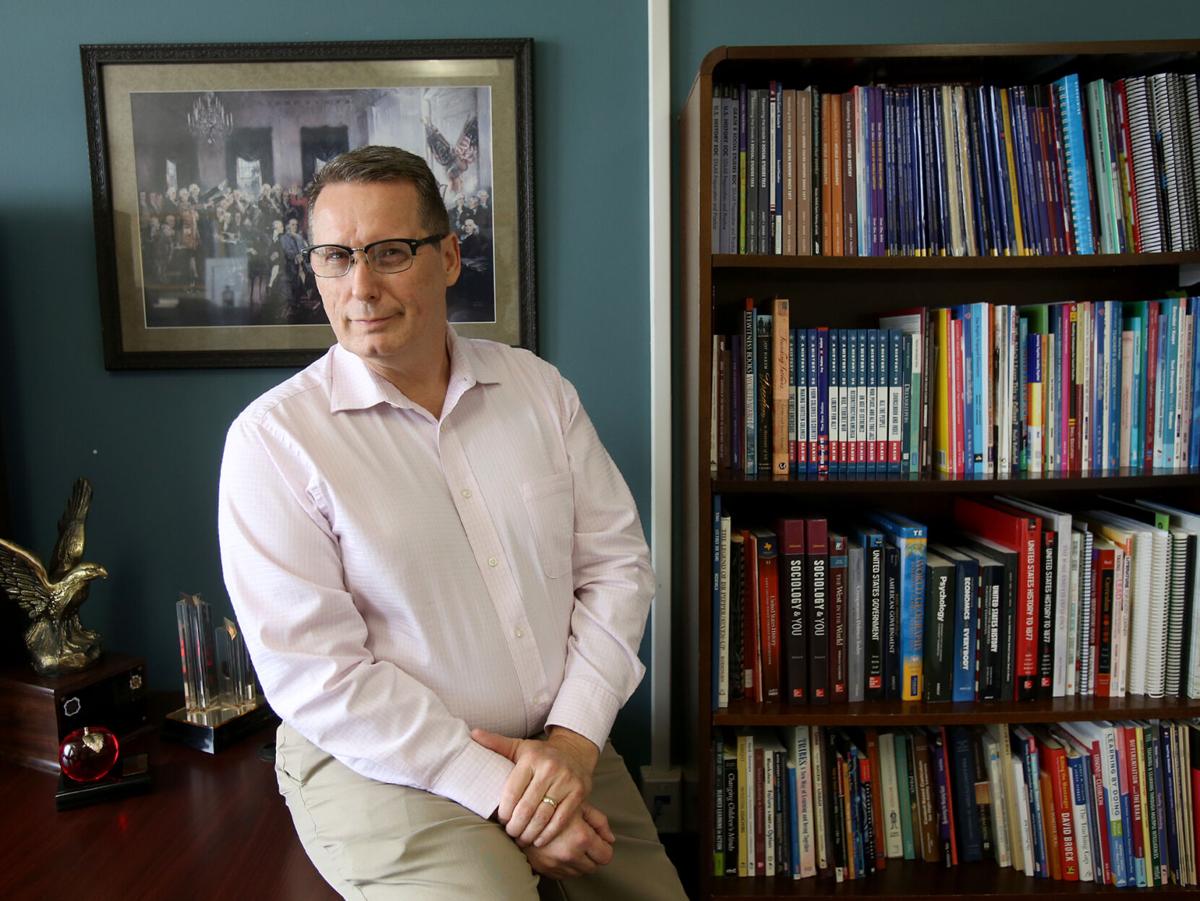 Texas and American history classes in Texas public schools will begin this fall with new state restrictions on how to teach topics such as slavery and racism, thanks to a state law passed in June.

The law, which advanced as House Bill 3979, requires social studies teachers to provide multiple perspectives on certain issues without preference, limit treatment of slavery and racism to no more than “deviations from” or “betrayals of” American founding principles, and avoid making individuals feel bad for their race or sex.

It limits student involvement in civics activities, makes The 1619 Project off-limits for student learning requirements, and allows teachers to opt out of discussing with their students any controversial current event or “issue of public policy or affairs.”

Waco history teachers, however, said the new guidelines will not appreciably change their teaching because existing state standards already call for teaching of multiple viewpoints on historical issues and encourage critical thinking among students.

“Basically, we follow the TEKS (Texas Essential Knowledge and Skills),” said Dan Pfleging, an American history teacher at University High School who is shifting this fall to duties as an instructional specialist in social studies for the Waco Independent School District, where he has worked for 24 years. “My U.S. history team looked at the draft (legislation) line by line for anything that could radically change what we teach.”

They determined long-standing curriculum guidelines on teaching students from multiple perspectives and how to analyze and evaluate sources mean not much needs to change.

“I share with my fellow teachers to stick to the TEKS,” Pfleging said. “We’re teaching the state curriculum, and how can you get in trouble for teaching the curriculum?”

“We’re beholden to the standards we are given,” Yasko said. “Our goal is for students to pass the test. Whatever the standards are, we’ll give it. … The TEKS are really good about incorporating the Hispanic and Black side of history, and the AP curriculum is extremely inclusive.”

Yasko is no stranger to navigating the pricklier points of history. Before his eight years as a Waco High teacher, he worked in museums, first at the Baseball Hall of Fame in Cooperstown, New York, then as educational director at The Hermitage, Andrew Jackson’s home near Nashville, Tennessee.

In its presentation of the seventh president’s life and legacy, the Hermitage acknowledged Jackson’s pro-slavery views and his efforts to force Native American tribes off their lands.

Having students grapple with competing or past points of view is part of their education, Yasko said.

“Teaching both sides of an issue helps develop good thinking skills,” he said.

Waco ISD Social Studies Coordinator Robert Glinski said the district makes sure teachers’ lesson plans align with state curriculum standards and provides support through instructional specialists, content coordinators and professional development sessions. While the state standards usually address content and the level of student engagement, from being able to identify a person or topic to explaining or analyzing, teachers have a certain degree of latitude in determining how to teach and determine student understanding, he said.

Overshadowing the new state law is a national, primarily political discussion of critical race theory, a high-level, largely legal theory developed more than a decade ago that argues how laws and organizations can have a racist effect even without their creators having a racist intent or knowledge of the effects.

Texas is one of five states where Republican legislators have passed laws targeting critical race theory. The Texas law does not mention critical race theory by name, though it does name The 1619 Project, a New York Times series that traces how slavery shaped the country from its colonial beginnings.

Another 15 states have proposed similar legislation, even as critics point out that few public school districts across the nation include it in their curriculum.

The intent of the state’s legislation to constrain discussions of racism did not escape members of the Waco ISD school board, who went on record May 27 as reaffirming the board’s intent “to act intentionally to dismantle institutional racism on behalf of the children and community we serve” and opposing any legislation that would hinder it.

Texas Gov. Greg Abbott signed the bill into law but felt it did not go far enough. He added the topic as an issue to address in the current called special session. Senate Bill 3, authored by Sen. Bryan Hughes, R-Mineola, would supersede the law, removing or replacing entire sections. It passed 18-4 in the Senate and awaits House action.

McLennan Community College English professor Peaches Henry heads the Waco NAACP. She finds much that is wrong in the anti-critical race theory legislation.

“The right wing is using CRT as a catch-all phrase. … (It’s) taught at the graduate level and usually at law school. It’s certainly not taught at K-12 and they know that. It’s really about controlling the narrative,” she said.

By linking critical race theory to other topics of social discussion such as systemic racism, institutional discrimination, police use of force and more, its opponents can curb activists arguing for change in those areas, Henry said.

Conservative activist Christopher Rufo, a senior fellow at Manhattan Institute and vocal opponent of the scholarly theory, seems to agree. In a widely circulated March 15 social media post, he tweeted, “The goal is to have the public read something crazy in the newspaper and immediately think ‘critical race theory.’ We have decodified the term and will recodify it to annex the entire range of cultural constructions that are unpopular with Americans.”

Henry teaches English and composition and said limiting students’ exposure to ideas is not a solution when the desired result of education is graduates who can think for themselves.

A more-inclusive history leads to a broader sense of what America is about, Henry said.

“Part of our legacy as Americans is that we have always had to fight for freedom,” she said. “That, to me, is a noble conversation. We have marched to freedom from the founding of our country. That’s the conversation we want to have.”

For Baylor University education professor and assistant provost Wesley Null, the current political fight over public school curriculum is familiar territory. Null has studied the history of teacher education in Texas and said discussions on what should and should not be taught in public schools most frequently surface in textbook considerations.

The Gilmer-Aikin laws passed in the years after World War II established much of the public education framework in the state, including a state textbook committee that evaluates and approves the textbooks that Texas students use.

The decades that followed have seen challenges to social studies textbooks over treatment of topics like the New Deal, the United Nations, the role of the Supreme Court, racial integration, the Civil Rights movement of the 1960s, religion, capitalism and free enterprise, Ronald Reagan and more, Null said.

“These are just cultural war battles. … It’s usually a ten-year cycle (of textbook review) when these things erupt,” he said.

Textbook fights often are the ripples of cultures changing over time.

“Part of what is going on is that books and articles on Texas and American history are changing,” Null said. “There are diverse viewpoints now making (their) way increasingly into a larger culture, a larger public.”

What bothers Null about such discussions, including the current ones on critical race theory, is how the role of teachers is marginalized or misperceived. The perception that student outcomes can be achieved by adding or subtracting material to curricula is somewhat mechanical, “pieces added like building a Ford truck,” he said.

“Teachers aren’t just instruments to (transmit facts). They have the capacity to hold competing ideas regardless of the state standards of a textbook,” Null said. “Teachers want their students to reflect deeply on what the facts are and recognize that facts can conflict with each other and that’s OK. If we don’t encourage teachers to do that, how can we encourage students to do that?”

Ryan Lohr, who has taught Texas and American history for four years at Tennyson Middle School, said he sticks to the facts, drawn from original documents and primary sources, when talking about slavery in the state, Waco naval hero Doris Miller or the 1915 lynching of Jesse Washington. The facts are enough for students to make connections with something in their experience, he said.

“To me, all history is the story of how we as humanity got to this point,” Lohr said.

The Texas law that passed last month and the bill still under consideration address only public schools up to grade 12, but the potential to chill class discussions of history and current events runs counter to a major instructional technique for some teachers and college professors.

Looking at sometimes contradictory facts, considering multiple viewpoints, discussing how various factors can influence an event: that’s what teaching, and history, is about, Cruseturner said.

“That to me is the college experience. (The legislative perception of teaching) is almost a separate reality of what a history teacher would do,” he said.

Historians often disagree on research and how to interpret it. Still, there is concern where the current legislation will lead. “Is there a chilling effect? I have colleagues who worry about that,” Cruseturner said.

For high school teacher Yasko, sticking to state standards and thinking about how best to teach it is not bad advice.

“Being more cautious about what you say isn’t a bad thing,” he said.

Bolivian Cholitas play football at top of a mountain

The fire that destroyed much of G.W. Carver Middle School in July was accidental, officials announced Thursday.

Patience Nentwich, a 19-year-old with a big personality, already knows how to rebuild a Ford pickup truck motor but she came to Texas State Te…

Waco High School American history teacher James Yasko notes that having students grapple with competing or past points of view is part of their education. “Teaching both sides of an issue helps develop good thinking skills,” he said.