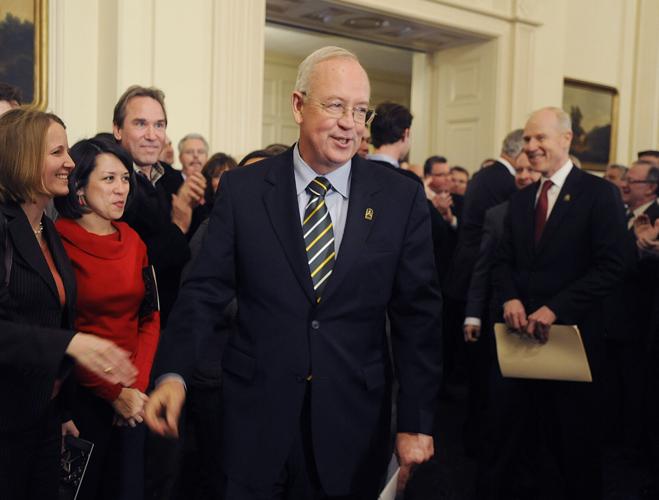 Ken Starr is introduced to Baylor University faculty Feb. 16, 2010, before taking the post as president that June. 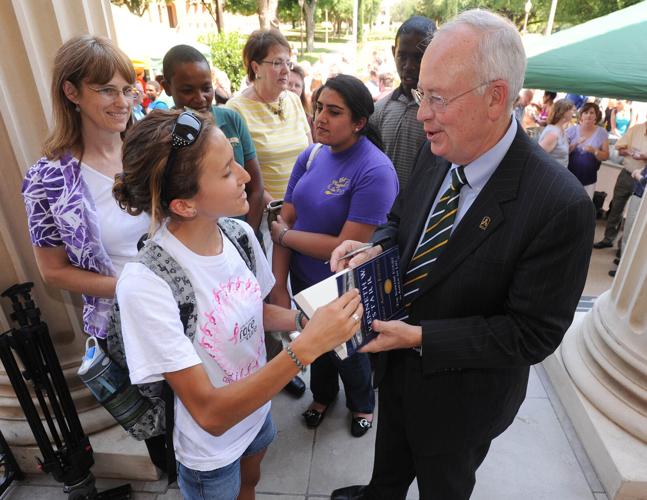 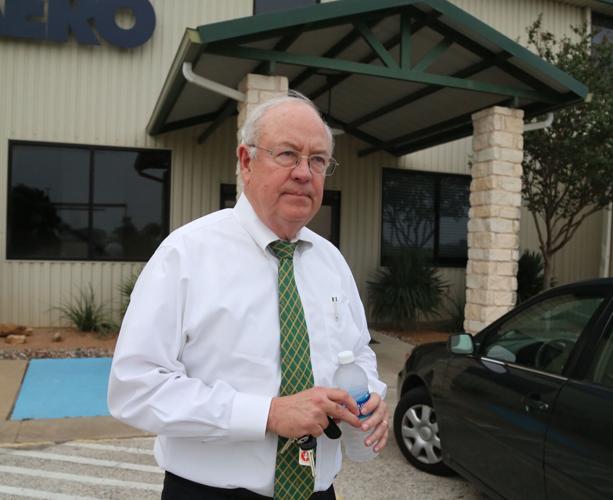 Baylor President Ken Starr leaves a terminal at a Waco airport in May 2016, in the days before Baylor fired him as president. He remained briefly as the school's chancellor and later as a law professor. 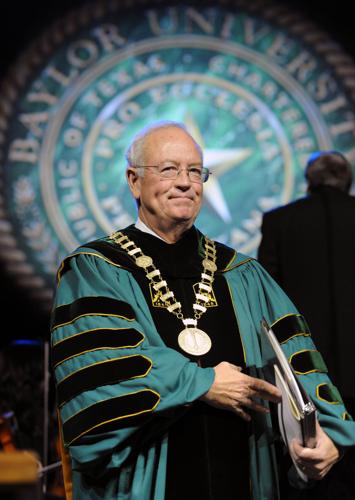 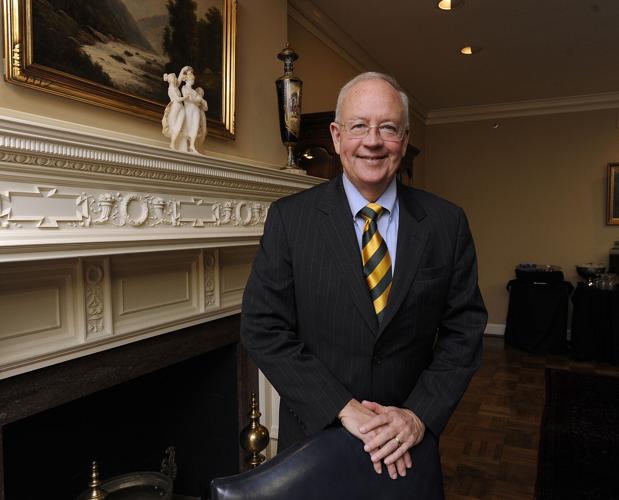 Ken Starr is seen in 2010, shortly before Baylor officially announced he would be the school's new president. 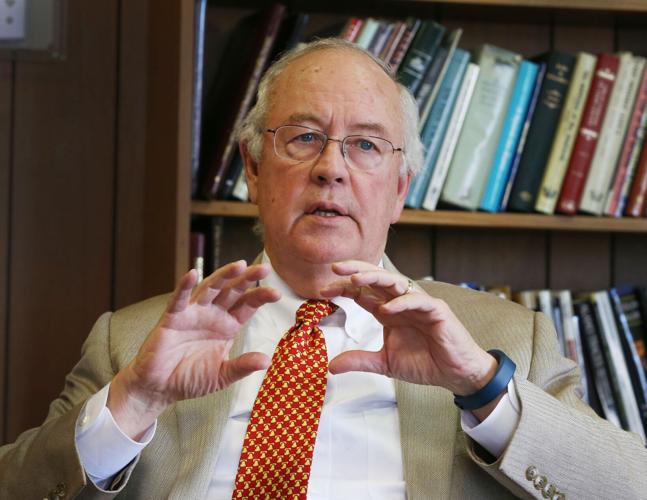 Ken Starr talks about his new book at the Tribune-Herald on March 2, 2017.

Kenneth Winston Starr, a former U.S. solicitor general who became the national face of the 1990s Whitewater investigation of the Clinton family years before he became president of Baylor University, died Tuesday. He was 76.

Starr had been hospitalized for months in Houston, family members and friends said.

"My beloved, brilliant, kind and loving husband has gone to be with his Savior after 17 weeks in the surgical intensive care unit at Baylor St. Luke's Medical Center in Houston due to complications from surgery," wrote his wife, Alice Starr, in a text to friends and supporters. "Ken was so very courageous, he never complained, and he continually expressed gratitude to all his nurses and doctors for their care."

Starr served as Baylor president from 2010 until a campuswide sexual assault scandal ended his tenure in 2016. He and Alice Starr continued to make Waco their home after his departure from Baylor.

Starr will be buried in the Texas State Cemetery in Austin following a memorial service at Antioch Community Church at 3 p.m. Sept. 24. Visitation is planned at Wilkirson-Hatch-Bailey funeral home in Waco from 4-7 p.m. Sept. 23.

“Judge Starr was a dedicated public servant and ardent supporter of religious freedom that allows faith-based institutions such as Baylor to flourish,” Baylor President Linda Livingstone said in a statement Tuesday. “Ken and I served together as deans at Pepperdine University in the 2000s, and I appreciated him as a Constitutional law scholar and a fellow academician who believed in the transformative power of higher education."

Harriet Miers, a Dallas attorney who served as White House counsel to President George W. Bush, knew Starr for decades and described him as both brilliant and humble.

"He just always has been a remarkable, gracious, diligent and kind human being," Miers said in an interview Tuesday. "He cared about the rule of law and what our country stands for in terms of its freedoms and the ability of people to choose the kind of life they want to live."

Starr, born in Vernon, Texas, grew up in San Antonio as the son of a Church of Christ preacher, and as a young man he sold Bibles door to door. He graduated from George Washington University in 1968 and earned a law degree from Duke University in 1973. In 1970, he married Alice Mendell, a New Yorker he met at a Harvard summer Spanish class, and the two would go on to raise three children.

Starr served as a law clerk to Supreme Court Chief Justice Warren Burger from 1975 to 1977, then as an appellate judge in the 1980s before being named solicitor general in 1989. He would go on to argue 25 cases before the Supreme Court on behalf of the federal government.

U.S. District Judge Judge Ed Kinkeade of Dallas, a Baylor graduate and friend of the Starrs, said Ken Starr was highly regarded among Supreme Court justices of all political persuasions, and that reputation led him to be chosen as independent counsel in the Whitewater probe in 1994.

Whitewater, which began as an investigation of President Bill and Hillary Clinton's connection with a failed Arkansas real estate deal, continued for five years and led to 11 convictions, though none for the Clintons. However, his explosive revelation that the president had had an affair with an intern and then lied about it under oath became one of the biggest news stories of the 1990s.

"He was at the time the most famous man in America," Kinkeade said. "He didn't ask for that job. He had been solicitor general and people had been talking about him as the next person for the Supreme Court. But he became way too controversial for that. He didn't shy away from controversy."

The Starr Report led to the House impeachment of Bill Clinton in 1998 for lying under oath and obstructing justice. The U.S. Senate acquitted Clinton in 1999, and Starr resigned as independent counsel that same year.

Starr was not initially considered a partisan pick, according to "The Death of American Virtue: Clinton vs. Starr," a 2010 book-length account of Whitewater by Ken Gormley.

“Nothing in the historical record would suggest that Ken Starr was extreme or over the top during the early stages of his tenure as independent counsel," Gormley wrote. "Indeed, he was receiving ample criticism from the Republican party’s far-right wing for his timidity and ineffectiveness."

In a 2010 interview with Waco Today, Alice Starr recalled how her husband handled becoming a lightning rod in the partisan wars of the 1990s.

“He’d come home and didn’t even want to talk about it. He wanted to be Dad,” she said. “But that was hard for me because I’d stay up and watch those horrible programs. I wanted to know what he was being accused of and he didn’t want me to talk about it. I also didn’t want him to be blindsided. So I told him I felt it was my duty to keep on top of things.”

In 2004, the Starrs headed to the West Coast, where Ken Starr became dean of the law school at Pepperdine University and maintained a private law practice. One client was billionaire Jeffrey Epstein, whom he helped secure a plea deal for solicitation after Epstein was accused of sexually abusing children.

Starr remained at Pepperdine until he was chosen to become 14th president of Baylor, starting on on June 1, 2010.

At Baylor he won over many who feared he was merely a partisan political figure, and his diplomatic manner and personal skills served to unify a campus that had been divided over changes implemented under the Baylor 2012 plan. Starr also resolved a bitter dispute between the university administration and the Baylor Alumni Association.

Lyndon Olson was among those whom he won over. Olson, a Waco businessman, was not only an alumni association leader but had also served as Clinton's ambassador to Sweden.

"I was prepared not to like Ken Starr," Olson said. "I was in Sweden right before all the Monica Lewinsky stuff, and I was appointed by Bill Clinton. What I knew about Ken Starr was probably a little informed by my political prejudices. But Ken and I in time became close personal friends."

He said he and Starr continued to debate politics, but Olson said he respected Starr's commitment to academic integrity and freedom.

During his six years at Baylor, Starr oversaw hundreds of millions of dollars worth of construction projects, including McLane Stadium, the new business school, the East Village Residential Community and Hart Track and Field Stadium.

At the same time Baylor became a nationally known football power, with Robert Griffin III winning the school's only Heisman Trophy in 2011 under Coach Art Briles.

In her statement Tuesday, Livingstone credited Starr with a "profound impact on Baylor University," including the Pro Futuris strategic vision in 2012 that "placed Baylor on the path to where we are today as a Christian Research 1 institution."

But Starr's tenure was derailed in a dramatic way in 2016, when a campus sexual assault scandal rocked the world's largest Baptist University.

A report by the law firm Pepper Hamilton found that Baylor leaders, including Starr, had shown a "fundamental failure" in responding to complaints of sexual assault against women, including some who were reportedly victims of Baylor's football team.

The board of regents quickly ousted Starr as president but eased the transition by allowing him to continue serve for a time as chancellor and later a law school professor.

Numerous other top Baylor officials, including Briles and Athletics Director Ian McCaw, also were ousted in the aftermath of the scandal.

Kinkeade said he never heard Starr complain about Baylor's treatment of him. He said Starr and his wife continued to be generous residents of Waco after he stepped down.

But Starr was not finished with controversy. In January 2020, he joined the legal team defending President Donald Trump in the president's first impeachment trial. The House had voted to impeach Trump over allegations that he pressured Ukraine President Volodymyr Zelenskyy to investigate the son of political rival Joe Biden. The Senate narrowly voted to acquit Trump.

Kinkeade said he does not know what Starr thought of Trump, but he believed in the principle that everyone deserves representation.

"It's the way we think as lawyers: I'm going to take on a tough case," said Kinkeade, who teaches part-time at Baylor Law School. "I tell my students, 'You're going to represent people who have driven their life into a borrow ditch.' He was willing to do that even if it courted controversy. … There are some people who are able to do that, but most aren't."

Waco Mayor Dillon Meek, a graduate of Baylor and its law school, expressed his "heartfelt condolences" to the Starr family Tuesday in a message to the Tribune-Herald.

"I am thankful to Judge and Mrs. Starr's commitment to worthy charitable and philanthropic work in Waco, which they demonstrated time and time again."

In an interview, Meek said he appreciated Starr's personal letter to him when he was elected mayor in 2020.

"He was incredibly warm and thoughtful about how he could bring about positive change," Meek said.

Friends, family and colleagues from as far away as Washington, D.C., and as close at Baylor University gathered at Antioch Community Church for Ken Starr’s celebration of life ceremony Saturday.

States with the worst teen drinking and driving problem

States with the worst teen drinking and driving problem

Ken Starr is introduced to Baylor University faculty Feb. 16, 2010, before taking the post as president that June. 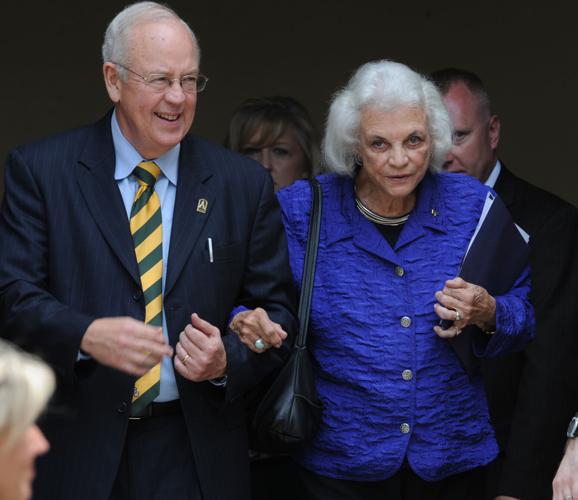 Baylor President Ken Starr leaves a terminal at a Waco airport in May 2016, in the days before Baylor fired him as president. He remained briefly as the school's chancellor and later as a law professor.

Ken Starr is seen in 2010, shortly before Baylor officially announced he would be the school's new president.

Ken Starr talks about his new book at the Tribune-Herald on March 2, 2017. 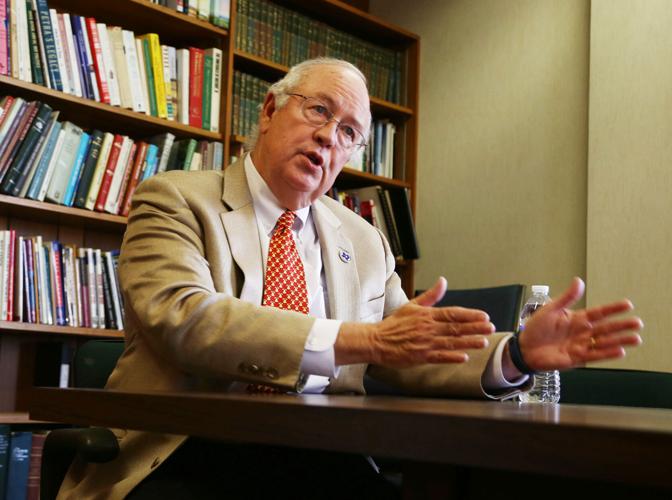 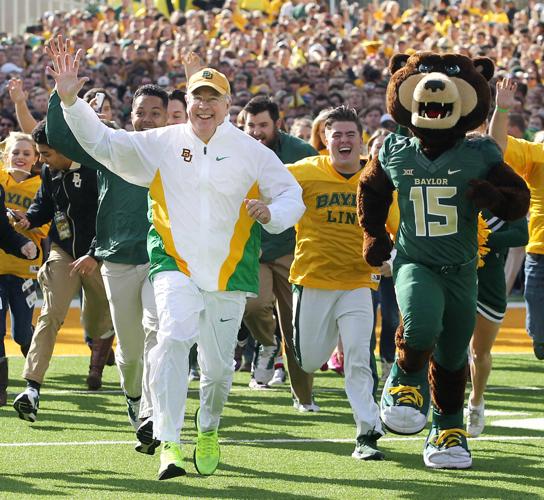 Ken Starr runs on the field during a Baylor football game in 2015. A sexual assault scandal cast a pall on Baylor and its football team the next year and led to Starr's ouster.