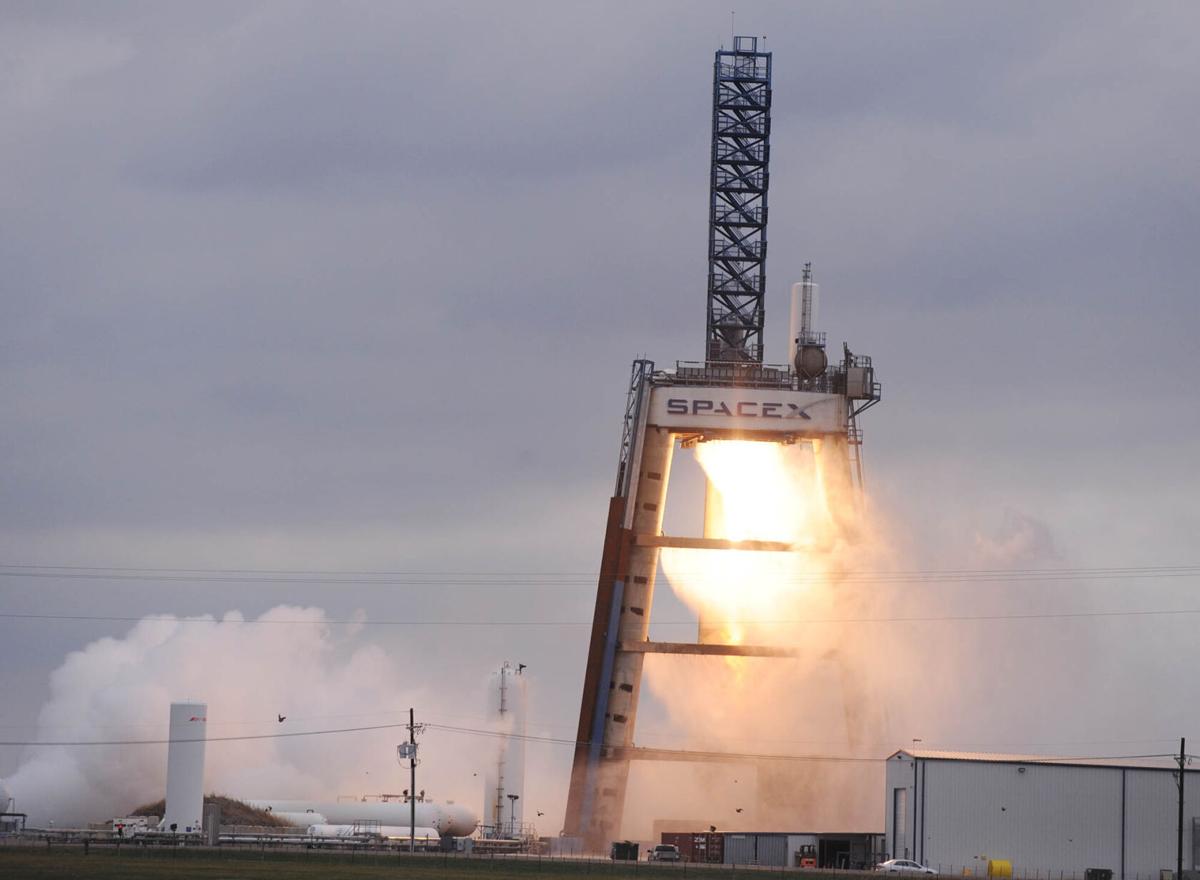 The SpaceX test stand in McGregor may in the coming years hold rockets produced next door. Waco and McLennan County will chip in $6 million to back SpaceX’s plans for a $150 million rocket factory in McGregor. 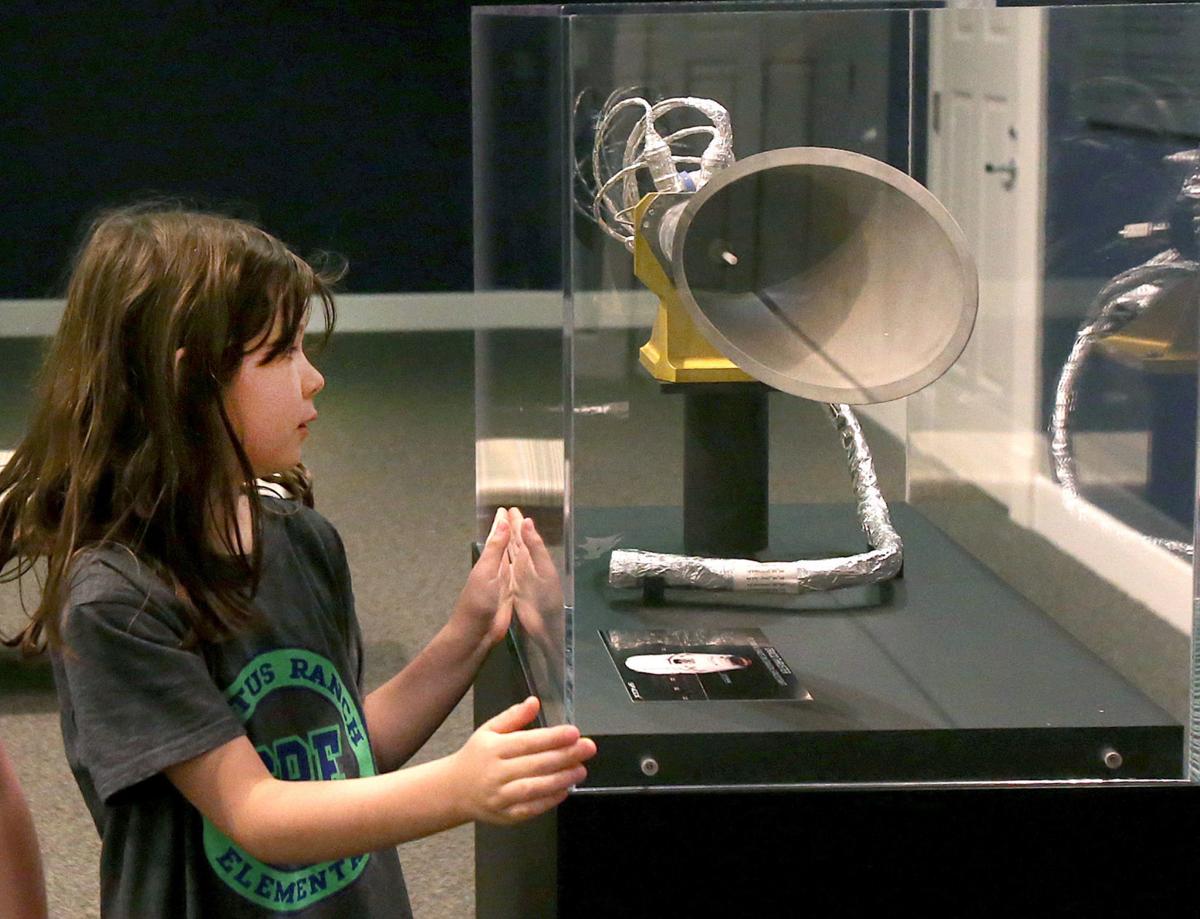 Round Rock’s Cactus Ranch Elementary first grader Liani Dennis looks over a thruster from a Draco capsule on display in a SpaceX exhibit at the Mayborn Museum in 2019. SpaceX also is expected to work with the city of Waco on curriculum for a planned city STEM center.

SpaceX is planning a $150 million expansion of its McGregor test facility into a powerhouse churning out enough rockets to make humanity interplanetary.

Waco and McLennan County plan to chip in $6 million for the effort, assuming work wraps up by 2025, the company’s McGregor payroll of 578 employees grows by 400, and SpaceX partners with the Mayborn Museum and a revamped city of Waco Bledsoe-Miller center to promote science programs.

Sending people to Mars is not on the list of requirements for the Waco-McLennan County Economic Development Corp. contribution, but it is the long-range goal driving SpaceX.

SpaceX plans to start work this year on a rocket production facility covering about 50,000 square feet near its existing rocket testing operation, said Kris Collins, a Greater Waco Chamber of Commerce vice president. She said she does not yet know the exact location, but the company is expected to expand the facility as production grows.

During a meeting Tuesday, the Waco City Council approved its half of the $6 million economic development incentive. McLennan County Commissioners have also approved the agreement.

Collins said SpaceX would act as a business partner and help write curriculum for a new science, technology, engineering and math center the city of Waco plans to put in the Bledsoe-Miller Community Center facility. The existing community center operations there are slated to move to the Doris Miller YMCA property the city bought earlier this year, though the details of the move and new center remain in the planning stage.

The company will also be required to host or participate in at least one vendor fair annually, according to a city council summary of the deal.

City Council Member Andrea Barefield said she got the idea for a STEAM center in East Waco when one of her sons went to an event at a Best Buy Teen Tech Center in Dallas in late 2018. It is in a city of Dallas recreation center and had has video recording equipment, editing space, a recording studio and a sound booth along with computer equipment for various technology fields.

Barefield said the city council asks industry leader what kind of workforce they will need in five to 10 years.

“Those are the things we will infuse within the edutainment facility that is people for children and young people, advancing them in STEAM,” she said.

Bledsoe Miller could be a place where kids can do STEAM-based after school activities, learn new skills and make their own projects, she said. Activities could range from coding to robotics and maritime engineering, and could become part of the city’s summer programs, Barefield said. A studio like the one in Best Buy’s tech center in Dallas could teach kids about sound engineering. The maritime and musical aspects would be nods to the facility’s namesakes, both famous African American Waco natives from the early 20th century. Doris Miller earned his renown for heroics during the attack on Pearl Harbor, and Jules Bledsoe was a celebrated baritone who performed internationally.

“You cannot have anything in the name of Jules Bledsoe without some art in it,” Barefield said.

Barefield said when she founded and ran a nonprofit performing arts studio in Houston, the dance program included a rhythm and arithmetic class that used tap to teach math and vice versa.

The new $150 million figure and timeline for SpaceX’s McGregor plans, meanwhile, come when attention on the company is focused on a mission next week for a civilian crew to orbit Earth for the first time.

City council documents related to the McGregor deal provide scant information on the expansion and do not even mention rocket production. But during Tuesday’s council meeting, Waco City Manager Bradley Ford said the expansion would make the 4,280 acres SpaceX leases in McGregor’s industrial park home to “the most advanced rocket engine factory in the world.”

Founder Elon Musk first publicized the idea of a McGregor rocket production plant in July. In a series of tweets, he said McGregor would “focus on volume production of Raptor 2” rocket engines, while a factory in California would focus on Raptor Vacuum rockets and experimental designs.

“By ‘volume production,’ I mean 2 to 4 engines per day,” Musk tweeted. “That’s super high volume for big rocket engines, but low volume by automotive standards. … That’s about what’s needed over ten years to create the fleet to build a self-sustaining city on Mars.”

SpaceX already has gotten $5 million from the city and county, through two Waco-McLennan County Economic Development Corp. grants, since SpaceX started up its rocket testing facility in McGregor in 2003.

At least 60% of all employees on site need to be McLennan County residents and at least 25% need to be city of Waco residents, requirements SpaceX met exactly for its previous two grants, Collins said.

The new agreement includes a requirement that SpaceX also collaborate with the Mayborn Museum on a permanent exhibit, but that is essentially a repeat of an agreement for a previous grant, she said.

SpaceX has previously given the museum a Merlin 1D rocket engine that went on display, and the Mayborn has a SpaceX room in its Jeanes Discovery Center. The California-built Merlin engine was tested in McGregor and launched in a Falcon 9 rocket at Cape Canaveral, Florida, on May 27, 2016.

Report delves into what went right, wrong for Waco during 'minute-by-minute nightmare' of February storm

The SpaceX test stand in McGregor may in the coming years hold rockets produced next door. Waco and McLennan County will chip in $6 million to back SpaceX’s plans for a $150 million rocket factory in McGregor.

Round Rock’s Cactus Ranch Elementary first grader Liani Dennis looks over a thruster from a Draco capsule on display in a SpaceX exhibit at the Mayborn Museum in 2019. SpaceX also is expected to work with the city of Waco on curriculum for a planned city STEM center.