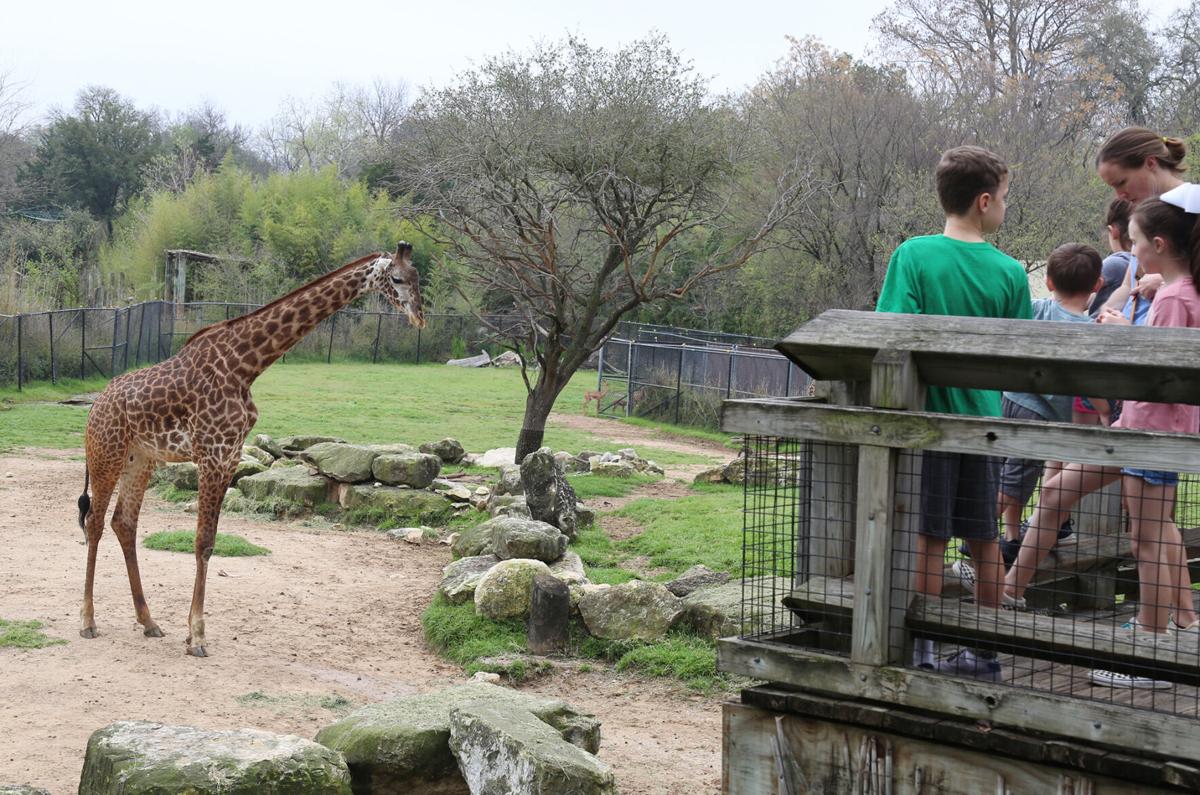 A giraffe looks toward zoo visitors during spring break this year. Zoo visits for fiscal year 2021 are on track to come close to visits in 2019. 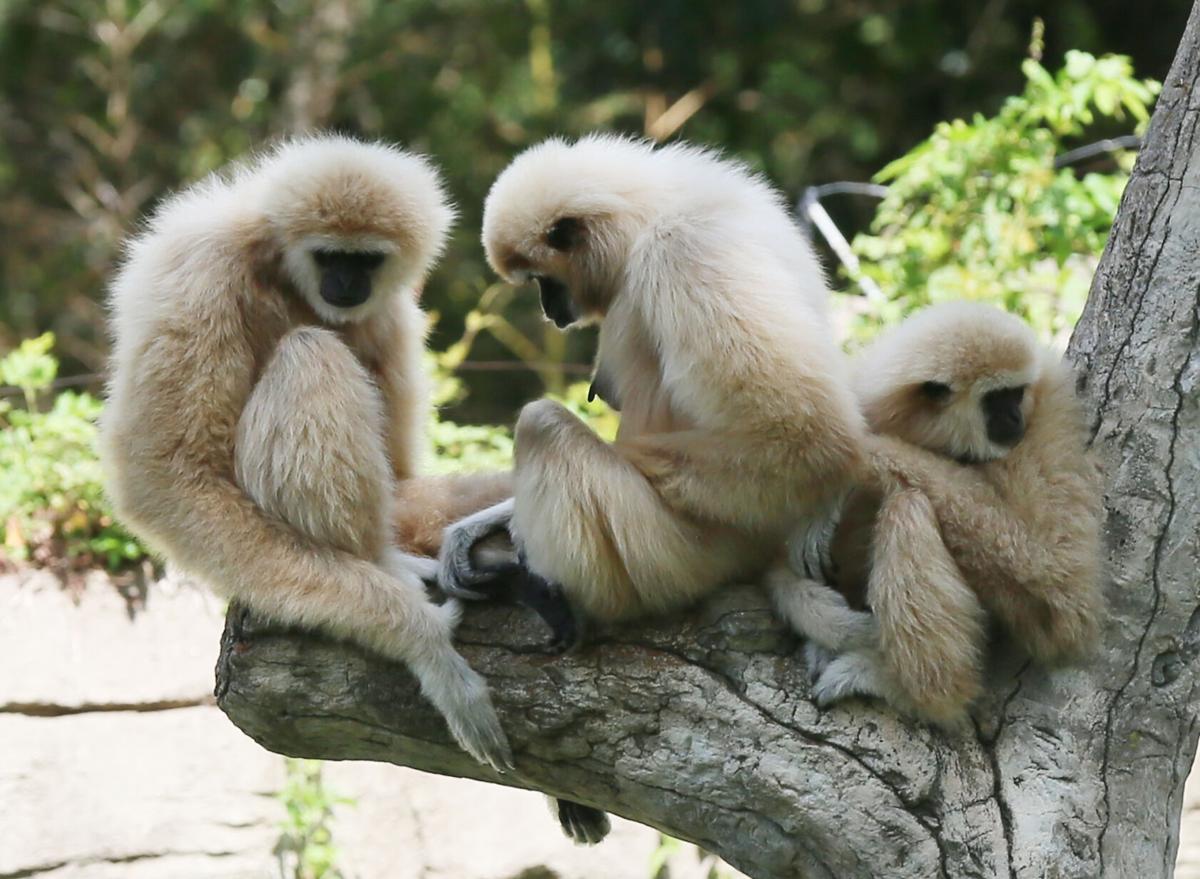 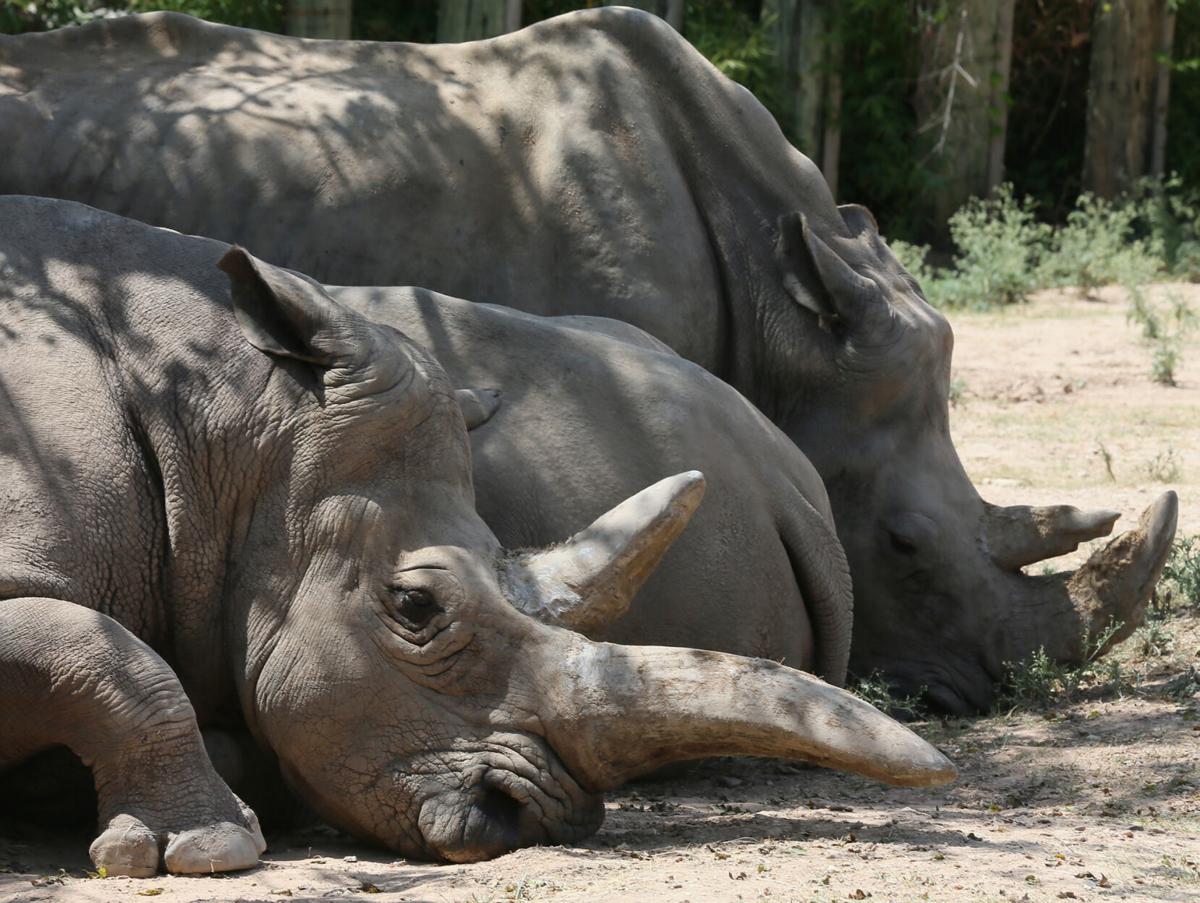 Rhinos rest in the shade at Cameron Park Zoo. 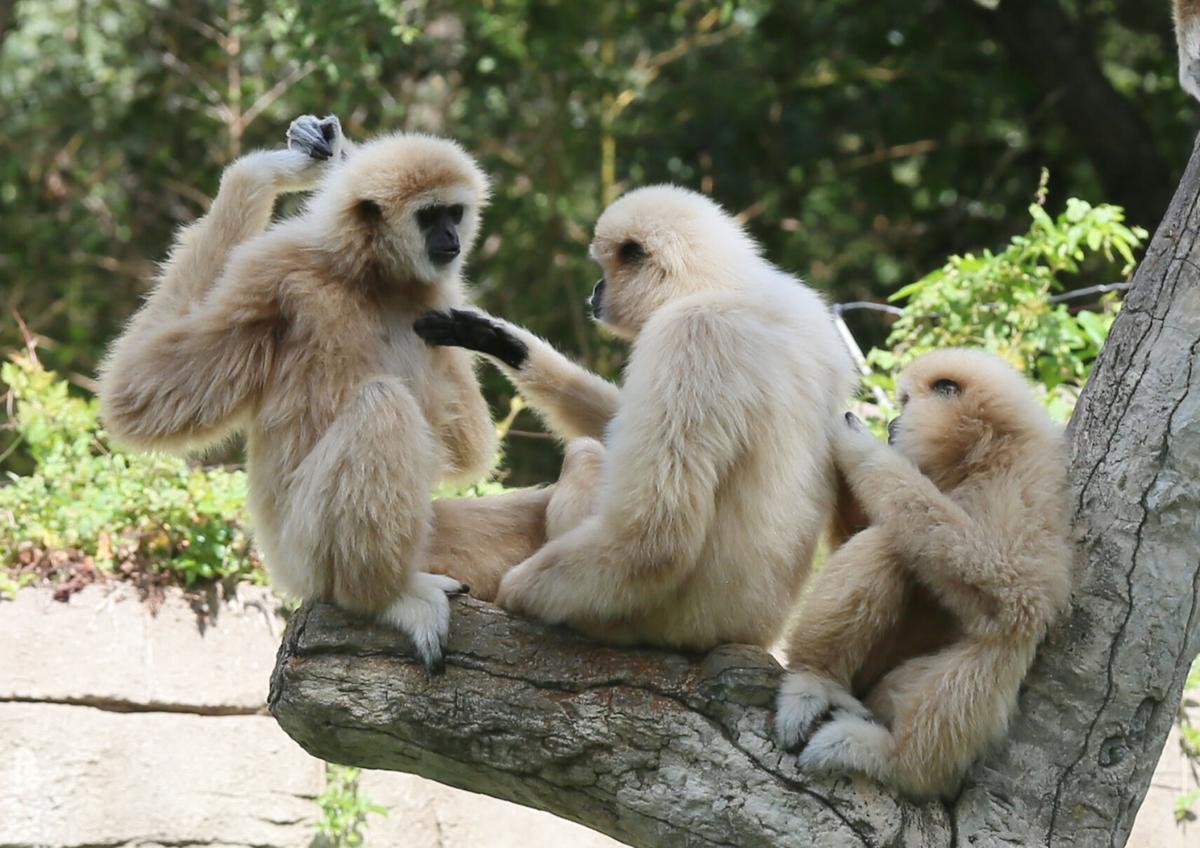 White-handed gibbons rest on a branch at Cameron Park Zoo. 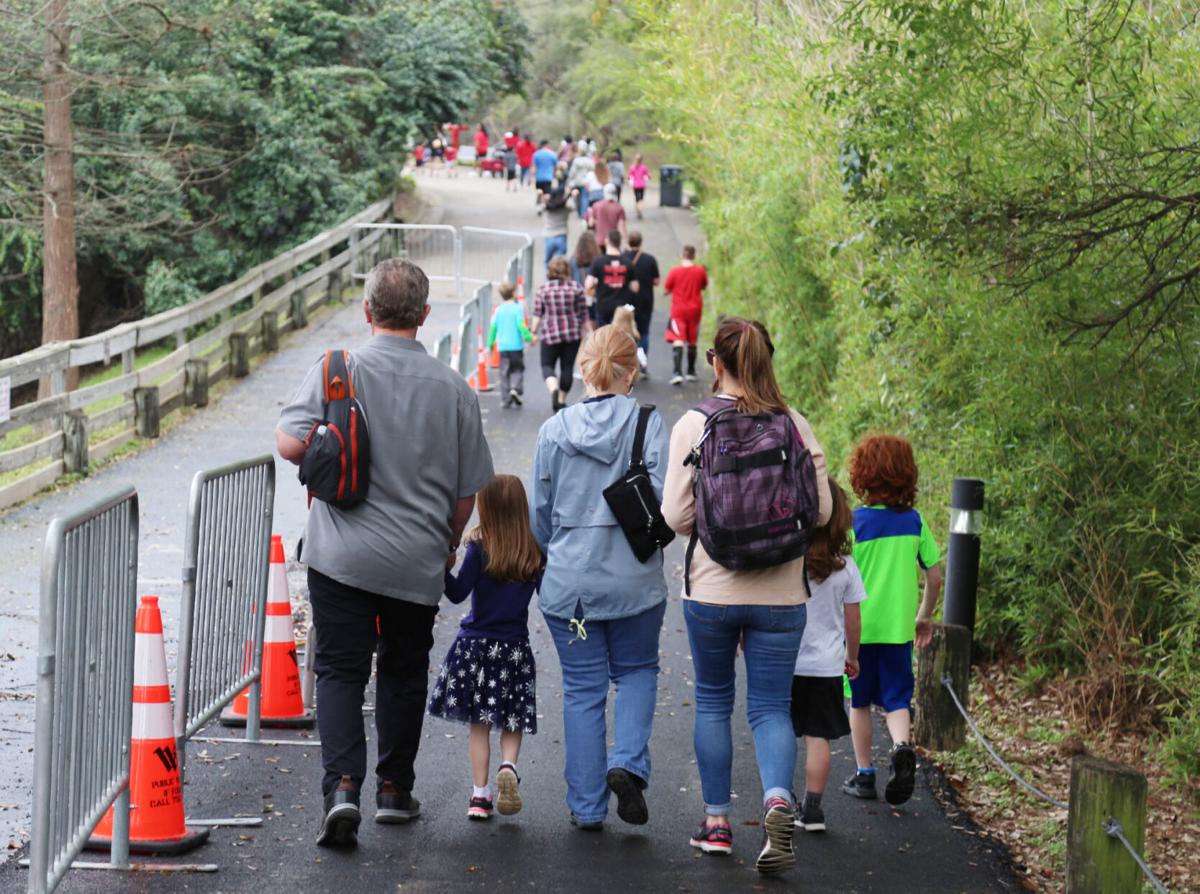 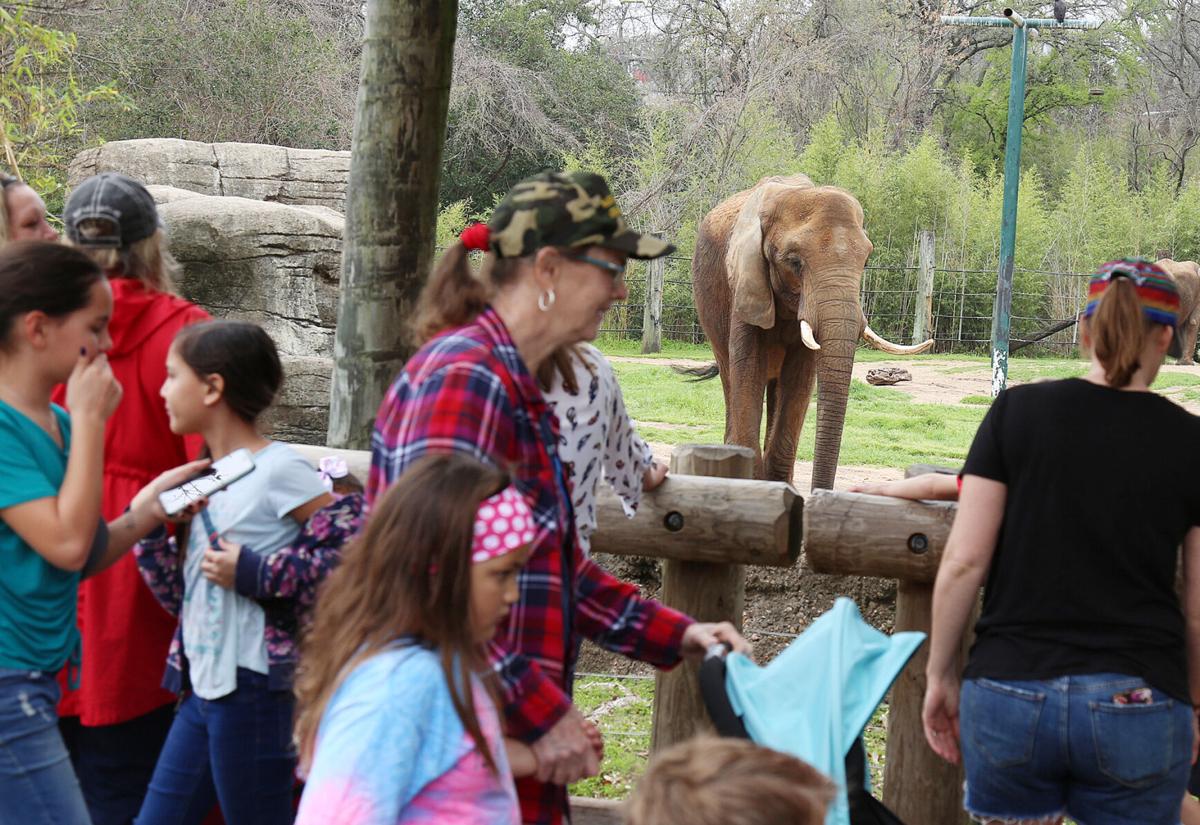 Visitors gather at the zoo's elephant enclosure during spring break this year. Attendance has rebounded. 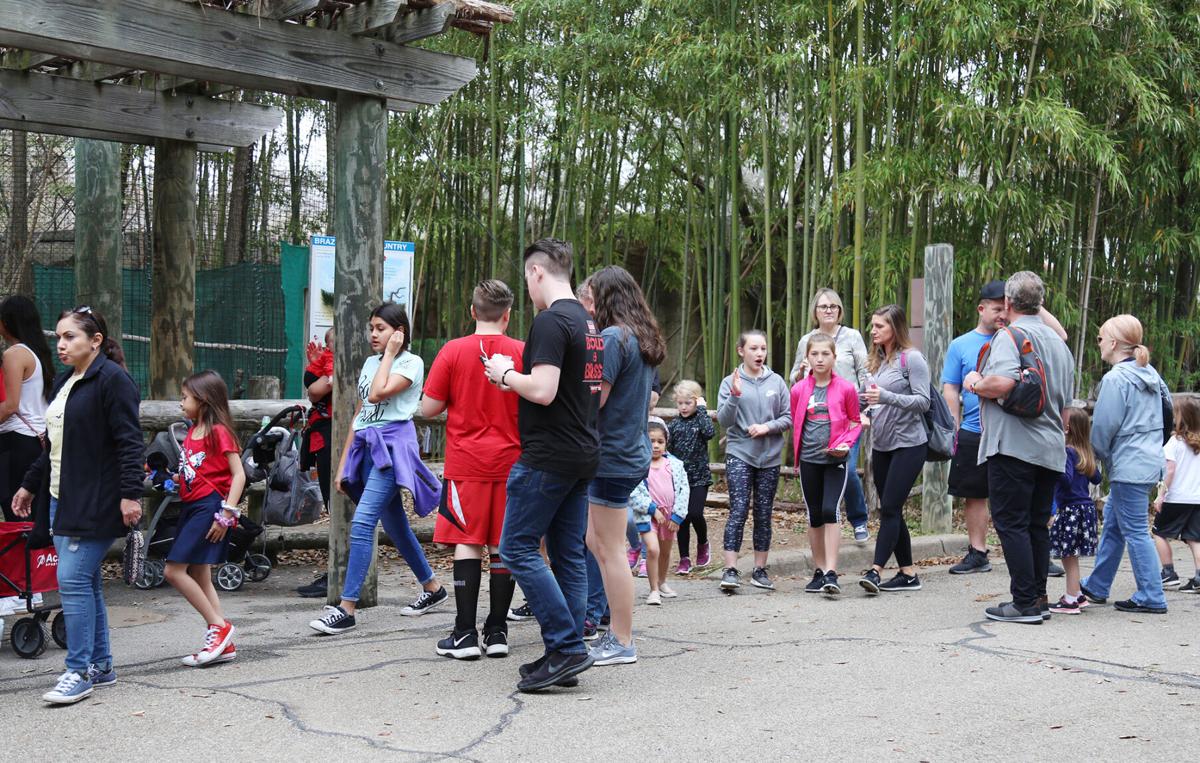 Cameron Park Zoo came back strong since last year’s pandemic-driven closure, with high attendance and multiple donations to the zoo society that handles fundraising for the organization, according to zoo and society officials.

The zoo’s food and gift shop revenue have already surpassed totals for last year and for 2019, and attendance is almost back in line with pre-pandemic levels, zoo director Chris Vanskike said.

“It seems like a trend that’s happening statewide,” Vanskike said. “People are just getting out into the outdoor environment and they seem to be spending a little bit more. It’s coming back a lot stronger.”

He said attendance has increased to about 90% of what he would consider “normal.”

Cameron Park Zoological and Botanical Society director Terri Cox said the zoo society tried to sell off as much merchandise as possible without replacing it in the leadup to the city assuming control of the gift shop in Oct. 2019. The city took control of the operation after identifying problems with how it was previously managed.

The city added new gift shop merchandise, including additional plush toys, but the transition coincided with a drop in visitors, so the effects were delayed. The zoo’s Treetop Cafe also added grilled cheese sandwiches and a few other new menu items that may have helped draw new customers.

The strong attendance has translated into strong support for the Cameron Park Zoological and Botanical Society, Cox said. The society is the nonprofit that handles fundraising for the zoo’s animal enrichment and conservation programs.

“It’s been a struggle at times, but if I had to sum it up I’m overwhelmed with the support the zoo has in the community, and just how generous everyone has been to help us through these difficult times,” Cox said.

She said more than 7,000 households are zoo society members, triple the number last year. When the zoo reopened after last year’s closure, the education department used an app to set up themed scavenger hunts suited to smaller groups of people, she said. The activity could outlive the ongoing pandemic.

“Thinking outside the box has been really good for us,” Cox said.

“Really the whole reason zoos exist is to promote conservation for wild species, so having those donations was really, really important to us,” Cox said.

She said she also suspects families were drawn to the zoo as a relatively safe, outdoor activity. This year’s Brew at the Zoo fundraiser will run Oct. 15 and Oct. 16, with 500 guests allowed per night. Cox said there will be live music in multiple parts of the park to encourage guests to spread out.

Cox said the zoo society took in more than $100,000 in COVID-19 relief funding to keep the zoo functioning and pay employees who could not come to work. The society also applied for a $79,000 Paycheck Protection Program loan and loan forgiveness to keep paying workers through the shutdown.

“Those people were still paid their salaries, and that’s pretty remarkable for a nonprofit organization, so we were happy to get that,” Cox said.

During the February snow storm, the zoo society received more than $10,000 in donations to help cover the cost of emergency repairs. It also received three donations of more than $30,000 each this year, which will help fund care for the zoo’s elephants, and support upcoming construction projects primarily funded by bonds issued by McLennan County.

Construction started last month on a bond-funded hoofstock barn. Cox said the zoo’s next bond-funded construction project, a new veterinary hospital and educational complex, is in the schematic design phase and the project is “moving quickly.”

A giraffe looks toward zoo visitors during spring break this year. Zoo visits for fiscal year 2021 are on track to come close to visits in 2019.

Rhinos rest in the shade at Cameron Park Zoo.

White-handed gibbons rest on a branch at Cameron Park Zoo.

Visitors gather at the zoo's elephant enclosure during spring break this year. Attendance has rebounded.