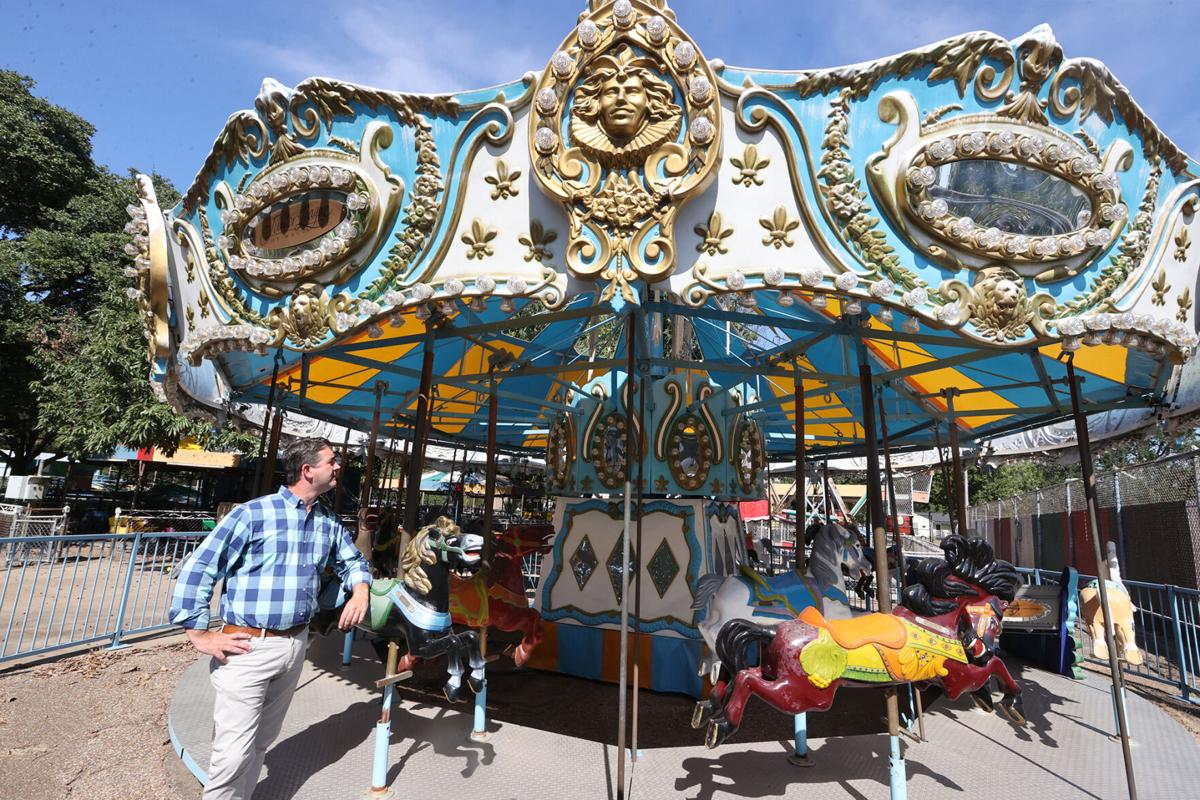 Waco Parks and Recreation Director Jonathan Cook takes a walk around the Kiddieland site last week. City Council Member Jim Holmes said the carousel stands out as an element many want to preserve as the park is cleared out in preparation for a revitalization project now heading into the planning stages. 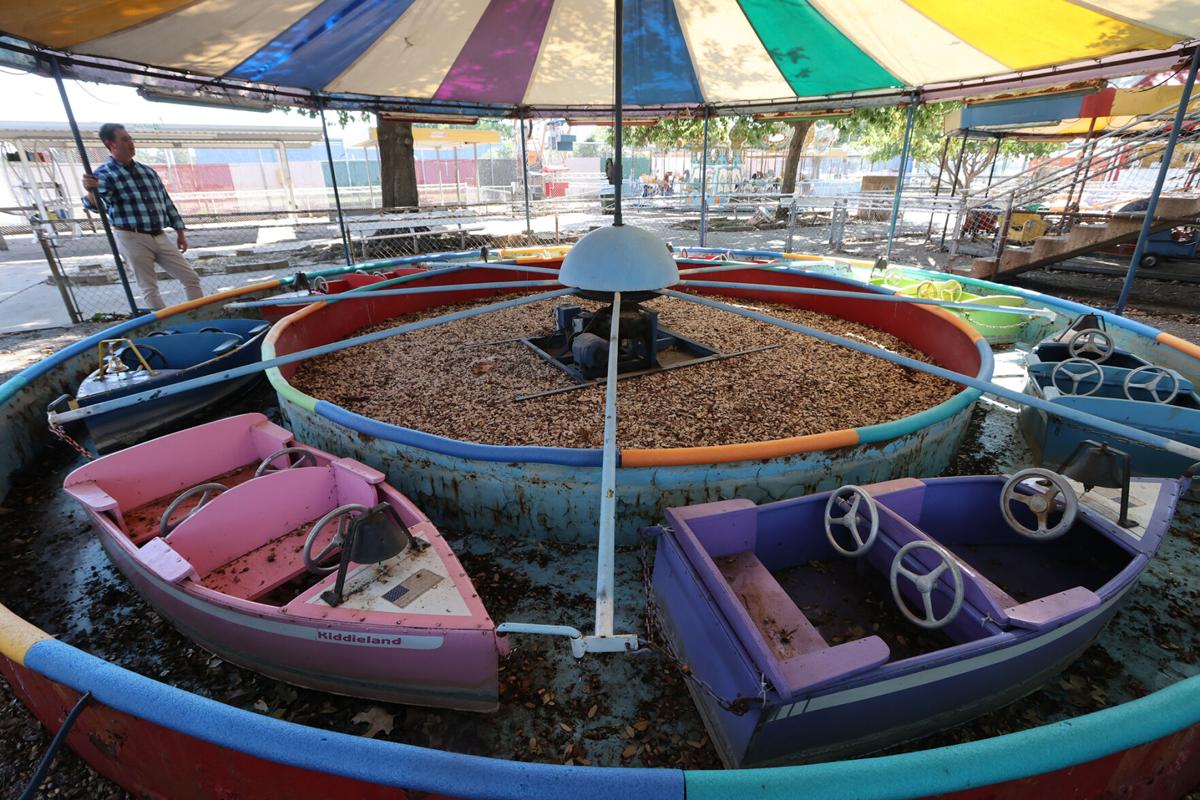 Waco Parks and Recreation Director Jonathan Cook stands near the boat ride that shut down after someone stole parts from the park. 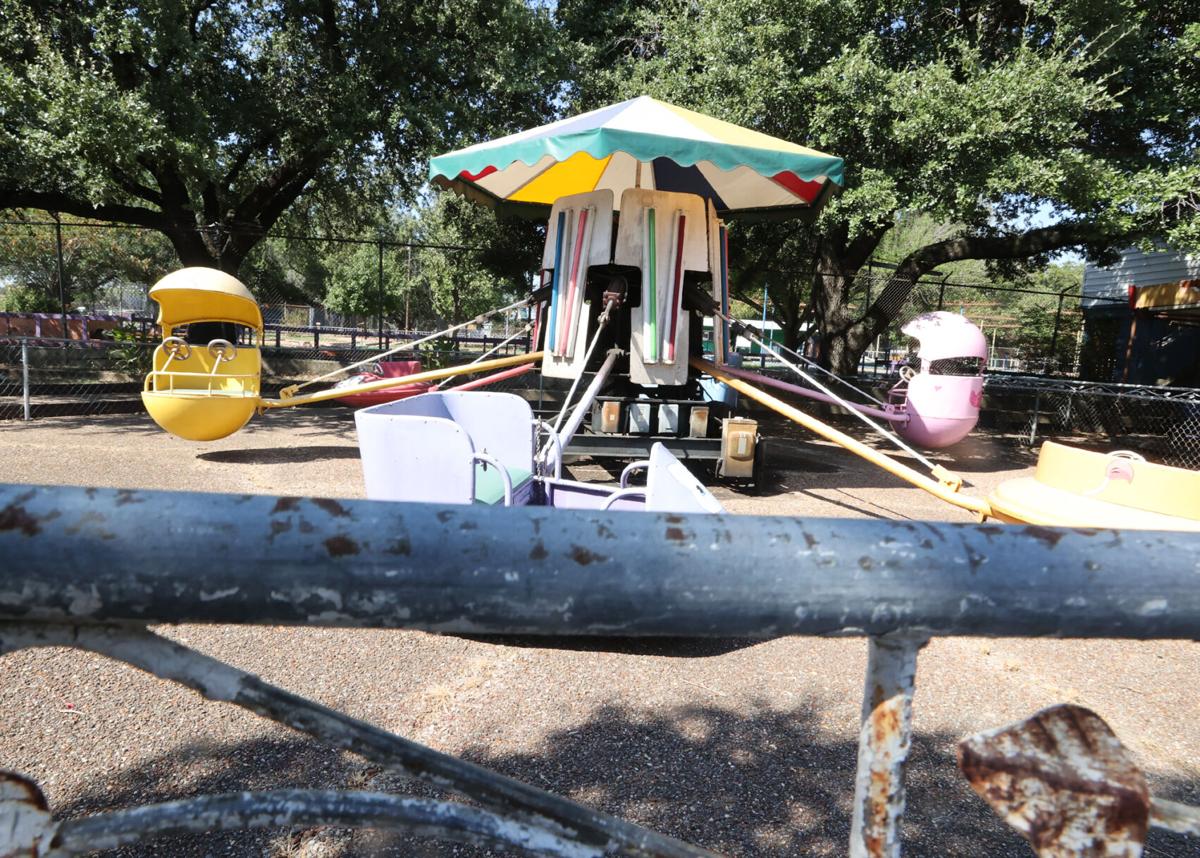 The Lions Club will auction off rides, signs and memorabilia from the park before demolition starts. 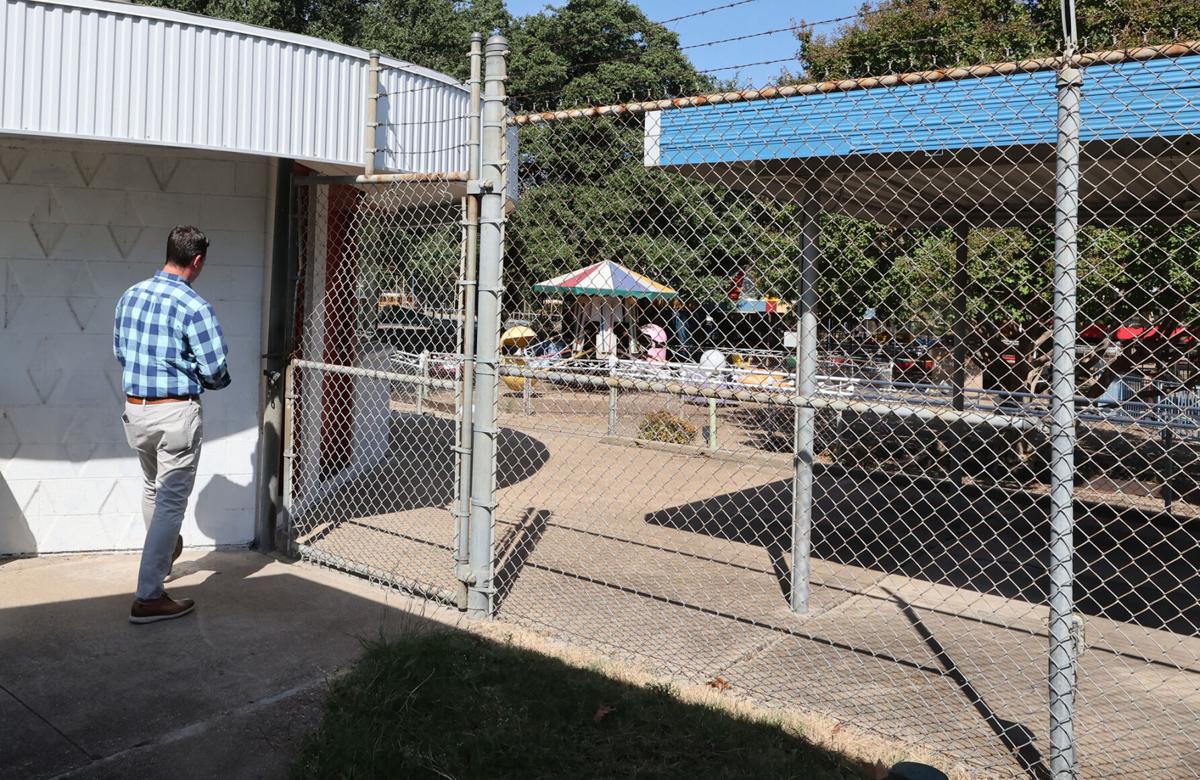 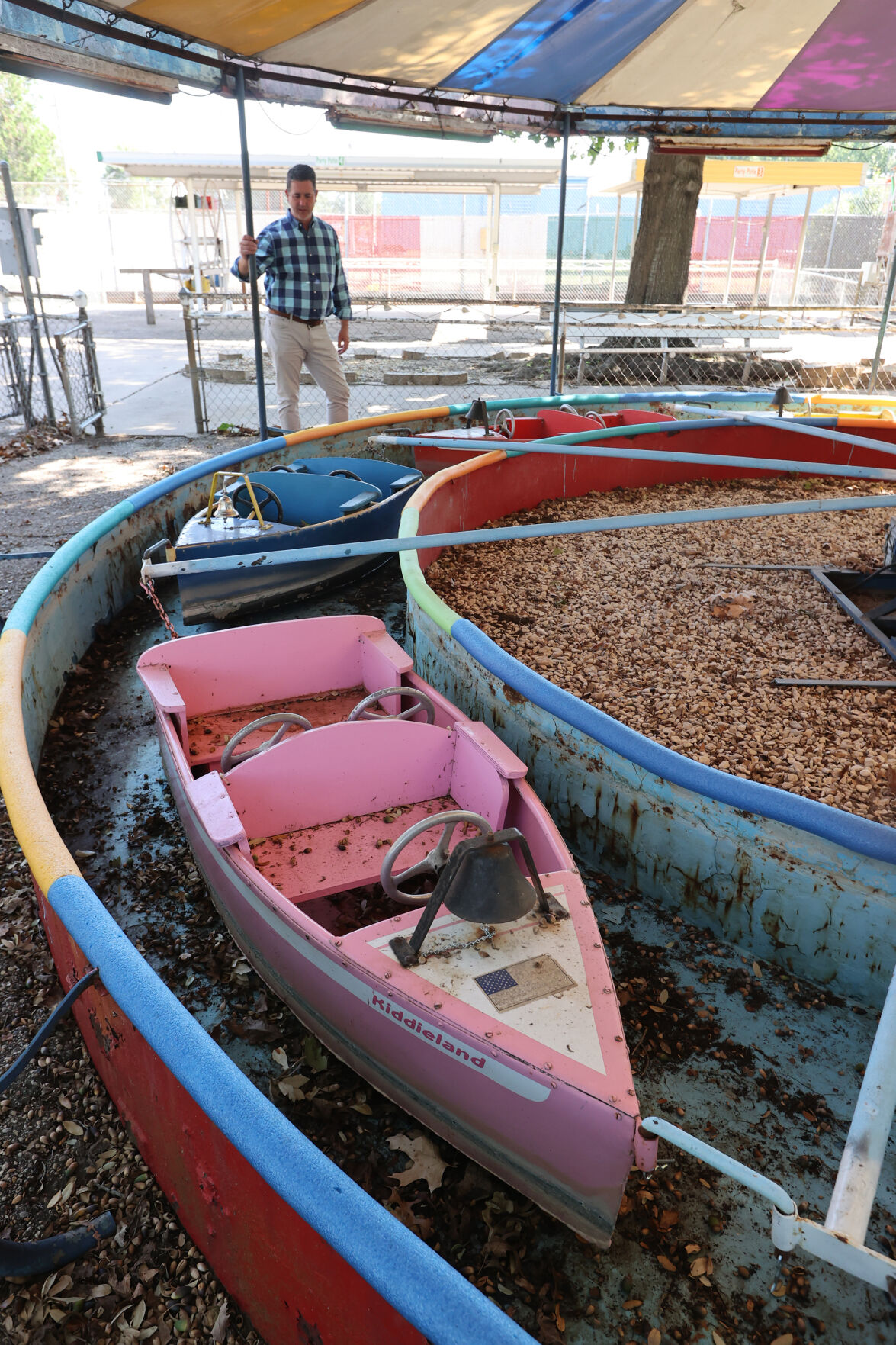 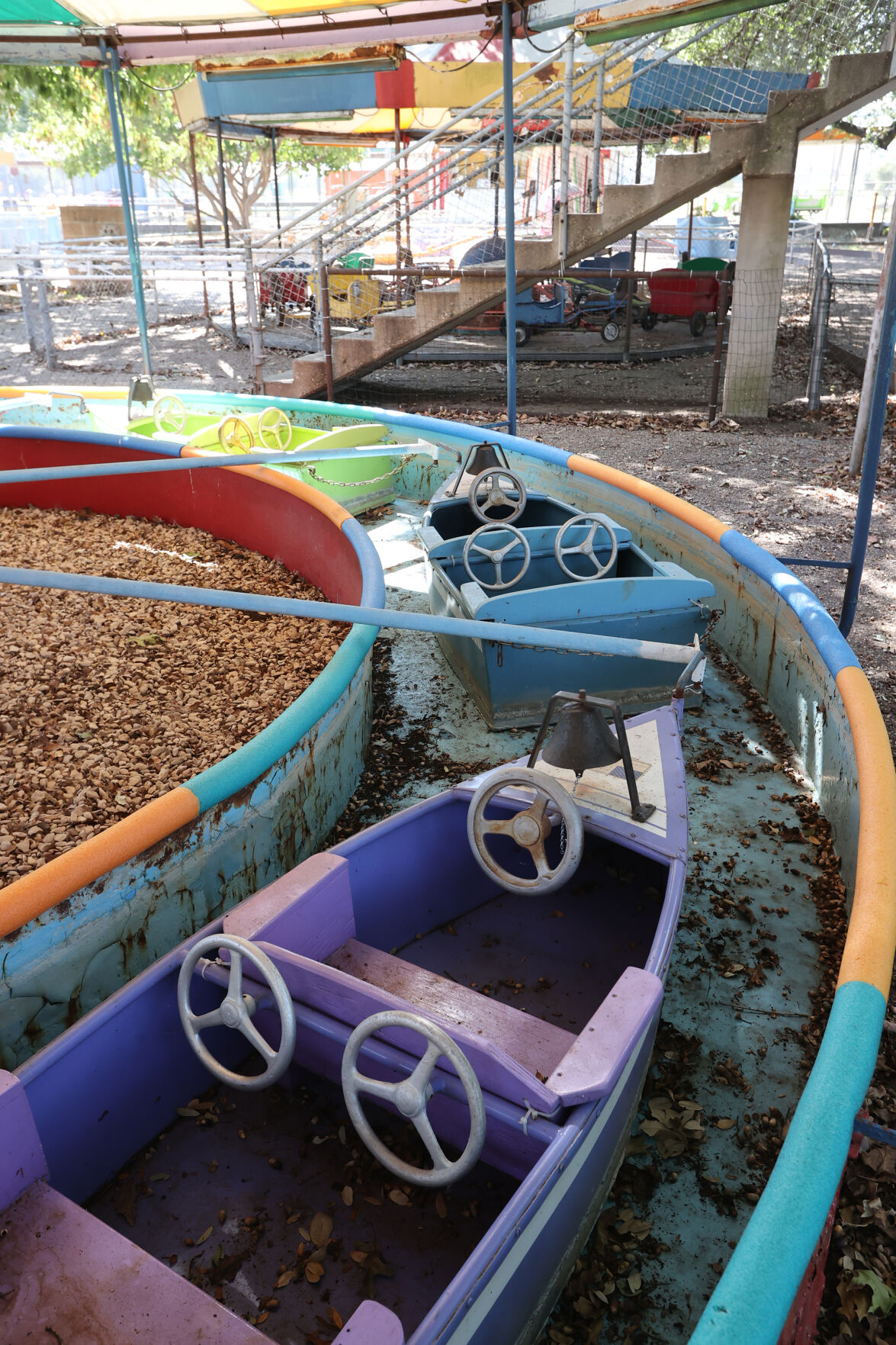 City workers have disposed of old tires and cleaned up overgrown vegetation at the closed Lions Park Kiddieland, but city officials say it will be a long time before plans for an overhaul of the park are clear.

Parks and Recreation Director Jonathan Cook said the city is working with local and state historical commissions because of the site’s age. Waco Founder Lions Club plans to auction off rides, signs and memorabilia from the 70-year-old amusement park, though a timeline for the auction has not been set. Cook said the city will form a committee by the end of the year with Waco Independent School District, McLennan County, the Extraco Event Center, the Lions Club and various other organizations with ties to the park.

The group will be tasked with guiding a major revamp of the park, in partnership with the Lions Club, that the city announced in July after the park struggled to reopen for the summer season. It will remain closed until the overhaul, whatever form it takes, is complete.

“I’ll admit, it’s a park that can serve many needs,” Cook said. “We don’t have a park in that area of town, also you can serve the neighborhood. It’s next to the Extraco and the new Base facility, also the sports complexes at the school and our Lake Air Little League. There’s no doubt it will have a regional appeal.”

Waco City Council Member Jim Holmes, whose District 5 includes the site, said the city ran a survey gauging public interest in what to do with the park in 2019. He said he would want to see another more thorough and more public survey conducted now that the city is in control of the park’s future.

“It’s challenging to define the scope,” Holmes said. “A neighborhood park would serve that neighborhood. It’s kind of historically been a city park, with folks from all over the city who come in with their kids, and it’s also been sort of a regional and national draw when visitors come to Kiddieland. So we’re trying to revive that.”

Holmes said the signature carousel, donated by the Waco Junior League in 2011, stands out as something people want to preserve. He said stakeholders have also discussed bringing in a new tall slide to replace the Super Slide, a distinctive metal slide notorious for its height and ability to conduct heat. The slide entertained children willing to risk accidentally touching the metal on a summer day from 1972 to 2018.

Holmes said many respondents in the 2019 survey named the slide as one of their favorite attractions.

In general, much of what made the park a favorite is what could keep it that way after the updates.

“Just bring it into the 21st century while making it a little bit easier to get around, more attractive, safe and well-lit and retaining some of the elements the Lions Club put together 50 to 70 years ago.” Holmes said.

After the Lions Club auction, demolition will begin. After the demolition, the community committee will start meeting and giving input on the project, and the city will hire a design firm. Updates will be posted to lionsparkwaco.com, where users can register for newsletters on the project’s progress.

Holmes said there is a recent history of land-swapping between Waco ISD, the city of Waco and McLennan County near Lions Park, but none of those trades directly affect the park site. The swaps are facilitating work collectively known as the “venue project,” after the statutory term for the voter-approved venue tax subsidizing a new Paul Tyson Field, Lake Air Little League complex, and primarily funding the Base and other upcoming Extraco Events Center work.

“Lions Park isn’t within the venue boundaries, but we kind of have a built-in group that has been talking,” Holmes said. “Everybody wants to get involved in preserving the history of what Lions Park has been to the neighborhood and to the city.”

“We’ve got a great partnership with the venue project going on and we just want to be able to extend that to what’s happening at Kiddieland,” said Wes Allison, CEO of the Heart O’ Texas Fair and Rodeo.

Allison said the Extraco Events Center shares a parking lot with Lions Park. He said families coming to the events center for youth sports events might also be interested in a park or attraction across the street.

“It’s very complementary for that facility to offer something for those families and kids to do when they’re not playing sports here at our facility,” Allison said.

Waco Parks and Recreation Director Jonathan Cook takes a walk around the Kiddieland site last week. City Council Member Jim Holmes said the carousel stands out as an element many want to preserve as the park is cleared out in preparation for a revitalization project now heading into the planning stages.

Waco Parks and Recreation Director Jonathan Cook stands near the boat ride that shut down after someone stole parts from the park.

The Lions Club will auction off rides, signs and memorabilia from the park before demolition starts.