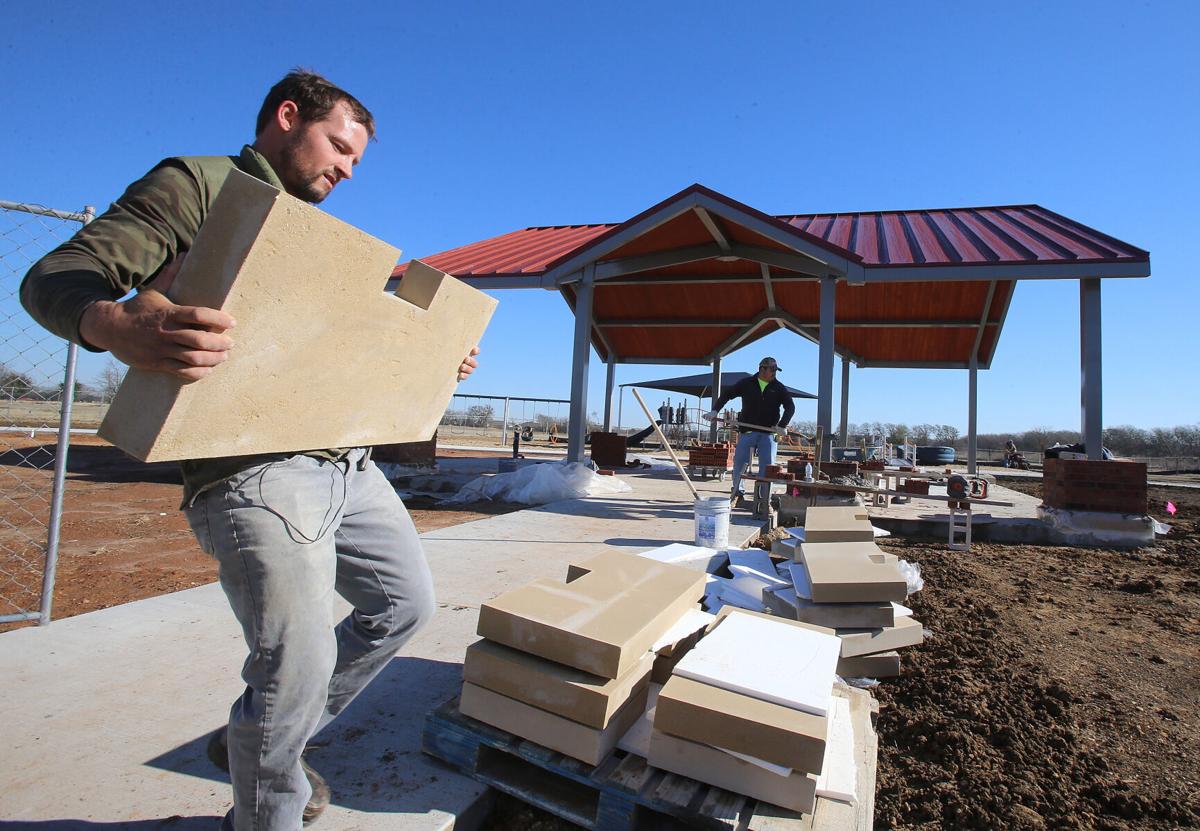 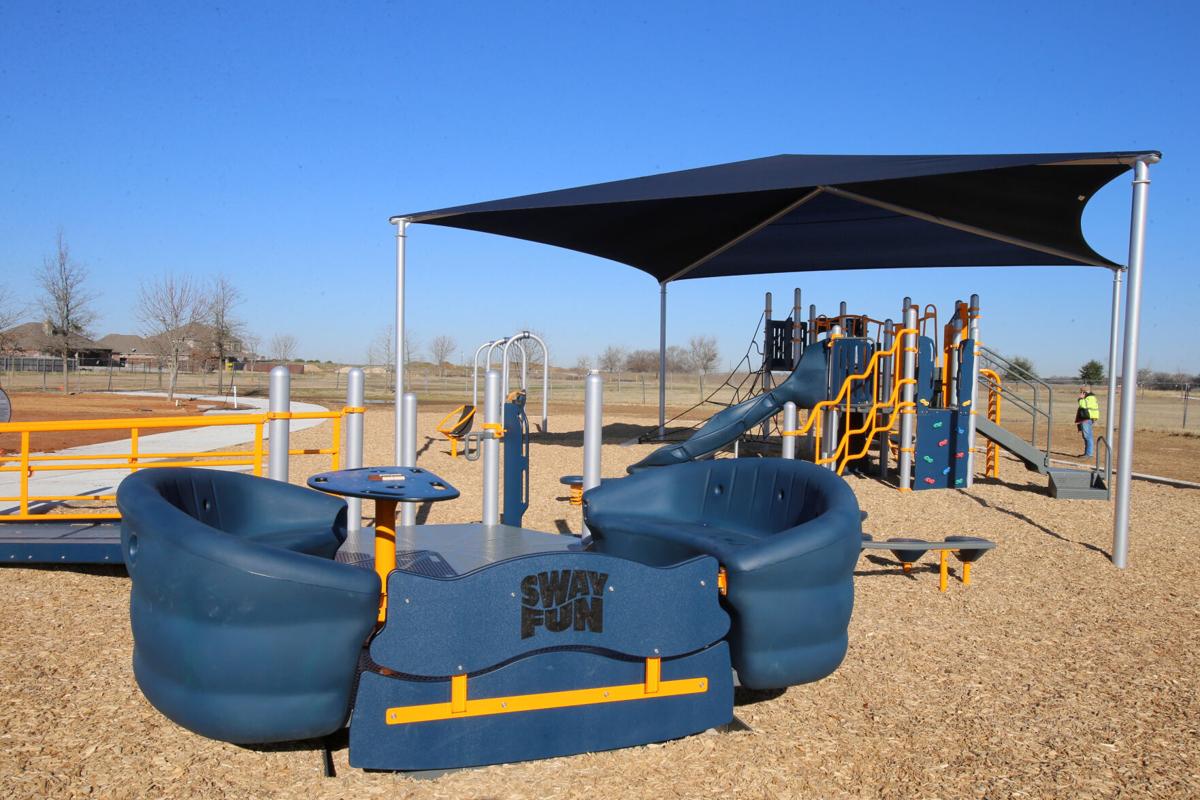 A wheelchair-accessible Sway Fun attraction at Trail Blazer Park allows groups to rock to and fro. 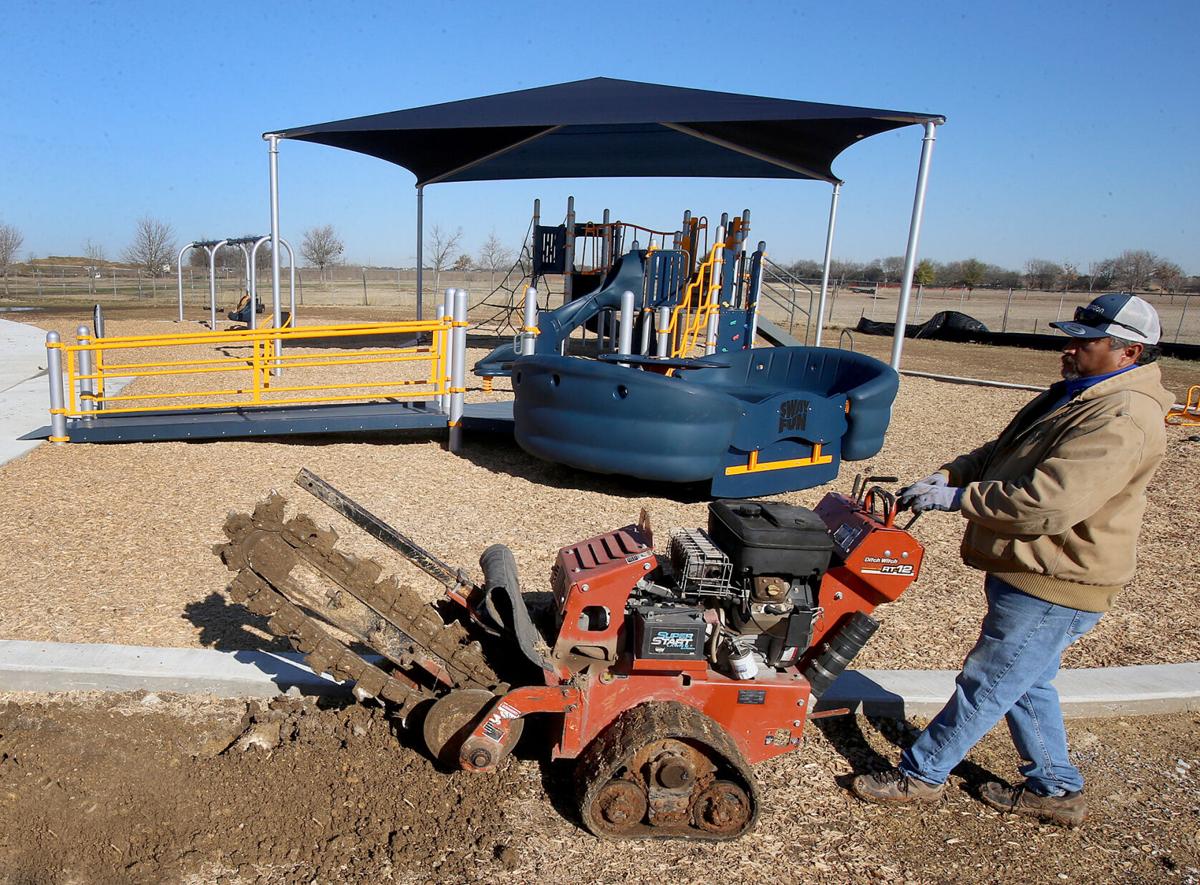 Gilbert Perez with Fitzgerald Landscaping digs a trench for a sprinkler system at Trail Blazer Park. 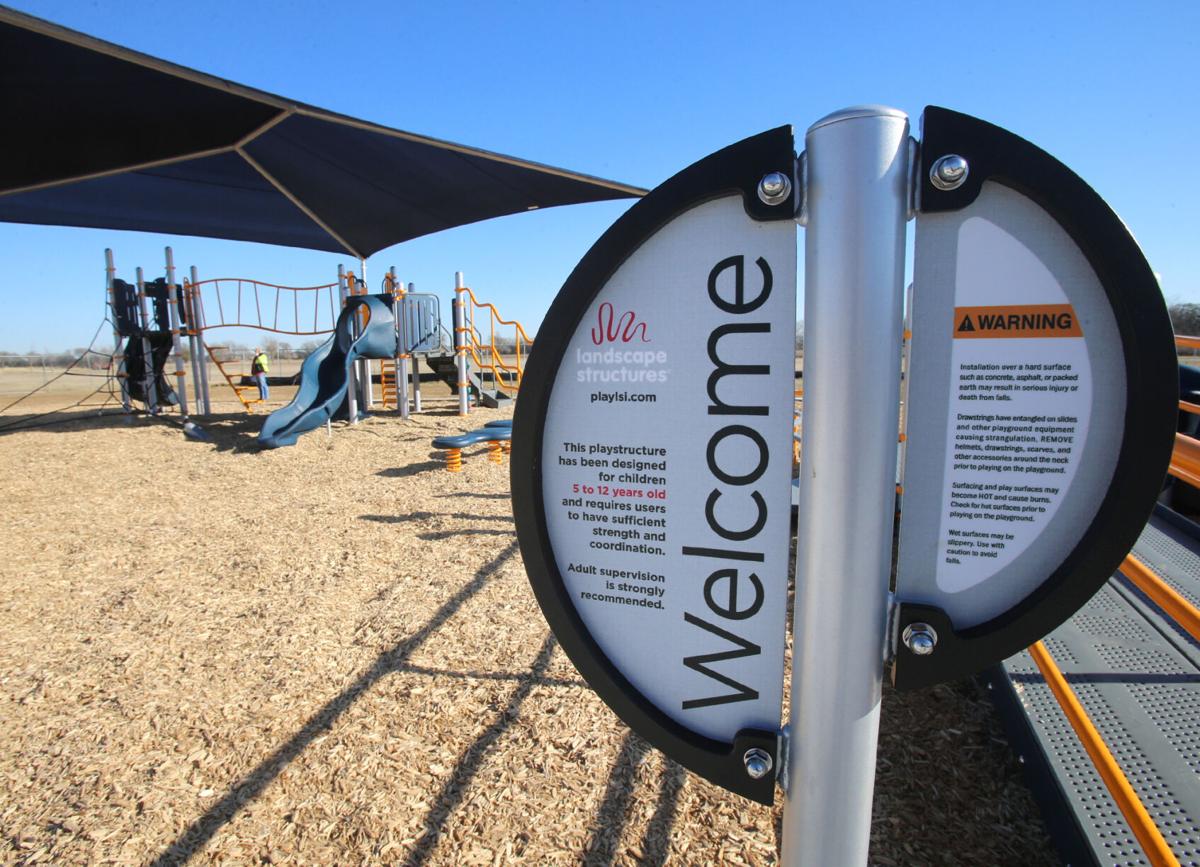 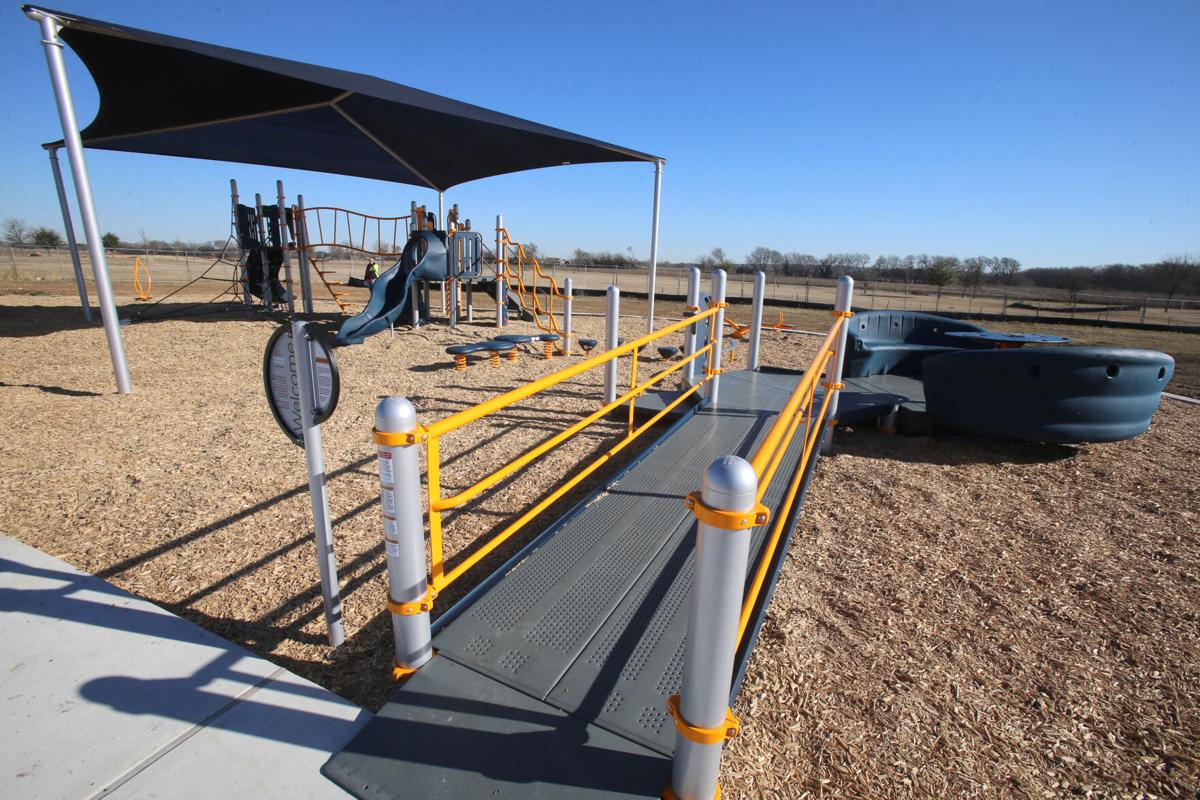 Accessible equipment is part of the playground at Trail Blazer Park. 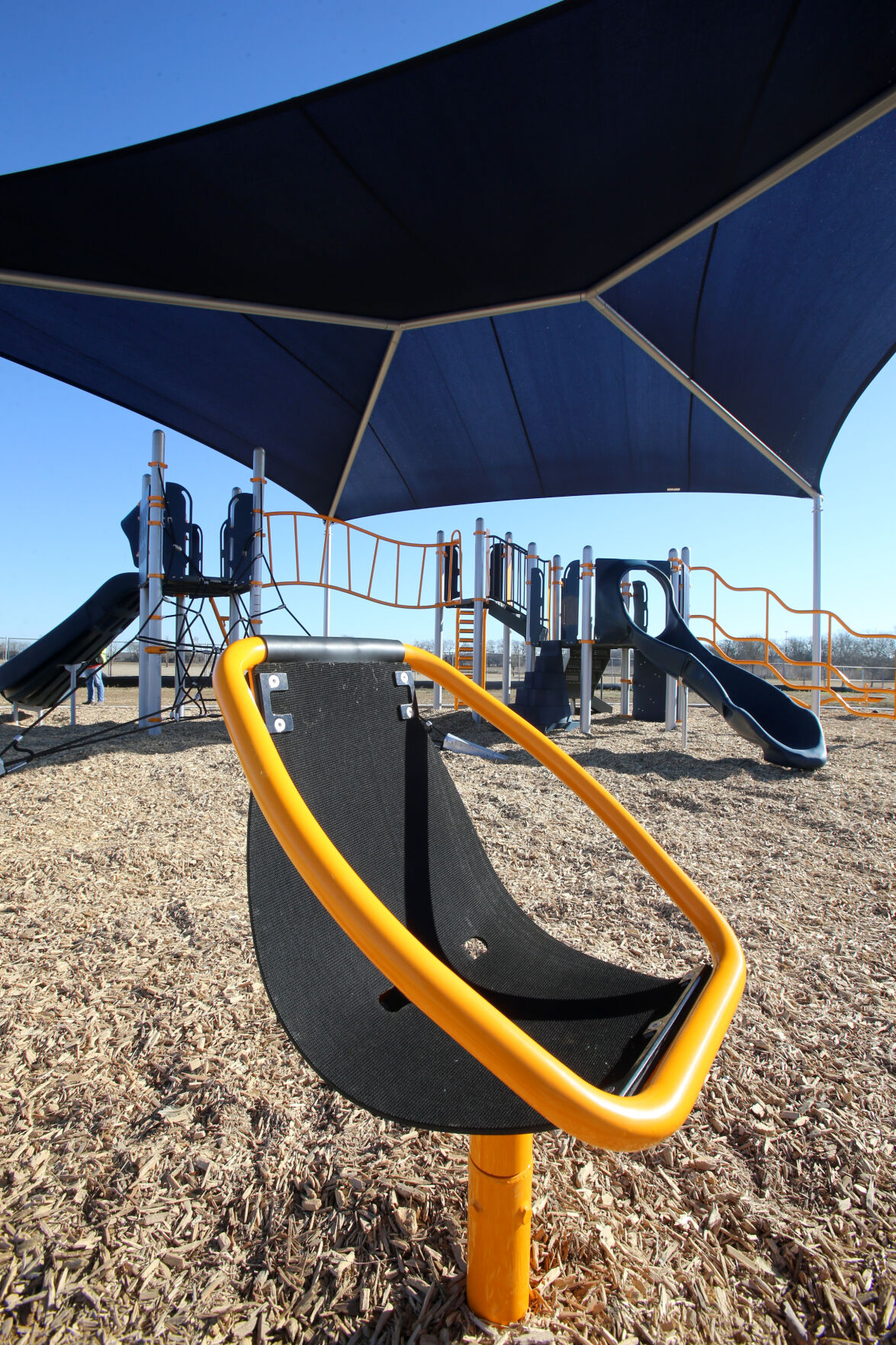 Trail Blazer Park is in the final stages of its transformation from a mere trailhead to a neighborhood park serving families in the fast-growing Highway 84 corridor.

The 18-acre park off Harris Creek Road is set to reopen late this month with the addition of a roomy pavilion, ramps, water fountains, benches, tables and a playground with a shade structure and disability-friendly equipment.

The city of Waco is spending almost $500,000 on the project, including a $350,000 contract with HCS Inc. and the cost of pre-engineered playground equipment and the pavilion.

The park has been in place since 2010, but it has served mostly as a trailhead for the Cotton Belt Trail, with only a small gazebo and a walking path.

The redevelopment will help make it a gathering place for families in the area, said Nathan Embry, president of the Highway 84 West Neighborhood Association, which advocated for the improvements.

“We’re really excited about it,” Embry said. “The reason we started this initiative is we wanted neighbors to be able to come out here and hang out with their families. We wanted moms to be able to push strollers in a safe environment and for kids to slide down slides. The city came through, and it’s a wonderful place.”

The playground has features for users with disabilities, including a Sway Fun structure that groups of people can rock back and forth. A ramp eases access to the structure.

Accessible swings are also available alongside conventional swings for toddlers and older children.

City senior parks planner Tom Balk said public feedback for the parks master plan in 2017 called for more accessibility and shade, and those have been written into standards for new parks.

The city is preparing to get to work on several other park projects, including a playground replacement at Buena Vista Park, land acquisition for a new park in China Spring and a redevelopment of Cotton Palace Park, Balk said.

Meanwhile, the city aims this year to complete a trail master plan that would connect pedestrians across the city. Balk said the Cotton Belt Trail could be part of that future network and could be extended in either direction along the old St. Louis Southwestern Railway, or Cotton Belt.

He said other future improvements at Trail Blazer Park might include a restroom, which this project’s budget did not allow.

Embry said restrooms would be welcome at the park, as would new sports fields.

Wild sheep freed from his own wool in Australia

Wild sheep freed from his own wool in Australia

Halfway point of Waco I-35 project to be marked by lane switch, Brazos bridge opening

Interstate 35 traffic through Waco soon will be rolling on brand new pavement and crossing the Brazos River on a brand new bridge, though last…

Waco-area power outages drop, but thousands still shiver with no end in sight

Watch now: Waco's water system is under “unprecedented” strain and the mayor is pleading with residents to cut back on usage.

More federal aid is available for McLennan County residents struck by the winter storm that blanketed Texas in ice last week, as well as for r…

The city of Waco assured residents Tuesday that rumors of an impending water system shutdown are untrue.

$1 billion in help on the way for Waco renters, others statewide

A wheelchair-accessible Sway Fun attraction at Trail Blazer Park allows groups to rock to and fro.

Gilbert Perez with Fitzgerald Landscaping digs a trench for a sprinkler system at Trail Blazer Park.

Accessible equipment is part of the playground at Trail Blazer Park.