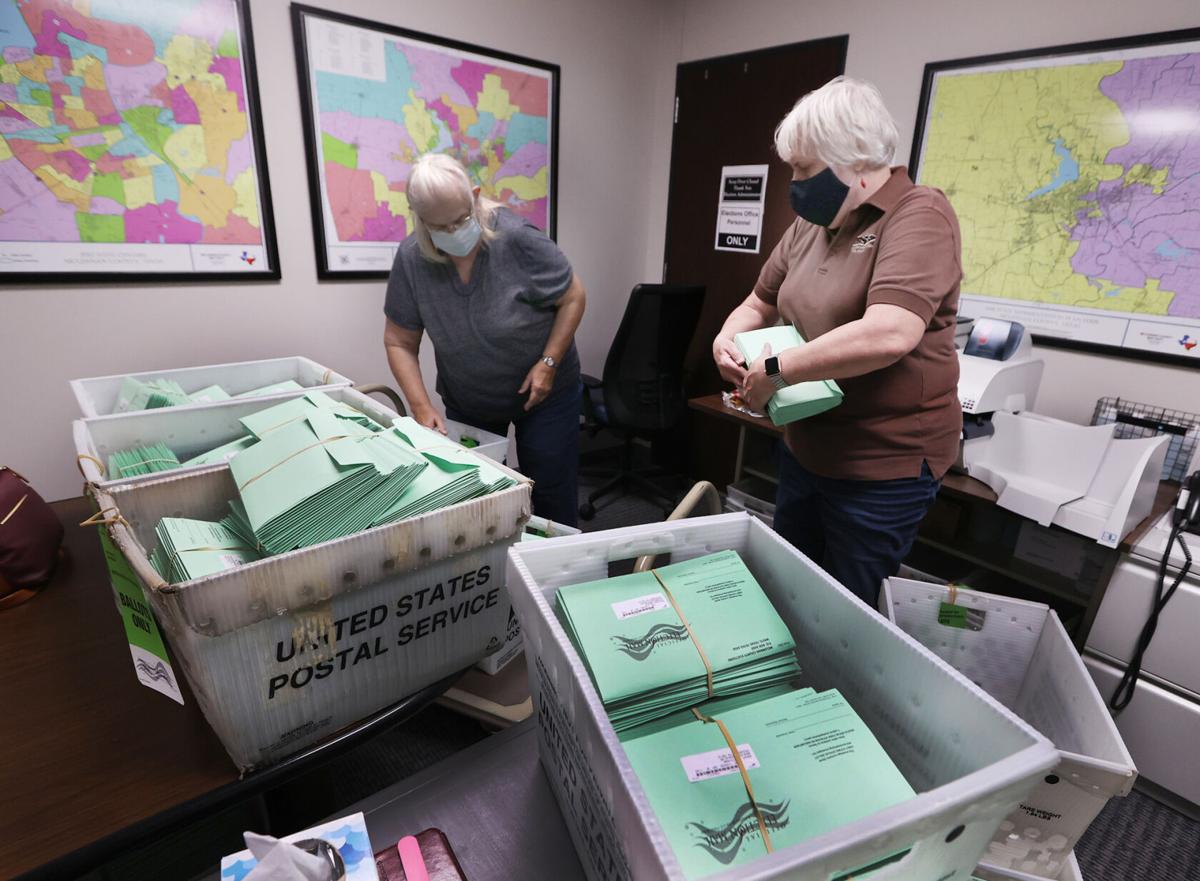 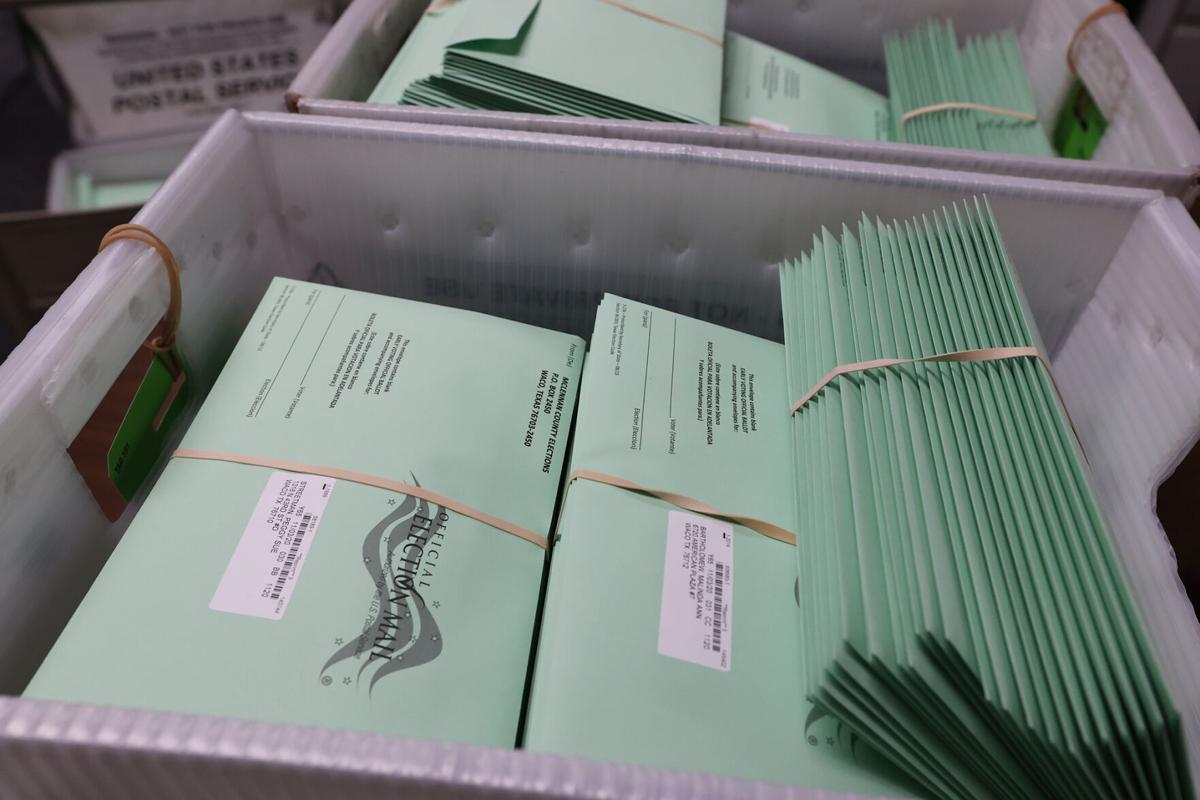 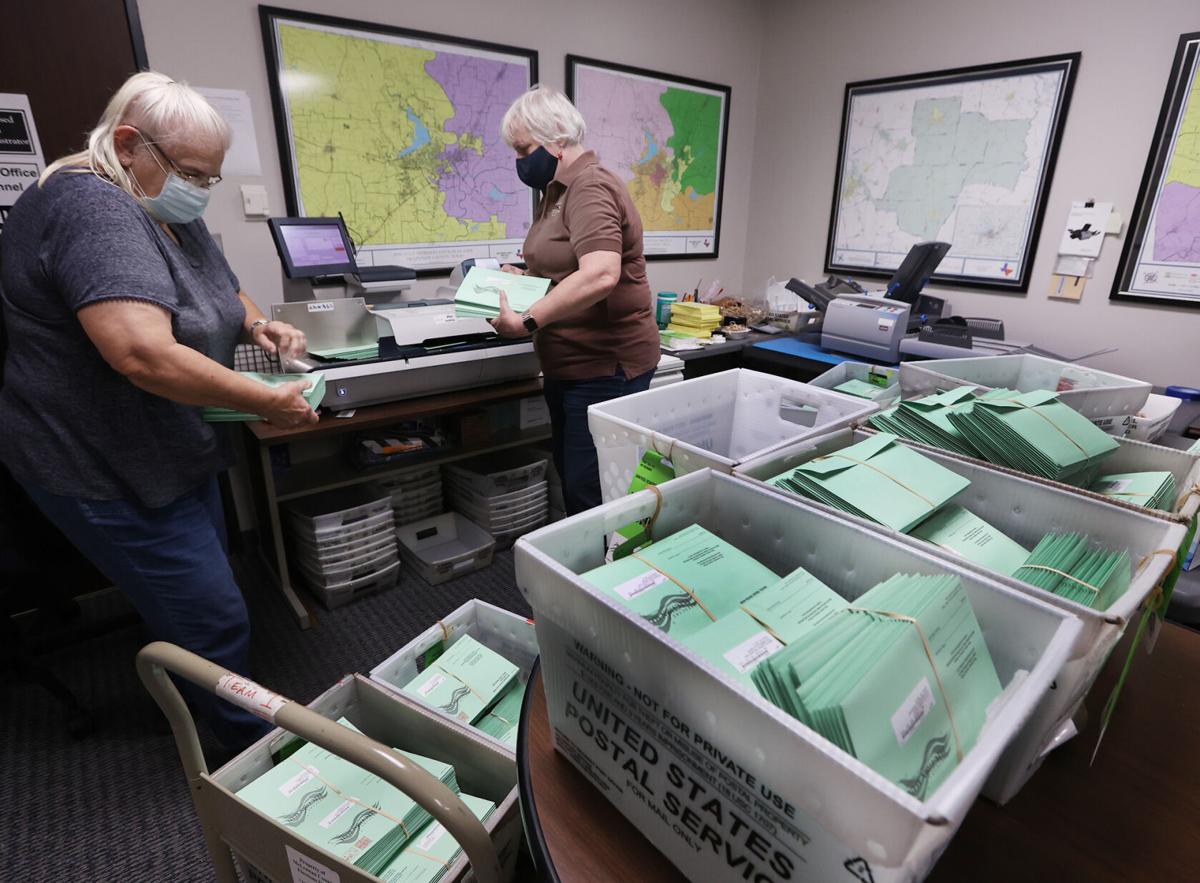 Kathy Van Wolfe, county elections administrator, and her staff had 8,100 mail-in ballots loaded and ready to take to the post office when the high court ruling came down last week, negating hundreds of hours worth of labor.

After the ruling, Van Wolfe and her staff of five went into emergency mode. She hired 10 part-time employees at $10 an hour to assist in the process of reprinting ballots with the three additional candidates, folding the ballots, stuffing them into envelopes, affixing address labels, sending them through postage machines, stacking them in bins, and preparing them to be mailed.

Those new absentee ballots were mailed out Monday, Van Wolfe said, after she and her staff worked all last week, sometimes until 10:30 p.m., and eight hours on Saturday.

For Van Wolfe and her staff, it was just more of the same in a crazy year when extra precautions are being made to ensure voter safety because of fears about the pandemic and politicians playing political football with mail-in voting.

“We have had to destroy ballots with incorrect names in the past, but not this close to the election and not in the same time frame,” said Van Wolfe, who is retiring after the election after 24 years with the county. “We were just lucky we hadn’t put these ballots in the mail. Then we would have had to send voters corrected ballots and they would have been confused about which ballot to return, wonder why they are getting two ballots and everything else. So it would have been a lot of confusion for the voters.”

The extra work for Van Wolfe’s office and those of her statewide counterparts was prompted by the last-minute Supreme Court ruling, which overturned a lower court decision keeping three Green Party candidates off the November ballot.

The lower court sided with Democrats, who were seeking to remove the candidates from the ballot because they had not paid filing fees. The Supreme Court disagreed, ordering that David Collins, a U.S. Senate candidate, Katija “Kat” Gruene, who is running for Railroad Commission, and Tom Wakely, a 21st Congressional District candidate, be added to ballots.

Van Wolfe’s office has an in-house ballot printer, so after securing the proper stock of paper for the ballots, her office added the names to the ballot database. Next they had to test the ballots on the voting machines to make sure they can be scanned through and read on the tally machines.

Ballots cost 25 cents each, and it costs 65 cents to mail each one. The extra printing caused the office to go through two cartons of toner, which cost $500 each, Van Wolfe said. The envelopes inserted into the old packages for return mailings could be used again, but it took time to remove them from the old ballot envelopes, she said.

The county was charged $5,265 for postage on the 8,100 envelopes that already had been sent through the postage meter last week but weren’t mailed, Van Wolfe said, plus the same amount for mailing the new batch of ballots out. That brought the entire extra expense to the county, including overtime pay for her staff, to about $25,000, she said. That money will come from her office budget, which she said she had.

“It’s your taxpayers’ dollars,” she said. “I am really not happy about that.”

Van Wolfe’s office mailed out ballots to military personnel and those overseas voters on Saturday.

Because of the week’s delay in mailing out ballots, it is even more important than ever for those voting by mail to be diligent in marking their ballots and sending them back promptly to ensure they are received in time to be counted, Van Wolfe said. There is plenty of time for that to happen, she said.

The deadline to register to vote is Oct. 5. Early voting will run from Oct. 13 to Oct. 30 at five early voting sites.

Q&A: Voting obstacles around the country and the coronavirus pandemic

What if you need a voter registration form or absentee ballot application and all the normal go-to places are closed or open by appointment only?

It's a problem nationwide.

The most recent American Library Association survey found that 62% of U.S. libraries, which are sources for voting documents, were fully closed while another 26% were offering only curbside service. Likewise, the vast majority of state motor vehicle departments — the largest source of voter registrations nationally and of the voter IDs needed in some states — are operating on limited hours, at reduced capacity or by appointment only, according to the American Association of Motor Vehicle Administrators. Appointments in New Mexico, as just one example, are being scheduled two months out.

Benjamin Hovland, chairman of the U.S. Election Assistance Commission, said 40 states have online voter registration, a particular benefit during the pandemic. The commission has beefed up its website, www.vote.gov, with links to register in all 50 states.

Among states, Ohio has earned points for its creativity. Republican Secretary of State Frank LaRose struck partnerships with grocers and newspapers to distribute absentee ballot applications this spring, and he's tapped breweries to promote voter registration in the fall: "Beer drinking and democracy go together,” he said of the program, noting the pivotal role of pubs in Colonial America.

Perhaps the most pressing worry of most voters is how polling places will be kept virus-free.

A CDC study conducted after Wisconsin’s primary, the first in-person election after states began issuing stay-at-home orders, found 37 of the state’s new COVID-19 cases in the days after the election were among voters, a warning to other states.

As an example of how seriously they’re responding, California issued 50 pages of instructions to its election boards last month calling for site-specific virus prevention plans and extensive training. That's on top of CDC-recommended guidelines that include social distancing, wearing masks and frequent hand-washing.

In Maine, single-use pens have replaced the usual “I Voted” stickers for marking the occasion Nov. 3. South Carolina piloted swabs for touchscreen voting, while Indiana and Louisiana are among states offering latex finger coverings. Voters might see Plexiglas shields at some check-in tables, and poll workers dressed head-to-toe in protective gear. Voting machines and poll books will be sanitized on a regular schedule throughout the day.

Public-private partnerships also are taking shape. Anheuser-Busch, the beer maker, is distributing 8 million ounces of hand sanitizer in coordination with the National Association of State Election Directors and others. Sanitizer is expected to be placed liberally around polling places. In Ohio, manufacturer RB Sigma has donated more than 450,000 surgical masks for use by poll workers and voters.

What if you plan to vote in person but receive a positive COVID-19 diagnosis, and it’s too late to request a mail-in ballot? Or perhaps you’ve traveled out-of-state and gotten held up by a virus-related travel restriction.

Planning ahead to vote early or by mail is still the best way to avoid getting tripped up by a virus diagnosis, quarantine or travel restriction ahead of Election Day, experts agree.

Dealing with voters who are sick is nothing new.

In Alaska, for example, anyone unable to vote in person because of age, illness or a disability can appoint a personal representative to pick up and deliver their ballot.

Many states provide similar options for emergencies — though often not right up until Election Day.

If you simply have no choice, election officials say to show up at your polling place, and you will be accommodated. Separate voting stations, far from the rest, are being set up where possible to accommodate those who know or suspect they’re infected with the virus and decide to self-report.

Ari Schaffer, a spokesman for Georgia Secretary of State Brad Raffensperger, said State Farm Arena in Atlanta is large enough to have a separate voting station for those who have a positive COVID-19 test, though not all polling locations will be.

In Iowa, curbside voting already available to voters with disabilities was expanded to other vulnerable voters during the primary.

Polling locations also were consolidated in some cases into larger venues, such as school gymnasiums, auditoriums and stadiums, to allow for social distancing.

What about unmasked voters?

What if you, or a fellow voter, choose not to wear a mask, as election and health officials are pretty much universally recommending?

States are mostly stopping short of requiring masks on Election Day because voting is a protected right. The most common scenario envisioned is that voters who decline to wear a mask will be offered one. If they refuse it, they’ll be directed to a voting station away from other voters, where possible. In some locations, no other voters would be allowed inside until the person has voted.

Voters will face a different ballot experience in the July 14 runoff as elections officials have changed dates, times, polling locations and t…

A Texas Supreme Court ruling returning Green Party candidates to the November ballot will cost McLennan County some green, as more than 8,000 …