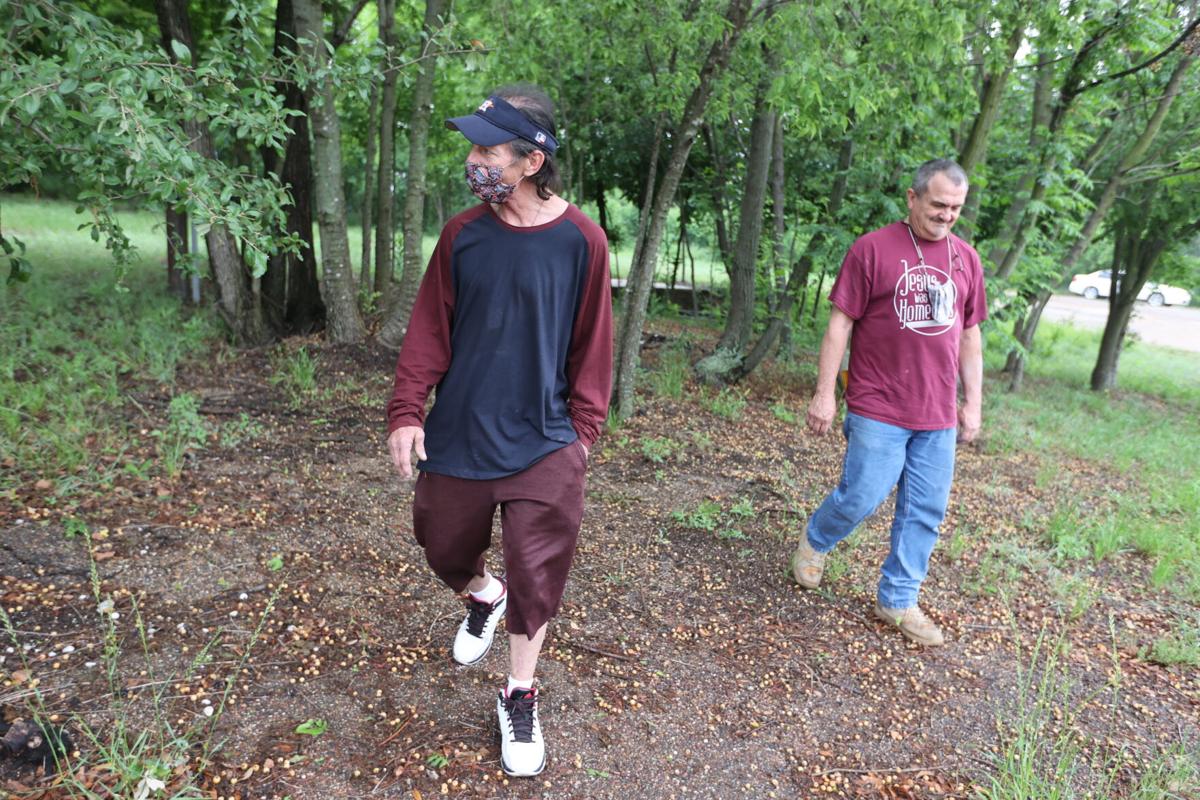 Sidney Wager and Dusty Kirk walk together at The Hangar, a non-profit that helps keep the homeless off the streets. 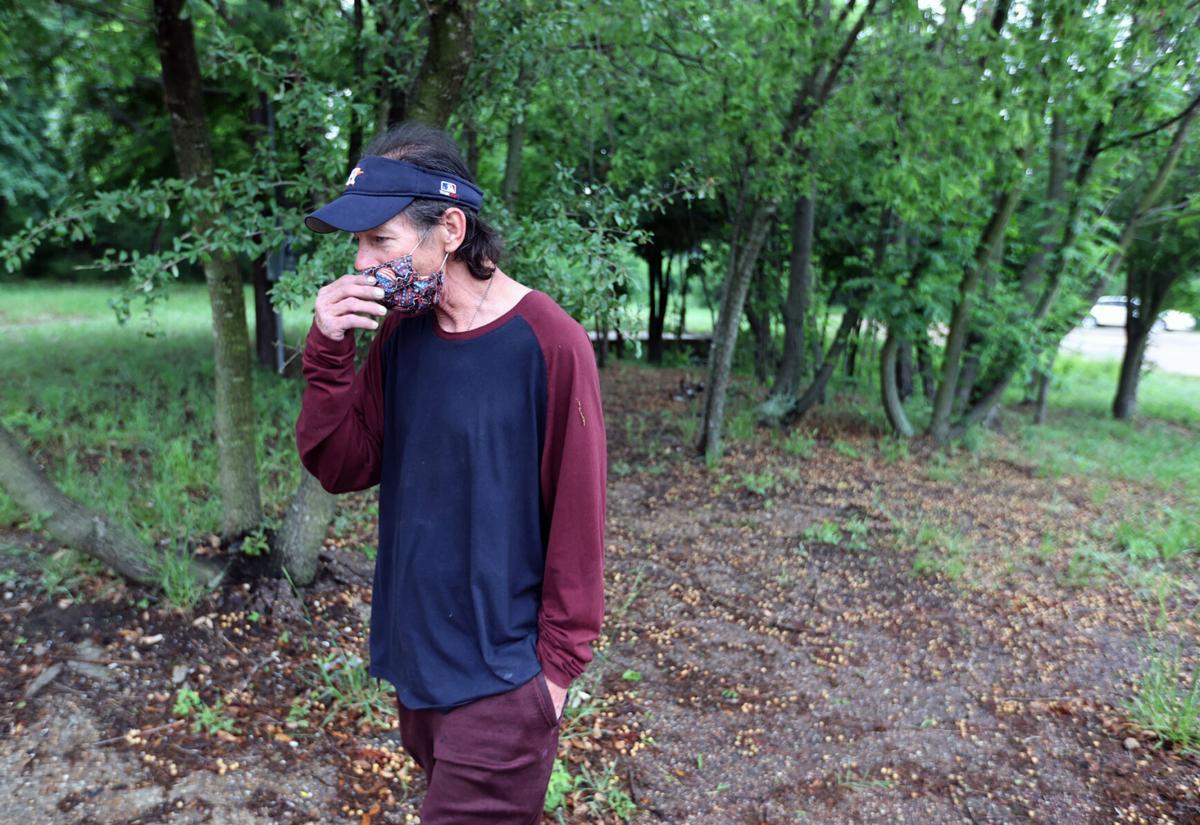 Sidney Wager, 53, said he became homeless after losing his home and belongings during Hurricane Ike in 2008. 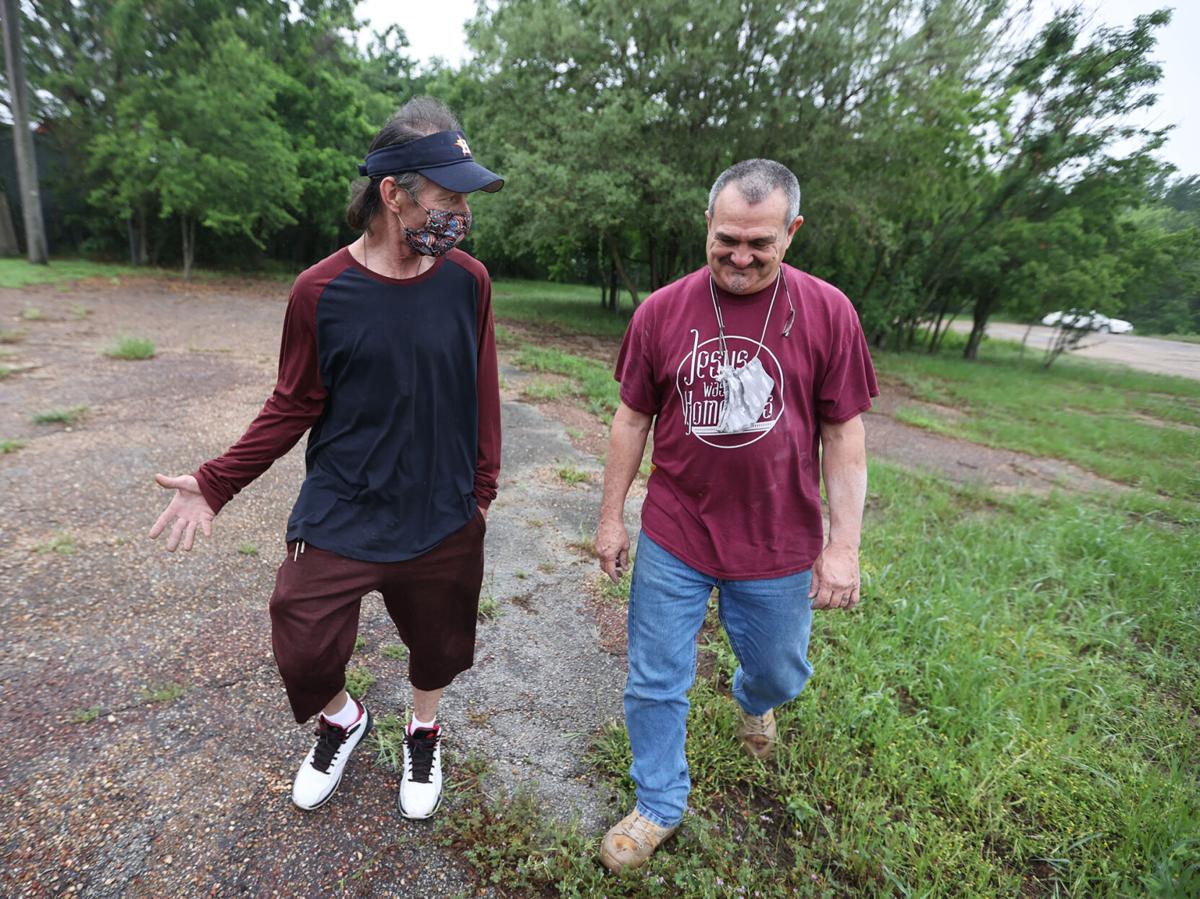 Sidney Wager and Dusty Kirk walk together at The Hangar. The two friends met through Kirk's work with the homeless community.

Out in a small field, reachable only by foot and covered by trees, sheltered away from the public, Sidney Wager has set up his camp among a handful of other people experiencing homelessness in McLennan County.

“I like to be out of sight, out of mind to others. I am not trying to disrespect anybody with my homelessness but I am homeless,” Wager said.

While Wager, 53, prefers to camp outside rather than seek refuge in a shelter, he does not believe large encampments are a good idea for the city.

“You don’t want a large tent city,” Wager said, adding the more people you have together the more issues might arise.

“Other people cause problems, they just do. They want to steal stuff, they want to borrow stuff, it is just not good.”

At Wager’s current site, only five others have set up camp.

Homeless encampments have become a statewide political issue this year as the Texas Legislature is considering passing laws that would ban them statewide. Proposed legislation would also disqualify cities from receiving state grants and funding if they don’t enforce the new law.

This is a response to the increase in encampments in large cities such as Austin. According to KHOU, the city of Austin had decided to lift the ban on public encampments in certain areas in 2019, drawing the ire of Gov. Greg Abbott, who lives in Austin.

House Bill 1925, filed in February, and Senate Bill 987, introduced in March, would make camping in an unapproved public place a Class C misdemeanor, punishable by a fine of up to $500.

HB 1925 failed in the House on Monday but is expected to receive a new hearing date.

State Rep. Barbara Gervin-Hawkins, D-San Antonio, said during the debate on the House floor that she was concerned people would not be able to pay the fines they would receive from camping on public property, which would only sink them into a deeper hole, the Texas Tribune reported.

That is the outcome that the city of Waco is hoping to avoid when addressing encampments.

Officer Garen Bynum, Waco Police Department, said the city isn’t focused so much on clearing out the encampments as they are in providing resources for the individuals living at them.

“There are resources out there that I truly believe would be able to cover a majority of the homeless population that we have here in Waco,” Bynum said.

According to Bynum, before an encampment is cleared out, the police department lines up resources and gives people a notice of when they need to clear the area which is usually a minimum of two weeks. Police did just that in Sept. 2019 with an encampment behind Walmart near Franklin Avenue and New Road.

Arresting an individual who lives at an encampment is never the goal, said Raynesha Hudnell, interim community service director for the City of Waco.

“It is not our intent to place anyone in jail. It is our intent to help individuals get the resources that they need,” Hudnell said.

Dusty Kirk, co-founder of The Hangar, a nonprofit whose goal is to help get homeless people off the streets, said he has seen the police department go above and beyond to work with the homeless when they are forced to clear out encampments.

“They don’t want to give a citation, they didn’t want to hurt the homeless or leave them in a worse situation,” Kirk said. He said he believes a big reason why police haven’t addressed encampments recently is because of COVID-19 and the health risks that could arise from having more people in shelters.

Kirk said he has only really seen police break down encampments when criminal behavior or complaints arise. Bynum says it’s important to address those issues as they are serious to the private property owners and the people they affect directly.

Wager said he got lucky in finding private land to camp at with the owner’s approval. He agrees that if anyone is engaging in criminal activities, they should be removed from the property and arrested.

Wager does believe people should be allowed to camp on public property as long as they do not congregate in large groups or cause problems.

“If you can stand there and not get in trouble for it, I should be able to set up my camp,” Wager said.

For many like Wager, a shelter is not an option.

“My take on it is that they have all been to the shelters and the shelters feel like jail with all the rules and other homeless people in the shelters aren’t nice all the time,” Kirk said. “They don’t sleep well. That is the biggest thing we see. The other thing is substance abuse.”

Shaun Lee, chairperson of the Heart of Texas Homeless Coalition, said the coalition would be against the ban as camps make it easier for them to find people and engage with them, adding there are many reasons homeless people don’t seek a shelter.

“Some find it hard to be in crowded spaces and prefer to stay in encampments,” Lee said. “Also, a large population of homeless individuals that work and often the only shifts available are third shifts and many shelters don’t offer a day shelter offer for those working overnight.”

Wager, who has been able to save up for a truck after getting a job, said balancing work is a big issue with shelters and has experienced it firsthand.

“When I was in a shelter, if I couldn’t make it into a shelter by midnight I couldn’t get in,” Wager said. “My job don’t let me out until 11:30 p.m. and I was out in Lacy Lakeview. I am riding a bicycle, I got to come through Bellmead, it is impossible. I had many nights where I had to stay out all night and still go to work the next day at 3 p.m. The shelter wasn’t working with me and I am working, so I dropped out of there.”

Mental health, substance abuse, lack of support, criminal record, lack of social connection, and wanting to keep their pets are also reasons why Lee believes people prefer to be in camps rather than shelters.

“Some individuals will not step foot in a traditional shelter, they won’t do it, period, for various reasons,” Clark said. “A sense of freedom with nobody telling them what to do and when to do it.”

Instead of clearing out encampments fully, many believe other resources should be considered.

“The main thing that is holding people back from getting out of homelessness is lack of income and lack of housing opportunities,” Lee said.

Clark said the system for addressing mental health issues needs to be addressed before the city can even think to criminalize homelessness.

“If you are going to create a law that criminalizes homelessness but still doesn’t provide for adequate mental health care you are really just blaming the victim,” Clark said.

Kirk suggested city0run pet kennels as a benefit for the homeless to leave their pets at night while sleeping at a shelter, and portable bathrooms near camps as ways the city could potentially help.

In order to address homelessness, Lee believes it is going to take a “citywide effort,” but their resources are a good start.

“I think Wacoans are generally compassionate,” Lee said. “We are just trying to figure out how to help these individuals with the resources that we’ve got.”

He said resources can be found through Projects for Assistance in Transition from Homelessness (PATH), MHMR, The Salvation Army, Mission Waco, My Brother’s Keeper and other organizations..

Should HB 1925 and Senate Bill 987 pass, Hudnell said the city would still focus on doing what it best for residents.

“We would re-evaluate the bill and move forward in a positive way that would benefit the community because the homeless are a part of our community,” Hudnell said.

This unknown detail about Stonehenge might blow your mind

This unknown detail about Stonehenge might blow your mind

New book aims to teach history of US civil rights

New book aims to teach history of US civil rights

After years of requests, residents of the Dean Highland neighborhood have a public playground, albeit a part-time one.

Waco City Council members and city staff may raise wages in the 2021-22 budget year for the city workers who make the least.

McLennan County’s pandemic rental assistance program has received another round of federal funding, and the Waco housing department that admin…

The Waco City Council voted Tuesday to apply for a $1.5 million federal grant that, along with $1.6 million in local spending, would pay for 1…

A $6.6 million plan to convert Franklin Avenue into a two-way street through downtown Waco, previously slated to start as soon as January, cou…

Sidney Wager and Dusty Kirk walk together at The Hangar, a non-profit that helps keep the homeless off the streets.

Sidney Wager, 53, said he became homeless after losing his home and belongings during Hurricane Ike in 2008.

Sidney Wager and Dusty Kirk walk together at The Hangar. The two friends met through Kirk's work with the homeless community.