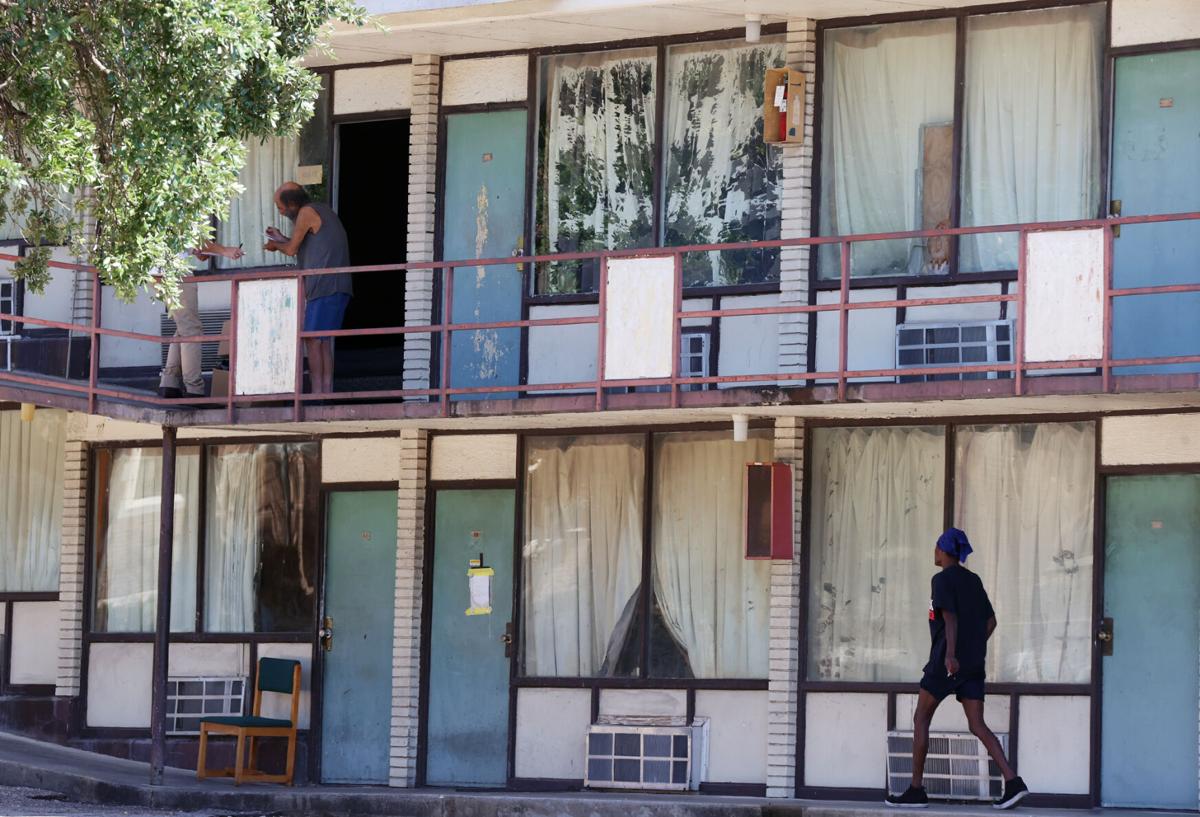 The Waco City Council approved up to $700,000 more in public backing for a development slated to replace the Oak Lodge Motor Inn, bringing the total to $2 million in city grants for the estimated $8.8 million project. Work to prepare for demolition could start as early as next week. 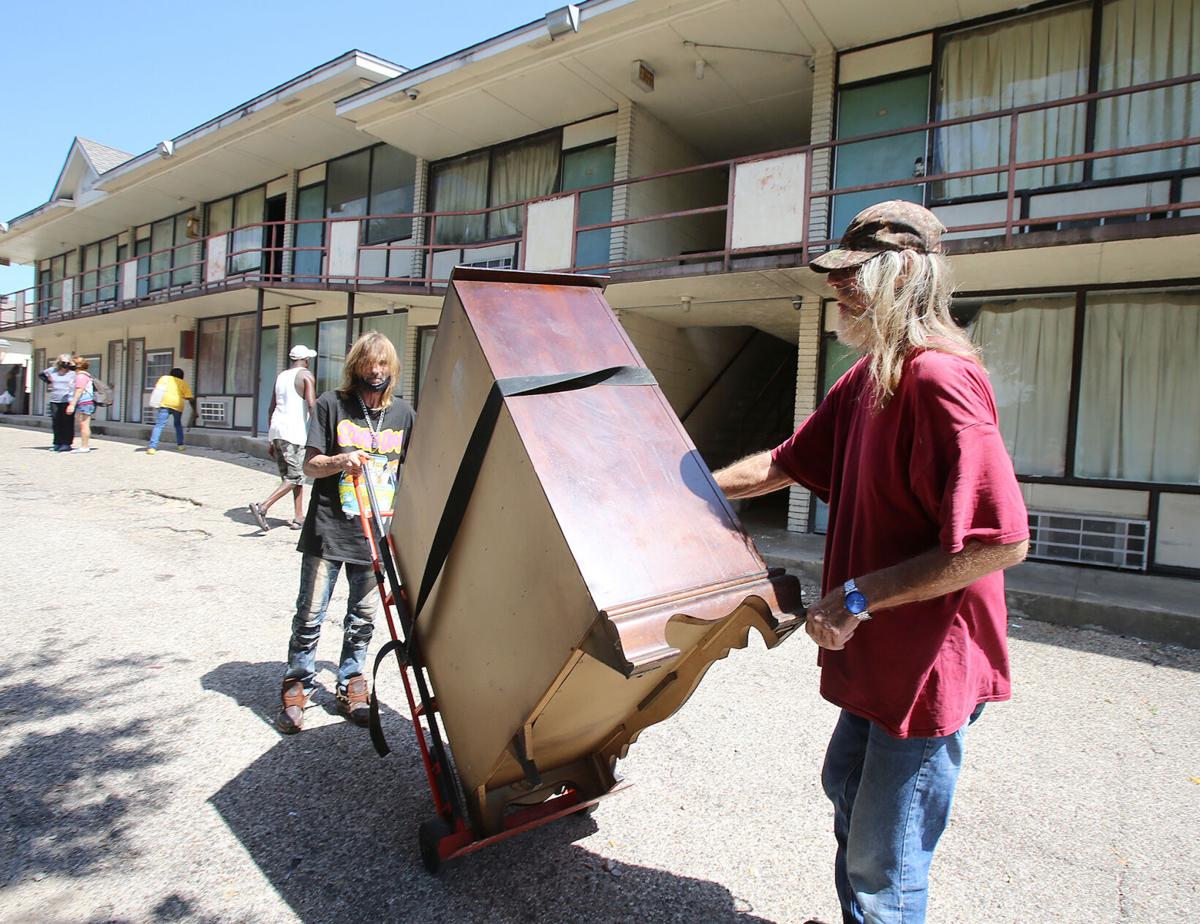 Wilford Barton, who has called the Oak Lodge Motor Inn his home for the past 15 years, right, helps a resident move out last week. Work to prepare for demolition could start as early as next week.

A U-Haul trailer sat in the Oak Lodge Motor Inn parking lot Thursday, a reminder the motel is emptying out as developers planning to replace it with commercial space and upscale housing receive a $700,000 incentive package.

Waco City Council this week approved a Chapter 380 agreement with JKBM Holdings, amounting to sales tax rebates over 10 years. JKBM, which includes local businessman Brian Mitchell and Julius Kramaric, an investor from the Czech Republic, plans to demolish the Oak Lodge building and place there condos, lofts and 7,500 square feet of retail or restaurant space in a development called the Dottie Oaks Condominiums.

The $700,000 pledge, combined with a previously approved $1.3 million Tax Increment Financing grant from the city, gives JKBM a $2 million head start on the estimated $8.8 million project. The $2 million in public backing matches what investors paid for the property at 1024 Austin Ave.

The city council approved a 10-year incentive grant payable to JKBM equal to the city’s portion of sales taxes generated between 2023 and 2032, not to exceed $700,000. Consumers locally pay an 8.25-cent sales tax on every dollar spent, with 1.5 cents going to the city, a half-cent going to McLennan County and the balance to the state.

The city imposed several conditions on granting the $700,000. Developers must level Oak Lodge Motor Inn by Dec. 31, construct seven two-story condominiums with an electric vehicle charger in each garage, construct eight loft apartments, build at least 7,500 square feet of commercial space, and implement solar as part of the project, according to a city council summary. The grant also comes with an Aug. 31, 2022, deadline to make the projected $8.8 million in investments in the development.

Waco will return to the developers all sales tax generated in the first five years of the 10-year contract, and will retain 25% the next five years, up to the cap.

JKBM originally announced it hoped to begin demolition and site preparation by Aug. 31, prompting the city and local nonprofits including Mission Waco and Church Under the Bridge to expedite efforts to find residents new homes.

Kent George, in Waco’s economic development office, said Thursday the old motel is loaded with asbestos and that removal and remediation may take up to two months before demolition begins. The Mitchell Group, Brian Mitchell’s construction company, already has secured a demolition permit.

George said the commercial portion of the development may include a pair of restaurants, one facing Franklin Avenue and another facing Austin Avenue. Or the developers may choose a combination of retail and dining, George said, indicating decisions remain on layout specifics.

Oak Lodge had a bad reputation. One resident preparing to move out called it an eyesore plagued by drug dealing and prostitution, and another said she would watch its demolition with a smile. After a fire in 2019, a city inspection identified 32 code violations.

Still, it occupies what some would consider a prime location. Next door or within an easy walking distance are businesses including Reed’s Flowers, Milk Bottle Cookies, Simply Irresistible, Alpha Omega Grill & Bakery, Cactus Rose and Milo All Day.

Also in the neighborhood are Balcones Distilling, Stumpy’s Hatchet House and the former Tribune-Herald newspaper offices at Ninth Street and Franklin Avenue, now owned by Chip and Joanna Gaines. The couple has announced plans to convert the building to Magnolia’s headquarters.

Report delves into what went right, wrong for Waco during 'minute-by-minute nightmare' of February storm

The Waco City Council approved up to $700,000 more in public backing for a development slated to replace the Oak Lodge Motor Inn, bringing the total to $2 million in city grants for the estimated $8.8 million project. Work to prepare for demolition could start as early as next week.

Wilford Barton, who has called the Oak Lodge Motor Inn his home for the past 15 years, right, helps a resident move out last week. Work to prepare for demolition could start as early as next week.