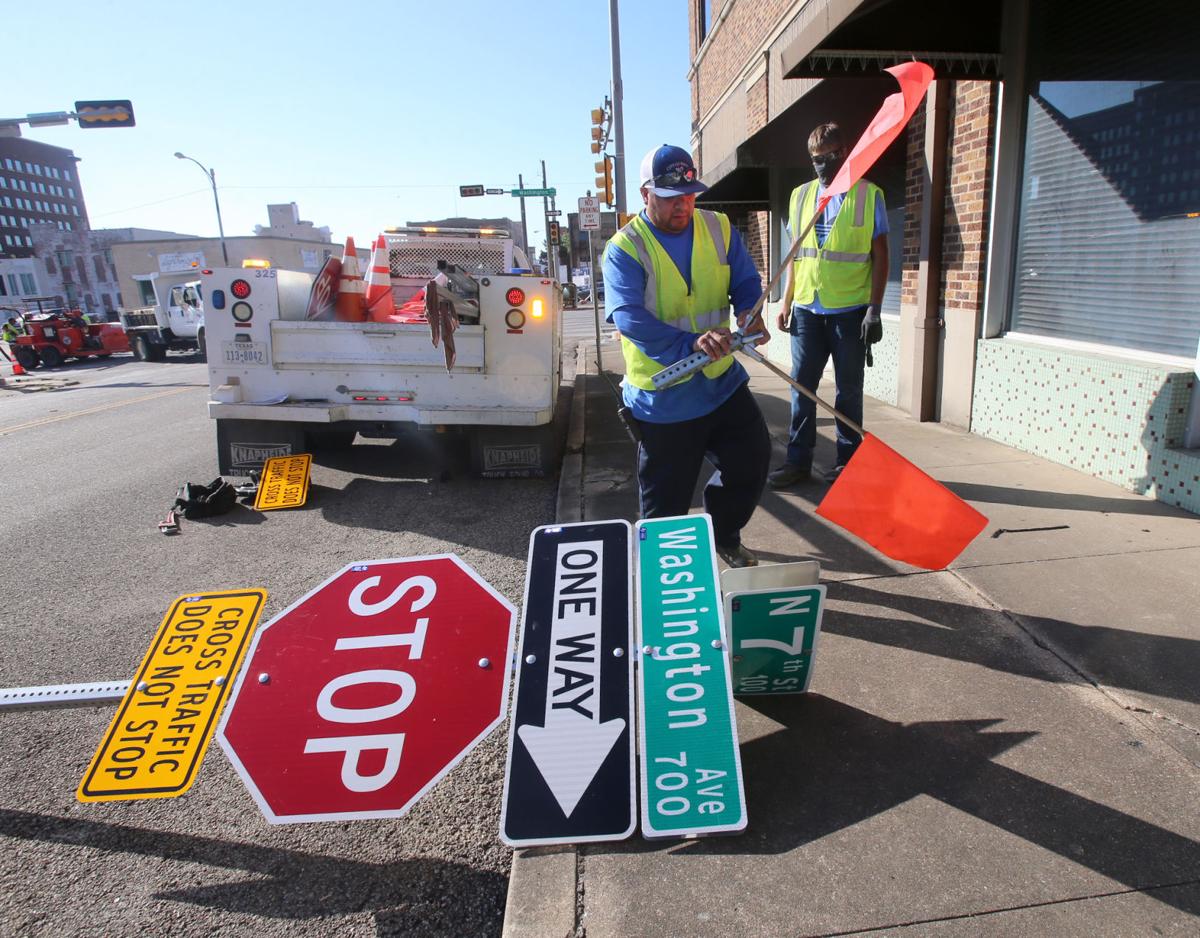 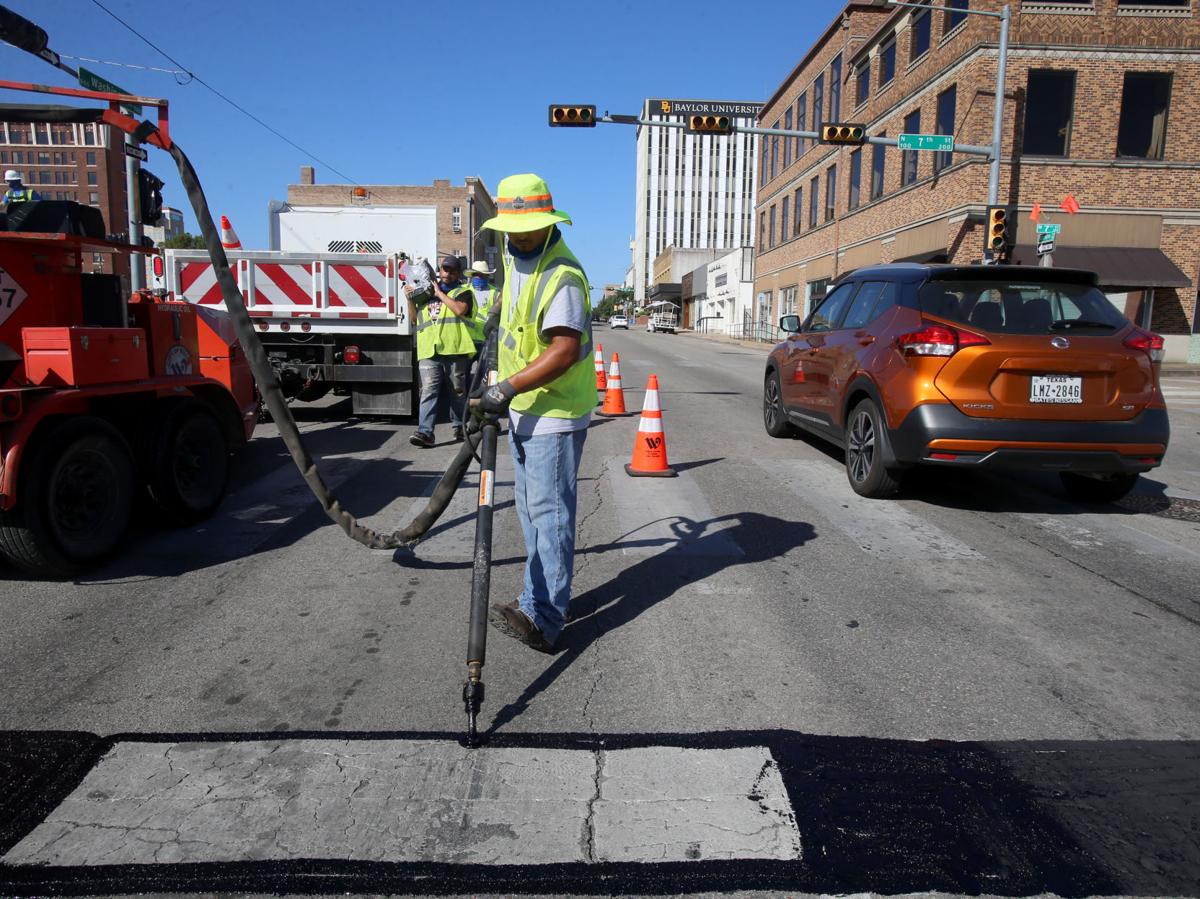 Waco streets and traffic employees remove the stop line on Washington Avenue at Seventh Street in preparation for taking down the traffic signals. 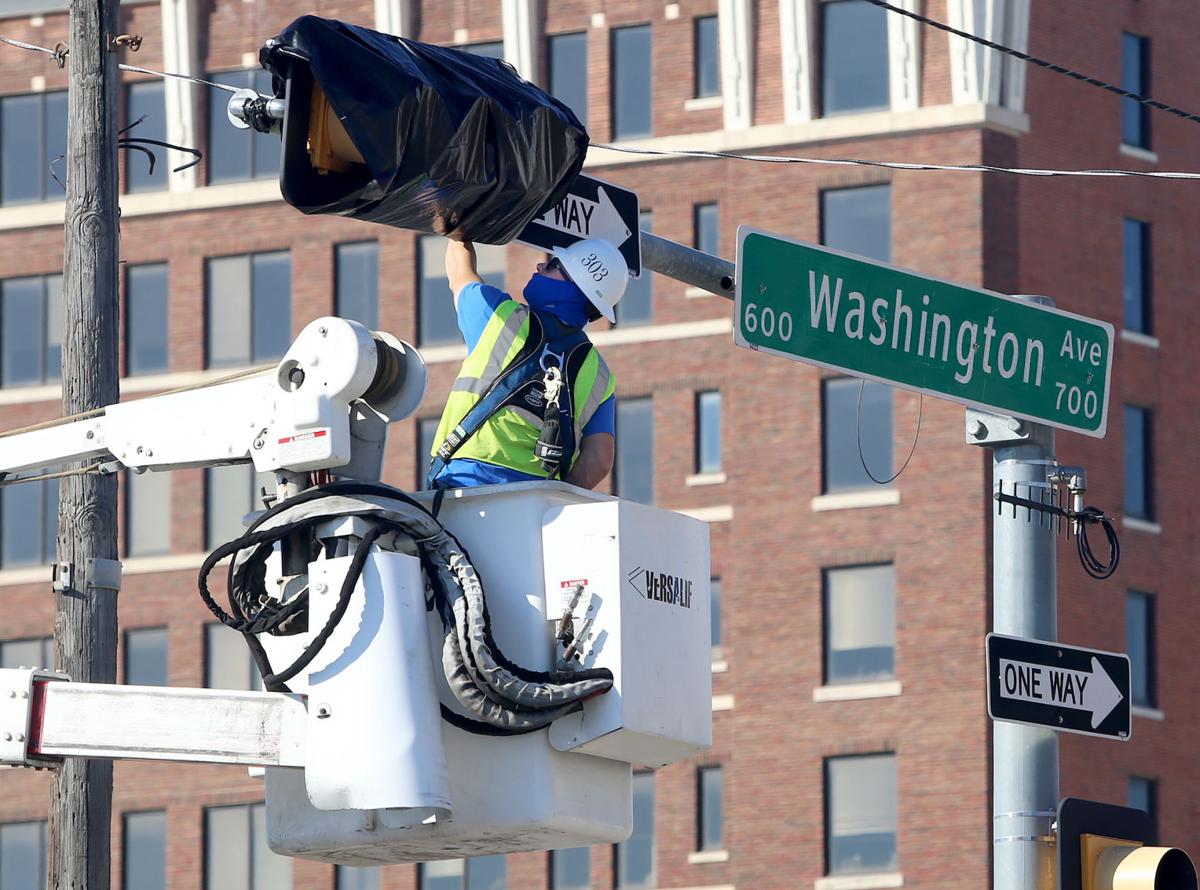 A traffic division employee with the city of Waco bags the signal lights at Seventh Street and Washington Avenue.

Traffic lights on Washington Avenue at Seventh and 12th streets have been replaced by stop signs, and the stops will disappear when the project to turn the road two-way begins this fall.

Waco’s traffic and streets divisions began removing the lights July 17, as a precursor to the Washington Avenue two-way conversion, which has been in the works since 2018. The stop signs will eventually be phased out, but the road will remain one-way until construction is complete. Jim Reed, city of Waco capital improvement program manager, said the stop signs are less jarring for drivers than removing the stop lights with no warning.

“We’re just trying to give people enough notice, so they don’t potentially run a signal if it goes into flash mode or something like that,” Reed said.

The road will accommodate two-way traffic until all construction is complete.

Waco City Council voted to reject all bids for the project during its June 16 meeting on the recommendation of the city’s public works staff and Walker Partners, the firm handling the engineering work for the project. Assistant City Manager Paul Cain, who oversees public works, said the project will be rebid in September and head back to council in October. Walker Partners is scheduled to wrap up the engineering phase in September.

Reed said eliminating the traffic signals at Seventh and 12th will take roughly one month and shave about $300,000 off of the total project cost.

“One of the biggest cost items we had within the Washington Avenue bid was the cost for traffic signals,” Reed said. “Just for those line items alone was well over $1 million.”

Reed said while the change will take some getting used to, removing the traffic lights will be better for traffic flow on Washington Avenue in the long run.

“It will also enable us to queue up traffic for longer distances and it won’t overlap between intersections,” Reed said. “It’s not very far between one intersection to the next, it’s just kind of how the downtown is laid out. It will actually create a better flow to traffic, without having to potentially stop at multiple lights going through there.”

The traffic division will handle the signal work and the streets division will patch the concrete and sidewalks afterward. Traffic signals at Fifth, Sixth and 11th streets will be included in the request for bids.

The city’s original cost estimate for the project was $2.9 million. At a February meeting, the engineer’s estimate came in at $4.5 million, and the lowest bid afterwards was $5.2 million. The project will be rebid with two alternatives the council can take or leave. One would replace a striped median from University Parks Drive to 11th Street with a median physical barrier, and the other would add new signal detection hardware at all intersections with signals.

“The alternates will give us an opportunity for the council to make some decisions, and then if they want to award the alternates we might have to identify some additional funding from other sources,” Cain said.

Waco officials are preparing for COVID-19 vaccine distributions and continuing to learn about what their exact role will be, Mayor Dillon Meek…

Note: Election results are not final until canvassed.

Waco streets and traffic employees remove the stop line on Washington Avenue at Seventh Street in preparation for taking down the traffic signals.

A traffic division employee with the city of Waco bags the signal lights at Seventh Street and Washington Avenue.