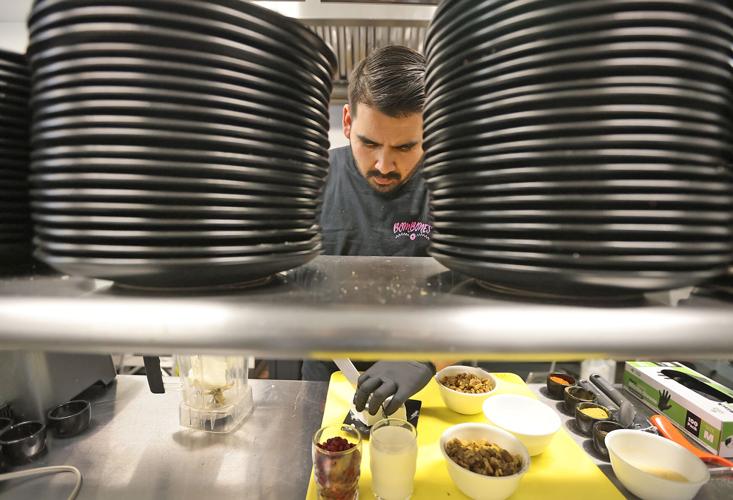 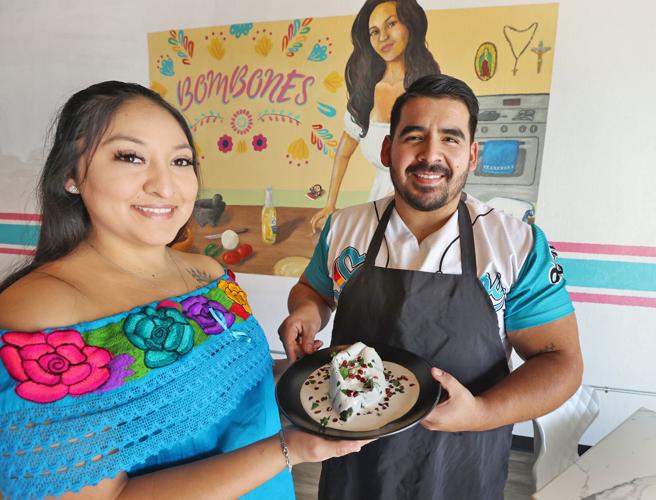 Selina Perez and Jesus Rodriguez hold the chile en nogada they are offering this weekend for Mexican Independence day at Bombones Mexican Cuisine.

The co-owner of the new Bombones Mexican Cuisine restaurant in downtown Waco roasted giant poblano peppers and stuffed them with a mixture of ground meat, fruits and spices.

He peeled and ground walnuts and mixed them with goat cheese and sherry for a white sauce he poured over the chiles. Then he garnished the whole thing with ruby-colored pomegranate pieces and green parsley. The result: the red, white and green of the Mexican flag, waiting to be savored.

That process is based on a 200-year-old recipe for chiles en nogada, the national dish of Mexico, which is as daunting to make as it is delicious to consume. Rodriguez made the recipe 10 times before rolling it out Friday, known in his native Mexico as Dia de la Independencia. He and co-owner Selina Perez will offer the dish through Saturday at the restaurant at 12th Street and Washington Avenue, where they specialize in authentic regional Mexican cuisine.

Rodriguez said he wanted to get the dish right before introducing the piece of Mexican heritage to Waco.

More important, he wanted to do his mama proud.

His mother, Juana Rodriguez, started Mexican food restaurants in Mt. Calm and Elm Mott, and she would make chiles en nogada at home every September.

Bombones, which opened in August in the renovated former Wilkirson-Hatch-Bailey Funeral Home building, aims to expand Waco diners’ horizons beyond Tex-Mex into the diversity of Mexican cuisine, the owners said.

“We wanted to give Waco a cultural connection as far as our Mexican culture,” said Perez, who oversees front-of-house operations. “There’s a variety on our menu, from Oaxaca, from Puebla. We want to keep it as close to the culture as we can and make sure it comes out warm and fresh. We love it when someone says, ‘It’s like being at my grandma’s house.’’’

Perez is a Hillsboro native whose family is from the Central Mexican state of San Luis Potosi. She and Rodriguez worked together in food service management years ago and decided to partner in their own venture, she said.

Rodriguez was born in the state of Mexico near Mexico City. He moved to Central Texas at age 4 with his family, attending school in Crawford and West while learning from his mother in the kitchen.

“My mom is the one who inspired all the cooking,” he said. “I came from a family of six. Her being able to cook with so little resources, to cook for a big family with very simple ingredients, that’s the thing that stuck with me.”

Rodriguez honed his cooking skills at restaurants such as Moroso Wood-Fired Pizzeria and learned the financial and management side of the business at chain restaurants before plunging into restaurant ownership.

In a town full of Tex-Mex and taco stands, Bombones aims to stand out as a sit-down restaurant with homemade tortillas and hard-to-find specialties prepared to order. Those include tortas ahogadas, which is a juicy carnitas in a roll; or huaraches, a long piece of blue-corn flatbread topped with beans, meat, queso fresco and Mexican cream.

The dinner menu includes ribs in a chile verde sauce and Veracruz-style fish with capers and olives. Specials have included chipotle meatballs and chicken in green mole with pumpkin seeds. Future specials will include cochinita pibil, an orange-flavored pork dish from the Yucatan, as well as aguachile de sirloin, a steak chopped and marinated with lime, onions and peppers.

Rodriguez said he believes he is the first Waco restaurant to offer chiles en nogadas, a storied dish that supposedly originated in the city of Puebla between Mexico City and Veracruz.

Legend has it than a convent of nuns in Puebla prepared it on Aug. 28, 1821, in a feast for Mexico’s first emperor, Gen. Agustin de Iturbide, though some historians say the concept dates back much earlier, according to a Sept. 7 Washington Post article.

Rodriguez’s version uses roasted peppers instead of battered ones and is stuffed with a picadillo of ground beef, apple, peach, potato, carrot, garlic, onion and cumin.

“The flavors are very strong,” he said. “They stay on your palate for a while. A lot of people come in and say, this is Mexican food.”

Mystery shrouded the case of a McGregor man accused of killing five people Thursday on his block in McGregor, but hundreds of anguished residents of this town of 5,200 west of Waco gathered to comfort the orphaned survivors.

Bellmead police Saturday arrested an 18-year-old man who was accused of entering a woman’s hotel room and raping her.

The brother of a woman killed Thursday in McGregor, along with two of her children and two of her neighbors, said his sister was dedicated to …

A man was in jail on an intoxicated manslaughter charge after striking a travel trailer with his car Sunday afternoon in Robinson, causing the…

Cowboys on horseback in downtown Waco this weekend will herald the return of the 70th annual HOT Fair and Rodeo, which will feature tried-and-true attractions and a few new ones.

Raegan King does not fancy herself a mammoth whisperer, but she knows a mammoth tooth when she sees one. She made no bones about the fact 30-y…

Trees and power lines knocked down by Ian 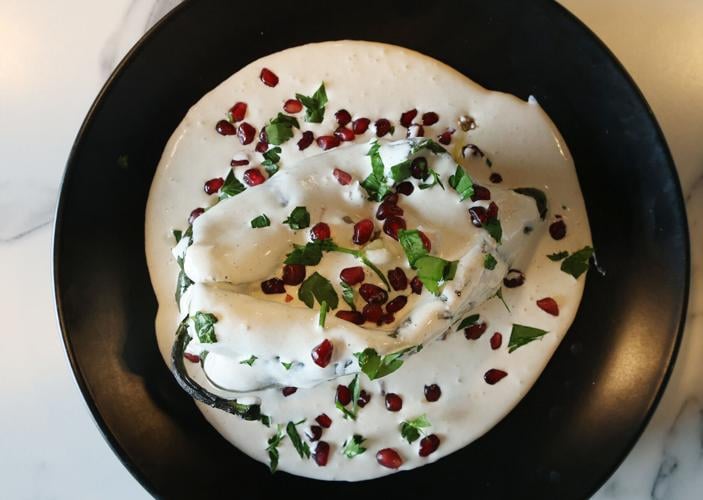 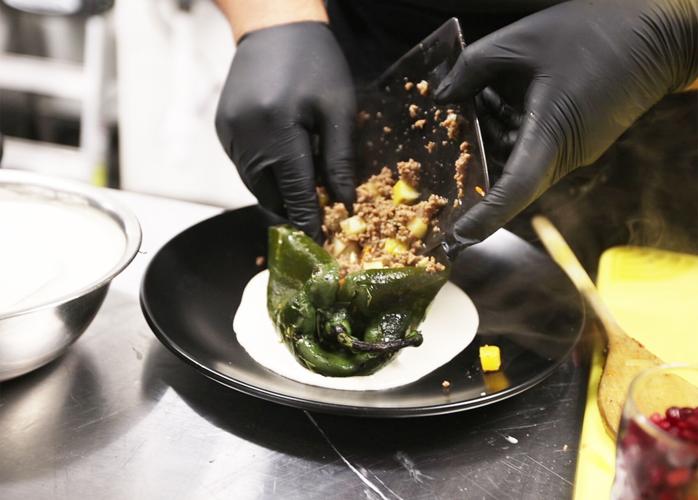 Selina Perez and Jesus Rodriguez hold the chile en nogada they are offering this weekend for Mexican Independence day at Bombones Mexican Cuisine. 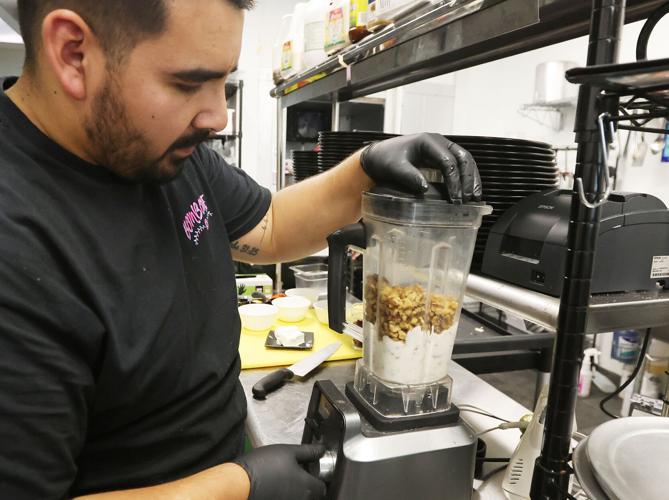 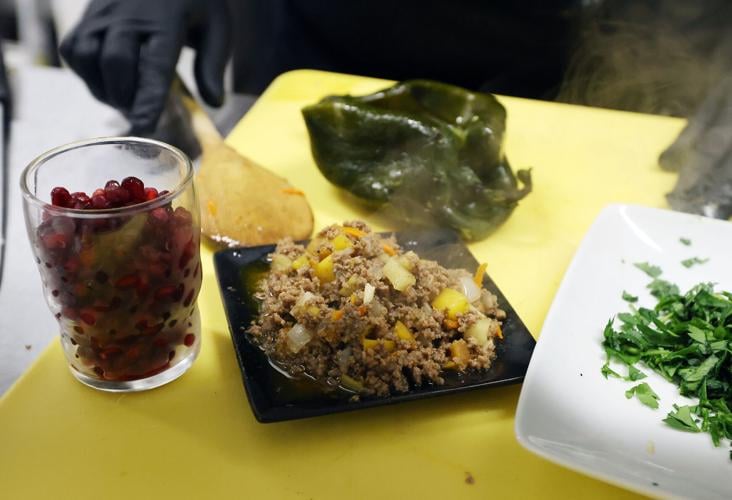 Chiles en nogada ingredients include pomegranate; a picadillo of beef, vegetables and fruit; and parsley. 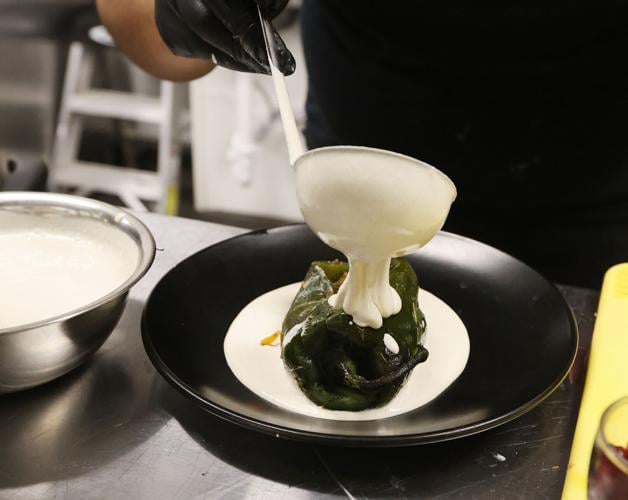 Jesus Rodriguez pours walnut cream sauce over a poblano pepper stuffed with a mixture of ground meat, fruits and spices.